On April 26, no one will hear you scream.

20th Century Fox has announced the return of Alien Day. Set for April 26 -- a nod to planet LV-426 from the films -- the 24-hour event will celebrate the Alien franchise with a series of worldwide fan-focused activities, including a Q&A with the cast of Ridley Scott's upcoming Alien: Covenant.

As part of the celebration, Fox will present a live streaming event, an interactive trivia challenge, worldwide screenings, all-new product launches, special reveals and more. Likewise, fans will also be able to buy the complete Alien Anthology on Blu-ray on April 11. A Wal-Mart and Walmart.com exclusive version with four limited-edition Mondo Alien movie poster cards will also be available on April 18. 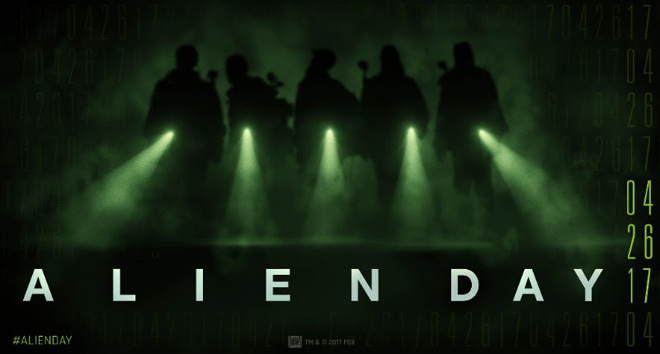 Here's a rundown of the major Alien Day activities announced so far per the press release:

- ALIEN DAY livestreaming event at Fox Studios in Los Angeles: Beginning at 10 a.m. PDT on all ALIEN social channels and on the newly launched ALIEN Universe Hub (www.AlienUniverse.com), fans can interact with the cast via a question and answer session as well as view multiple behind-the-scenes segments highlighting the making of ALIEN: COVENANT.

- Global One-Night Screening Event: Screenings of Ridley Scott’s original 1979 ALIEN starring Sigourney Weaver and his 2012 follow-up PROMETHEUS will be held across the globe on ALIEN DAY.  At participating RPX Regal Cinema U.S. theaters and worldwide partners, fans can watch these sci-fi thrillers and be treated with exclusive content from ALIEN: COVENANT and a one-of-a-kind commemorative item. Participating locations will be listed on www.AlienUniverse.com.

- The “MU/TH/UR of all ALIEN Trivia Challenges”: Returning for only 24 hours on www.AlienUniverse.com, Fox will unveil a new quiz every 4 hours and 26 minutes. Fans will answer a series of rapid-fire questions for a chance to win a VIP trip to Ridley Scott’s upcoming Imprint Ceremony at TCL Chinese Theatre in Hollywood and incredible prizes.

- Fan Art Contest: Submissions for a Fan Art Contest are now open at AlienUniverse.com.  The chosen artwork will be transformed into a limited edition t-shirt premium available with the purchase of the ALIEN: COVENANT Blu-Ray and 4K Ultra HD, exclusively at Wal-Mart stores and Walmart.com. Pre Order will start on May 19.

Beyond the Alien Day event, more product announcements, limited edition releases, and exciting unveils are set to take place in the weeks leading up to and through the May 10 theatrical premiere of Ridley Scott's Alien: Covenant.