The complete adventures of trouble yoot Daniel LaRusso and his Karate master and life coach Mr. Miyagi comes home in The Karate Kid Collection. This classic coming-of-age story was a hallmark of the 1980s inspiring countless kids to take up Karate - at least for a couple of weeks. The quality of each entry may have drifted from one film to the next, but with the unexpectedly highly entertaining Cobra Kai series going strong on Netflix, the original trilogy gains new relevancy. Sony brings all three films to 4K Ultra HD Blu-ray with excellent native 4K Dolby Vision transfers and engaging Atmos audio tracks. Bonus features dwindle for each successive film, but there’s plenty to dig into and enjoy. If you’re a fan of the series, don’t miss out - Highly Recommended.

"I don’t often pull this off the shelf but it’s an important piece of the collection. I’m not usually a big fan of the “coming-of-age” drama because more often than not it’s a pretty trite affair. The genre is usually boiled down to an overly simplistic platitude that makes your eyes roll. But there’s something genuine about John G. Alvidsen’s little film. It may be a little too “Rocky with Karate” at times, but the relationship dynamic between the teacher Mr. Miyagi (Pat Morita), and the troubled yoot Daniel (Ralph Macchio) makes this film special. It’s the magic in the bottle the sequels would keep trying to recapture but you can only experience learning “wax on, wax off” once. The sequels are fun for a watch here and there, but three follow-ups and a remake can’t touch the majesty of this first outing.

For a more in-depth take on John G. Avildsen's The Karate Kid, check out our original Blu-ray review written back in 2010."

"You can’t fault everyone involved for wanting to recapture the magic of The Karate Kid. A cultural phenomenon, it was a massive box office success and practically demanded a sequel. While they could have gone the simple “more but the same” route of so many sequels, this outing shakes things up. Leaving Los Angeles for Okinawa (actually shot in Hawaii), Daniel gets to be the fish-out-of-water again learning about a new culture. The focus isn’t strictly about Karate training or tournaments or fights. In fact, the art of Karate actually takes a bit of a back seat to the more important lesson of conflict management. Sato and Chozen frequently challenge Miyagi and antagonize Daniel - but a fight isn’t what Miyagi wants. He wants peace and lives to the openhand ethos of Karate."

"Trilogies rarely end on a high note and The Karate Kid Part III is sadly no exception to the longstanding rule. Notorious for onset turmoil and a script that was far from finished before cameras rolled, it’s a bizarre sequel where the only people who look like they’re having a fun time are the ones who weren’t in the previous films. Newcomers Thomas Ian Griffith as the diabolical industrial polluter Terry Silver, Sean Kanan as the psychotic Karate champion Mike Barnes, and Robyn Lively as Daniel’s plutonic gal pal are the only ones really delivering here. Ralph Macchio looks like he’s doing a caricature of the troubled yoot Daniel while Pat Morita has little of anything to do except look despondent. He may not get a lot of time in the film, but Martin Kove at least looks like he's having a blast!" 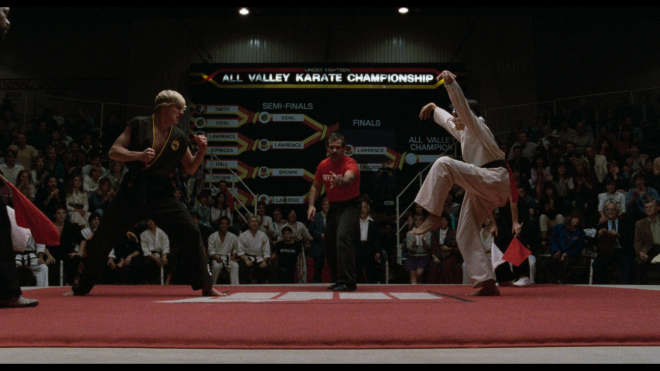 "The notable differences with the Dolby Vision pass over the HDR10 are some improvements during dark shadowy night sequences or bright white locations like inside the Cobra Kai dojo. Black levels are a bit better resolved - like when Miyagi shows Daniel why he’s been working so hard for their first true Karate lesson. Karate Gi’s are a brilliantly crisp white. Primaries red, blue, and yellow have plenty of pop - but I didn’t notice enough of an enhancement there over the HDR10 disc. All in all a fine upgrade, but if this is the only film in the series you love, it’s not enough of one worth buying the full set for." 4.5/5 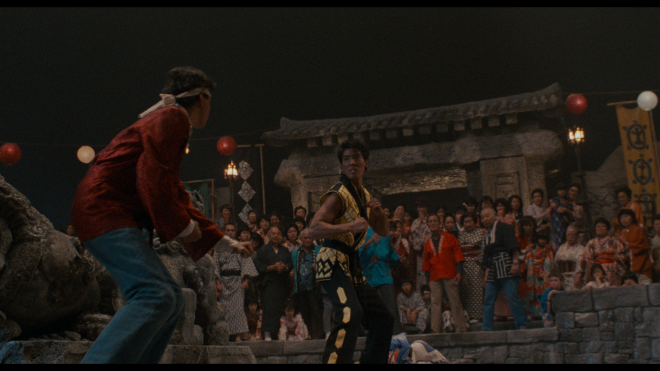 "Not to be outdone by its predecessor, The Karate Kid Part II makes a damned impressive 2160p Dolby Vision debut. Right from the start, the film makes a dynamic presence through the recap footage of the first film to the tournament epilogue where Miyagi faces down Kreese in the parking lot. Detail levels are exceptional. Moving the action out of L.A. to Japan gives the image a different more dynamic setting. The combination of beautiful natural Hawaiian shooting location scenery to the busy bustling streets redressed to look like Japan is impressive. Every little detail is on screen for scrutiny. Film grain has a natural organic appearance without appearing too noisy or intrusive while maintaining a film-like cinematic appearance." 4.5/5 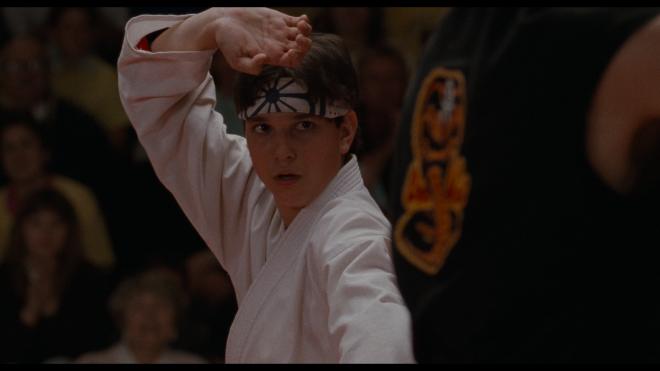 "While the weakest entry in the series, Sony gives The Karate Kid Part III some genuine love on 4K with an impressive 2160p Dolby Vision debut. This outing may not be as sharp and crystal clear as the previous films in this collection, but it’s still pretty damn good. Part of the issue at play here is there is a prevailing haziness that seems to be a production design choice. Interiors at the Cobra Kai dojo often look as though someone was smoking a stack of cigars right before filming so details don’t exactly pop off the screen. The unimpressive locations of this outing compared to the previous films don’t help matters either. Most of the action only takes place in Miyagi’s Bonsai store or the pottery shop - and they look good but there’s also not a lot to absorb. Even setpieces like when Daniel and Jessica harvest the Bonsai tree - the rear-projected background has always been painfully clear and now it’s even more obvious. Thankfully for some key outdoor scenes and the final Karate tournament, the film picks up some visual punch." 4/5 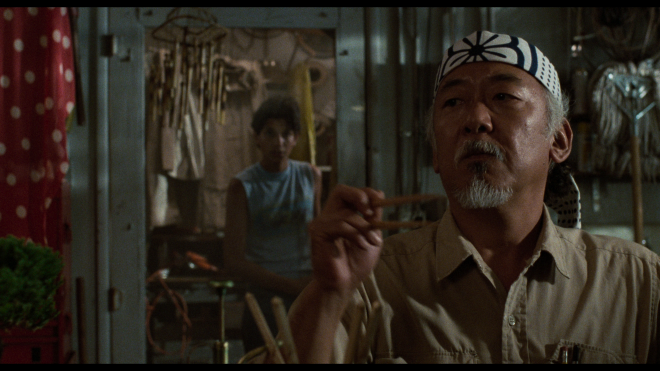 "The mostly front-heavy presentation maintains an attractively wide and broad soundstage with a good deal of background activity spreading across the three front channels and into the off-screen space. Occasionally, some of that activity fluidly moves into the top heights, such as Johnny's gang of motorcycles roaring across the screen, the chirping of birds in the distance or the chatter of the audience sitting at the tournament, and Bill Conti's score also enjoys the extra breathing room by bleeding into the overheads. With excellent precision and definition in the mid-range, the score, song selections and few bits of action reach the higher frequencies with outstanding acoustical detailing while maintaining great fidelity and warmth. The surrounds are put to good use as atmospheric effects nicely extend the soundfield with the cheers of spectators in the last quarter of the movie. While dialogue reproduction is superbly clear and intelligible throughout, the low-end is adequate and appropriate for a teen drama with some appreciable weight in the music." 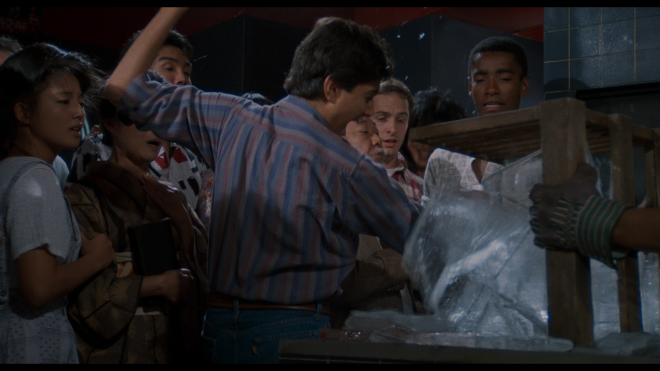 "Like the first film, The Karate Kid Part II comes with an impressive Dolby Atmos mix. As far as the usage of height and space elements, I actually like this mix better than the first film. The beautiful scenic locations allow the film to sound big and spacious. When Daniel tries his twisty drum move with the fish hook, that’s a great effect with overhead activity moving down through the front/center channels and back up into the heights. Likewise, when there are big crowd scenes there’s a lot of raucous activity throughout the channels - Daniel breaking the ice, the big final battle with Chozen, and everyone is twirling their drums are highlights. The big typhoon sequence is a pretty damned impressive wall-to-wall sequence where every channel is active with distinct audio effects. Throughout dialog is clean and clear without issue. The classic Bill Conti score still hits in all the right places for this mix. All around a great track." 4.5/5 "Much like the visual stylings, the Atmos mix for The Karate Kid Part III isn’t exactly a stunner. It works, it finds places to be active and engaging, but at the same time, a lot of the film’s locations don’t call for a dynamic atmospheric presence or pinpoint object effects. When Daniel and Jessica go after the Bonsai tree and are almost left stranded in the water, the crashing waves and the whirling wind effects open up the mix fully engaging the height and surround channels. Interiors tend to be pretty front/center focused without a lot of surround movement in the soundscape. Some flourishes here and there, but nothing to blow your hair back." 4/5 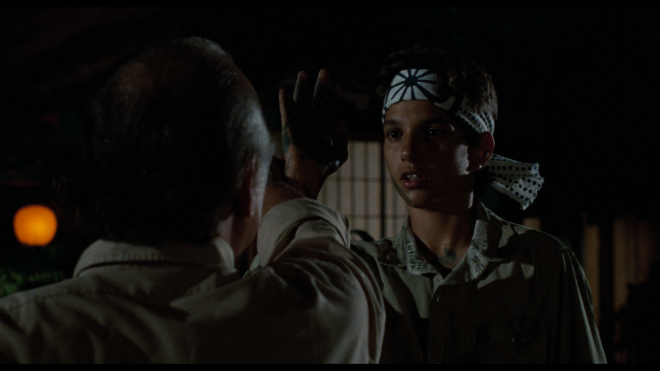 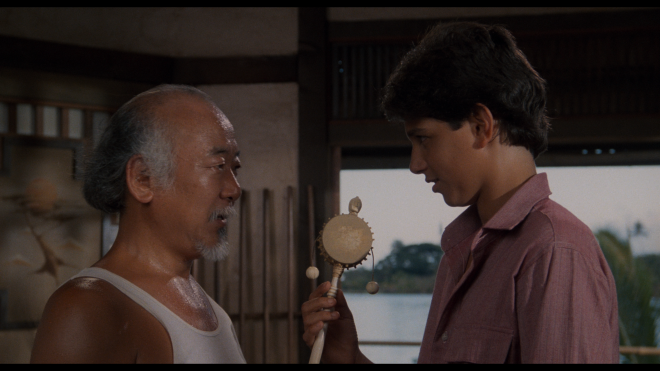 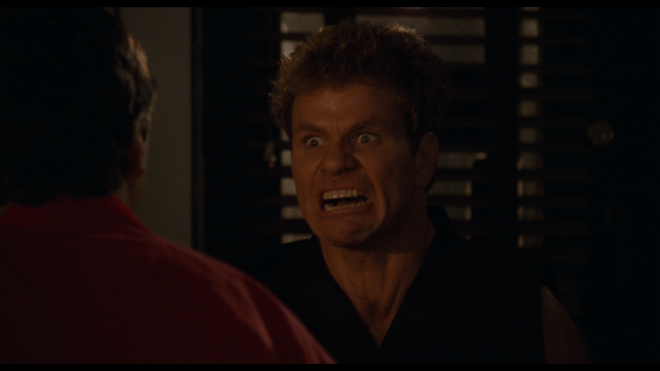 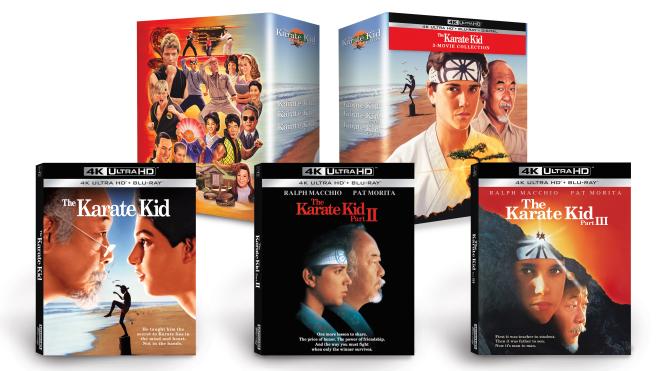 The Karate Kid Collection brings together the original trilogy on 4K Ultra HD Blu-ray. Sony reauthored The Karate Kid to include a couple of new bonus features and a Dolby Vision HDR grade. Not enough of an improvement to double-dip for unless you love the sequels. The Karate Kid Part II is a solid sequel that earns an excellent Dolby Vision transfer and an Atmos audio mix to match. The Karate Kid Part III may be the least successful of the series but it’s still a fun watch. In keeping with its reputation, it scores a notable upgrade in the A/V department with a solid Dolby Vision transfer and respectable Atmos audio track, but not as impressive or engaging as the previous two films. As a complete package box set, Sony didn’t skimp on the packaging including both 4K discs and 1080p Blu-rays for each release. Bonus features may not be all that extensive as you move down the series, but there’s some good stuff here. If you’re a fan of the series this is a great set for the collection. Highly Recommended