George Miller's Mad Max Beyond Thunderdome is a memorable and highly enjoyable installment to the dystopic adventures of the iconic lone road warrior that satisfyingly expands on the mythology of a post-apocalyptic future littered with modified-car mayhem and spectacular super-charged stunts. The third installment enters the Ultra HD arena and comes out on top thanks to a beautiful 4K presentation and an excellent Dolby Atmos track. Although a bare-bones release, this UHD edition of the beloved cult favorite is nonetheless Recommended.

In the case of the Mad Max series, the third outing is the weakest entry in the franchise and not quite as good as its two predecessors. Don't get me wrong, there is still a good deal worth enjoying in George Miller's Beyond Thunderdome, and the production as a whole is, for the most part, satisfying and delivers its fair amount of visual spectacle. Over the years, the movie has grown in cult status and is reasonably well-liked by most fans, such as yours truly, mostly deriving from fond memories of seeing it in theaters and Tina Turner dominating the screen. But admittedly, and in spite of the plot's loftier goals, romanticized hopes for humanity, Miller's script, which he co-wrote with Terry Hayes, ultimately falls a bit on the hollow side and feels rushed as it tries to encapsulate a larger vision of a post-apocalyptic world at the brink of moral bankruptcy.

Splitting the directing duties with George Ogilvie, Miller expands the epic scale of his dystopian Australia to include a peculiar settlement called Bartertown and a camp of children living a quasi-pastoral, Eden-like ignorance. In this portrait of a future where humans try to regain, in some small measure or another, the social civil order of the past, the filmmakers imply this as paving the road to a new existence. In Bartertown, matriarch leader Aunty Entity (Turner) is in a political dispute with Master (Angelo Rossitto), an engineer who uses his expertise to refine methane gas from pig feces. Here, it is politics as usual with adults old enough to remember a time before the apocalypse, before civilization quite literally went to the pigs. On the other hand, the children with their broken English rely on stories, hearsay and random artifacts to imagine times past, a sense of myth-making born of innocence while inaugurating a future that's hopeful.

Mel Gibson's Max is caught in the middle of these two planes of existence while traveling through the desert and is robbed of his possessions, which included another modified vehicle pulled by a team of camels. The thief it turns out is none other than Bruce Spence, this time playing Jedediah the Pilot. Like the first two movies, Beyond Thunderdome comes with a strong western theme, particularly in Max as the archetypal, morally ambiguous anti-hero. At one point, Miller makes this influence very clear when Max is announced into the Thunderdome arena as "The Man with No Name." Much of the action and plot evolves at a decent pace, but it all comes to an abrupt conclusion that largely leaves fans feeling somewhat empty. Nevertheless, and despite a rather weak ending, the third outing in the Mad Max adventures is a good and mostly satisfying third chapter. 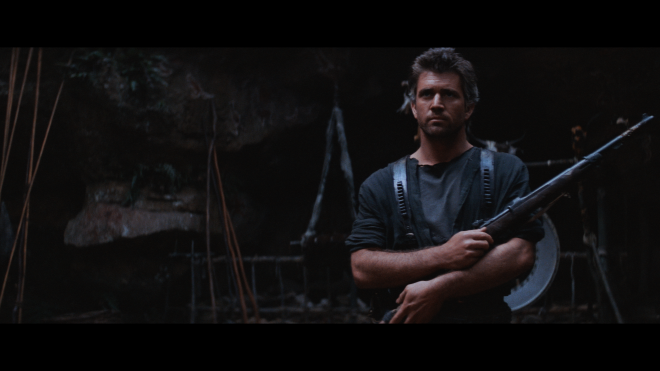 Vital Disc Stats: The Ultra HD Blu-ray
Warner Home Video brings George Miller's Mad Max Beyond Thunderdome to Ultra HD Blu-ray as a two-disc combo pack with a Digital Copy code. When redeeming said code, users are granted access to the 4K UHD version in Dolby Vision HDR and Dolby Atmos audio. The dual-layered UHD66 disc sits comfortably opposite a Region Free, BD50 copy, and both are housed inside the standard black, eco-elite keepcase with a glossy slipcover and new artwork. At startup, the disc goes straight to a silent, static menu screen with the new artwork and the usual options along the bottom.

NOTE: Per Warner Bros recent statement, any audio issues were only present with the Mad Max: The Road Warrior set. Beyond Thunderdome was not affected.

The third installment enters the Ultra HD arena and comes out on top, defeating all previous releases and looking the best it ever has at home. Struck from a brand-new restoration and remaster of the original 35mm camera negatives, the HEVC H.265 encode may not be the sharpest in the lot, falling on the softer side of things for a majority of the runtime, but this is due to the original cinematography and is inherent to the source. Nevertheless, the native 4K transfer enjoys a welcomed uptick overall, showing cleaner details and definition while displaying an upgraded contrast balance, allowing for better clarity and visibility of the dusty, grubby shacks of Bartertown. Specular highlights add a crisp, narrow glow to the puffy clouds in the sky and in the bloom of various light sources while metallic surfaces have a punchy, realistic sheen to them.

The visuals are further complemented by the improved brightness levels, bathing the subterranean Underworld refinery, the nighttime exteriors of Bartertown and the dark, dank corners of the primitive Planet Erf in rich, true blacks. Shadow delineation is just above average, dropping slightly during the Underworld sequences, but remains faithful to the filmmakers' creative intentions, and some of the finer details can still be appreciated. Best of all is the enhanced wider color gamut, making the film looks fresher and more rejuvenated. The HDR10 presentation displays full-bodied, energetic primaries with an array of blues being the standout, from the vibrant cerulean shade in the sky to the metallic blue tint of Bartertown. Secondary hues are equally impressive, particularly the warm, golden earth tones of the desert and in the children's oasis while the fire from either torches or explosions shines a richly deep, fiery orange.

Awash in a fine layer of natural grain that's consistent from start to finish, the 2.40:1 image is a notable improvement over its HD SDR predecessor with a lovely cinematic appeal that fans will love. (HDR10 Video Rating: 82/100)

Beyond Thunderdome cheers and hollers into home theaters with an excellent and highly satisfying Dolby Atmos soundtrack. Although it still remains a front-heavy presentation with precise, well-prioritized vocals in the center, imaging displays a terrifically well-balanced channel separation. Several off-screen effects subtly and convincingly extend into the top heights, generating a broad and spacious half-dome soundstage, particularly those sequences taking place within Bartertown.
The chants, screams, yells and random chatter are discretely heard all around the listening area while Underworld is layered with the echoes of pigs and random machinery noise, and the faint sounds of birds chirping, leaves rustling and wind blowing travel overhead in the Planet Erf sequences. The mid-range exhibits outstanding definition with splendid clarity between the mids and highs, allowing the grind of metal and the howl of the wind to come in loud and clear while Maurice Jarre's score enjoys a great deal of warmth and superb fidelity. The low end is on the quieter side, but it is nonetheless appreciably responsive and appropriate for a movie of this vintage, making for an awesome listen. (Dolby Atmos Audio Rating: 84/100)

Unlike Road Warrior, this UHD edition of Beyond Thunderdome is a bare-bones release.

Despite being the weakest link in an otherwise awesome franchise, Mad Max Beyond Thunderdome is nonetheless a memorable and highly enjoyable installment to the dystopic adventures of the iconic lone road warrior. The second sequel further expands on the mythology and world-building of George Miller's bleak vision of a post-apocalyptic future with excellent, satisfying results. The third installment enters the Ultra HD arena and comes out on top, equipped with a beautifully good 4K HDR10 presentation and an excellent Dolby Atmos soundtrack, easily besting its Blu-ray predecessor. Although a bare-bones release, this UHD edition of the beloved cult favorite is nonetheless recommended.