Martin Campbell may have redefined James Bond - twice - but he paints by the number with the action-packed but predictable thriller The Protege. Maggie Q again shows why she’s one of the best action leading ladies performing impressive stunts while Michael Keaton nearly steals the show. Lionsgate delivers a technically first-rate 4K Ultra HD Blu-ray with an impressive Dolby Vision transfer and a commanding Atmos audio mix to match. At the very least, it’s Worth A Look

As a child, Anna (Maggie Q) was rescued from an apartment in Saigon after murdering her captors by an assassin called Moody (Samuel L. Jackson). Raised as a lethal killer, Anna and Moody earn huge paychecks finding and sometimes executing the people who don’t want to be found. When they take on a routine search and find mission, Moody is brutally murdered in his home. Now Anna must find their target in order to uncover a deadly secrete and exact her revenge. 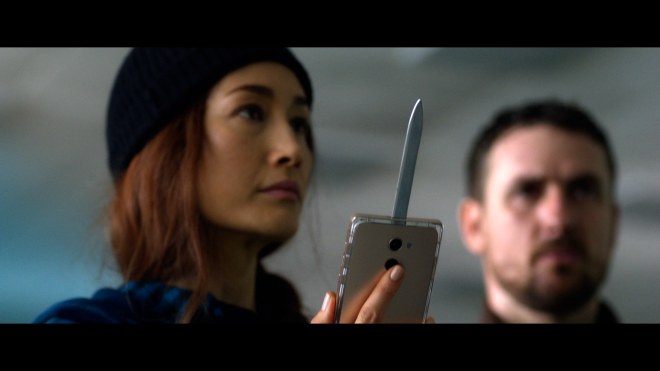 The revenge movie is a particularly nasty beast of an action subgenre. First, you have to establish the main character in such a way that you like them enough to want to follow them on their quest for murder. Second, you have to create a compelling reason why the events transpired that charted the course of the plot to follow and the ensuing violence. John Wick is an excellent example of a modern revenge movie classic. It wasn’t just the death of the dog and theft of his car that put him on that blood-soaked path - it’s what those things meant to him in the wake of a personal tragedy. Now The Protégé certainly sets the stage for a solid revenge thriller with a great leading character, but the compelling reason never really materializes as brilliantly staged action scenes stumble to predictable plot and character cliches.

Taking center stage is Maggie Q. After her time on Nikita, being a total badass in Live Free or Die Hard, she proved her physical chops enough times to easily carry an action franchise. As an actual protégé of Jackie Chan, Maggie Q brings an intense physicality to the role of Anna performing impressive fight sequences and stunts while the camera never cuts away. She’s fantastic in this film and this could have been the groundwork for a badass franchise - that is if it wasn’t so damned predictable. You have a pretty keen idea where this movie is going to go very early and it doesn’t miss an expected plot beat. 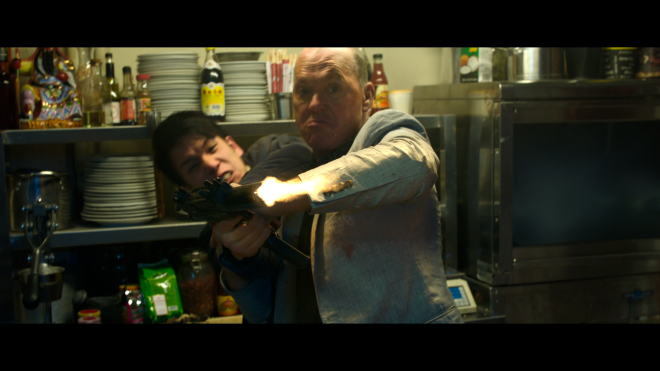 Michael Keaton stands out as the hired gun Rembrandt. He’s been around the block a few times but he’s lethal and Keaton brings his natural charm and his own physical prowess to the role. However, as great as Keaton is in the part, he’s not given much to do with it that’s terribly unique or interesting. His relationship with Anna is again a to-the-letter “we’re not so different you and I yadda, yadda...” cliche.

With Martin Campbell behind the camera, I was hoping for something a little more dynamic and interesting. He’s made some of the best action movies of the last 25 years often redefining what the genre can be and do with its characters. His 2017 thriller The Foreigner with Jackie Chan is a perfect example of how to shake up the action revenge genre for the better. Sadly The Protégé is comfortable recycling older better material often feeling like a lost episode of Nikita instead of something new and exciting. The action sequences are impressive and intense enough to get the blood pumping, but the plot and story contrivances stall out that momentum. 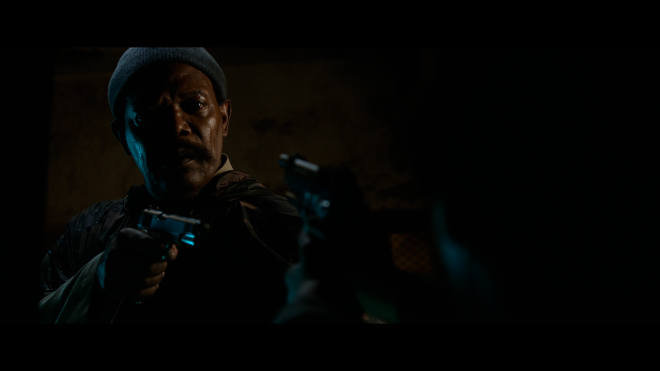 I’ve looked long and hard but haven’t been able to locate the technical specs for the digital intermediate sourced for this 2160p 2.39:1 Dolby Vision transfer, but regardless - it’s a stunner! Shot throughout Eastern Europe and Vietnam, the digitally sourced image captures an incredible amount of detail. Facial features, costuming, little nuances in the production design like Moody’s home or Anna’s rare bookstore are all on screen to be scrutinized. Leave it to the casting director to hire a terrific cast with unique and distinct appearances.

Dolby Vision (and HDR10) offers nice enhancements to the colors and black levels over the 1080p counterpart. The color pallet for this film is generally warm favoring natural yellows and orange tones with reds skewing towards the deep crimson spectrum. Blues have a lovely deep navy presence to them. Skin tones are healthy and natural throughout. This is a movie that loves its dark shadowy spots and they look fantastic here. Especially towards the big climax and coda, there’s a lot of shadows with dim lighting and this transfer handles them perfectly without losing the fine details and maintaining image depth. Whites are crisp although they really only get a few minutes to shine. Free of any compression artifacts, this is an overall excellent transfer. 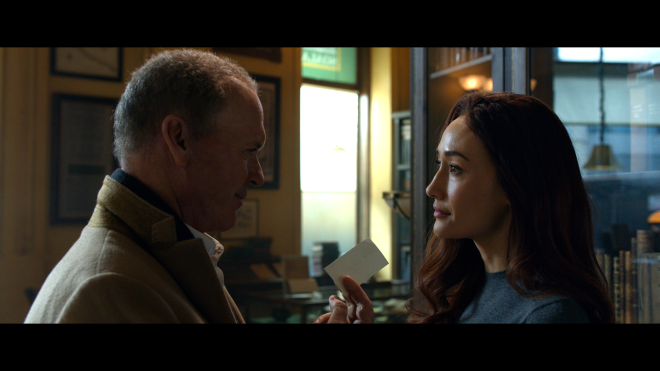 Not to skimp on the audio, Lionsgate gives The Protégé an excellent Atmos audio mix. Considering all of the action beats this film has to offer - this is some impressive sound design. My favorite moments of this film were the fight sequences - Maggie Q versus anyone, Michael Keaton in the restaurant kitchen - it’s great stuff. These moments really utilize the full channel spectrum allowing for pinpoint object placement throughout the soundscape. It’s so damn cool to hear the punches and kicks and breaking glass move from the sides through the front/center channels into the height speakers and then back down and around! Maggie Q repelling down a firehose is another great effect.

Even during the quietest conversational moments, there is some great atmosphere with excellent surround activity. The restaurant scene between Maggie Q and Michael Keaton pulling guns on each other under the table is a great example. Subtle background sounds mingle perfectly with dialog and the heightened clicks of their weaponry. Dialog is never an issue and levels are spot on without the need for any compensation. 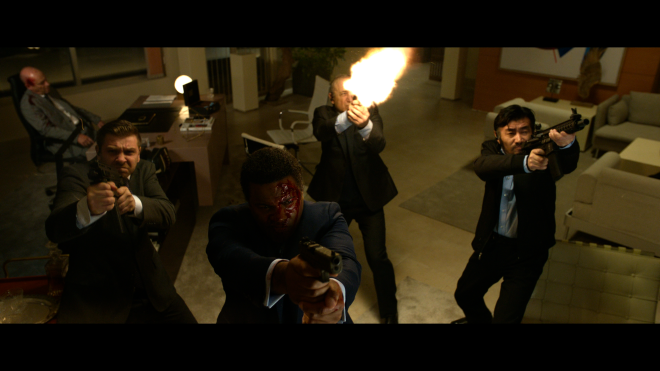 While not the most robust package ever, The Protégé enjoys some decent bonus features. The Martin Campbell commentary is the key highlight but the making of feature is actually pretty good too. At nearly 40-minutes long it’s better than average without being the standard EPK nonsense that passes as a bonus feature these days. 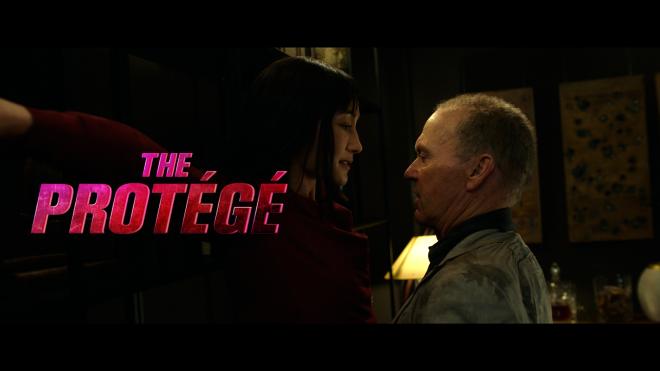 After the excellent The Foreigner from Martin Campbell and with the casting of Maggie Q and Michael Keaton with Samuel L. Jackson, I had some high hopes for The Protégé. It was entertaining enough but hardly memorable. Some great action sequences keep your attention but a limp paint-by-numbers plot and cliche characters mark this assassin revenge flick a miss in my book.

Lionsgate delivers a genuinely excellent 4K Ultra HD Blu-ray release. If you dug The Protégé don’t hesitate to pick up this disc. The A/V presentation offers a damned good Dolby Vision transfer with an excellent Atmos audio mix to match. And in a rare case, the bonus features are also pretty good too. While it ultimately wasn’t my brand of action flick, I know some folks who really got a kick out of this one so at the very least it’s Worth A Look.