Jennifer Kent's masterful The Babadook is a remarkable surreal drama that is as terrifying as it is emotionally poignant, featuring a memorable performance by Essie Davis. Imported from the UK, the art-horror classic finds a home on 4K Ultra HD as a two-disc Limited Edition collector's package courtesy of Second Sight Films. Featuring a striking 4K presentation, a reference-quality DTS-HD track, a wealth of supplemental material and a hardcover book, the overall UHD package is a Must-Own import for horror hounds everywhere and makes an outstanding addition to the library.

SPOILER ALERT: Please be aware that this review contains important spoilers, so if you have not watched the film, do not read further than the first paragraph.

Whatever objections and criticism are hurled at the film by some, Jennifer Kent's The Babadook is an undeniable masterpiece, a phenomenal work poised to become an art-horror classic. Seamlessly weaving psychological trauma with familiar horror elements, her script places more emphasis on narrative than the usual genre entry, centered around a widowed mother wrestling with her son's nightmarish imagination slowly maturing into a tangible manifestation of pain. Part of the genius is in convincing the audience to believe for the first half of the story that it's about the troubled six-year-old boy (Noah Wiseman) and a terrifying supernatural creature from a pop-up book. But as their problems progress for the worst and the shadowy monster coincidentally grows in strength, Kent flips the horror into a poignant, heartbreaking surreal drama about a grieving mother (Essie Davis) and her unresolved grief. 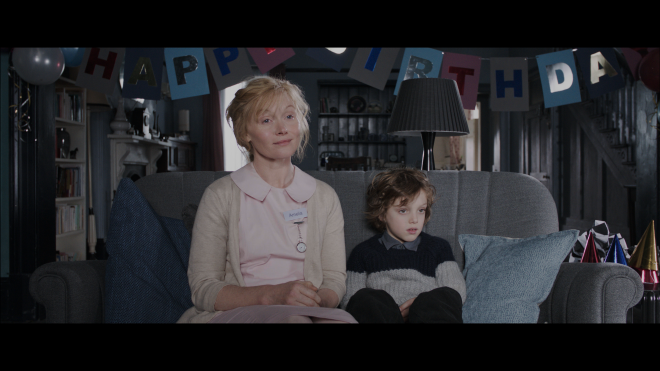 The other part of the film's genius is in the production itself, which is simple and modest, mostly unfolding within the seemingly uncomplicated Victorian-style house. Taking inspiration from German expressionism, Kent and her team, however, devise a bleaker and more somber mood in which to understatedly immerse this tragic tale, one that subtly grows into an eerily ominous atmosphere like an unseen malevolent presence thickly and heavily hanging in the air. The near-monochromatic cinematography, layering large black splotches of shadows over drearily grey interiors with touches of melancholy blues, is a reflection of Amelia's state of mind, her depression taking material form. As the house worsens, the neglect of her mental health and being in denial of her painful truth after many years also takes the shape of a monster that threatens the safety of her child, making for a frighteningly emotional film. 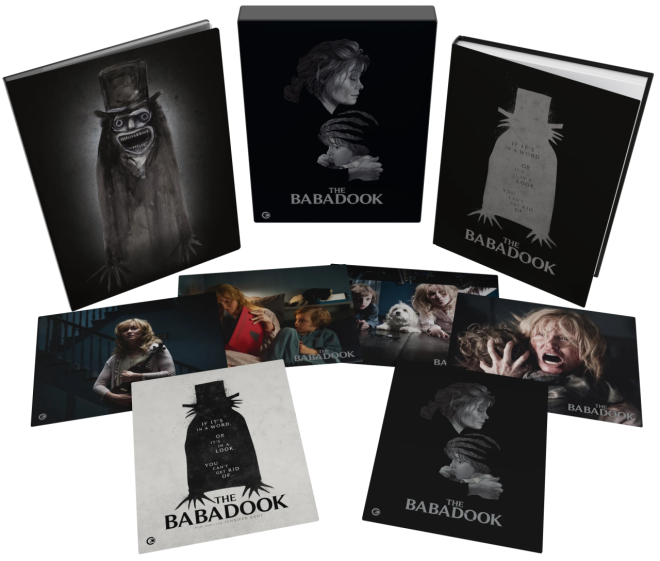 For a different take on the film, check out our review of the 2015 Blu-ray HERE.

Imported from the United Kingdom, Jennifer Kent's The Babadook arrives courtesy of Second Sight Films as a two-disc 4K Ultra HD Limited Edition box set. Inside an attractive, sturdy black cardboard box with new artwork, a digipak with clear plastic trays houses a Region Free, dual-layered UHD66 disc opposite a Region B locked, dual-layered BD50 disc. Along with six postcards, the package also contains a beautiful 150-page hardcover book with six insightful essays, various color photos and production stills, original concept art for the pop-up storybook and a reprint of an interview with the director from 2014. At startup, the disc goes straight to an animated screen with the usual menu options and music playing in the background. Fans purchase directly from the Second Sight website HERE or from Zavvi linked above.

Grieving monsters dwell in the Ultra HD basement, terrifying owners with a stellar, gorgeous HEVC H.265 encode that'll have fans feeding their Blu-ray copies to The Babadook. Reportedly coming from a fresh restoration and remaster of the original elements, the native 4K transfer enjoys a notable uptick in overall clarity and definition. Individual hairs are distinct, the stitching of clothing is discrete and the small objects decorating the background are plain to see throughout. The fabric and texture of the book are striking, and facial complexions are lifelike and revealing, exposing every pore, wrinkle and negligible blemish in the cast. There are a few scenes that look a tad softer than others, but all in all, the picture is in excellent shape and sharper than its HD predecessor.

The heavily stylized cinematography comes in a muted, near-monochromatic palette that leans more towards various shades of grey and a steely blue tint. Nevertheless, the HDR10 presentation boasts a beautifully balanced contrast and brightness, bathing the 2.35:1 image in rich, ebony blacks and inky, velvety shadows that penetrate deep into the screen without losing visibility in the darkest corners of the frame. While whites are notably crisper and cleaner, specular highlights show a tight, radiant glow in the hottest spots, providing the edge of clouds with a realistic splendor while maintaining sharp detailing during the brightest moments. Colors are intentionally restrained and even somewhat faded to complement the visual aesthetic and the plot's somber theme, but primaries benefit from the boost and are accurately rendered. Secondary hues are more nuanced but with a more energetic and bolder appeal than their HD SDR counterpart, and skin tones appear more natural and true to life with a peachy-redness around the cheeks.

In the end, this is a marvelous, highly satisfying 4K video with a lovely cinematic appeal that is sure to please fans everywhere. (HDR10 Video Rating: 94/100) 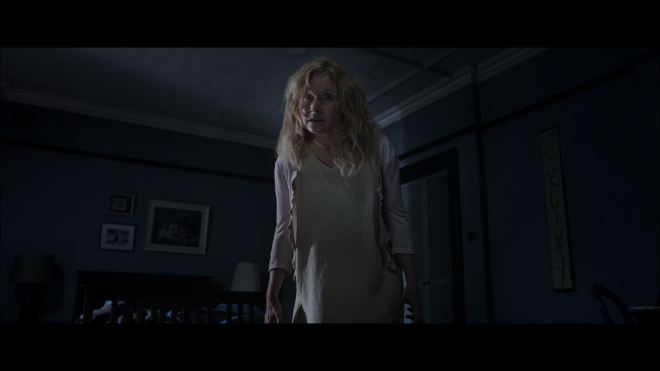 The psychological horror classic terrifies home theaters with what appears to be the same DTS-HD Master Audio 5.1 soundtrack enjoyed on the previous Blu-ray. Although an object-based audio option would have made for a stupendous listening experience, this lossless mix is nonetheless an exceptional reference-quality track. The design utilizes the entire system in creatively subtle ways to generate a creepily immersive 360° soundfield, alternating between moments of complete silence to sudden frantic bursts of ear-piercing pandemonium while sustaining remarkable clarity and distinction in the mid-range. Dialogue is always crystal clear and precise, and a powerfully robust low-end sends wall-rattling shivers. When applying the receiver's Dolby Surround or DTS: Neural:X up-mixing functionality, various effects flawlessly travel all around the listening area. From disturbing whispers to forbidding sounds of the monster, atmospherics echo all around and occasionally pan overhead with impressive, flawless effectiveness.

For a more in-depth take on the audio quality, you can read our review of the Blu-ray HERE. (Audio Rating: 98/100) 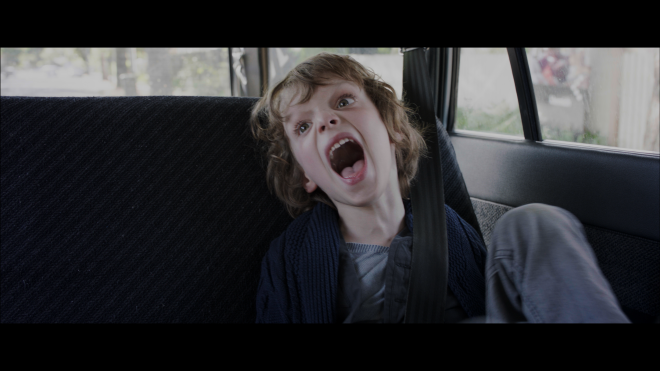 The same set of supplements are joined by a few new surprises. 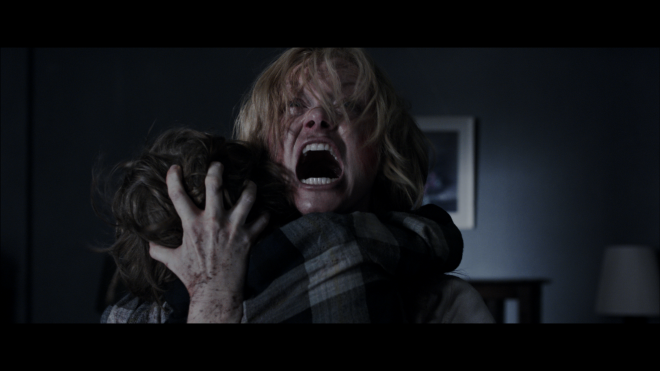 Masterfully told and designed, Jennifer Kent's The Babadook is a remarkable piece of horror filmmaking that draws from psychological trauma to create a surreal, phantasmagoric drama that is as terrifying as it is emotionally poignant. With an exceptional performance by Essie Davis, the tragic tale is a powerful, visually inspiring portrait of a grieving single mother and the monstrous danger of her unresolved grief. Courtesy of Second Sight Films and imported from the UK, the art-horror classic dwells in the 4K Ultra HD basement as a two-disc Limited Edition collector's package with postcards and a hardcover book. The HDR10 presentation is a striking, stellar upgrade over its Blu-ray predecessor, complemented by the same reference-quality DTS-HD MA 5.1 soundtrack as before. The same set of supplements are joined by a few new bonuses that are sure to keep fans busy, making the overall UHD package a must-own addition to the horror collection.