Dirk Bogarde, James Fox, and Sarah Miles headline Joseph Losey’s 1963 thriller The Servant - now on 4K Ultra HD Blu-ray from Studio Canal Vintage Classics. The film takes a diabolically creepy look at social class, the relationship between Master and Servant, and codependency in this slow-simmering potboiler adapted for the screen by Harold Pinter. Studio Canal delivers an exceptional 4K Ultra HD Blu-ray release with a stunning transfer with Dolby Vision HDR. At this time we only have access to a check disc, but the final package comes loaded with bonus features. If you’ve never seen this one definitely keep it on your radar. Highly Recommended.

NOTE: Images in this review are promotional stills. At this time we weren’t able to source images from the 4K disc. As soon as we can, we’ll update this review.

Tony (James Fox) has just gotten back to London after serving in Africa. Now on the precipice of personal and financial success, he’s bought himself a flat but finds he needs a manservant to keep up the place. The innocuous Barrett (Dirk Bogarde) is the only suitable applicant. Within moments of taking the job, Barrett is fixing up the house, decorating, cooking - everything Tony could need. But Tony’s fiance Susan (Wendy Craig) doesn’t like the man. As he brings his sister Vera (Sarah Miles) into the house to work as a maid, Barrett methodically strengthens his hold over the house - and Tony. 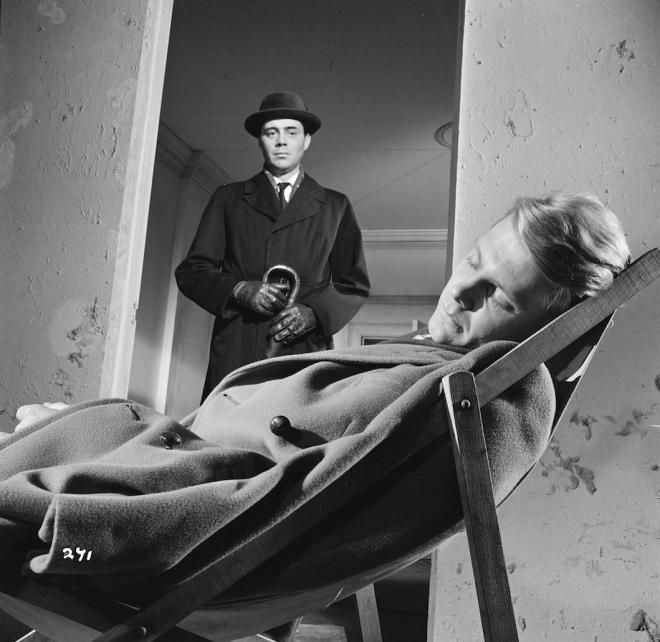 There’s nothing quite like a perfectly executed slow-burn potboiler. I love a film that knows how to take its time and not rush things. The Servant is paced and timed to slowly dribble out the character reveals. We’re given little tidbits early - Tony drinks too much, Barrett is clearly lying about his work history. The rest of the pieces fall into place at their own schedule. In fact, the film is at its most deceptive when it seems like nothing is happening at all. And when something important is revealed it’s only a half-truth forcing you to question every little bit of information about any of the characters. You can’t trust any of the characters to be truly honest players.

As a thriller, this film doesn’t get the blood pumping through violence or teasing the potential for mayhem. The thrills come from human nature and watching the worst in people slowly come out. Watching people find and exploit each other's weaknesses. Set against the backdrop of social classism, the characters hold sway over one another by their positions in life. Only Tony can hire Barrett, but only Barrett can take care of Tony. Barret exploits Tony’s alcoholism, but Tony is the only way Barrett can live above his station. Susan gives Tony emotional love but withholds it sexually, but Vera gives him what he needs physically. Where Barrett exploits Vera’s need for physical affection, she longs to get the personal emotional touches from Tony. Each character may not be of the same station in life but they all have their own power pieces to play in this twisted game.

With Losey’s excellent direction and Pinter’s fantastic script, the film visually comes alive thanks to master cinematographer Douglas Slocombe. The beautiful black and white photography captures the thematic turns in each character with the ever-changing balance of bright white light, deep blacks, and the shadows in between. When the film starts, it’s almost glaringly bright, but by the time the final real kicks in, the film is almost impenetrably dark with only small glimmers of light. This approach to visual aesthetics is just as important as the direction, writing, or performances. Light and darkness are their own characters begging you to ask why any character is being lit a certain way at any given time in the film.

And speaking of performances - this film has an amazing central cast. Dirk Bogarde, James Fox, Sarah Miles, and Wendy Craig all deliver impressive turns. Each character has a moments of being cruel and cold or innocent. While Tony and Susan live above the stations of Barrett and Vera, none of them above dibbing into acts of needless cruelty. Dirk Bogarde fronts a lot of the heavy lifting of the film giving a richly nuanced performance. Like his character’s dodgy record with honesty, he delivers a range of emotions you can’t always trust.

Likewise, James Fox delivers one of his better turns. I’ve mostly only seen him in stately aristocratic roles, so it was a pleasure to see an early performance where he’s much more of an average man. Sarah Miles and Wendy Craig needed more scenes together. They spend a lot of time blunting the emotional weight of their male counterparts, but they have their own interesting feminine dynamic almost playing their parts like exaggerated versions of Betty Friedan and Gloria Steinem.

It’s been a long, long time since I last got to see The Servant. I saw this film in a Film Noir appreciation class in school sometime around 2002 or 2003. While this may not seem like a traditional Film Noir with gritty detectives and sultry damsels, it’s steeped in the visual and philosophical aesthetics of the genre and the tight character machinations of trust and betrayal make it a solid fit. A pitch-perfect thriller, the film takes its time slowly building plot and characters towards a genuinely unsettling final act. It’s a hell of a film if you give it your full time and attention. 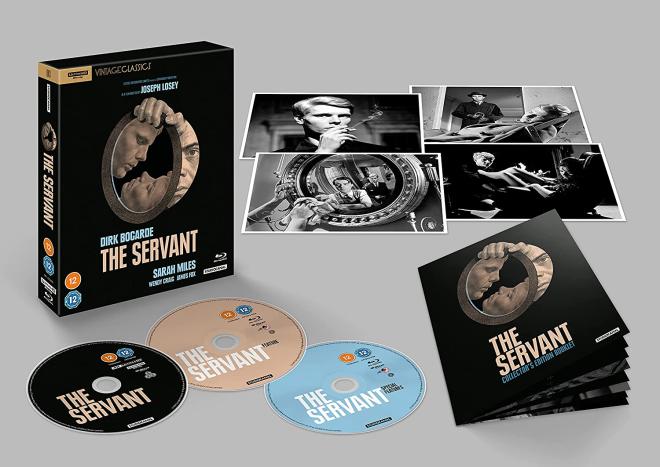 The Servant upgrades its station to 4K Ultra HD Blu-ray thanks to Studio Canal as part of their Vintage Classics series. We currently only have access to a Check Disc of the feature film, but the main set is a three-disc collection including the film on SDR Blu-ray with an additional Blu-ray disc for the bonus features. Also included will be some art cards and a booklet. As soon as we get hands on our pre-order set we’ll update this review and re-publish. 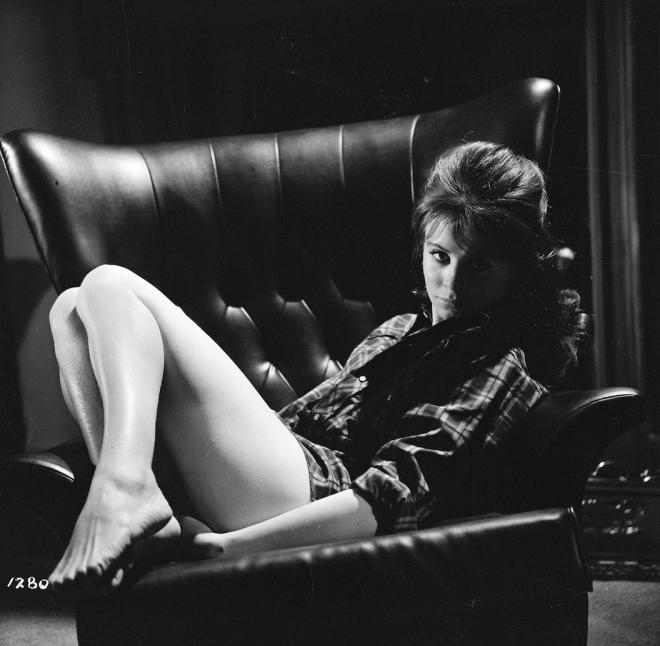 Often a mark of confusion for “proper” exhibition for British films made throughout the 1950s and 1960s, The Servant was exhibited in both 1.66:1 and 1.77:1. Both are technically correct and doing right by the film, Studio Canal lets you chose which presentation you prefer - both are available on the same disc. It honestly comes down to dealer’s choice. 1.66:1 is a little pulled back with some pillar-boxing along the left and right sides of the screen. 1.77:1 is tightened up and fills out your home screen nicely. But both aspect ratios communicate the image a little differently. I personally preferred the 1.66:1 over the 1.77:1 because it gave me a little more distance from the characters. There are a lot of closeups with long take deep focus shots. The 1.77:1 felt too tight and “in their world” and was just genuinely unsettling and uncomfortable - which is the point, but it was almost too much for me.

Regardless of which version you prefer, the image is impeccable! Slocombe’s photography looks fantastic. The 4K restoration with Dolby Vision HDR is truly first-rate work crafting an image that offers incredibly fine lifelike details in skin textures, clothing patterns, and the impressive production design. Watch how Tony’s flat changes throughout the movie for little imperfections reflecting each character’s deteriorating state of mind. Film grain is natural and intact without any signs of smoothing.

While there’s no color in the film, Dolby Vision HDR (and HDR10) beautifully affects the image’s whites and black levels with terrific shadow separation. The opening job interview where Barrett meets Tony for the first time is almost blindingly white, but blooming is never an issue. You can still make out clean details in faces, the rough condition of the flat, and the textures of Tony’s camelhair coat. By the end of the film, the image is nearly all black with subtle lighting allowing you to make out of the features of the room and the cast. In between, the shadow gradience gradually slides towards black or white as the mood and atmosphere of the film shift. Like the main story, at first, it doesn’t seem like a lot is going on with the visual aesthetics, but if you’re paying attention there’s a lot happening and this transfer does an incredible job capturing the visual intricacies. 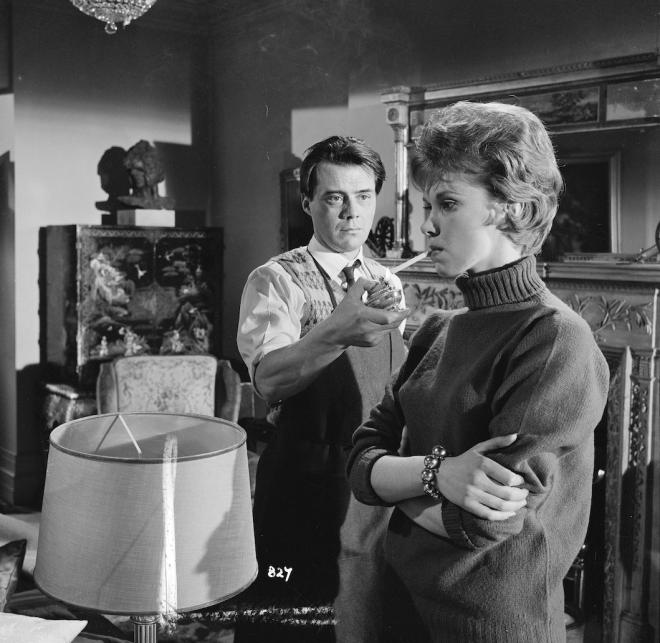 Studio Canal packs the disc with an impressive DTS-HD MA 2.0 mono mix that sounds terrific. The film is largely characters talking to one another or occupying space. There’s not a lot of action and scoring is relatively sparse, but there’s a lot of atmosphere to the mix. When things are light and happy, sound effects sound closer and more intimate. When things go darker, there’s more echo and distance between the elements. Dialog is clean and clear throughout without issue. Audio elements are clean without any hiss or age-related issues to report for a nice dynamic track. 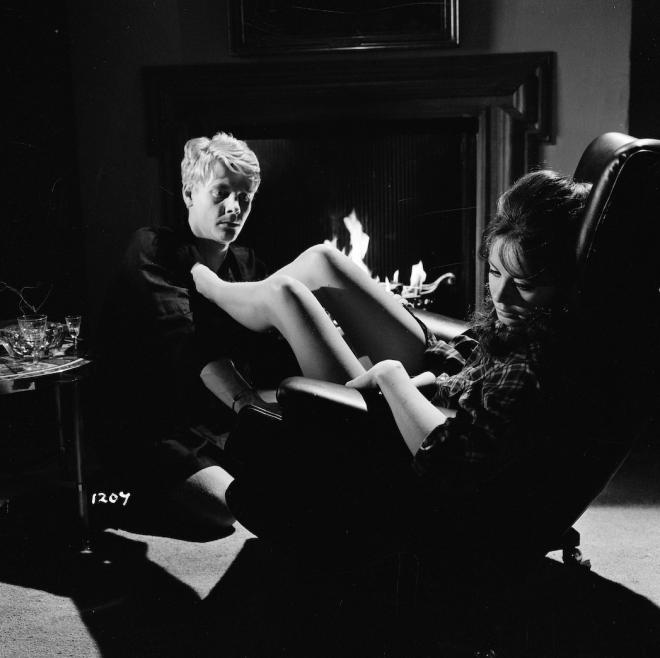 There are a bunch of bonus features in the final set that we didn’t have access to with this check disc. We’ll report back on this later down the line but here are the full specs of included bonus content. 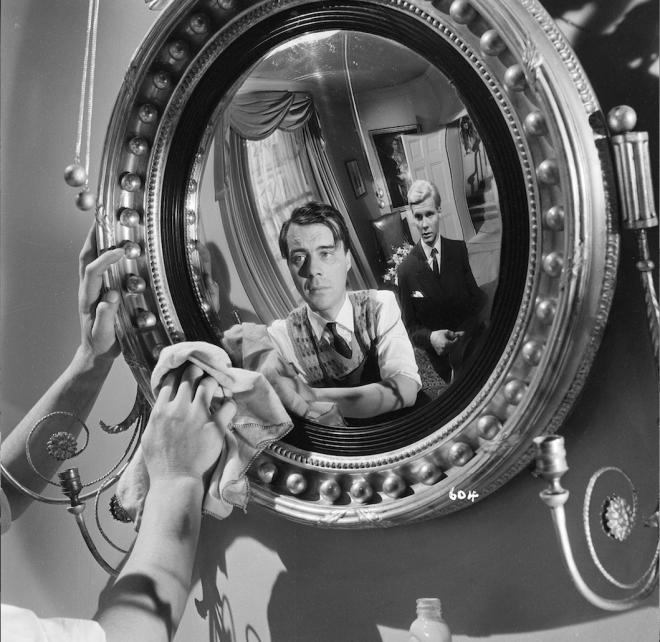 While The Servant may not be for everyone, but for folks who love a deliberately paced character-driven thriller, it delivers. Joseph Losey and Harold Pinter crafted an intricate story brought to life with an incredible cast highlighted by excellent turns from Dirk Bogarde and James Fox all captured with some striking photography by cinematographer Douglas Slocombe.

Studio Canal Vintage Classics delivers a truly first-rate release of The Servant. The 4K Ultra HD transfer with Dolby Vision HDR (and HDR10) is immaculate. The audio mix is terrific. While we haven’t gotten a look at the bonus features, there is a lot of material included with this release. We’ll revisit this title when our import set arrives, but if you’re a fan of the film this is a splendid disc and I can’t wait to get a look at the whole package. Highly Recommended

THE SERVANT opens in cinemas on September 10th in the U.K. and on 4K UHD Collector's Edition Blu-Ray, DVD, and Digital on September 20th - there are no current U.S. release plans.