Robert Zemeckis’ Cartoon-Noir classic Who Framed Roger Rabbit slips its way onto 4K Ultra HD Blu-ray. Starring Bob Hoskins, Joanna Cassidy, the voice of Kathleen Turner, and a terrifying turn from Christopher Lloyd, the film may be more adult-friendly than intended, but if you love hardboiled detectives, this is a delightfully animated tribute to the genre. Disney delivers a welcome A/V upgrade in the form of a fine native 4K HDR10 transfer and a new decent Atmos track. A true visual effects marvel, Who Framed Roger Rabbit is a great show and a welcome addition to the format. Highly Recommended

After the death of his brother, Eddie Valiant the once-great hero P.I. of Toontown is on the skids. One drink at a time, he picks away at his once-prominent career refusing to take any Toon jobs trading for easy cash. After earning a fast hundred to get some gossip shots, Valiant is now the only guy able to help the most famous cartoon of all, Roger Rabbit (voice of Charles Fleischer) beat a murder rap. Unfortunately for both of them, Judge Doom (Christopher Lloyd) and his murderous toon minions are on their heels with a diabolical plot that could destroy all of Toontown and the movies as we know them! 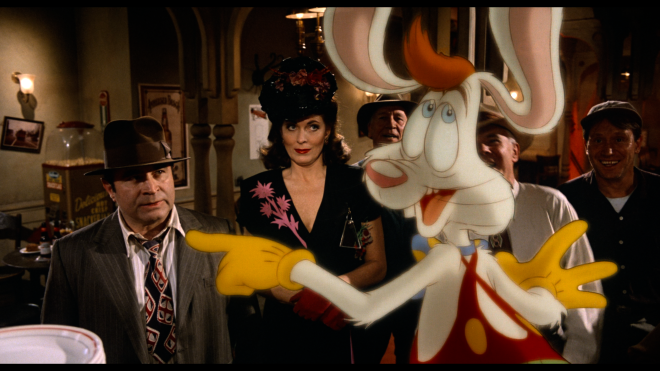 I’ve had a long love for detective stories. I’m not exactly sure when or where it all started but I’m willing to wager seeing Who Framed Roger Rabbit when I was all of five years old in the old split-theater Ann Arbor 1&2. I remember that viewing only because it was the one time my mom tried to get me and my sister out of the theater but was shushed back into her seat. We couldn’t figure out why she wanted to get us out of there when the movie was just getting going. As an adult, now I kinda get it, Baby Herman's slapping a woman's behind and Jessica Rabbit's large... assets... aren't your average kid cartoon.  Even with some overly sexualized characters, this movie is still a gas. It’s one of the few movies that I loved as a kid that got better as I got older because I got the advanced humor and also appreciated the genres it was paying tribute to. 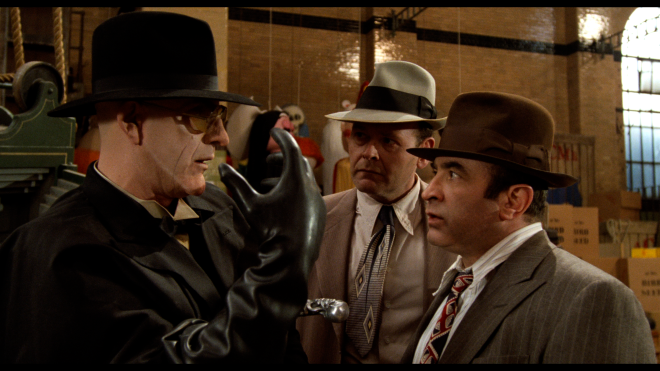 This was a movie that was sold to audiences as kid-friendly - but I feel 30-odd-some years later was mostly meant for adults. Not that the humor only offers jokes adults would get, but if a kid laughs it feels more incidental. That’s not the low bar Zemeckis and writers were aiming at. At the same time, like many Zemeckis movies, Who Framed Roger Rabbit feels like it was made to entertain himself. Zemeckis has always been into pushing visual effects boundaries and animation - here he got to do both and the results are spectacular.

While Zemeckis can get a little distracted with the technology at his disposal at the cost of story, that’s not the case here. We have a fully-fledged classic noir detective story complete with a dizzyingly intricate scheme, murder, a diabolical villain played by the always terrific Christopher Lloyd, and a dazzling Femme Fatale with Jessica Rabbit voiced to perfection by Kathleen Turner. If this wasn’t a partially-animated mostly kid-friendly film it’d make an excellent triple feature with L.A. Confidential and China Town. Even partially animated - it holds its own in the genre largely thanks to the late great Bob Hoskins delivering a memorable hardboiled gumshoe. 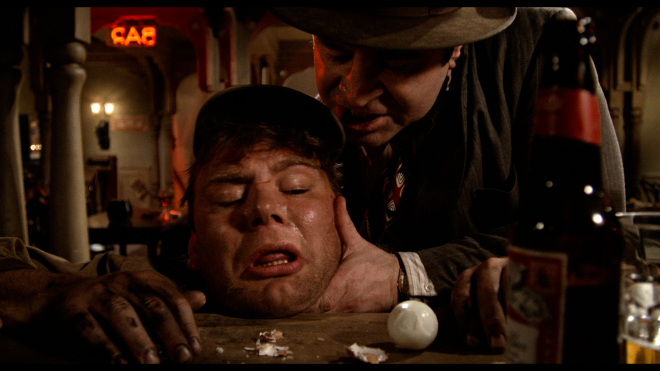 When I was a kid watching Who Framed Roger Rabbit I wasn’t so concerned about how seamless the visuals were. I just took it that cartoons were real and cohabited with humans. Now watching it as an adult I appreciate the intricate pre-CGI special effects wizardry on display. While this wasn’t the first film to use live people with animation, it was probably the first to let the camera move around the characters as if a 2-D character had three-dimensional features within any given space. The second the opening cartoon ends revealing the real-life set, the film becomes something truly grand and special to see. That first scene with Roger in Valiant’s office is still amazing with the camera movements, Roger’s changing perspective, and how he and the Weasels interact with objects in the room. Some of the effects aren't always seamless but for what Zemeckis and his team had to work with, it's dynamite stuff.

Now with the long-awaited sequel apparently coming sometime in 2022, there’s a piece of me that worries at how hollow it’ll all feel. That might be a side effect of my allergic reaction to Space Jam: A New Legacy, but I don’t really want to see another feature Roger Rabbit movie. The time to have made it was over 25 years ago. As great as Who Framed Roger Rabbit is, a sequel isn’t necessary. So far removed it feels like so many other recent Mouse House releases and just another nostalgic stretching of an IP to see what sticks rather than having a genuine reason to make another movie. Hopefully, I’m wrong and all those involved have something special to offer. Even if that new movie is a dud, we’ll still have this classic to fall back on.

For another take, Read Our 2013 Blu-ray Review

Vital Disc Stats: The 4K Ultra HD Blu-ray
After languishing on their proprietary streaming service, Disney finally gets around to bringing Who Framed Roger Rabbit to 4K Ultra HD Blu-ray in a two-disc 4K UHD + Blu-ray + Digital set. The disc loads to Disney’s standard menu allowing you to go to the basic main menu or just jump right into the main feature. The included 1080p disc carries the bulk of the bonus features and only the previous DTS-HD MA 5.1 track. 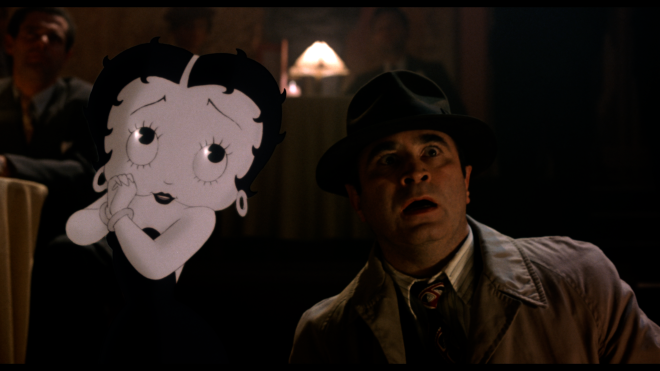 Given its age and the visual effects techniques of the time, I wasn’t sure what to expect with a full 4K transfer of Who Framed Roger Rabbit with HDR10. The 25th Anniversary Blu-ray was alright but it wasn’t exactly a showstopper. The Disney+ presentation gave me some hope, but my usual complaint of fixed low bitrates hampering black levels and image depth still tempered expectations. Now that we have this gem on disc, I’m pleased to say the wait was worth it. While this transfer might not make the best all be all list for the format, for this film, it’s a notable improvement. 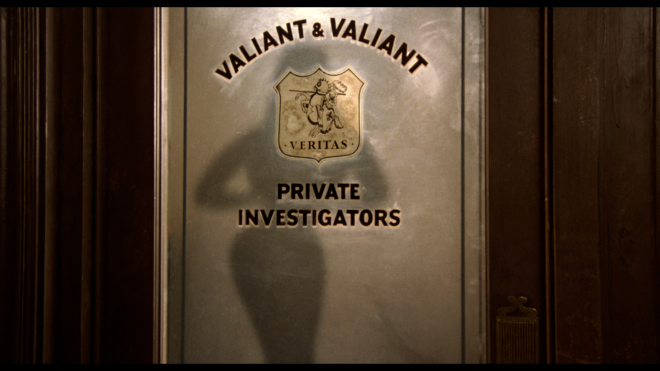 First out of the gate, details are sharper and better resolved than the 25th Anniversary Blu-ray - at least for the live-action characters. There’s still a softness with the animated characters, but fine lines are a bit cleaner now. Film grain is apparent but not intrusive nor are there any signs of DNR. Overall it’s a nicely organic film-like appearance with impressive textures and production design details to soak in. 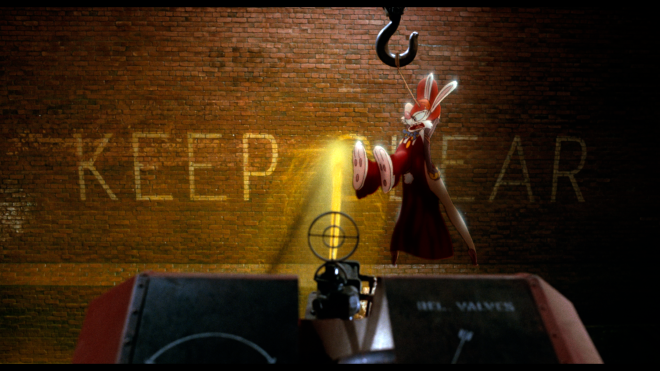 HDR10 also nicely enhances the presentation. Given all of the animated characters running around throughout - there’s plenty of primary pop in virtually every scene. When Eddie Valiant gets to Toontown about two-thirds through the movie there’s a full range of colors on display. HDR does pull some of the effects lines between real and animated out, but it’s not too distracting or "hovering" like it can with some iffy CGI. Throughout the show, black levels are cleaner, inkier, and avoid crush with a deeper sense of depth in the image. Whites are crisper and bolder compared to the softer eggshell of the old Blu-ray. Considering all things this title had working against it, I’m really impressed with the results. 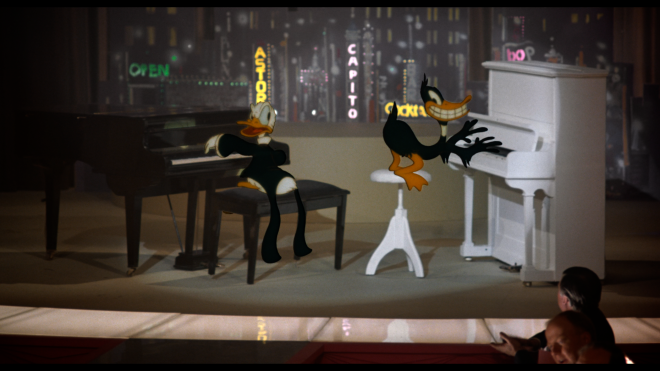 Not content with a restored native 4K transfer, Disney brings over a new Atmos audio track. While not an overly aggressive track, it does offer up a slightly stronger presence than the DTS-HD MA 5.1 - but not by much. This isn’t quite along the lines of other troublesome Atmos tracks from Disney, but at the same time, it could be a bit more aggressive. There's some nice surround activity in key moments - the opening cartoon, soundstages, the nightclub scene, but there are plenty of quiet front-loaded stretches. 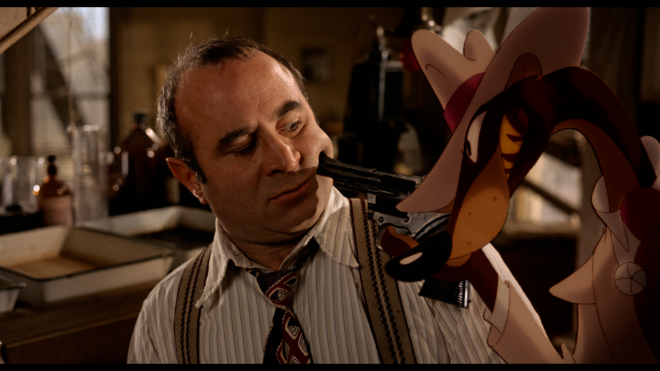 Like the old 5.1 track, a lot of the mix remains front/center focused with the height channels only offering some slight extensions. The trip to Toontown, the dueling pianos, and the final climax in the warehouse offers some pinpoint object placement for some key sound effects, but again not overly aggressive. Bass response is about the same as the 5.1 - the trolley car passing the bar and a couple of other effects get a little better rumble in the subs but nothing that’ll blow your hair back. It’s not a draw, overall I'd say the Atmos is better but there’s just not that massive an improvement to say this mix was fully worth it. Important Note: The DTS-HD MA 5.1 track is not included on this disc, so I had to do a lot of disc flipping to compare and frankly some sequences enjoyed little difference where other more active sequences spurred a better more immersive experience. 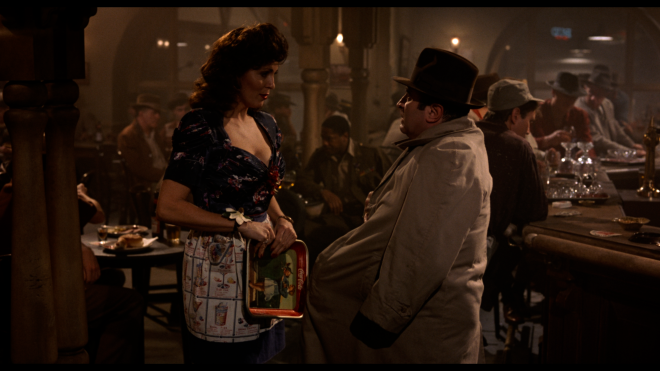 No new bonus features have been assembled for this release. The 4K disc only offers the previously available audio commentary, while all of the other features are retained on the standard Blu-ray disc. See the linked review of the 25th Anniversary Edition for full details. 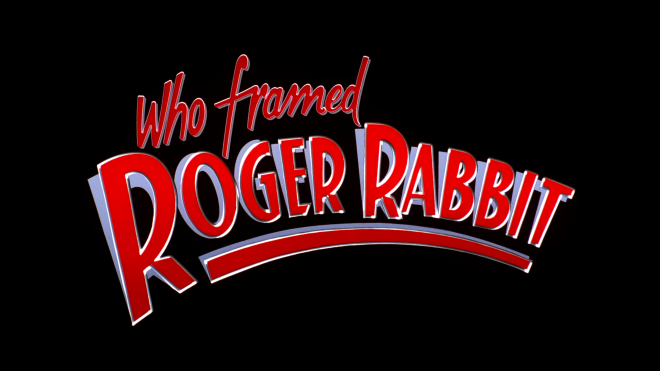 Who Framed Roger Rabbit is a true classic. Rolling with the traditional gumshoe detective genre, we get an animated entertaining kid-friendly (mostly) movie. By playing things straight, the humor works on a lot of levels. If you have little ones in the room they’ll appreciate the likes of Bugs Bunny, Donald Duck, and Dumbo making guest appearances while Mom and Dad will appreciate the more adult angles of the plot. This is one film where I've worried it will age out for me, but every time I check it out it's still a gas.

Disney easily outpaces their 25th Anniversary release with this new native 4K HDR10 transfer. The film looks better than ever with cleaner clearer details, bolder colors, deeper blacks, and brighter more natural whites. Also included is a new Atmos mix that may offer some small enhancements but isn’t altogether a massive improvement. All around this is a solid release for a great flick. Highly Recommended.