Mary Harron's excellent and horrifying adaptation of American Psycho gets a slick new 4K Ultra HD Blu-ray re-rerelease as a deluxe SteelBook from Lionsgate. You get the same exact 4K and 1080p Blu-ray discs as before, but now you get some fancy packaging. Currently exclusive to Best Buy, this release of American Psycho really is for the die-hard SteelBook collector or for someone who hasn't yet picked up this excellent 4K release. If you already have the set, you're not getting anything new in the disc department you don't already have. As a disc release, it's still excellent offering up a terrific A/V presentation. Highly Recommended.

"All handsome, rich, successful 27-year-old Patrick Bateman (Christian Bale) wants to do is fit in. He buys all the right clothes. Shops only at the best places. Listens to the "it" bands like Huey Lewis and the News and has an affinity for Phil Collins. He dines daily with his friends Bryce (Justin Theroux), McDermott (Josh Lucas), and Luis (Matt Ross). When they're done running up huge tabs at the trendiest restaurants, they're doing lines at the hippest nightclubs in New York. When Patrick isn't isn't returning his tapes or tending to his rigorous daily self-care routine, he's torturing and murdering women in increasingly violent and sadistic ways… and no one seems to notice.

American Psycho hit theaters right as my high school career was coming to a close. It was a big movie of the winter season courting any amount of controversy a movie based on a Bret Easton Ellis novel could for its extreme amount of violent content and treatment of women. I dutifully stood in line opening night, plunked down my hard-earned cash from my part-time job, and sat in a darkened theater expecting to be amazed. I didn't get it. While funny and violent, a lot of the satire flew right past me. Even though I was a child of the 80s, I didn't live anywhere near that side of it. It's only as the years moved on and I saw people I knew drift towards that sort of material-centric life where the places you ate, drank, and the labels you wore once then threw out were most important that I started to actually get this film."

In the same way Beetlejuice watches The Exorcist, American Psycho just keeps getting funnier every time I see it. As I'm closer to 40 than I was when the film first hit theaters, I have an ever-growing appreciation for its biting cultural satire, hyper-violence, and its sadistically dark sense of humor. I hadn't seen the film all the way through in almost 14 years and I was worried that the film had passed its expiration date. I'm glad to see that worry was for nothing. While many of the references may be culturally dated, the film's satire is just as biting as it ever was. If anything it may even have some more teeth if you're at all interested in dissecting modern cultural cupidity. 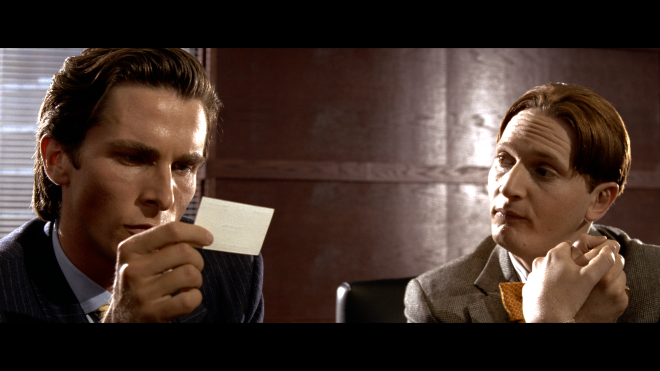 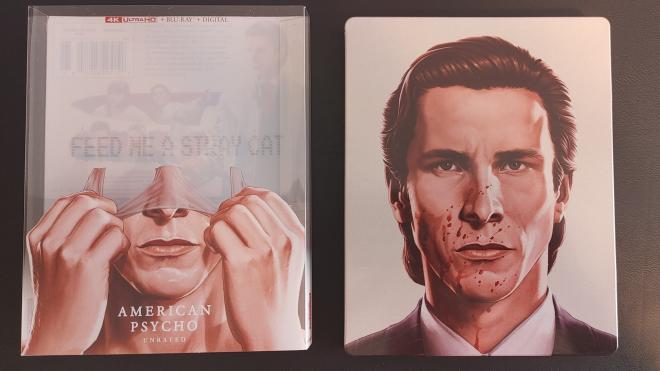 Lionsgate upgrades American Psycho to 4K with a two-disc 4K Ultra HD Blu-ray + Blu-ray + Digital set. Unfortunately, the included Blu-ray is the exact same disc from 2007 and has not been upgraded. All discs are housed in a deluxe new SteelBook exclusive to Best Buy with a plastic slipcover accent to the artwork The 4K Blu-ray disc loads directly to an animated main menu with traditional navigation options. All previous bonus features and new extras are included on the 4K disc. 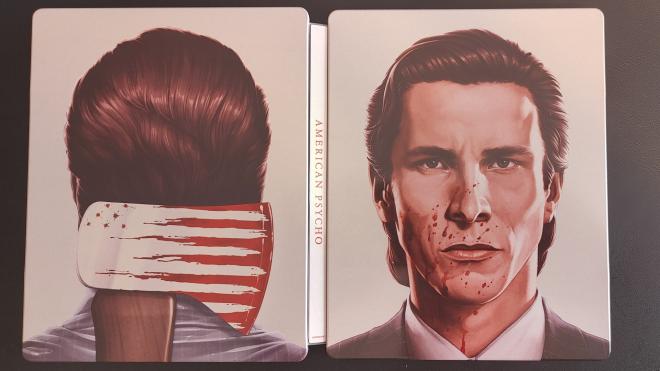 "When American Psycho first hit Blu-ray, it simply repurposed the old DVD master. Thankfully Lionsgate went back to the well for this native 4K  2.35:1 2160p transfer with Dolby Vision and HDR10, as the results are a spectacular improvement over the previous Blu-ray. I really and truly wish I could source images from this disc because it is a night and day difference. It shouldn't be all that surprising considering the vintage of the previous disc but suffice to say fans should be very happy with this new 4K Ultra HD release.

Set aside improvements in detail, colors, black levels, whites, contrast - the first thing you're going to see and appreciate is the simple fact that the numerous and constant instances of speckling and staining and the outright noisy grainfield have been taken care of. This is a fresh sparkling presentation and it shows. Details are immaculate, allowing you to fully appreciate the sterile soulless life Patrick has built for himself. Facial features, deconstructed jackets and clothing, and the film's excellent 80s production design are all on display. The film grain is present and is nicely resolved without being noisy or intrusive." 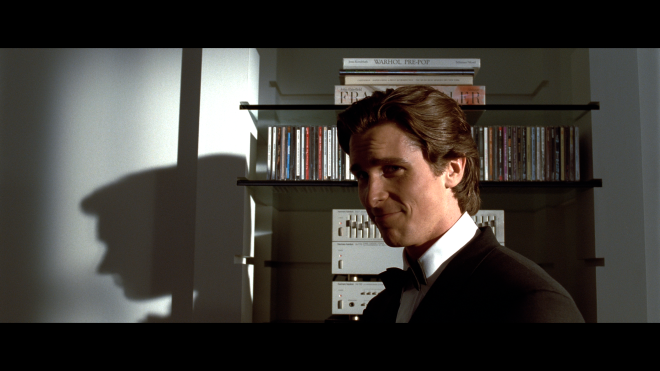 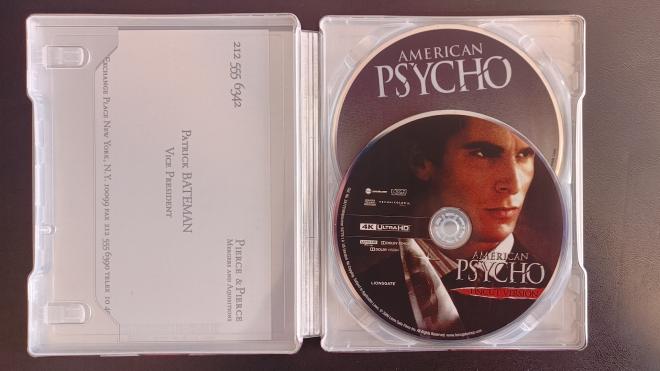 "The extra channel spacing helps give big scene sequences a lot of life. Anytime Bateman and his pals are in a big empty restaurant or a loud and busy club, you can really feel and appreciate the added room this mix affords. You also get a great sense of distance when that chainsaw revs its engine down the hallway. Levels are spot on without any sort of softness issues to report. As far as object-based activity, there really isn't much to speak of save for one terrific element: the narration.

This probably is one of my favorite uses of object-based activity, the mix uses the vertical channels for Patrick Bateman's narrations. It comes at you as this eerie disembodied voice from God and it's really effective without smashing out other sound elements. When he's not narrating, those channels are mostly used for adding space to various busy locations. The scene in the bathroom where they're trying to do coke that's been mixed with sweetener is a great highlight of the activity in the room. Taken as a whole it's probably not the best or most aggressive Atmos mix ever released, but it works beautifully for this film offering up plenty of sonic treats." 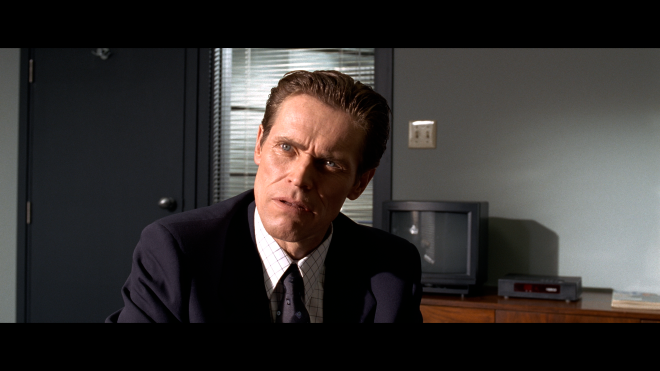 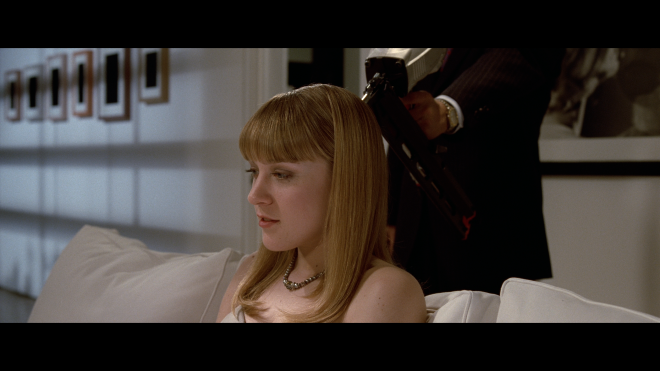 Given that this is a re-release of already existing discs, there's nothing new here. 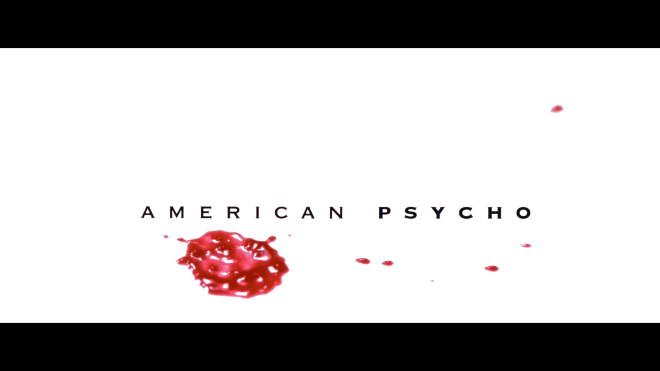 American Psycho certainly isn't a movie for everyone. It split critics and it even divided fans of the novel. But, if you have a wicked sense of humor, Christian Bale's breakout performance is reason enough to add this film to your collection. Now, if you've upgraded to 4K but haven't picked this film up, you now have a good reason to visit your local Best Buy. You're getting the excellent 4K Ultra HD Blu-ray disc with the old standard Blu-ray, but the new packaging is slick. Lionsgate has been on a kick adding a plastic slipcover to their SteelBooks to give the artwork some extra panache - and this one for American Psycho is probably their best yet. If you already have the film in 4K in your collection, it's tough to fully recommend a repurchase just for new packaging. But, if you're a SteelBook hunter, this one is impressive. Highly Recommended

List Price $19.99
Go To Store
See what people are saying about this story or others
See Comments in Forum
Previous Next
Pre-Orders
Tomorrow's latest releases