After a horrible fight, Gomez (Raul Julia) and Morticia (Anjelica Huston) Addams with their children Pugsley (Jimmy Workman) and Wednesday (Christina Ricci), their butler Lurch (Carel Struycken), and their able-bodied disembodied hand Thing hold an annual seance to bring back their long-missing Uncle Fester (Christopher Lloyd). During their latest gathering - Fester returns apparently having been lost in the Bermuda Triangle. But is it really Uncle Fester? It looks like him. Sounds like him. Possibly even smells like him, but the family has their doubts.

I loved The Addams Family when I saw it *gasp* 30 years ago in the theater when I was all of nine years old. It was hilarious to me then and it’s actually a funnier movie now that I’m all grown up. After a terrific stint as the Coen Brothers’ go-to cinematographer, Barry Sonnenfeld made a wise first choice to crack into directing. Watching him in interviews, Sonnenfeld’s natural sardonic wry sense of humor was perfect for this big-screen iteration of everyone’s favorite ghoulishly funny family. It has the look and feel of the classic 60s television show and the original cartoon strip, but it’s bigger, funnier, and far more irreverent than that show could ever be given the broadcast constraints of the time period. 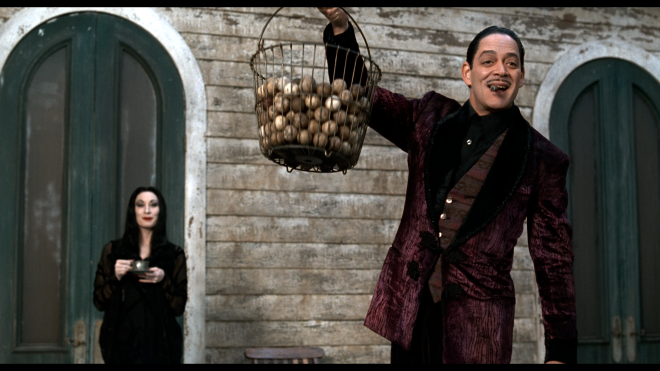 Now I’m not saying this Addams Family is better than that Addams Family - they’re both great and amazing and I love them both. I simply find myself naturally leaning into this Addams Family’s particular sense of humor. Both are steeped in sarcasm, but with this film, the humor can appeal to a child-safe audience but with enough adult innuendo that the jokes can work differently the older you are and still be damn funny. I watch this movie every couple of years and I'm still rediscovering old jokes that I think are funnier as an adult than when I was a kid.

Sonnenfeld’s comedic timing as a director and the film’s excellent script by Caroline Thompson and Larry Wilson are all highlights of the show. But this movie wouldn’t be anything without its cast. This is an example of how a casting director got everything perfect. Raul Julia defined Gomez Addams for a generation. Anjelica Huston was born to play Morticia. Jimmy Workman and Christina Ricci were the perfect diabolical duo of Pugsley and Wednesday - Ricci often steals the show. Then we have Christopher Lloyd as Uncle Fester - or rather the possible impostor Fester. He definitely took the part in a different direction than Jackie Coogan but his own brand of pent-up energy makes this new Fester feel right at home. Also special shoutout to chameleon actor Dan Hedaya. Doesn’t matter if he’s a scumbag gangster, a deposed Central American dictator, or in this case a conniving accountant, Hedaya is great in everything he’s in. 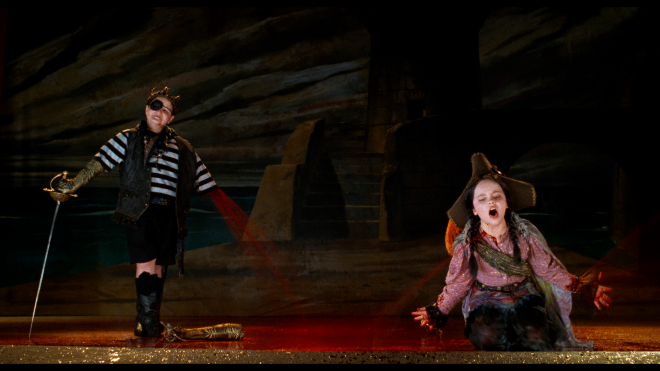 Now 30 years after the film’s original theatrical release we have the 2-minute longer More Mamushka Edition. As far as plot and story go - there’s nothing different. The only thing that’s changed is we now have the full Addams brothers song and dance number as Sonnenfeld intended it to be seen fully restored from the original negative. I can see why they maybe wanted to quicken the pace a little with this sequence, but the added jokes and dance gags are a hoot. You now can fully appreciate the impressive choreography and physical comedy timing that went into the number. It doesn’t change the film, just gives you more to enjoy. Now if there’s an extended version of Addams Family Values floating out there awaiting a 4K Ultra HD Blu-ray release, I’m here for it! 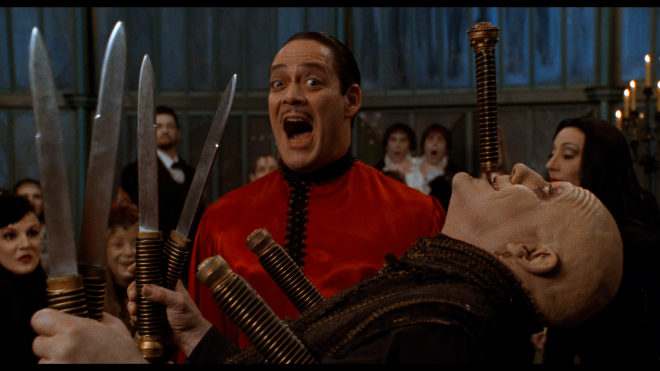 Vital Disc Stats: The 4K Ultra HD Blu-ray
Celebrating 30 years of ghoulish hilarity, The Addams Family comes home to 4K Ultra HD Blu-ray in a single disc 4K UHD + Digital slip. The disc is housed in a standard sturdy keepcase with identical slipcover artwork. The disc loads to a static image main menu where you can opt to watch the Theatrical Cut or the More Mamushka Edition which runs roughly 2-minutes longer.

NOTE - As of this writing we haven't been able to source new images from the 4K disc. as soon as we're able, we'll swap out the images and hopefully be able to include a comparative video example as well. 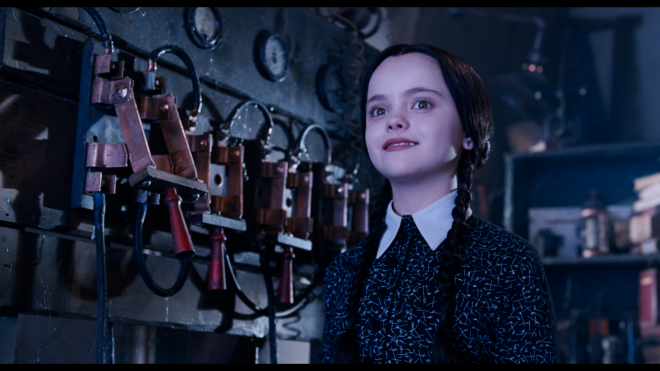 With a fresh restoration effort and remaster supervised by Sonnenfeld, The Addams Family is in excellent shape looking better than ever thanks to the new native 4K Dolby Vision (and HDR10) transfer. Past Blu-ray and DVD releases were terribly rough-looking contending with crush issues, print wear and tear, and some overused edge enhancement. None of those issues are apparent here - or at least to that severity.

The main issue for this new transfer is one that’s been the primary problem for all past releases and that’s the early digital and optical compositing for visual effects. Plate shots where Thing has been inserted are still soft. Optical effects like the golfball flying towards and smashing through the Judge’s window, the big effects-driven climax still look a bit rough with thicker noisier film grain, inconsistent black levels, etc. However, with that in mind, this new transfer mitigates those issues. They’re cooked in so without completely redoing them they can’t get much better than they appear now. These really are small nitpicks of a transfer that has so much to offer longtime fans of this artistically visual film. Throughout, details really popped for this new transfer. Facial features, the clothing textures in Gomez’s elaborate and ornate robes, and the intricate production design and set work really come to life. There’s so much to see and absorb in this film and now it feels like you can really take it all in - which is important because there are so many great sight gags. Film grain can fluctuate a little from shot to shot. This is largely dependant on the visual effects. Some of the early digital composites are a bit on the softer side where old-school optical effects had a bit noisier grain structure. There’s nothing here to suggest any smoothing or DNR - at least nothing so obvious as to ruin the overall look of the film. The big Mamushka party sequence (in both versions) had a more prominent grain presence but nothing distracting or inorganic. Dolby Vision (and HDR10) work their magic in numerous ways. The most noteworthy aspect of this transfer is the improved black levels and shadow separation. Past releases really struggled with dark clothing against black shadow backgrounds. Some bits are still a little iffy, but by and large, there’s enough separation you can tell that some characters now are actually wearing a dark green or blue outfit and not become a floating head in the shadows. Colors pick up a nice kick where it counts. Primary red, blues, and yellow all pop nicely considering the dark ominous tone of the film. Morticia cutting the blossoms off the roses are an appropriate color of crimson red. The blood of Pugsley and Wednesday’s performance is spot on! Overall I’m very happy with this new transfer. It breathes new life into one of my childhood-era favorites so it’s a real treat to have it looking better than ever. I said it before and I’ll say it again, it’s time for Addams Family Values to hit 4K too! 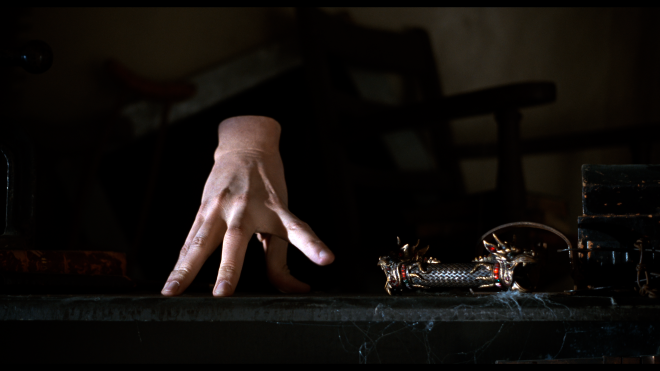 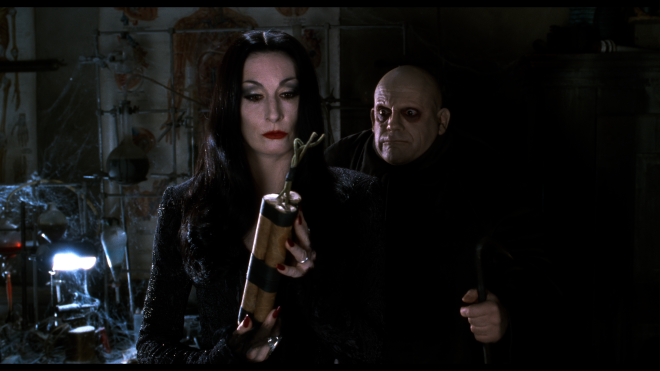 As much fun as it would have been to get a new object-based audio mix, we’re treated to the same great DTS-HD MA 5.1 mix of old. This mix has never been a problem and was actually the one real bright shiny spot for the old Blu-ray from 2014. It’s active and engaging at all times with plenty of surround activity. It might not punch a lot of LFE but it’s still got oomph where it counts. Kicking in DTS Neural:X helps expand the soundscape in an effective way and makes the film sound bigger with more presence to some of the side channels. If you’re outfitted for that function definitely kick it on. 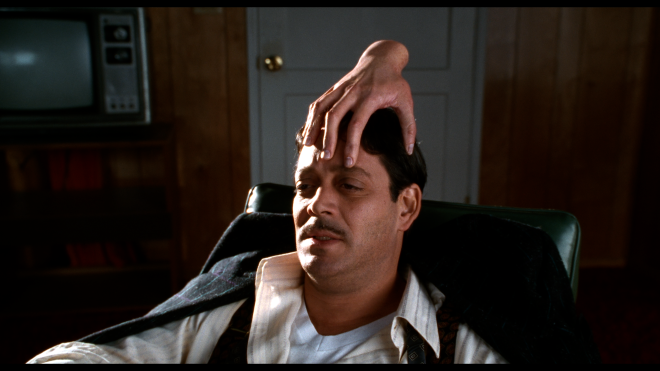 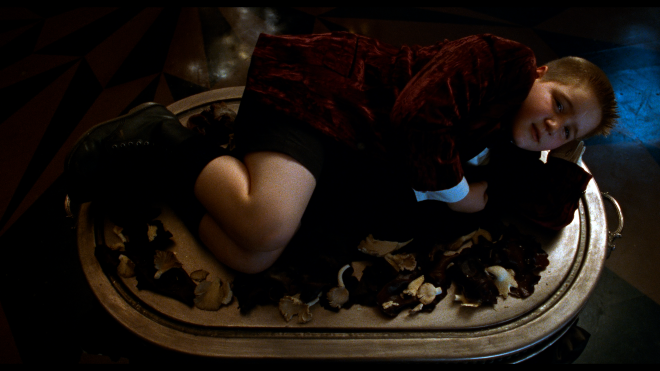 Not the biggest or most robust collection of extra features, this is at least something more than just a couple of trailers from the past Blu-ray. Unfortunately, the new material with Barry Sonnenfeld is all internet video conference footage that isn’t the best to look at - but still, it’s something. I would love a Sonnenfeld commentary, especially because this was such a difficult movie to shoot and get right, I’d love to know some of the stories. Maybe next time. 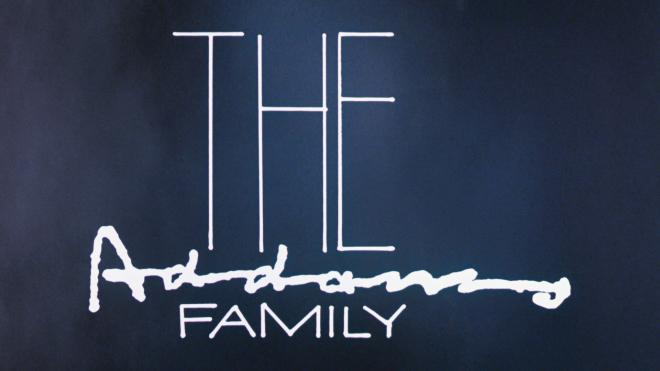 The Addams Family is a 90s comedy classic. First-time director Barry Sonnenfeld delivered a terrific updated version of Charles Addams's irreverent cartoon. From the late great Raul Julia to Angelica Huston to Christopher Lloyd, Christina Ricci, and Jimmy Workman, the cast is perfect in their respective roles. I thought it was funny as a kid, but as an adult, the jokes and gags work on a whole other level of hilarity.

Paramount gives The Addams Family a fitting introduction to 4K Ultra HD Blu-ray. There are some baked-in issues that can’t really be “fixed” - but this new native 4K Dolby Vision (and HDR10) transfer allows this great film to look better than ever. The same great audio mix of past releases is brought back, and we get a couple of new bonus features even though they’re unfortunately not very expansive. If you’re a fan of this 90s comedy, it’s well worth the upgrade. Recommended.