Leatherface is the stylized, promising eighth installment to the beloved franchise, but sadly, the prequel falls short of being a memorable origin story to an iconic horror figure. Imported from Germany, Turbine Media Group brings the latest entry to 4K Ultra HD as an attractive FuturePak combo packaged with a highly satisfying video and an excellent pair of DTS-HD tracks. Along with a good selection of supplements, this collector's FuturePak edition offers a notable upgrade and makes for a Recommended addition to the library.

As far as prequels go, Leatherface isn't all that terrible, but it isn't all that good either. This eighth installment to the beloved franchise exists — and even endures — somewhere comfortably in "middle-of-the-road" territory. As any horror-hound already knows, there are far worse entries out there that attempt to take fans back to where the nightmare began and ultimately fail — The Texas Chainsaw Massacre: The Beginning, Exorcist: The Beginning, Prometheus and Rob Zombie's Halloween just to name a few. The danger in telling an origin story to an iconic horror figure is in either turning the monster into a sympathetic character or ruining the very mystery that makes them such a terrifying creature. The unknown is a big part of what makes them a frightening menace. Giving the monster a motive or explaining their genesis more often than not succeeds at lessening the terror.

Amazingly, this entry from French duo Julien Maury and Alexandre Bustillo (Inside, Livid) makes a decent attempt at expanding the mythos of the franchise and surprisingly avoids mucking it up. By favoring a story centered around the titular character's rise as the demented cannibal instead of the usual grisly carnage expected of the series, we have a movie that works both as a continuation of the series as well as a standalone tale about a troubled young man's turn into a terrifying, chainsaw-wielding maniac. Following Jedidiah Sawyer (Sam Strike) as part of a gang of escaped inmates adds an amusing classic grindhouse flair to the proceedings, especially with Ike and Clarice (James Bloor and Jessica Madsen) almost serving as darkly twisted nods to Badlands and Bonnie and Clyde. The dingy, sweltering cinematography of Antoine Sanier further complements this horror exploitation aesthetic.

Granted, Jedidiah's aforementioned turn does come a bit sudden and quick, if not also too easily. Strange as it may sound, we could even argue that his transformation eventually feels unearned, making the ending feel somewhat rushed. Personally, the best part of Maury and Bustillo's otherwise strong effort is the gang of inmates and their captives. I would have liked more of the sadistic couple terrorizing the Texan countryside while evading capture by the equally perverse and ruthless Ranger Hal (Stephen Dorff). At the very least, it was interesting to see Jedidiah torn between surviving those lunatics while protecting nurse Lizzy (Vanessa Grasse) and the hulking mute friend Bud (Sam Coleman). The madness and callous violence surrounding him were affecting him in such a way as to make his metamorphosis into a brutal serial killer who wears the skin of his victims all the more fascinating and distressing.

Sadly, none of this is meant to be, and Leatherface ultimately feels like the product of studio interference. The movie's final quarter is so hurried and oddly paced compared to the rest that it's pretty clear achieving the inevitable conclusion by the 90-minute mark was more important than telling a good story. And that's really a shame because Maury and Bustillo display a great deal of talent and skill behind the camera, giving fans of the franchise a stylized entry that's frankly riveting. Lili Taylor's performance as the scary matriarchal leader of the Sawyer family is not only in line with the series' continuity, but it is also a promising accessory to Leatherface's formation. In the end, her character is just another unfortunate victim in a list of possibilities and "what-could-have-beens." The prequel can best be summed up as an admirable origin story and strong entry to an admittedly floundering franchise.

Vital Disc Stats: The Ultra HD Blu-ray
Imported from Germany, Turbine Media Group brings Leatherface to a 4K Ultra HD Blu-ray as a two-disc FuturePak combo pack. The dual-layered UHD66 disc sits comfortably on the clear plastic panel while a Region B locked, BD50 disc is loose inside its own clear plastic slip. Both are housed inside an attractive gray-and-amber FuturePak case featuring new artwork on the front and back. At startup, viewers are taken to a screen with full-motion clips, the usual options along the bottom and music playing in the background. 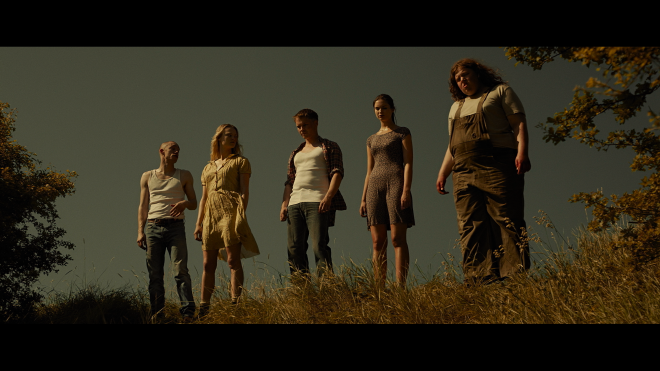 Coming from a 4K digital intermediate, the horror prequel escapes into the hot desert wildlands of Ultra HD, aided and abetted by an excellent HEVC H.265 encode. The native 4K transfer proudly boasts sharp lines in the ragged, dirty costumes of the characters, and the various gory objects decorating the Sawyer house are easy to make out while the surrounding foliage remains distinct from a distance. A few moments are a tad softer than others, which may be the result of an intentional creative choice by the filmmakers, but overall, the picture is highly detailed. With inky rich black levels showering a good chunk of the runtime, visibility within the darkest corners and shadows is strong, exposing every gruesome, squalid nook and cranny of the Sawyer home. This is best appreciated during the movie's final quarter during the poorly-lit interiors, providing the 2.39:1 image with a good cinematic appeal.

The heavily-stylized cinematography noticeably limits the contrast balance, giving the visuals an extra grimy feel that complements the Texan climate's sweltering, muggy heat. Nevertheless, whites come through cleaner with a bit more brilliance, and specular highlights have a crisp, radiant intensity to them while maintaining excellent detailing within the hottest areas. Likewise, colors are also affected by the monochromatic palette, which favors earthy browns, yellows and tans, and the HDR10 presentation remains true to that aesthetic design, furnishing the gory violence with heavy swathes of marigold, butterscotch, sepia, dingy mocha and a mustard shade in the grass. In spite of that, facial complexions appear healthy and accurate to the climate with lifelike textures while reds have a particularly thick garnet tone, and greens range between a faded moss and a dark juniper. (HDR10 Video Rating: 82/100) 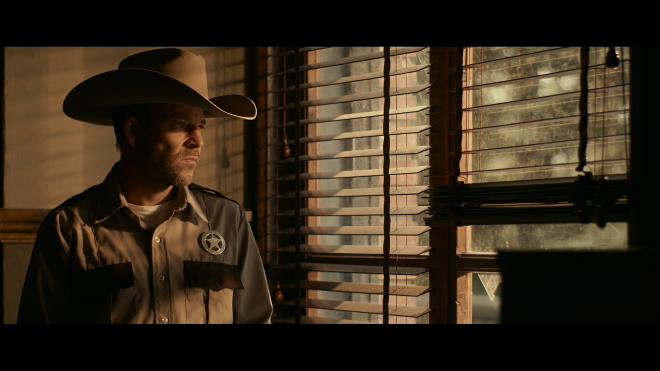 The murderous hillbilly family is on the run, fueled by four excellent DTS-HD Master Audio soundtracks. Owners have the option between a 7.1 surround sound and a 2.0 stereo track in either German or English.

In either case, the lossless mixes display outstanding clarity and balance across the entire soundstage, exhibiting a dynamic and extensive mid-range. Imaging feels spacious with plenty of activity in the background smoothly moving into the off-screen space while maintaining clean separation and distinction during the loud, chainsaw-wielding segments. On the whole, the surrounds are generally reserved for subtle echoing from the blood-curling screams or the faint sounds of local wildlife in the distance. But the hospital escape scene is the most active with the chaos of patients running in every direction, nicely enveloping the listening area. All the while, vocals remain highly prioritized and intelligible in the center, and the low-end provides an appreciable weight and depth to the visuals and musical score. (Audio Rating: 80/100) 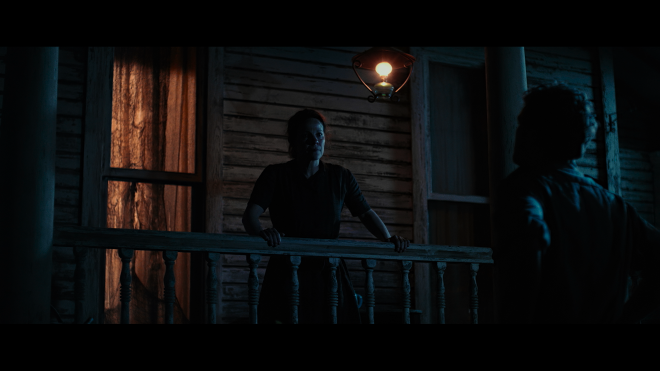 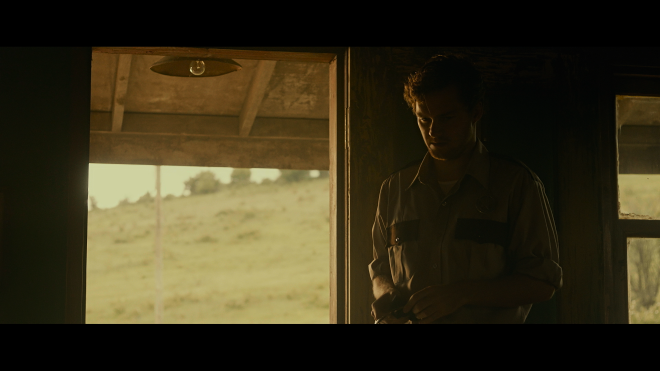 From ordinarily capable French filmmakers Julien Maury and Alexandre Bustillo, Leatherface is a promising eighth installment to the beloved franchise, but sadly, it falls short of being a memorable origin story to an iconic horror figure. Nevertheless, the stylized prequel is a skilled and entertaining entry that, at the very least, expands on the character's mythos. Imported from Germany, Turbine Media Group unleashes the movie to 4K Ultra HD with a highly satisfying HDR10 presentation and an excellent pair of DTS-HD Master Audio soundtracks. Along with a good selection of supplements, this UHD FuturePak edition offers a notable upgrade and makes for a recommended addition to the library.