After forty-five years, Dario Argento's Deep Red remains a beautifully-crafted and stylized suspense thriller with a taut, engaging murder mystery at its center and regarded as both a masterpiece of the giallo subgenre and of the legendary Italian filmmaker. Courtesy of Arrow Video, the cult classic arrives on 4K Ultra HD as a two-disc Limited Edition collector's package, featuring a gorgeous Dolby Vision video, a fantastic set of DTS-HD mono tracks and a treasure trove of bonuses to keep die-hard fans busy for hours. This latest collector's edition also includes other goodies, making for a Highly Recommended addition to the UHD cult library.

Owing a great deal to Alfred Hitchcock, Dario Argento's Deep Red plays almost like a subtle love letter to classic Hollywood murder mysteries and to any number of the director's influential films. In truth, the Italian thriller makes this apparent fairly soon in a plot about a stranger who incidentally stumbles onto a murder and all the major characters quickly become likely suspects. The relationship that develops between the two leads, British jazz musician living in Italy Marcus Daly (David Hemmings) and local news reporter Gianna Brezzi (Daria Nicolodi), charms the screen with the sort of spat and romantic tête à tête we'd expect from a film of the Golden Age of Hollywood. The sly nod to Edward Hopper's Nighthawks is another clue to the filmmaker's homage-like intentions. This is not something traditionally seen or expected in an Argento production — a fun, comical script with a lively little affair at the center, adding humor to an otherwise standard Giallo flick. Part of the film's value and appreciation comes from watching a happenstance fling that's reminiscent of a classic noir blossom amid a grisly murder.

The mystery itself is engaging enough and intriguing, offering plenty of good chills, especially the mechanical doll that scurries across one victim's room, but outside the shocking final reveal — one of the movie's hairier moments — the plot is a run-of-the-mill whodunit plot. And thanks to the cheerful performances of Hemmings and Nicolodi, the off-the-wall chemistry of the two characters keeps the story from sounding its own death knell, proudly displaying its classic influences in elegant style without being overt or blatant. Yet, the film refuses to be condensed or abbreviated as a simple Hitchcockian celebration or a typical bloody Giallo due to Argento imbuing his usual graphic acts of violence with a sophisticated, refined style. There's an artistry to his technique and in the way he builds tension by letting the camera linger and loiter, allowing audiences to sit in an air of silence and gaze at the lovely production design. Daly walking down a long hallway decorated with creepy paintings of dead faces is a prime example of this. It's all part of a sluggish, apprehensive pace, accentuated by the unorthodox sounds of Goblin. 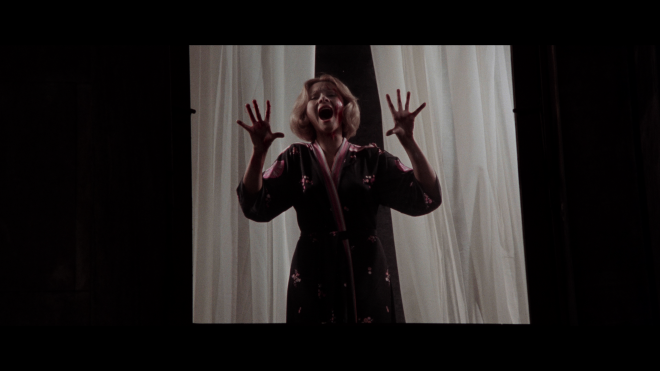 Ultimately, Deep Red is one of Dario Argento's best efforts, a masterwork of suspense and mystery that proudly stands as a primer of the Giallo subgenre. Furnished with an elaborate, hypnotic style and amusing chemistry between the two leads, this taut, beautifully-crafted thriller is a subtle celebration of the filmmaker's influences. Of course, to really enjoy the finer aspects of this classic mystery thriller, one must watch the full-length, uncensored Italian version. The U.S. release sadly removes over twenty minutes of footage, from a few bits of graphic violence to the romantic banter of Marcus and Gianna, which is essential to the film's overall enjoyment. It's a must-watch for fans of the genre and a terrific precursor to the genius of Suspiria.

Vital Disc Stats: The Ultra HD Blu-ray
Dario Argento's Deep Red arrives courtesy of Arrow Video as a two-disc 4K Ultra HD Limited Edition box set. Inside an attractive, sturdy black & red cardboard box, a black, slightly thicker keepcase houses pair of Region Free, triple-layered UHD100 discs with the first sitting comfortably on a center spindle while the second is on the opposing panel. The first disc contains the original full-length Italian version that runs 127 minutes long, and the second comes with the shorter English-dubbed cut clocking in at 105 minutes, which is ostensibly called the "Export Version." The keepcase features six double-sided lobby cards and new reversible cover art, and the side-sliding box also contains a folded, double-sided poster along with a 60-page booklet. That booklet contains three analytical essays by Alan Jones, Mikel J. Koven, and Rachael Nisbet. At startup, the disc goes straight to the menu screen with full-motion clips and music playing in the background. 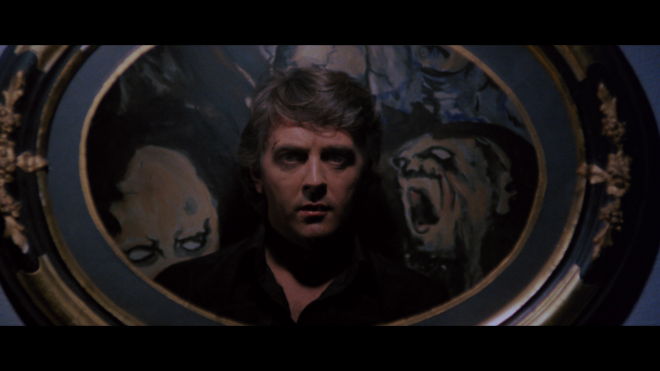 The Giallo classic questions memories and visions on Ultra HD, equipped with a lovely, often hypnotic HEVC H.265 encode that offers a notable upgrade over Arrow Video's previous Blu-ray release. According to the accompanying booklet, the original 2-perf 35mm Techniscope camera negative was digitally restored and remastered along with other 35mm prints to reassemble and recreate the full-length Italian version of the film. The reason for this was because the original negative was physically cut and edited for the shorter English-dubbed version, which is available on a separate UHD disc, so viewers should reasonably expect some varying levels of wear and tear during those restored sequences. Thankfully, Arrow's efforts have terrifically paid off, and the results are truly excellent in spite of those unavoidable visual fluctuations.

Benefitting from an improved, spot-on contrast balance, the native 4K transfer enjoys better overall definition while showered in clean, brilliant whites, especially in Marcus Daly's sleek and cool outfits. The brighter picture allows for great clarity and visibility in the far distance, making the various objects decorating the background plainly visible. The groovy 70s home decor and clothing show outstanding textural details, the fine lines in the Italian architecture are discrete, and the specular highlights supply the light fixtures with a brilliant but pretty narrow bloom without ruining the sharper aspects while adding a crisp, striking glare to metallic surfaces, most notably in the murder weapons. The few minor instances of poor resolution and softness are noticeable but thankfully, nothing too egregious or distracting. 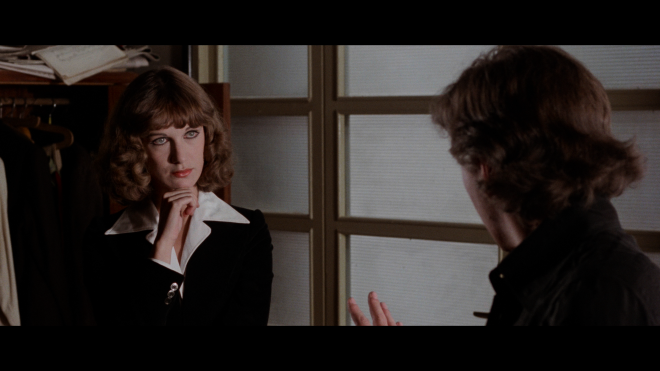 Besides, the biggest gain in this Dolby Vision HDR presentation comes from the enhanced wider color gamut, furnishing the sensational visuals with a more vibrant and energetic palette that feels true to the genre. While the blues and greens are more accurate and better saturated than their HD SDR counterparts, the impressive range of reds, in particular, distinctly bring the film to life, bathing various scenes from a rich rose and crimson to ruby garnet and scarlet tones, sometimes within the same sequence like in the opening at the theater. Likewise, secondary hues are also animated and more full-bodied, like the sepia, golden yellows and sandy tans in the home of Carlo's eccentric mother or the varied selection of browns and oranges in Marcus's house.

All the while, black levels are luxuriously opulent with exceptional gradational differences in the various shades and a velvety richness in the darkest, pitch-black shadows without completely engulfing the finer details. Throughout, the transfer displays terrific dimensionality and a thin layer of natural grain that's fairly consistent, providing the 2.35:1 image with a lovely cinematic appeal and appreciable film-like quality. (Dolby Vision HDR Video Rating: 82/100) 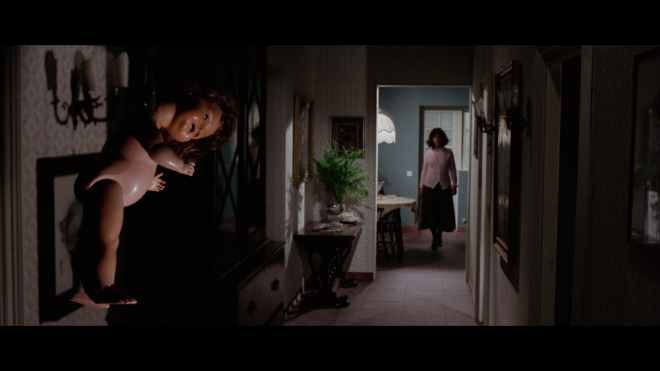 As with the video, the monaural audio tracks were remastered from the original sound negatives for both versions and are presented here in four lossless options: the original Italian mono and an Italian 5.1 upmix in DTS-HD Master Audio but an uncompressed PCM mono for the English-dubbed edit. Personally, I didn't much care for the 5.1 upmix, as it sounded hollow with a strange echo effect in the voices and the atmospherics feeling artificial and forced while the upper frequencies are a tad bright and unnaturally high-pitched during the loudest segments. The two mono tracks are far superior and the preferred choice for enjoying this Argento classic.

Of more interest is the fourth lossless soundtrack attached to the full-length Italian version, which is the one I ultimately found myself enjoying best. As the accompanying booklet explains, the filmmakers did not record a separate English audio option for that Italian cut, so Arrow Video presents this version with a hybrid track that retains the English audio but reverts back to the original Italian with English subtitles for those uniquely restored sequences. And as mentioned above, the engineers at Arrow have done a tremendous job with the film's design elements. For one, the mid-range exhibits impressive definition and outstanding acoustical detailing, especially in Goblin's groovy but dark score with the bass guitar playing a prominent role. So to that, the low end commands a dramatic and authoritative presence, providing the music with a fantastic palpable weight that energizes the room. Imaging displays terrific clarity and fidelity with well-prioritized, precise dialogue reproduction in the center, making for a wonderful, highly engaging lossless mono mix. (Audio Rating: 80/100) 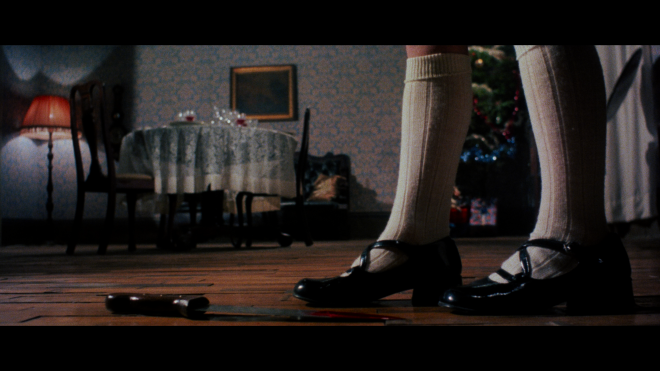 For this Ultra HD edition, Arrow Video ports over the same collection of bonus material from its 2018 Blu-ray release, but they have also culled together a few new additions for this limited box set, which are all available on the UHD disc containing the original full-length Italian cut. 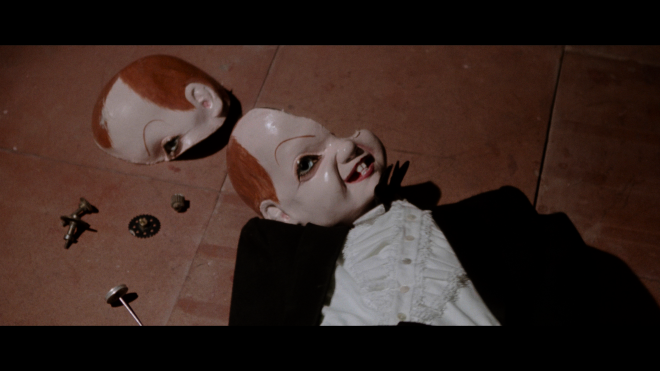 Regarded as a masterpiece of the Giallo subgenre, Dario Argento's Deep Red is a beautifully-crafted and stylized suspense thriller, featuring a pair of amusing leads who are reminiscent of a classic Hollywood romance. After forty-five years, the taut murder mystery remains an engaging and memorable motion picture, often regarded as the masterwork by the highly-regarded, legendary Italian filmmaker. Courtesy of Arrow Video, the cult favorite arrives on 4K Ultra HD as a two-disc Limited Edition collector's package. The Dolby Vision HDR presentation of both versions is a gorgeous and striking upgrade over its Blu-ray predecessors, complemented by an equally fantastic set of DTS-HD MA mono tracks. Along with porting over the same set of supplements as the 2018 Blu-ray release, Arrow has culled together a fresh batch of bonuses for this box set, which includes an informative booklet, six lobby cards and a folded poster, making the package a highly recommended addition to the UHD cult library.