Driven by a familial drama and some weighty themes, Black Widow is a rousing swansong espionage thriller that ranks as one of the best MCU entries thanks to some exhilarating action and a poignant backstory that'll leave fans wanting more. The infamous Red Room crash lands on 4K Ultra HD with a stunning, demo-worthy video, a marvelous Dolby Atmos track but sadly, a paltry assortment of bonuses. Nevertheless, the overall package is Highly Recommended.

After ten years of playing sidekick and supportive colleague to the super-heroic exploits of the men in her life, highly skilled spy and deadly assassin Natasha Romanoff (Scarlett Johansson) is finally allowed to lead her own independent campaign in Black Widow. Even so, the Avenger's first solo feature, which simultaneously serves as the character's swan song, arrives with a mix of emotions ranging from "too-little-too-late" to arguably one of the best MCU entries to date. At the same time, it's somewhat strange to see the titular hero upstaged in her own film by the introduction of a new heroine, Natasha's younger sister Yelena Belova (an absolutely delightful Florence Pugh), who will be taking up the mantle of Black Widow. In spite of that, the twenty-fourth installment is a rousing, surprisingly moving superhero flick that works as a standalone espionage thriller grounded by familial drama and driven by perceptively weighty themes.

Impressively, director Cate Shortland (Lore, Berlin Syndrome) navigates riveting, white-knuckle action with a confident expertise that elevates and advances the plot rather than hinder it or be purely for visual spectacle. Granted, the climactic showdown against Red Room leader Dreykov (Ray Winstone) and his assassin with photographic reflexes Taskmaster (Olga Kurylenko) is one of the most spectacular, edge-of-your-seat set pieces in the MCU. Nevertheless, these typical and largely expected head-to-heads are in the service of the plot or are the development of previous events leading up to the clash. There is a deeper motivation prompting and justifying the large-scale, wildly-imaginative fight sequences. Besides, Shortland skillfully balances the bombastic with brief character-driven moments of poignant insights that give this backstory prequel some thoughtful substance, albeit some far more subtle and nuanced than others. 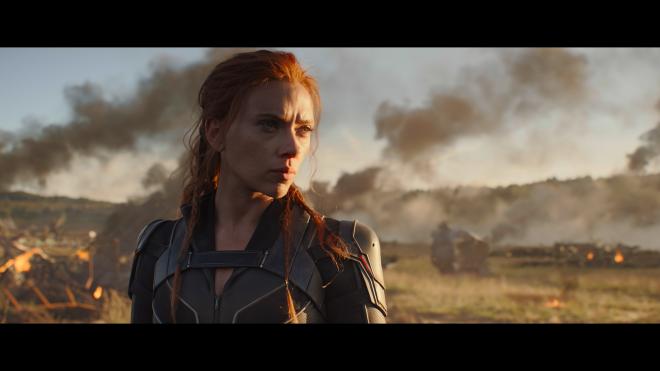 A favorite cleverly understated moment is Yelena's elated excitement for her vest with multiple pockets, which terrifically echoes a familiar sibling squabble as well as displays the chemistry of the two actors. More importantly, this simple banter, which plays as though for an offhand laugh, touches on a deeper truth coursing through the veins of the script: the depiction of female heroes and the exploitation of the female body within the film industry. Yelena's appreciation for an outfit that is actually practical, sensible and even authentic without having to accentuate the body speaks to this notion both indirectly and rather loudly. This is more to the point when contrasted with Winstone's Harvey Weinstein-like Dreykov in a literal position of power controlling and manipulating young women to be little more than a financial tool.

The other favorite pivotal moment is the awkward family dinner with Alexei (David Harbour) and Melina (Rachel Weisz) as the pseudo-parents who not only turned out to be frauds but also terrible role models. The entire scene is just as comical and playful as it is poignant and tragic, which again speaks to Shortland's talent. Weisz's surrogate mom bought into the very system that now exploits other women and even helped to perfect it, which really taps into a whole other area of discussion. Meanwhile, Harbour's self-centered father figure only sees physical strength as a virtuous accomplishment and seems incapable of genuinely listening to his daughters. Then, adding to the tragedy is Don McLean's "American Pie" sung by the characters but failing to see the irony of the lyrics being about mourning the loss of childhood innocence and the disillusionment of the American Dream. Ultimately, Shortland's Black Widow is simply a marvelous installment to the MCU and a sensational finale to a beloved superhero.

Vital Disc Stats: The Ultra HD Blu-ray
Walt Disney Studios Home Entertainment brings Marvel's Black Widow to 4K Ultra HD Blu-ray as a two-disc combo pack with a flyer for a Disney Digital Copy. When redeeming said code via RedeemDigitalMovie.com or MoviesAnywhere, users are granted access to the 4K digital version in Dolby Vision with Dolby Atmos. The dual-layered UHD66 disc sits comfortably opposite a Region Free, BD50 disc. Both are housed inside a black, eco-vortex case with a glossy, lightly-embossed slipcover. At startup, viewers are taken to a static screen where owners can choose between the start of the movie or look through the menu. 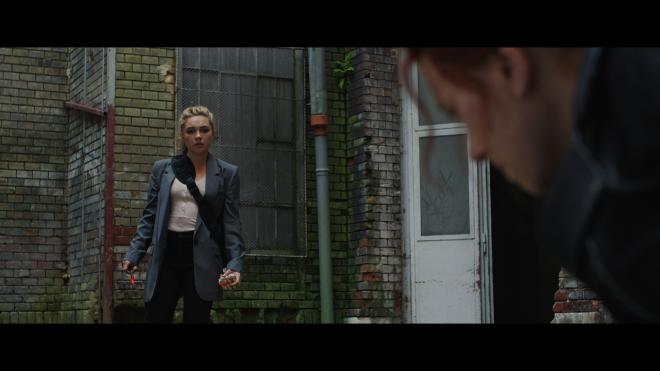 A pair of troubled, fugitive assassins find redemption on Ultra HD, equipped with a stunning, demo-worthy HEVC H.265 encode, which was struck from a 4K digital intermediate.

Shot on various high-quality digital cameras with resolution levels of up to 8K, the freshly-minted transfer sports razor-sharp definition and spot-on contrast balance from start to finish. The stitching, threading and small smudges in the costumes are unmistakable, the individual hairs and whiskers are distinct, and the tiny imperfections along the city streets and buildings are striking. The excellent contrast allows for outstanding visibility in the far distance of exterior shots, and we can plainly make out every object decorating the background of interior sequences all the while maintaining brilliantly intense whites with fantastic variation, such as in Natasha and Yelena's outfits. The Budapest scenes offer some of the most impressive moments as the tiniest bits of debris remain detailed and discrete while specular highlights supply a crisp radiance along the edges of clouds, a tight glow from the blazing sunlight bouncing off the sidewalks and buildings, and a realistic, sparkling sheen on various metallic surfaces.

Presented in its original 2.39:1 aspect ratio, the 4K video is also bathed in inky, raven black levels with exceptional gradational differences between the various shades. This allows for superb visibility in the darkest, velvety midnight shadows that penetrate deep into the screen, providing the image with a beautifully cinematic, three-dimensional quality. Moreover, the HDR10 presentation showers the action with a sumptuous array of colors, especially the candy-rose reds of the various computer monitors and the deep ruby tones of blood or the spirited, vivid greens in the surrounding foliage. Again, some of the most eye-catching moments take place in Budapest where the palette leaps off the screen with a lovely mix of rich tans, buttery yellows, hints of magentas and soft caramel browns. In the Metro, Taskmaster's uniform is a dynamic cobalt blue with a deep, fiery orange lining. Facial complexions appear natural with revealing, lifelike textures, exposing every pore, wrinkle and negligible blemish from a distance.

The only small complaint keeping the overall presentation from a perfect score is the several instances of minor aliasing and a tad of moiré fringes along the sharpest edges, which honestly, are small and trivial enough to be missed by most viewers. In the end, the 4K video is absolutely outstanding with several demo-worthy scenes. (HDR10 Video Rating: 96/100) 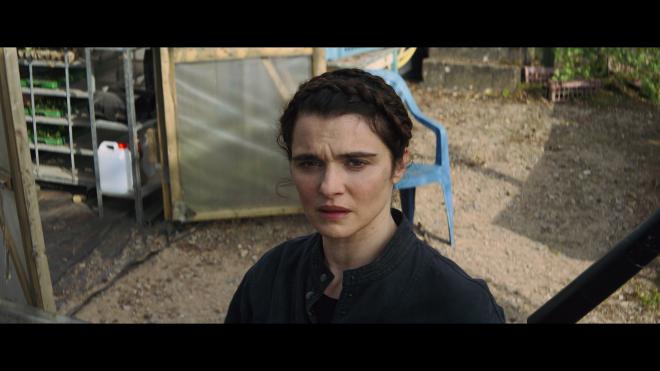 The infamous Red Room crash lands into home theaters with a marvelous Dolby Atmos soundtrack that'll suck viewers into the middle of the action and not let go. The screen is continuously sprawling with a variety of background activity convincingly moving between the three front channels and the top heights, creating a spaciously broad, half-dome soundstage. The musical score keeps things energized, spread evenly across the front of the room with light bleeding into the surrounds and heights. Moreover, the mid-range exhibits superb, room-penetrating clarity and detailed definition in both the instrumentation and during the loudest, ear-piercing segments, such as in the climactic final quarter. All the while, the track maintains precise, accurate dialogue reproduction with appreciable intonation in the performances, and a hefty, robust low-end provides the visuals with a palpable, wall-rattling presence.

The object-based mix continues to impress with plenty of rear activity. From the subtle sounds of wind blowing and leaves shaking in the distance to the bombastic racket of explosions, the audio design maintains an awesome, highly engaging soundscape that places the listener right in the middle of the superhero action. While cars and motorcycles zoom across the room, debris rains down from above and scatters in every direction, and the various floors of the aerial facility are distinctly heard collapsing directly overhead mixed with the noise of rubble and electrical sparks, generating an immersive hemispheric soundfield. Although directionality is satisfying, for the most part, there are a couple instances where sound effects stand out, are easily localized and don't pan convincingly well, such as a helicopter flying overhead early on in the movie. However, outside of those minor, albeit personal gripes, the 3D lossless track is satisfyingly effective. (Dolby Atmos Audio Rating: 92/100) 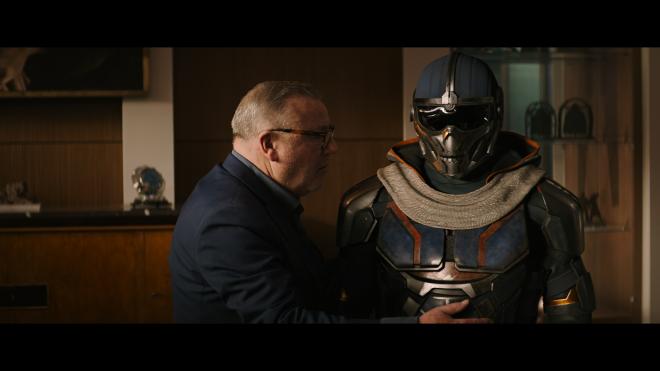 For this UHD edition, Disney debuts Black Widow with a rather paltry selection of bonuses, but they are only available on the accompanying Blu-ray disc. 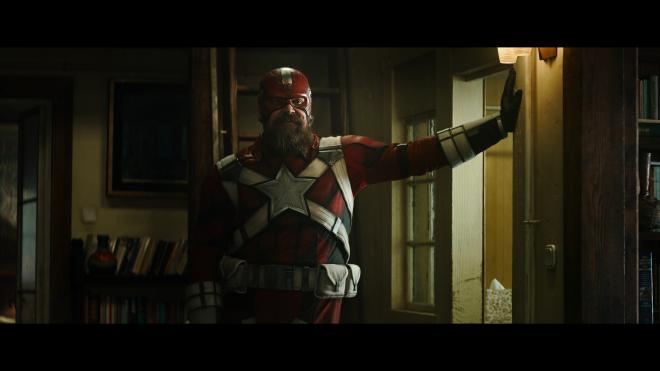 Arguably ten years too late, Marvel's Black Widow is nonetheless a rousing, spectacular swansong to a beloved superhero and easily ranks as one of the best MCU entries. Driven by a familial drama and some weighty themes, the solo feature is essentially an espionage thriller that gives the character some much-deserved justice and a poignant backstory that only leaves fans wanting more. The infamous Red Room crash lands on 4K Ultra HD equipped with a stunning, demo-worthy HDR10 presentation and a marvelous Dolby Atmos soundtrack. Sadly, the Widows make their home video debut with a rather paltry assortment of special features, but the overall package is nonetheless Highly Recommended.