Phillip Kaufman's effectively creepy Invasion of the Body Snatchers remains a well-crafted, memorably relevant remake that delivers the frights along with the drama. The sci-fi horror classic invades 4K Ultra HD with a stunning HDR presentation, a pair of strong lossless DTS-HD tracks and a great set of bonuses. Overall, the UHD package is Recommended.

Philip Kaufman's remake Invasion of the Body Snatchers is a rarity in the history of remakes. The film is as good as Don Siegel's 1956 original, a film that's mindful of its source while adding its own unique, distinctive voice. At the core of Jack Finney's sci-fi novel about an alien invasion where human doubles are born from giant pods is a theme of universal social fears, of a terrifying realization that everyone is being turned into a mindless, obedient vegetable. Kaufman wastes no time in establishing a dark, eerie atmosphere of foreboding, starting with the simple visual of little green pods with pink flowers.

As this sense of chilling apprehension and dread slowly but methodically continues to build, we see unnamed characters in the background running wildly as they're chased by an unfriendly-looking mob. Large, red garbage trucks come and go, mysteriously carrying heaping mounds of dust. More sinister still are the endless stares by unknown, unidentified faces, not only disturbingly looking at one another but also gawking with threatening eyes at our protagonists and as if watching us through the camera.

Unfortunately, our central heroes are completely oblivious to those blank, remorseless stares, and the creepiness intensifies after spending time with Mathew (Donald Sutherland), Elizabeth (Brooke Adams), Jack (Jeff Goldblum) and Nancy (Veronica Cartwright). The terror and scares come from the fear of losing one's identity and individuality, of being transformed into something that lacks humanity and character. The cast is splendid in showing idiosyncratic traits that make them genuine human beings. When they run, they're not running simply for fear of capture but for fear of being assimilated, of losing a sense of self and personal identity. We share in their fear because the world in the background has been gradually and systematically developing around the focal point of the film — a small group of friends and their escape. The new alien society has been encircling the protagonists from the start, and by the time they realize it, it's too late. The horror is already in full effect, and the scary monsters have already won. 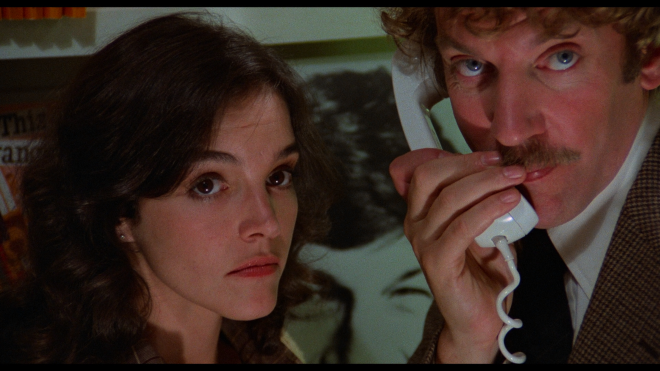 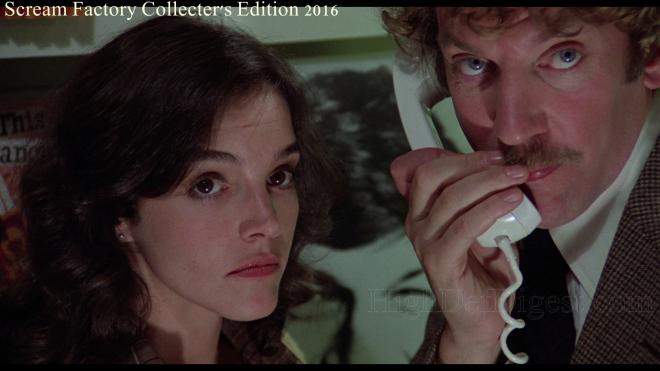 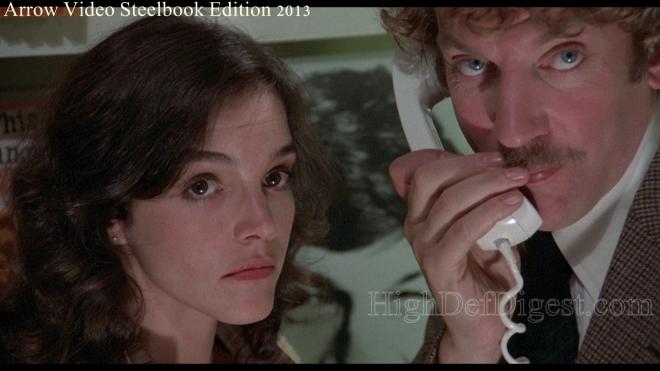 Invasion of the Body Snatchers remains one of the best remakes ever. It's smartly written and well-crafted, thanks largely to Phillip Kaufman's brilliant direction and the amazing cinematography of Michael Chapman. The many dark, obscuring shadows generate an awful feeling of secrecy and brooding evil, intensifying the film's already unnerving and unsettling sense of paranoia. And that final, bleak scene of hopelessness while forced to hear the bloodcurdling screams of the alien creatures is just as shocking today as the first time.

For a more in-depth take on the film, check out our review of the 2016 Scream Factory's Collector's Edition HERE and the Arrow Video SteelBook Blu-ray Edition HERE.

Vital Disc Stats: The Ultra HD Blu-ray
Kino Lorber brings Philip Kaufman's Invasion of the Body Snatchers to Ultra HD Blu-ray as a two-disc combo pack. The triple-layered UHD100 disc sits comfortably opposite a Region A, BD50 disc containing a new HD transfer struck from the same 4K remaster as the UHD. Both discs are housed inside a black, eco-elite vortex case with a slipcover. At startup, the disc goes straight to a static menu screen of the cover art with the usual options along the bottom left corner of the screen. 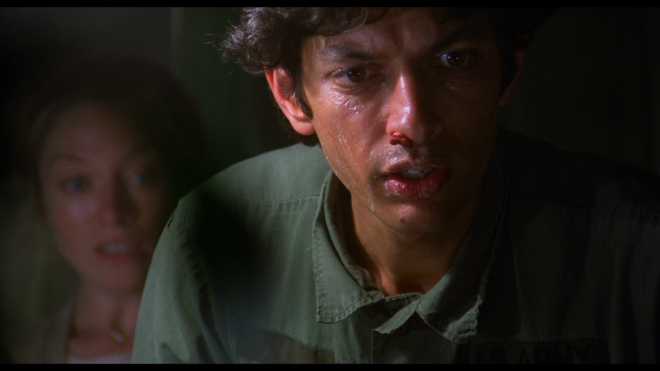 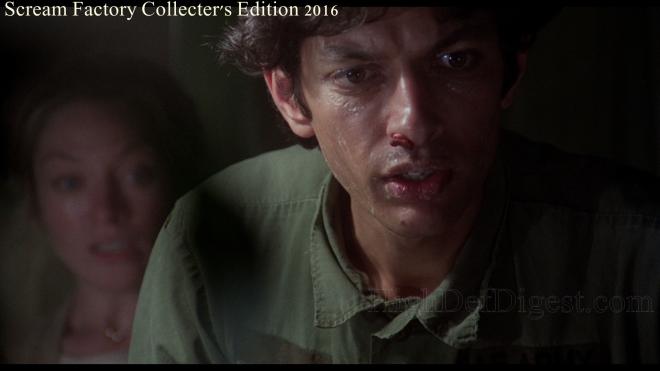 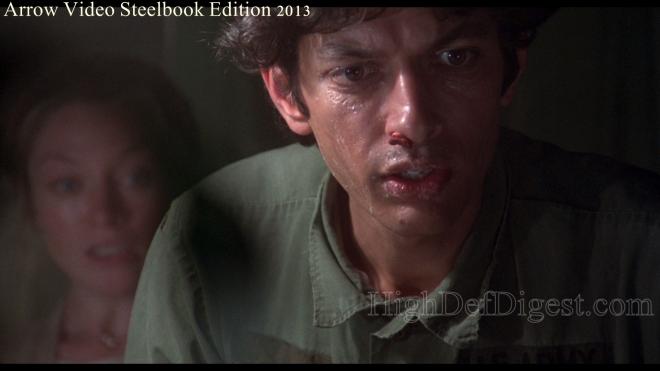 Coming from a fresh restoration and remaster of the original 35mm camera negatives, the native 4K transfer enjoys significantly sharper definition and a better contrast balance, making the overall picture look revitalized and rejuvenated. The small details and imperfections in the homes, buildings and streets of San Francisco are distinct while other bits of information decorating the background, from random people to the lettering of signs, is plain to make out from a distance. Much of the action is showered in crisp, radiant whites, and the specular highlights are one the more appreciable improvements, supplying a vivid brilliance to the hottest spots and along wet surfaces. There still remain a few poorly-resolved areas and softer spots, but overall, the source is in great condition, awash in a consistent fine layer of natural grain. 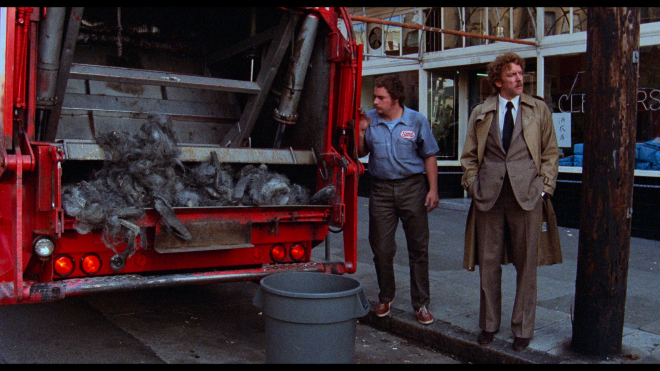 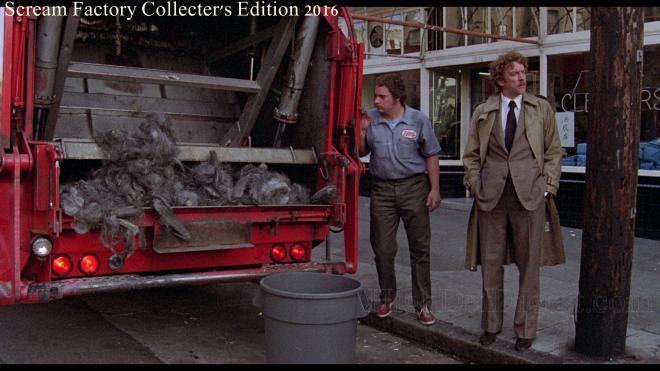 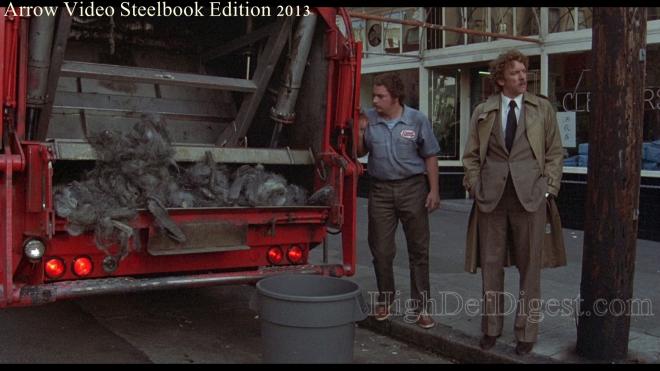 The video's biggest triumph over its HD SDR counterparts, however, comes by way of a markedly better and wider color gamut, furnishing the creepy visuals with an ironically flamboyant and spirited vibe. The Dolby Vision HDR presentation showers nearly every scene in an impressive array of full-bodied, richly-saturated secondary hues, from the deep browns and vibrant tans to the fiery oranges and warm golden yellows of many interiors. Standing out most dramatically are the violet-purple tones in some light fixtures and the lushly animated reds of the garbage trucks and the costumes. Meanwhile, blues and greens are more energetic and lively, and facial complexions appear healthy with a natural rosiness around the cheeks and lifelike textures, revealing pores, wrinkles, the tiniest whiskers and negligible blemishes.

Topping off the very best the film has ever looked on any format is the significantly richer brightness levels, bathing the 4K video in luxuriously inky, stygian blacks with outstanding gradational differences between the various shades. The darkest, murkiest shadows come with excellent visibility of the finer details, providing the 1.85:1 image with appreciable dimensionality and stunning cinematic appeal. (Dolby Vision HDR Video Rating: 94/100) 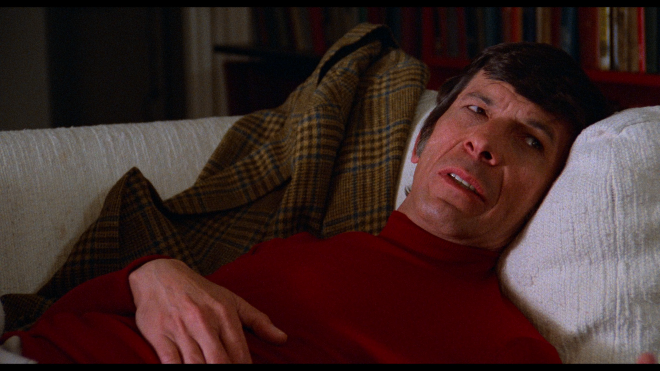 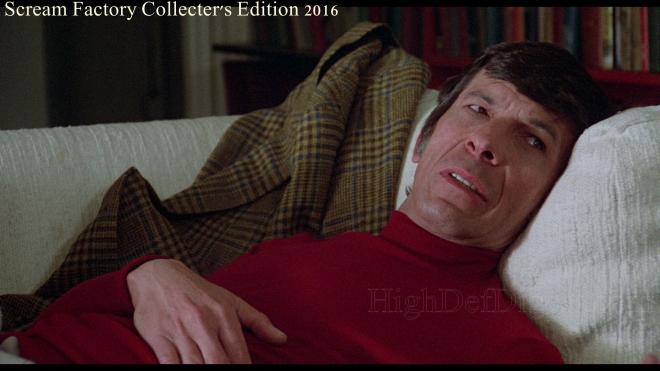 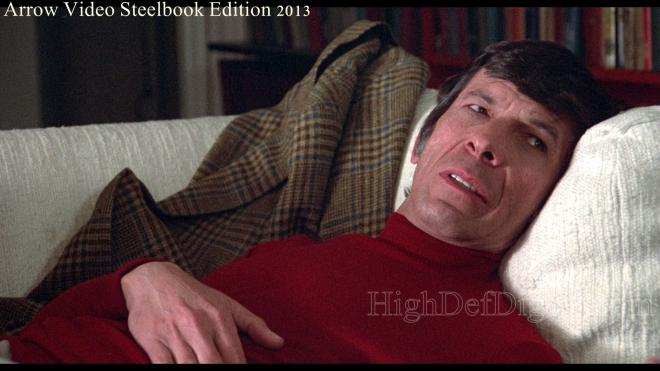 Whereas the DTS-HD Master Audio 5.1 soundtracks on both the Arrow Video and Scream Factory Blu-rays were surprisingly enjoyable, the upmix offering on this Kino Lorber release is rather disappointing and not nearly as good as its DTS-HD MA 2.0 Stereo counterpart, which is ultimately the preferred means of watching the sci-fi horror classic. The 5.1 option feels thinner and rather limited in the upper ranges, creating a pretty uniform and unvarying soundstage that comes across too bright during the loudest moments. Much of the background activity and many of the sound effects feel forced and artificial in the surrounds, made all the worse by also being distractingly louder than the rest of the design, making them easily localized within the room. Like the sound effects, the low-end is also louder than it should, creating an unnatural booming, hollow bass sound that often feels out of place in certain spots.

Thankfully, the second lossless option comes to the rescue and delivers the better choice of the two, exhibiting a more pleasing, broad soundstage with excellent fidelity and full of warmth. Imaging displays crisper, cleaner acoustical definition with wonderfully balanced channel separation and a more detailed mid-range. Although not as loud as the other track, low bass is more adequate and responsive, providing appreciable weight to the music and a few action scenes, and the dialogue reproduction is precise and intelligible in the center. The track also lends itself better to the receiver's Dolby Surround or DTS: Neural:X up-mixing functionality, more naturally and convincingly expanding some of the off-screen atmospherics with realistic directionality and generating a far more satisfying soundfield. (Audio Rating: 74/100) 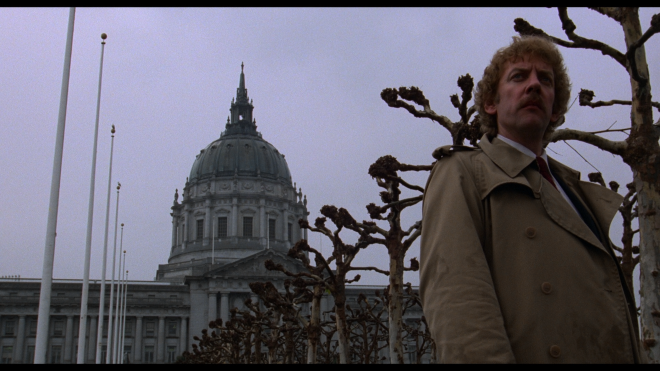 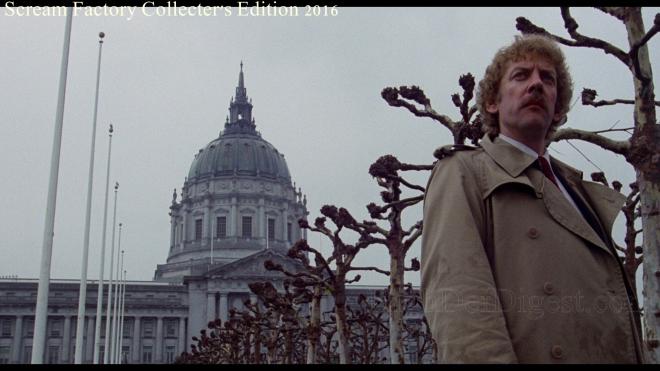 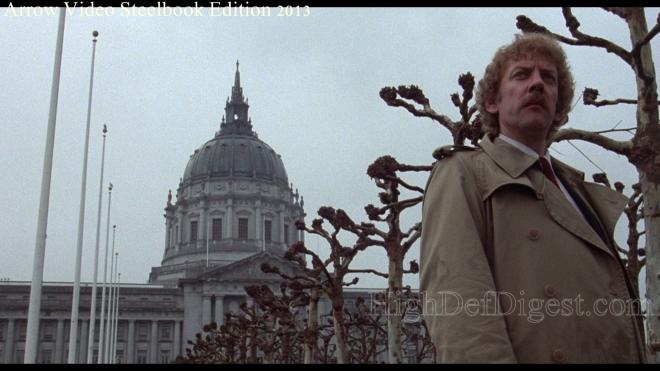 For this UHD edition of the sci-fi horror classic, many of the same bonuses from previous releases have been ported over and contained in the accompanying Blu-ray disc. 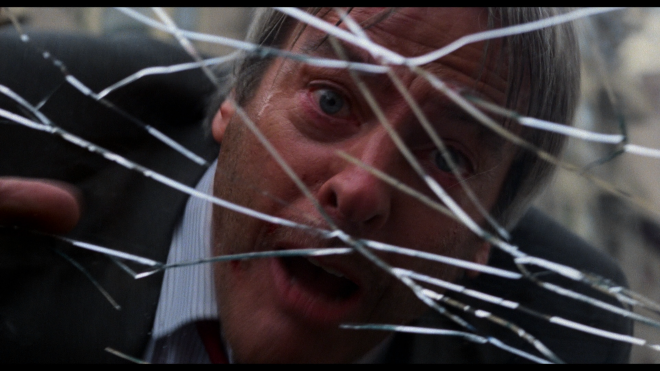 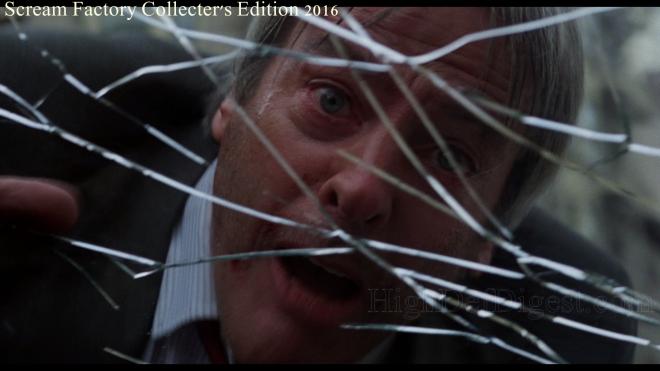 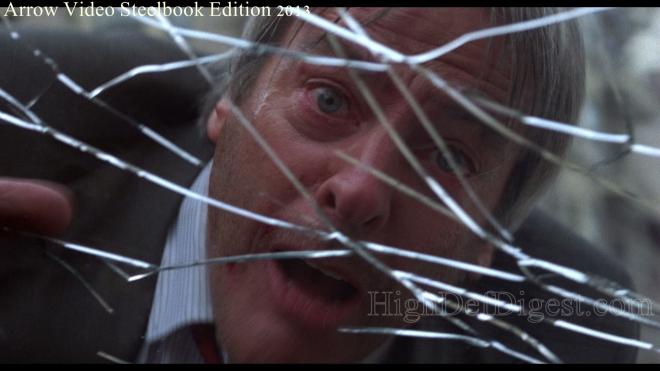 Invasion of the Body Snatchers is a well-crafted and effectively creepy film that delivers the frights along with the drama. Phillip Kaufman's 1978 remake remains a memorably relevant and entertaining feature with beautiful cinematography and an unconventional musical score. The sci-fi horror classic invades 4K Ultra HD with a stunning, near-reference Dolby Vision HDR presentation, swarming home theaters with a noteworthy improvement over its HD SDR counterparts and making it the best the film has ever looked. The UHD edition also lulls viewers with a pair of strong lossless DTS-HD MA soundtracks and a great set of supplemental material. Overall, the package makes for a recommended addition and a must for devoted fans.