Clarence Worley (Christian Slater) might just be the luckiest son of a bitch in the world. While enjoying a Sonny Chiba triple-feature for his birthday, the lonely Detroit comic book store clerk meets young miss Alabama (Patricia Arquette). After three movies and a slice of pie, the two are soulmates. Inside of a day, the two are married. The day after they’re on the run from the mob and the cops after Clarence kills Alabama’s pimp (Gary Oldman) and accidentally leaves with a suitcase of drugs instead of her clothes. Now they’re on the road to Hollywood to sell off the coke, dodge the cops, the mob, and get down to Mexico and enjoy the rest of their lives.

It’s pretty wild to realize we’ve been enjoying the rambling pitch-perfect pop culture dialog, colorful characters, and amazing stories of Quentin Tarantino for 30 years now. There was a time when the writer/director wasn’t a marquee name. Within just a few years we went from having never heard of the guy to films like Reservoir Dogs, Pulp Fiction, and Jackie Brown with his pen attached to flicks like Natural Born Killers and From Dusk Till Dawn with an obvious but uncredited rewrite of Crimson Tide.

I owe it to my sly older sister for introducing me to his movies when I was eleven years old. I don’t remember the movie we were going to see - probably Jurassic Park for the tenth time - but I remember my sister pulling us out of that so we could sneak over to True Romance playing next door because apparently, it had Brad Pitt in it. Neither of us had any idea what the movie was about. She just wanted to see Brad Pitt. I just remember sitting in that theater pissed off for leaving the other movie but then becoming wide-eyed because I’d never seen anything like this before. I’d also never snuck into an R-rated movie before so this first viewing of True Romance comes slathered with an extra sheen of nostalgia of hiding in the back of a freezing cold theater. 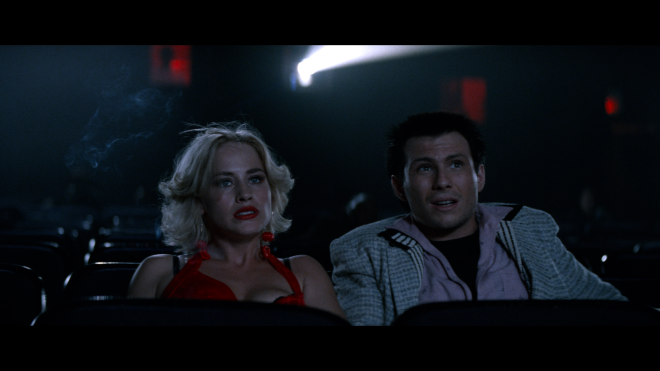 While Quentin Tarantino gets a lot of due credit for his writing of True Romance, Tony Scott deserves a lot of the credit for his time in the director’s chair. This is one of those films where I feel Tarantino was the better writer than he would have been a director. Scott had a style and flair with his movies that allowed for some impressive visuals but kept a close intimacy with the characters. Take the interrogation scene between Dennis Hopper and Christopher Walken. Scott works from a wide shot gradually cutting closer and closer into a closeup adds tension to each dialog exchange, but it also gives the actors room to work the scene. Walken gradually gets funnier while Hopper becomes more solemn. It's this unique energy Scott brings to the script that I don’t think Tarantino would have been able to pull off at that time in his career. 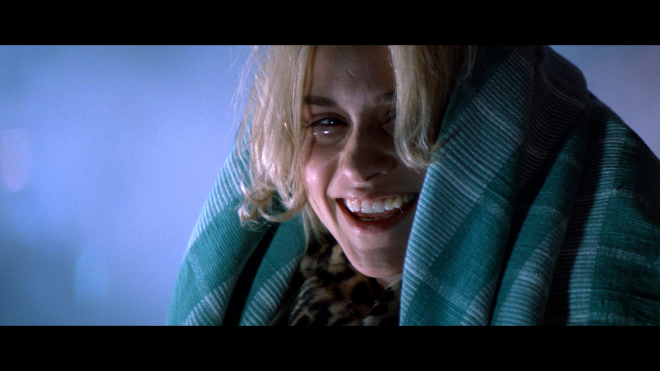 While Scott and Tarantino certainly deserve their accolades, this movie wouldn’t be anything without its cast. Christian Slater delivers one of his best performances with Patricia Arquette matching him scene for scene. Both actors have amazing conflict scenes - Slater against Gary Oldman’s Drexl and Arquette against Gandolfini’s Virgil. They’re intense shocking moments and each actor plays their parts perfectly. From bit parts with Brad Pitt’s Floyd to Saul Rubinek’s Lee, this movie has a huge cast and everyone gets at least one great scene to shine. All of this is wrapped up into a charming hyper-violent love story where you're always rooting for this unlikely pair of star-crossed lovers.

Inside the SteelBook are a reproduction tattoo sticker, a Safari Inn postcard, six reproduction lobby cards, and a mini Coming Home In A Bodybag poster. Inside the slipcase, there’s a double-sided poster with the original theatrical poster on one side and the newly commissioned art on the other. Also included is a 60-page booklet featuring essays, interviews, and info about the transfer. 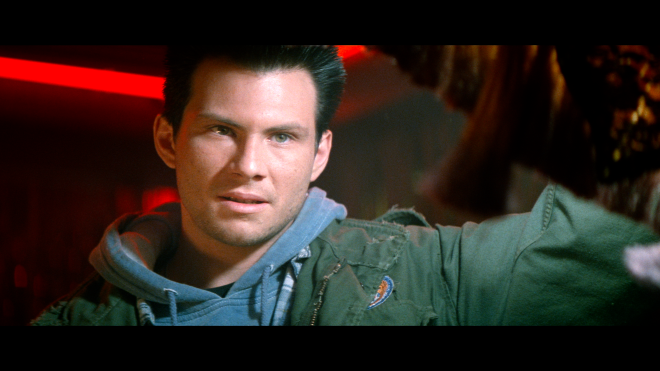 Both the Theatrical Edition and Director’s Cut arrive on the same disc via seamless branching with a 2.39:1 aspect ratio in 2160p with Dolby Vision HDR (HDR10 is of course included). With any Tony Scott movie you have to take the man’s kinetic gritty filmmaking style with the substance. The man loved his film grain and he loved his smokey interiors resulting in a movie that’s probably best described as “beautifully ugly” but true to the film. Over the years I’ve gotten to see film prints screened several times and this is the best I’ve seen this film look.

It maintains a gritty grainy appearance with strong details, bold stylish colors, and deep black levels. Depending on the scene, grain can fluctuate but maintains an organic film-like appearance. Facial features, costuming, Gary Oldman’s makeup, Saul Rubinek’s screening room - fine details all come to life without any signs of edge enhancement or artificial sharpening. No signs of any DNR. 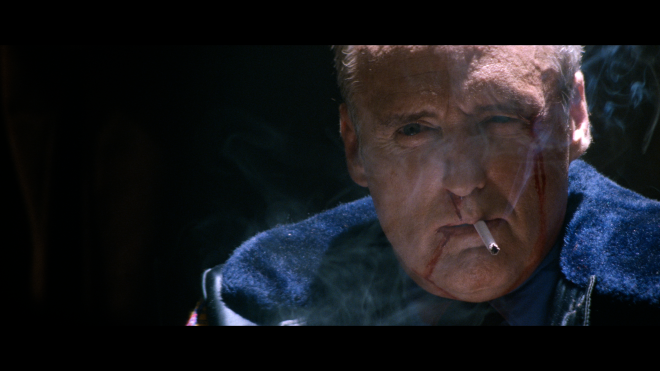 With Dolby Vision HDR, the film’s colors, black levels, and often difficult whites come to life. Skin tones are healthy without looking too pink or pale. Primaries are gorgeous - the soft blue light when Clarence and Alabama spend their first night together really pops. While they gain extra presence, they’re not overblown - everything still looks true to the film released 30 years ago. Black levels are deep and inky giving the film lovely three-dimension depth - for most scenes.

Tony Scott loved to shoot through smoke so there are several scenes in diners or apartments where hazy cigarette smoke permeates the room - these scenes can have a flatter softer appearance. On top of that, bright windows are frequently blown out and bright white; coupled with the smoky interiors and you have a few sequences that don’t quite leap off the screen in full beauty - but more or less that’s all by design. This transfer feels like those hot whites don’t bloom quite so severely or completely wash out the scene in question. All around this is an excellent transfer that stays true to the original film and looks fantastic on 4K. 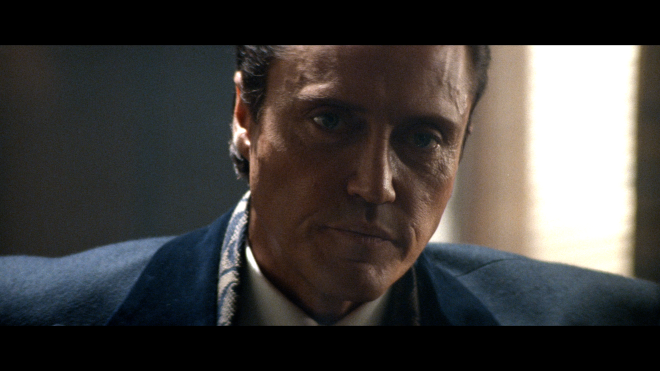 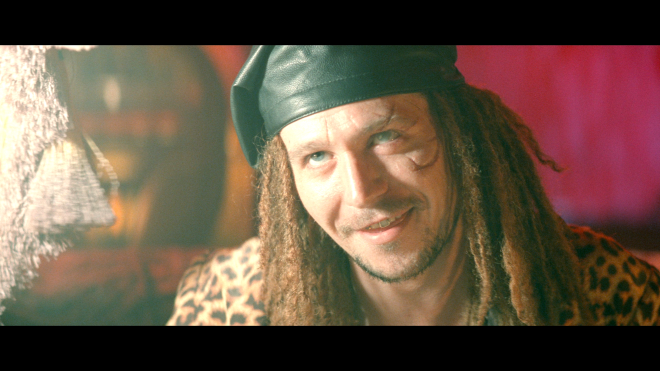 Arrow gives True Romance a pair of audio tracks - a DTS-HD MA 5.1 and DTS-HD MA 2.0. Both are in keeping with the film’s original theatrical release since some theaters were able to show the film with digital surround and they’re both great. It’s actually pretty difficult to pick a winner one over the other. The 5.1 mix sounds more spacious giving some of the sound elements a little more room to breathe where the 2.0 mix is a bit more front-loaded. That’s where I could give a slight edge to the 2.0 mix since some of the sound effects hit with a lot more upfront impact where the 5.1 mix moves it around a bit. Really you can’t go wrong with either mix, it just boils down to what kind of experience you want. For both tracks, the dialogue comes throughout any issue and Hans Zimmer’s excellent score sounds fantastic. 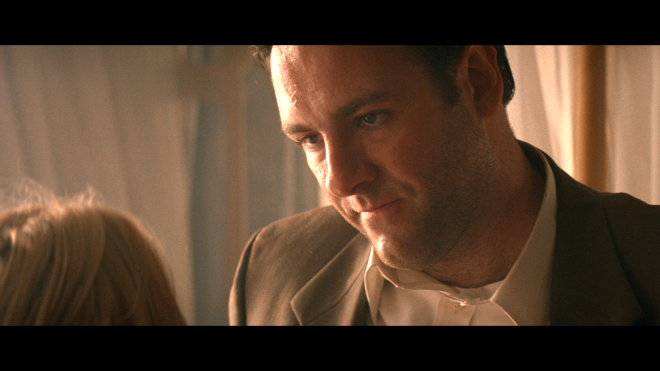 In keeping with all of their special editions, Arrow has packed this set to the gills with new and archival bonus features. You get three original audio commentary tracks of past releases with a new commentary from Tim Lucas that’s a very good listen. After that, we get a host of new interviews, a bunch of deleted scenes, the alternate ending, a bunch of EPK featurettes, trailers, and still galleries to fill up your time. 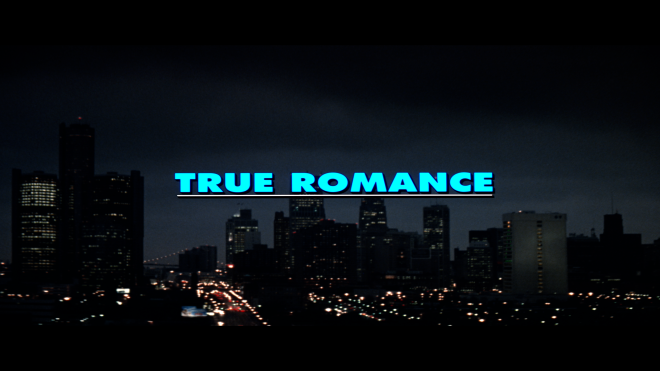 In the near thirty years since its release, it’s bizarre to realize that True Romance wasn’t a hit at the box office. I don’t know anyone who doesn’t like this movie or at the very least appreciate it for what it is - a damn good romance with lots of action, a great score, and an amazing cast of colorful memorable (and quotable) characters.

Arrow Video does right by fans giving True Romance a worthy upgrade to 4K Ultra HD Blu-ray. The newly restored transfer is terrific keeping the film’s gritty aesthetic intact while improving details, colors, and black levels thanks to HDR10 and Dolby Vision. The audio is great, and you have hours of excellent bonus features to pick through. Since there doesn’t appear to be a U.S. release on the horizon whichever release of this you go for, it’s worth importing. Highly Recommended.