In the city that never sleeps, mass killings are on the rise and every single perpetrator utters the terrifying message: God Told Me To. Larry Cohen's terrifying horror thriller about a detective played by Tony Lo Bianco struggling to make sense of the senselessness packs a wallop to this day. Blue Underground continues in their winning streak updating their fan-favorite horror catalog titles to 4K Ultra HD Blu-ray with another great Dolby Vision transfer with excellent audio, and a host of fantastic bonus features to dig through. Very Highly Recommended.

A sniper has just killed over a dozen people perched atop a water tower. A cop opens fire during the St. Patricks Day parade. People killing their entire families. The only thing that connects these killings is the single utterance “God told me to” - and it haunts Detective Peter Nicholas (Tony Lo Bianco). As he digs deeper into the killings, a strange, unlikely, but powerful perpetrator emerges from the shadows and shakes Nicholas’ faith and his sense of self to the very core.

Well, I’m not going to lie the timing to review God Told Me To on 4K Ultra HD Blu-ray was pretty damned terrible. I received this disc not too long after a recent mass shooting and normally I’m able to disassociate what I watch from the world around me, but this time I just couldn’t dive into it. I was grateful I had just gotten in The Bob’s Burgers Movie on Blu-ray so I dove into that instead. A week later and refreshed, I can again dig into what is one of my all-time favorite horror films. 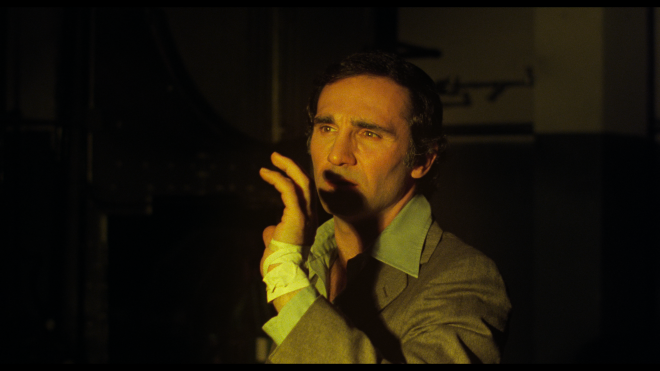 Not being a religious person as I didn’t grow up with a born-into faith, I have come to create my own thoughts and feelings about the otherworldly presence known as “God.” And to that end, the one thing that terrifies me is the idea of a God or Devil having it in for me personally. That’s why The Exorcist is such a scary movie for me. The Devil hates that little girl and it’s not exactly clear if God actually gives a damn or not. That’s why God Told Me To just creeps the hell out of me. It’s the idea of an all-powerful being deciding your fate without your input. Those words from our first killer “God told me to,” sends chills down my spine. This film takes some wild spins into unexpected territory, but that opening conceit sets the tone and even through some interesting plot developments, the film comes together for a real gut-punch of an ending.

While better known for his highly entertaining schlocky b-movie efforts, Larry Cohen brings together a genuinely terrifying film. Shot on location in New York City, the film plays more like a police procedural with one lonely detective obsessively trying to connect the dots to what other people call random or unrelated events. To that end, Tony Lo Bianco carries a lot of water for this film. His fierce energetic performance commands every scene as he digs for the truth no matter what it costs him personally or professionally. 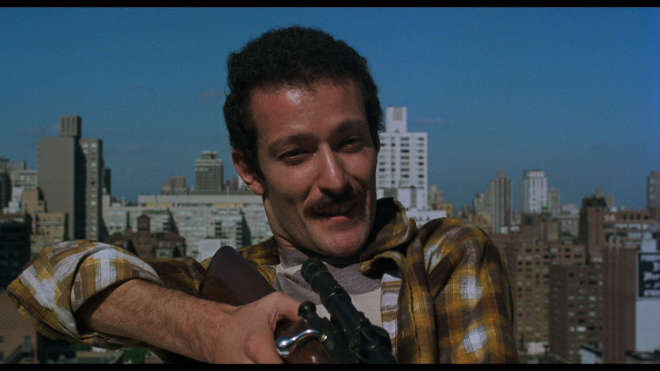 For another take on God Told Me To - check out my colleague M. Duarte’s 2015 Blu-ray Review

Vital Disc Stats: The 4K Ultra HD Blu-ray
Blue Underground returns to their back catalog to resurrect God Told Me To as a 4K Ultra HD Blu-ray set. The 4K version is pressed on a BD-66 disc with the 1080p version scaring up a BD-50. Both discs are housed in a sturdy two-disc case with slipcover and reversible insert art depicting the original cover artwork. Both discs load to animated main menus with standard navigation options. 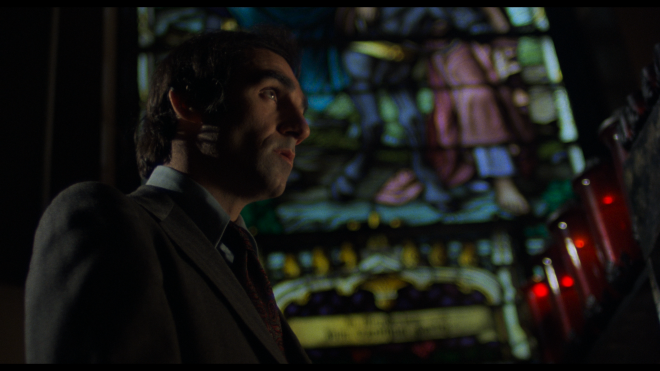 Blue Underground once again shows how to preserve and present a classic catalog title on 4K Ultra HD Blu-ray. God Told Me To simply looks fantastic looking sharper, cleaner, and clearer than ever before without betraying its low-budget origins. From the shocking opening moments to the creepy ending, this new 2160p Dolby Vision (and HDR10) transfer looks magnificent. Facial features, the textures, and patterns of 1970s clothing, and the production design work featured in various locations throughout the film are all on display. Fine film grain is retained without any overt signs of smoothing or management - but it’s not overly noisy or intrusive. The lone dodgy spot happens around a half hour in when Lo Bianco goes into an apartment complex to interview someone and is attacked on a stairway, a key scene on a subway platform is another example - but these scenes have always looked dodgy and this is an improvement so far as you can actually see and understand what’s happening compared to past releases.

Dolby Vision is smartly applied to enhance the film’s color scheme nicely with vastly improved black levels and contrast. The previous 2015 Blu-ray was a fine improvement over past DVD releases but still had its drawbacks and this release fixes those issues while giving a greater sense of three-dimensional image depth. Colors have the appropriate pop and presence with strong primaries and healthy natural skin tones. Blues and Yellows get a lot of play at various times. There are a couple of spots that felt like Blues were pushed a little too hot compared to past releases, but nothing too distracting to get hung up over. Whites are clean and crisp. 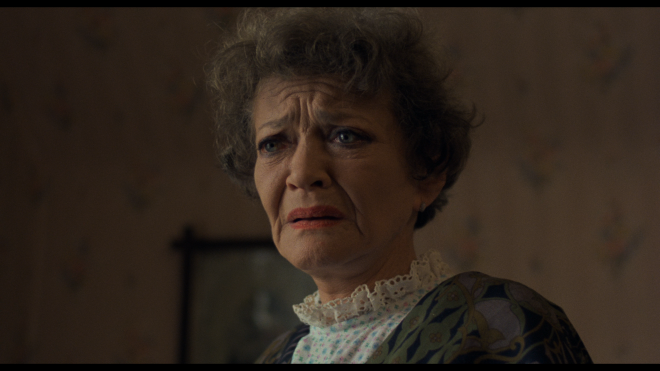 As a whole, I’m very impressed with this release. Blue Underground keeps pushing hard with their catalog titles and the effort shows. “Picture perfect” may not always be possible for titles like this, but they get pretty damn close. Any quibbles or issues are relatively small when compared to the whole. 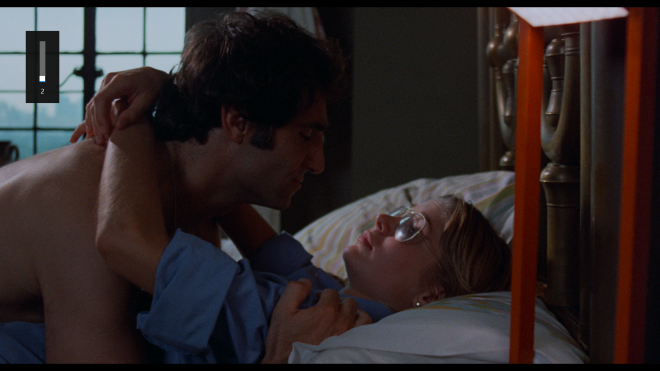 “God said, let there be Atmos and there was Atmos and it was good…”

Keeping to Blue Underground’s tradition, fans are served with a new Dolby Atmos (Dolby Digital 7.1 default), a DTS-HD MA 5.1 track, and a DTS-HD MA Mono mix. Any of these three mixes are perfect listening experiences so it all comes down to preference. Typically for a movie like this, I’d lean towards the mono track since by and large that’s how I’ve always experienced it. However, this new Atmos track is impressive. It feels much more expansive and immersive than before. Those big echoing city streets or the rumble of the subway or the tight corridors of New York apartment buildings all present an interesting soundscape. Overheads don’t offer up a lot of distinct object placement activity beyond some specific sequences but instead are well utilized to help open up the mix. In making the soundscape feel larger, levels and clarity aren’t hurt in any way. Dialog still sticks close and tight and scoring is effective throughout. The 5.1 mix is still very good and if you’re not rocking Atmos in your home, it’s a great option. And again, I still really like the Mono track for how it keeps the soundscape close and tight. You simply can’t go wrong here. 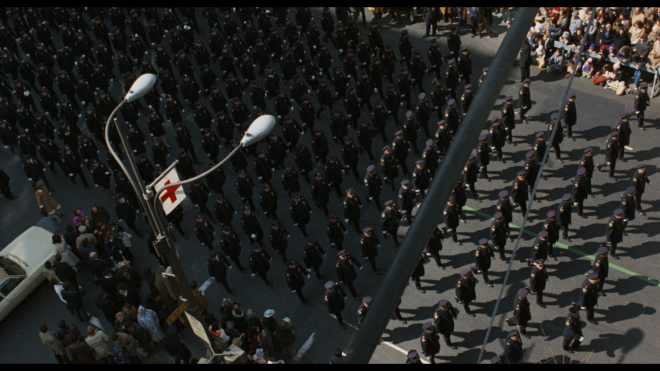 It wouldn’t be a Blue Underground release without at least a few good bonus features - and this set is stacked! We get the previous Audio Commentary with Writer/Director Larry Cohen with William Lustig and it’s a great track if you’ve never heard it. Next, we get a new Audio Commentary with Steve Mitchell and Troy Howarth that is dynamite stuff filled with insights and trivia. After that, we get pretty much the exact same set of featurettes and interviews from the 2015 release, which isn’t bad considering all the great stuff in there. Remember, if you haven’t seen it, it’s still new to you. 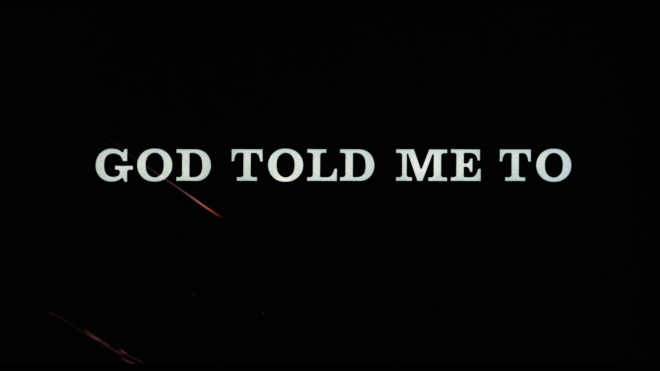 God Told Me To remains a visceral and affecting horror feature nearly fifty years after its theatrical release. Recent events help fuel the horror packed into this film of random violence only explained by a terrifying utterance. With a terrific performance from Tony Lo Bianco and a creative engaging script from writer/director Larry Cohen, this low-budget gem hasn’t lost its punch. Blue Underground delivers another first-rate 4K Ultra HD Blu-ray release sporting an excellent Native 4K Dolby Vision HDR transfer complete with an effective new Atmos mix in addition to legacy audio tracks. Capped off with a terrific assortment of bonus features, this is one hell of a great release. Very Highly Recommended