Dario Argento and Lamberto Bava, son of "Spaghetti Horror" maestro Mario Bava, joined forces to provide gore-hounds everywhere with a perversely twisted spectacle of demonic possession run amok in Demons. With Argento in the producer's chair, Bava is given free rein to splatter the screen with grisly details, a vibrant, colorful palette thanks to cinematographer Gianlorenzo Battaglia and one of the wildest soundtracks. While the disgusting special effects stun and shock audiences to their wits, the fast-paced screeching sounds of the heavy-metal tunes blast through the speakers, creating a tensely energetic and frantic complement to the visuals. Adding a subtle comical atmosphere to the gorefest is Claudio Simonetti's original musical score, particularly the main composition at the beginning, which has to be one of the best and most memorable pieces for a horror movie. The creepy but highly spirited circus-like undertones are bizarrely fun.

Revisiting this childhood favorite for the umpteenth time, I'm amazed the cult Italian horror classic still holds up surprisingly well, overwhelming its audience with a heavy-metal madness that's as comically contagious as it is sensationally over-the-top. Admittedly, the tense, action-packed moments can also seem somewhat corny and screwball, especially when one character rides a dirt bike through the aisles of a theatre while wielding a samurai sword, but they nonetheless remain visually exciting and exhilarating to behold. Meanwhile, Gianlorenzo Battaglia's cinematography works in surprisingly perfect harmony, generating a bonkers movie-going experience that electrifies audiences into cheering the gruesome mayhem. To be clear, I'm referring to the humans and their fight for survival, not the monstrous creatures with glowing eyes, torn fingernails and sharp, mangled teeth. They're ugly, horrifying ghouls! When charging into battle, I have my "ghetto blaster" and a mix-tape at the ready. (Movie Rating: 4/5)

If we're going to be perfectly honest and objective, Demons 2 is all sorts of badness, tenanted by daft characters and many cartoonishly stupid sequences, but I freaking love it! The atrocious acting by the entire cast makes the dialogue all the more ridiculous while certain, roll-your-eyes plot points raise more than an eyebrow. A pregnant woman (Nancy Brilli) suddenly has a sugar craving while all hell breaks loose in her apartment building and loses concern for her husband's (David Edwin Knight) safety. A little boy home alone eventually gives birth to a hideous crossbreed of a gremlin and the Black Lagoon creature, and it spends a good amount of time menacing the defenseless expecting mother. And the scenes with the gym instructor (Bobby Rhodes) and his wimpy soldiers of bodybuilders are laugh-out-loud hilarious, a splendidly genuine highlight in an ocean of bad camp. A bad movie that's nonetheless dearly beloved!

In the first movie, the demonic pandemonium started after a Rick James wannabe scratched her face with a mask, and her transformation corresponded with events in a random horror movie. But here, director Lamberto Bava and producer Dario Argento skip such expositional formalities and simply have a demon break through a TV screen, attacking the annoyingly self-centered and callow Sally (Coralina Cataldi-Tassoni) on her birthday.  Suddenly, doors, phones and elevators don't work throughout the high-rise building — except when convenient to the story, of course. And in spite of all the goofiness and ridiculous moments, the sequel is an enjoyable, gore-tacular campy follow-up, littered with tons of disturbing, shockingly disgusting details that induce just as many laughs as churn stomachs. Full of screams, shrieking panic, demonic bedlam and another fantastic soundtrack for a horror movie, it's the best birthday party ever! (Movie Rating: 3.5/5)

Synapse Films unleashes Dario Argento and Lamberto Bava's Demons & Demons 2 to 4K Ultra HD as a two-disc special limited edition package. A pair of triple-layered UHD100 discs sit comfortably atop each other on the same panel with each containing their respective film and special features. Both discs are housed inside a clear keepcase case with a glossy slipcover and reversible cover art. The package also includes a catalog booklet, a poster from the movie theater, a replica of the movie voucher to Metropol and an invitation card to Sally's birthday party. At startup, each UHD goes straight to the main menu with music, full-motion clips and the usual selection of options along the left. 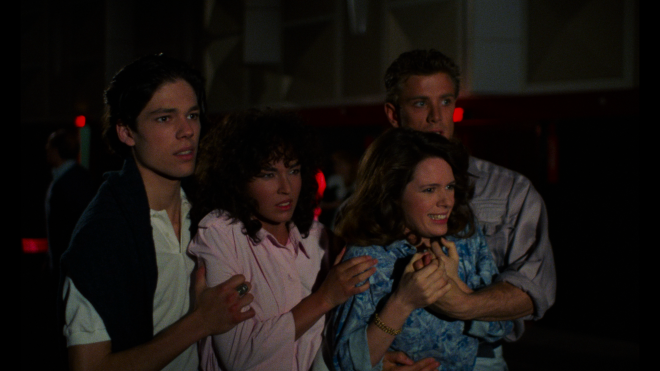 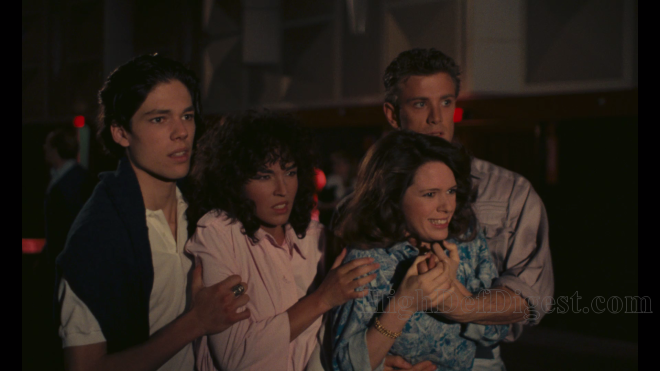 The cult gore favorite wreaks havoc in the Ultra HD theater with a phenomenally gorgeous HEVC H.265 encode that easily dominates and rips the throat of its predecessors. The same 4K scan and restoration of the original 35mm camera negatives enjoyed on the Arrow Films UHD edition are utilized for this release, and three cuts of the film are offered: the full-length original cut in English and Italian and a shorter U.S. version with alternate dubbing and sound effects. In either case, the results are nothing short of mesmerizing and stunning compared to previous releases. The native 4K transfer relishes the improved definition and clarity of the smallest aspects and imperfections of the building while the finer details in the hair, clothing and gruesome make-up effects are significantly sharper and striking. A few soft, poorly-resolved moments can stick out like an oozing sore, but overall, the video is incredibly consistent.

Awash in a thin, fine layer of natural grain, the 1.66:1 image has an attractive film-like quality while bathed in stygian, velvety blacks and inky, midnight shadows that penetrate deep into the screen, providing the grisly mayhem with great dimensionality while maintaining excellent visibility in the darkest corners. The improved boost in contrast also furnishes a stronger balance and brighter picture with clean, spotless whites, and the crisp, radiant specular highlights allow for better perceptibility within the hottest areas while adding a dazzling sheen to various surfaces and the repulsive gory make-up. All the while, the Dolby Vision HDR presentation showers the blood-soaked action in a sumptuous array of colors thanks to the vibrant cinematography lighting every scene in an animated mix of reds, blues, oranges and yellows. Secondary hues are equally richly saturated throughout, and facial complexions appear natural with lifelike textures and a realistic rosy-peach pigmentation in the entire cast. (Dolby Vision HDR Video Rating: 92/100) 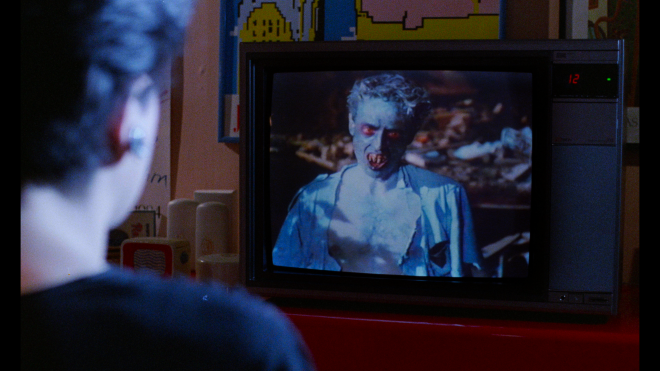 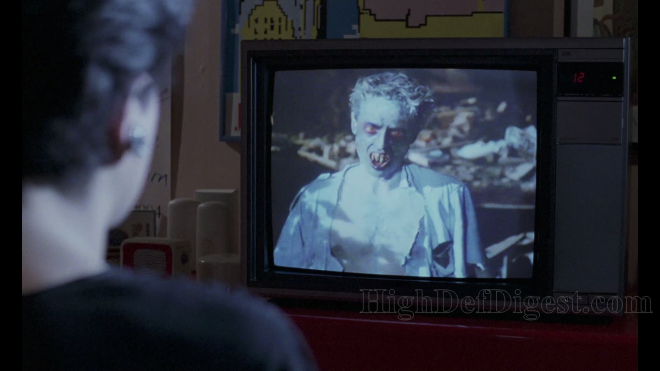 Like the first movie, this UHD edition of the sequel easily towers over its home video predecessors thanks to a new remaster and restoration of the original 35mm camera negatives, the same scan enjoyed on the Arrow package.

Within the first few opening minutes, viewers can see the massive improvements in this HEVC encode, enjoying sharper and better-defined lines in the costumes, the hallways of the building and the various apartments. We can better make out the small objects decorating each space, and the overall grain structure is far more stable and consistent layered, except for a couple minor sequences where it's understandably a bit more pronounced, such as the gym and garages scenes. Unfortunately, one major distraction that plagued previous releases is carried over here, which is a strange stuttering, ghosting-like effect, most prominently happening when Jacob crashes outside the building. This is an inherent anomaly that permanently damaged the elements, caused by a defect in the film stock used at the time. It's obvious, given the overall quality of the 4K transfer, the best was done to repair the damage but is nonetheless distracting.

On a more positive note, the Dolby Vision HDR presentation boasts a bolder, more dynamic array of primaries throughout, showering the violence in animated crimson and garnet reds while bathed in a mix of vivid cobalt blue and warm marigold orange lighting. Likewise, the selection of vibrant, full-bodied secondary hues supply an ironic flamboyance to the gory visuals, like the hot-pink sweaters, the royal purple design of some leotards and the loud buttery yellows of some apartments. Also immediately apparent is the improved, spot-on contrast balance with intensely bright whites and crisp, narrow specular highlights, furnishing the deluge of bloody carnage with a realistic sparkle and glistening glare from the lights. At the same time, the rooms and hallways are bathed in inky rich, velvety blacks and raven, stygian shadows without engulfing the finer details while providing the 1.66:1 image with an impressive depth and cinematic appeal. (Dolby Vision HDR Video Rating: 86/100) 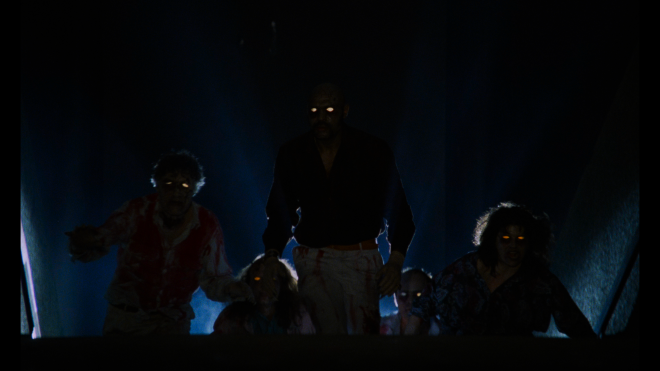 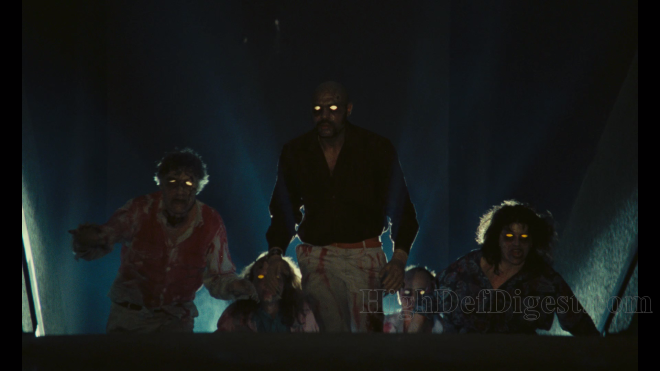 For this 4K package, Synapse also borrows the same English and Italian DTS-HD Master Audio 2.0 and 5.1 soundtracks as the Arrow edition, which were struck from the original 4-channel Dolby Stereo elements. However, they are also joined by a new DTS-HD MA 2.0 monaural track exclusively remastered by Synapse for the U.S. theatrical cut, and in all cases, they are another improvement over previous home video releases. The front-heavy presentation displays crisp, clean dialogue in the center at all times while the other channels display a few minor off-screen activity to broaden the soundstage. Imaging is surprisingly accurate and feels quite spacious, especially as several subtle ambient effects pan into the sides on a few occasions and the music effortlessly bleeds into all the speakers. In all the tracks, the mid-range exhibits outstanding definition and separation, maintaining impressive detailing even during the loudest, ear-splitting segments, and a robust, full-bodied low-end adds depth and weight to the visuals, as well as the many heavy-metal song selections. Whatever the listening choice, all lossless mixes are far richer and more vibrant than in previous editions. (Audio Rating: 84/100) 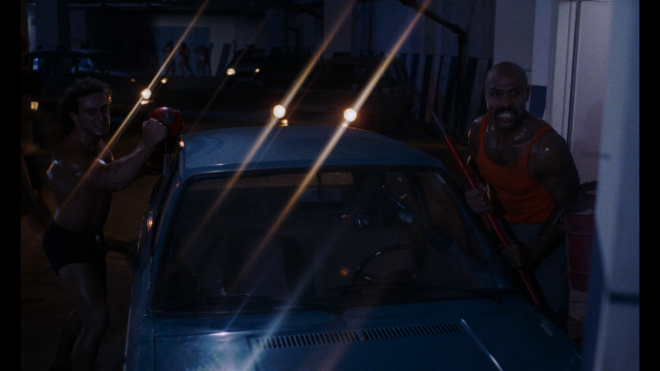 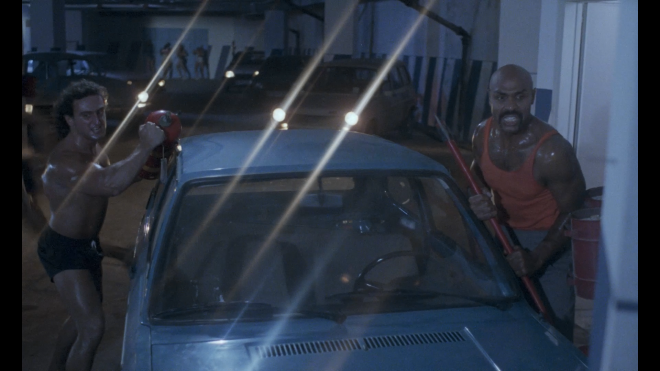 Similarly, the cult sequel moves into home theaters with the same English and Italian DTS-HD Master Audio 2.0 and 5.1 soundtracks enjoyed on the Arrow UHD edition, but Synapse also upchucks an English DTS-HD MA 2.0 Stereo track that was remastered by them, which is quite good.

This new true stereo theatrical mix delivers a more natural and appealing soundstage, feeling fuller and more convincingly spacious as various background activity flawlessly moves between the three channels. Imaging is better focused and stable in the center of the screen, creating a more faithful presentation with an excellent sense of presence while dialogue is crystal clear and precise. The mid-range also exhibits discrete detailing and clarity in the music and in much of the bombastically loud action with the exception being the scenes of the baby demon where its ear-splitting screams can come off somewhat brash and too bright. On the other hand, one could argue that this was the intended effect of the filmmakers, which is a possibility since there is no hint of noise or distortion during those segments. All the while, the low-end is surprisingly hearty and energetic, providing the visuals and song selections with an appreciable weight. (Audio Rating: 78/100) 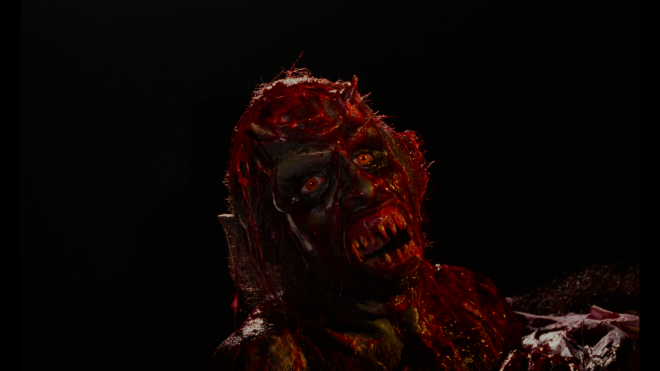 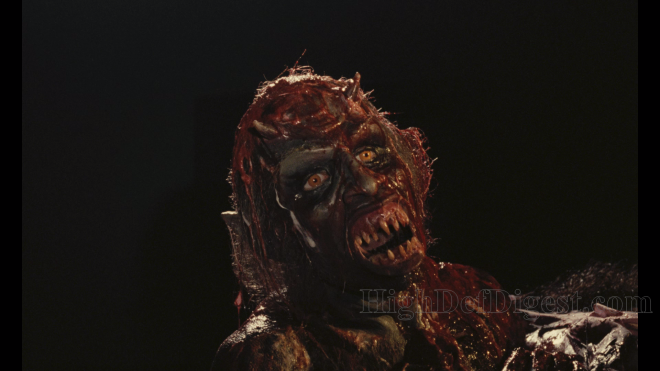 For this UHD edition, Synapse has culled together an impressive collection of supplements that fans will enjoy sifting through for hours, and they are spread across both 4K discs. 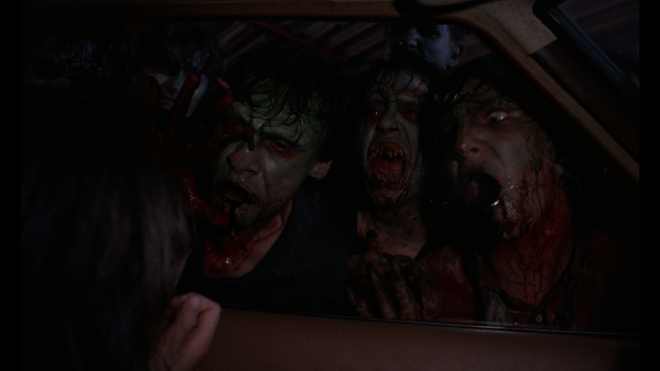 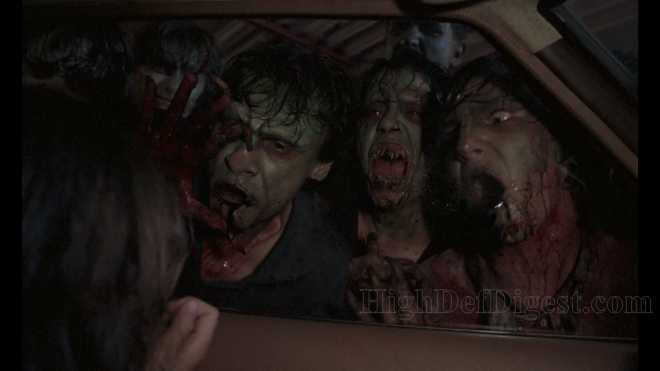 Dario Argento and Lamberto Bava join forces to bring a gruesome, bloody vision of demonic possession run amok inside a movie theater in Demons. Then, they follow it up with another graphically violent spectacle of amazing special effects wizardry in Demons 2, but they set the bedlam inside a high-rise apartment building with children, a pregnant woman and a self-centered party girl. The two movies are mostly memorable for the effects and the wonderful soundtracks, but they can also be equally enjoyed for their goofy campiness and several freakishly nightmare moments. Courtesy of Synapse Films, the cult gorefest favorites invade 4K Ultra HD with surprisingly outstanding Dolby Vision HDR presentations that deliver shocking improvements over their HD SDR counterparts, and they are joined by equally excellent DTS-HD Master Audio soundtracks that fans will love. A wealth of supplemental material makes for a highly recommended UHD package and a great collector's item for cult enthusiasts.