Paul Morrissey’s 1974 classic Blood For Dracula remains a sharp-witted Euro-shocker that finally returns to home video with a beautiful new 4K Ultra HD Blu-ray release from Severin Films. Udo Kier stakes his claim as one of the most unique takes on the Dracula legend with a splendid supporting cast including Arno Jürging, Joe Dallesandro, and the great Vittorio De Sica. The transfer is amazing, the audio is spot on, and there are nearly four hours of bonus features making a set that comes Highly Recommended.

Dracula (Udo Kier) is sick and dying. His beloved sister suffers his fate. As vampires - they must feed on the blood of virgins, anything else is tainted and unpure. Because the supply of virgins has dried up, Dracula’s servant Anton (a delightful Arno Jürging) concocts a plan to travel to Italy - a land full of virgins because of their Catholic faith in order for the vampire to find a “wife.” With the promise of three beautiful virtuous daughters to choose from, Dracula takes up residence with the disgraced II Marchese Di Fiore (Vittorio De Sica). Only the ailing vampire soon learns that the chaste Italian women are not always what they seem.

Without much time for rest and recreation - Paul Morrissey reassembled his main cast of Flesh For Frankenstein (coming soon to 4K and 3-D Blu-ray from Vinegar Syndrom and 3-D Film Archive!) for Blood For Dracula. Maintaining the sharp satirical edge of the previous film, Blood For Dracula is as much a deconstruction of the horror genre as a sendup of the bawdy Euroshocker films of Jess Franco, Tinto Brass, and Joe D’Amato. There's violence and gore and plenty of gratuitous nudity - but everything has a diabolically witty edge.

There’s violence and gore, but it’s played up to a comical bent. There’s an appreciation of the nude form and sexuality, but it’s played so comically overt it’s hardly titillating or tantalizing of the prurient interests. It’s a genuine horror/comedy that sets the tone early with the hilarious shot of Udo Kier’s Dracula being chauffeured around in a huge car… with a coffin and a wheelchair strapped to the roof. Paul Morrissey’s horror stylings and humor only ramp up from there. 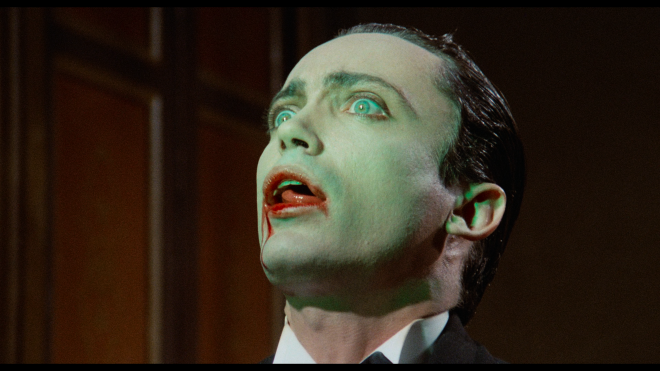 The film kicks things off by knocking the fantasy of virginity and sexual purity. The best way to stop a vampire isn’t the purifying light of the sun, wreaths of garlic, or a stake to the heart - it’s simply having sex. In the whole of Dracula’s homeland, there are no more virgins so they have to travel to Italy because they believe that Catholics are chaste and pure as part of their religion. They apparently don’t know Catholics very well.

Next, we get a delightful knock against the patriarchy with the Di Fiore family in financial ruin and essentially must sell off one of their daughters to survive. I’ve often wondered if it was intentional to make Vittorio De Sica look like a man who is one bolo tie away from becoming Colonel Sanders? Are his daughters mere chickens ready to be slaughtered? On top of that, you get the butch Marxist Mario played by Joe Dallesandro who calls for an end to the aristocratic elite by systematically bedding the Di Fiore family...only his overactive libido may actually help save the establishment! 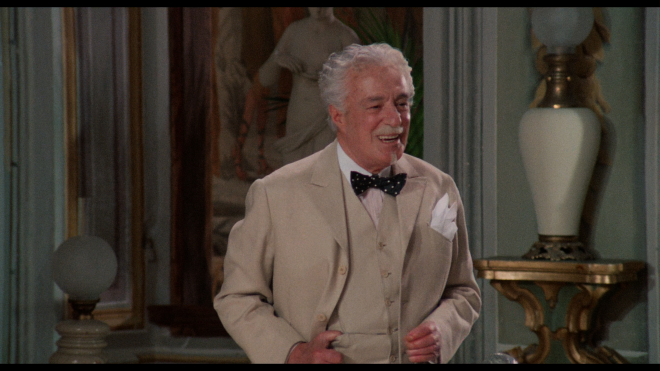 Then we come to the amazing Udo Kier as a Dracula who just can’t catch a break. When we meet the Count, he’s a simple man who just wants to read his books and stuff beautiful birds in peace. Why should a little virgin blood interrupt these little hobbies? He brings an urgent physicality to the role that’s just dynamite stuff - like a drug addict waiting for his next fix of the good stuff. But when he gets impure blood, it’s hilariously tragic!

After Kier, the glue that brings this horror/comedy political satire to life is the great turn from Arno Jürging as Dracula’s servant Anton. His voice, his mannerisms, his facial expressions - he’s dialed up to eleven at all times. He’s such a robust character that you start to wonder why he’s even helping the sickly ailing Count at all? Traditionally familiars want to become vampires with the allure of eternal life, but here, that life looks like eternal hell with frequent periods of intense starvation.

Ultimately Blood For Dracula is a terrifically staged horror/comedy with plenty of gore and viscera on top of sharp wit and some cunning satire. Ever since the Criterion DVD went out of print I've been on the hunt to find a copy I could afford. It’s been the better side of 15 years since I last saw this movie and I've been itching to see it again. I thought it was a fun flick when I was younger but something about getting older made this film even more hilarious and entertaining than ever. At long last, this great flick is again available for fans not wanting to pay hundreds of dollars for a DVD.

Vital Disc Stats: The 4K Ultra HD Blu-ray
Blood For Dracula drinks the virgin blood of 4K Ultra HD Blu-ray thanks to Severin Films in a deluxe three-disc 4K UHD + Blu-ray + Soundtrack CD set. The discs are housed in a three-disc digipak case with a side-sliding slipcover. Also included is a small insert slip with the track list for the Soundtrack CD. The disc loads to an animated main menu with simple navigation options. All of the main bonus features are housed on the 1080p Blu-ray disc. 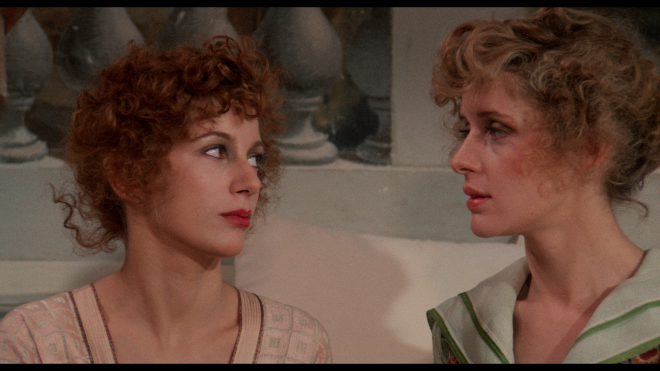 I sadly never got to buy the Criterion Collection DVD narrowly missing my chance when the Hollywood video I worked at closed. So the last time I got eyes on that disc was quite some time ago and my memories of it were more about the film than the A/V quality. With a fresh new scan and restoration, this native 4K HDR10 transfer is simply gorgeous. From the opening shot of Udo Kier’s Dracula doing himself up to look more human right through the big bloody climax, this image is often stunning.

Lifelike facial features, costuming, and impressive production design details are all major highlights of this release. Film grain is stable and organic appearing only ever looking a bit noisy in a few dark sequences. The tavern scene with the Roman Polanski cameo is a standout where grain is a bit thicker than normal and black levels are much darker approaching crush as Anton’s dark costuming causes him to become a floating head against the dark background. But that is the only bumpy spot. 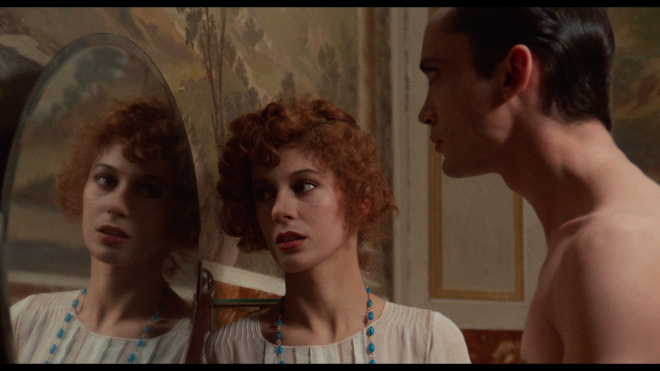 HDR10 does what it’s supposed to here highlighting and bringing more life to colors while allowing for more stable contrast and black levels. The white virginal dresses the daughters wear are luminous without appearing too hot or any blooming. Likewise, black levels are deep and inky and combined give this image a terrific sense of three-dimensional depth with only a scant few shots closing on crush. Colors are vivid with terrific blues, sweet yellows, and some lovely deep crimson reds. Flesh tones are natural and healthy - you have plenty of time to admire skin in this film!

The film elements are in amazing shape without any sign of dirt, speckling, scratches, or any other age-related anomalies. This film always deserved a great release and now we have one! This is genuinely amazing work top to bottom for a film that’s over 45 years old and didn’t have the backing of major studios. I hope Severin keeps finding some obscure horror delights for their 4K titles, they’re on a roll. 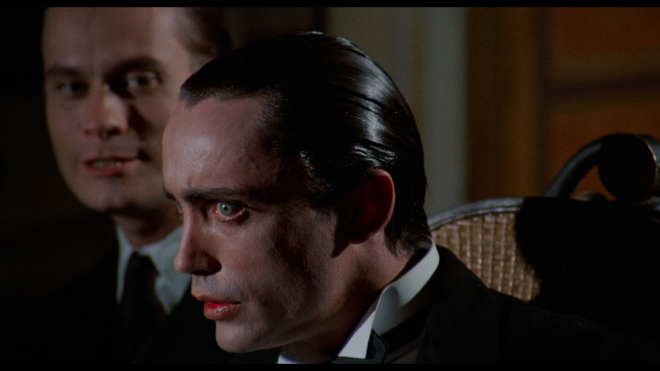 Blood For Dracula arrives with an impressive and natural sounding DTS-HD MA 2.0 mono mix. This isn’t a film that calls for much of an action-packed surround mix of any kind. The vast majority of scenes are located in small rooms featuring only two or three actors. When the film moves to the tavern and there are a couple more folks milling about, the mix is nice and lively. Likewise, when the three daughters are working in the garden, there are enough ambient background effects to fill in some atmospherics to the soundscape. Using the DTS Neural:X function scales things nicely, giving some more space to the elements, but it’s not necessary. Dialog is clean and clear throughout without issues. No hiss or age-related issues to report and the Claudio Gizzi score sounds terrific throughout. 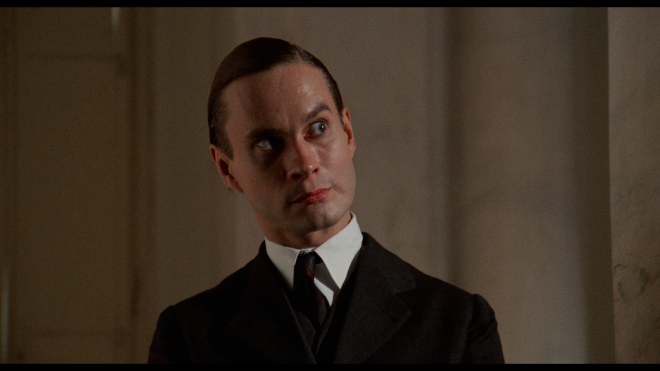 There are a bunch of great bonus features to pick through here. While I would have loved an audio commentary - we get hours of great interviews including Paul Morrissey, Udo Kier, Joe Dallesandro, and composer Claudio Gizzi among many others. On top of that we get a soundtrack CD featuring Claudio Gizzi's excellent score. 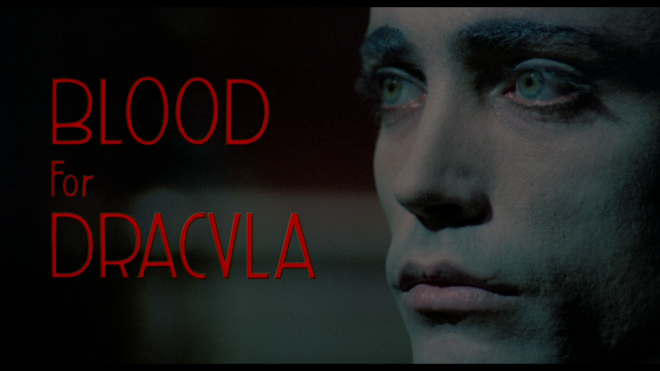 Blood For Dracula is a weird and wild wickedly entertaining horror-comedy. Dracula is cast closer to a feeble drug addict than a vicious creature of the night. While sticking true to its horror roots, director Paul Morrissey and his talented cast find a way to fill each scene with some clever dark comedy and political satire. Absent on home video in an affordable format for years - Severin Films gives fans a great reason to revisit this classic with an excellent 4K Ultra HD Blu-ray release. The new 4K transfer with HDR10 is beautiful, the audio is excellent, and the bonus features are extensive and well worth going through. Now’s the perfect time to add this one to the collection - Highly Recommended