Rob Reiner's The Princess Bride remains a classic fairy tale yarn about true love with a charming mixture of swashbuckling adventure, endearing romance, meta-storytelling and witty humor. Offering a welcomed improvement over previous home video releases, this Ultra HD edition imported from Germany charms fans with a gorgeous, demo-worthy 4K video, a quartet of German and English DTS-HD tracks but the same assortment of supplements as before. All in all, the overall UHD package is very much worth the price to import and makes for a Highly Recommended addition to the library.

It never ceases to amaze how a fresh batch of young students immediately know the reference when Inigo Montoya's phrase to the six-fingered Count Rugen (Christopher Guest) is uttered in class. "Hello. My name is Inigo Montoya. You killed my father. Prepare to die." Those words are then usually followed by resounding cheers, wide-eyed faces and screams about how The Princess Bride is one of their favorite movies. One or two more voices also chime in with wanting to watch it instead of a lecture.

But sadly, that's not meant to be because the aim is simply to point out the instantaneous communal possibilities of storytelling. It is in realizing and appreciating the deceptively powerful magic lurking behind every good story, casting a spell upon the listener or reader and whisking them away to far-away, imaginary lands. The magic is in the ability to enchant an entire crowd as one, to make them cry, laugh or be terrified as a community. The shared experience can potentially create bonds along with a sense of familiarity with complete strangers while simultaneously transcending borders and generational gaps, much like that of the narrating grandpa (Peter Falk) and his grandson (Fred Savage).

At this point, someone in the class will yell out, "Inconceivable!"

After the laughs and giggles die down, the discussion continues about the true genius of Rob Reiner's cult comedy classic lying in how it perfectly captures that magic and demonstrates its power with splendid charm. At once, the fairy-tale romance of Westley (Cary Elwes) rescuing Buttercup (Robin Wright) from marrying the foul, conniving Prince Humperdinck (Chris Sarandon) absorbs audiences into believing the kingdom of Florin. Meanwhile, the swashbuckling adventure with pirates and the trio of lovable rogues — Vizzini (Wallace Shawn), Fezzik (André the Giant) and Inigo Montoya (Mandy Patinkin) — satisfies our innate hunger for both exciting action and jovial laughter. The right ingredients for a memorable tale are there, especially the comedy, but the romance adventure is not really the heart of the plot.

The Princess Bride is ultimately a story about a grandfather bonding with his grandson while also passing down an endearing childhood story to the next generation, much in the same way the students' parents shared this childhood favorite, unwittingly assuring that they will pass it on to their children. In doing so, they also made it possible to share a momentary bond with a classroom full of strangers, including a stuffy, old-fart professor who won't let them watch the movie in class but nonetheless, wishes them well as they leave: "Have fun storming the castle!"

For a more in-depth take on the film, check out our review of the 2018 Criterion Collection Blu-ray HERE.

Imported from Germany, Turbine Media Group brings Rob Reiner's The Princess Bride to a 4K Ultra HD Blu-ray as a two-disc combo pack, which is being reviewed here. There is also a deluxe three-disc Mediabook package with more bonus features. The dual-layered UHD66 disc sits comfortably opposite a Region B locked, BD50 disc. Both are housed inside a black, eco-elite keepcase with reversible cover art. At startup, viewers are taken to a screen with full-motion clips, the usual options along the bottom and music playing in the background. 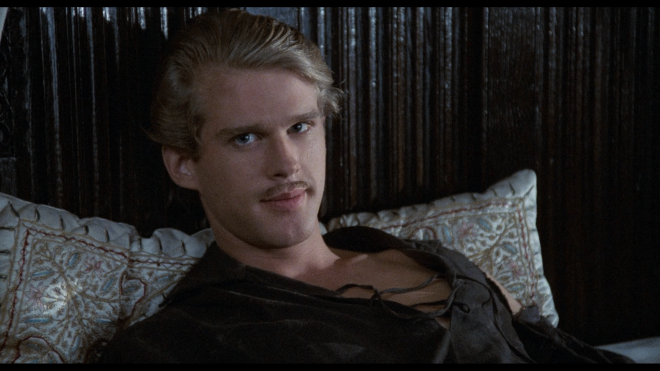 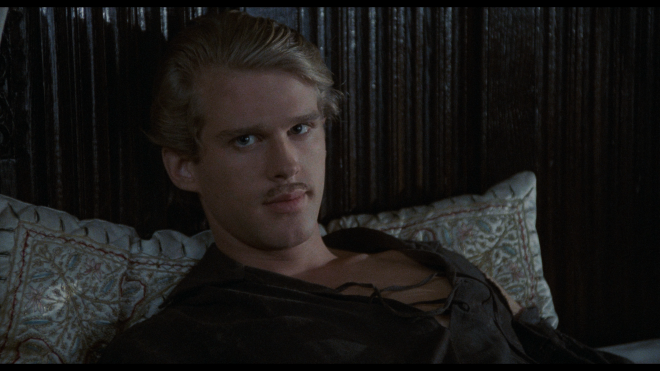 The fantasy adventure saves the Ultra HD kingdom with a stunningly gorgeous, demo-worthy HEVC H.265 encode, boasting a picture that surprisingly exceeds the Criterion Collection Blu-ray from 2018. Reportedly struck from a new restoration and remaster of the original 35mm camera negatives, the native 4K transfer shows sharper, cleaner lines in the stone architecture of the castle and the wood-plaster homes of villagers. The individual leaves of trees and blades of grass are always distinct, even in the extreme wide shots, and every crack, crevice and pockmark in the rock formations are discrete and easy to make out. The stitching in the many elaborate costumes can be better appreciated and admired as they are highly detailed at all times with the embroidery of outfits looking quite striking.

The better and more appreciable aspects are without a doubt the improved wider color gamut, extending the life of this beloved favorite with a fresher, rejuvenated vitality that's often mesmerizing. Once in the kingdom of Florin, the Dolby Vision HDR presentation supplies the fictional realm with invigorating emerald greens in the grass and a more vigorous pine shade in the leaves of trees. All the while, Vizzini's outfit is a vigorous mix of vibrant shamrock beneath the embroidery and a darker velvety juniper in the sleeves. The blue skies are a lush, realistic cerulean, and the red of Buttercup's dress during her kidnapping is an eye-catching, animated candy rose. The softer secondary hues also display an impressive range of yellows and oranges, from the gold of the crowns and the deep, butterscotch of the sunshine to the mix of the autumn leaves everywhere and the fiery flames of the torches and candles. At the same time, facial complexions appear rosier, healthier and more lifelike than ever before.

The 4K video continues to impress and look its best with improved contrast and brightness balance, showering the fairy-tale visuals with beaming, squeaky-clean whites throughout the movie's entire runtime. Specular highlights supply a vivid, lustrous brilliance to the sun's rays bouncing off the water, a glistening realism to various metallic objects and an intense dazzling twinkle to the wide assortment of jewelry. Most impressive is the crisp, narrow glow in the hottest spots, amazingly removing the slight blooming seen in previous versions, allowing for better clarity of the finer details while also adding a beautiful looking-through-the-window effect in some scenes. Awash in a fine layer of natural grain from start to finish, the 1.85:1 image has a lovely film-like quality to it, bathed in rich, opulent blacks and inky, midnight shadows that maintain superb visibility within the darkest, murkiest corners.

It is worth noting that this UHD edition also features the HDR10+ metadata for those with the capabilities. (Dolby Vision HDR Video Rating: 96/100) 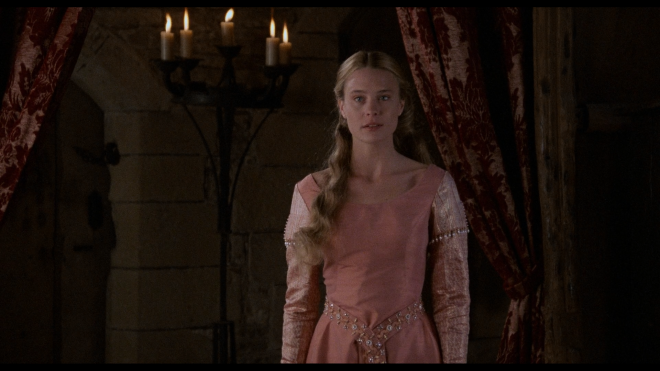 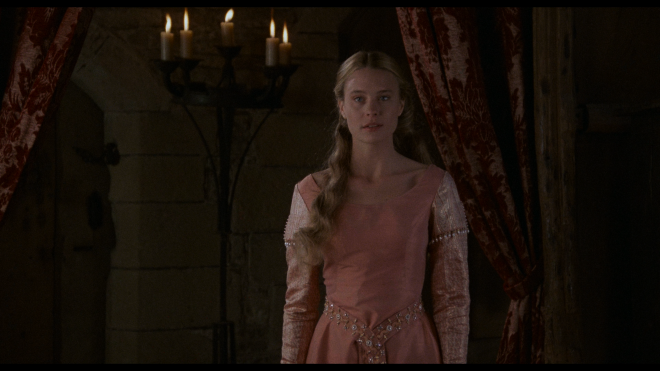 As mentioned in our coverage of The Criterion Collection Blu-ray, the cult comedy classic swings into action with an English DTS-HD Master Audio 5.1 soundtrack that, for all intents and purposes, is identical to previous audio versions. Only here, Turbine Media Group adds a selection of three more lossless tracks to choose from, starting with a second DTS-HD MA 5.1  design in German and a pair of 2.0 stereo alternatives in both English and German. Of the four, the 5.1 surround option is impressive with crisp, precise dialogue delivering the many memorable lines with excellent clarity and accuracy. The mid-range may not be particularly extensive, but it nonetheless exhibits strong acoustical details and distinction in the action sequences while supplying Mark Knopfler's score with warmth and excellent fidelity. Likewise, the low-end doesn't stand out in any memorable way, but it delivers the appropriate weight and heft for providing the visuals with an appreciable presence. A few ambient effects in some scenes bleed into the surrounds, which nicely expand the soundfield. But overall, this remains a front-heavy presentation with plenty of atmospherics spread across the fronts to generate a broad and welcoming soundstage sure to whisk fans away to the movie's fairy-tale land. (Audio Rating: 78/100) 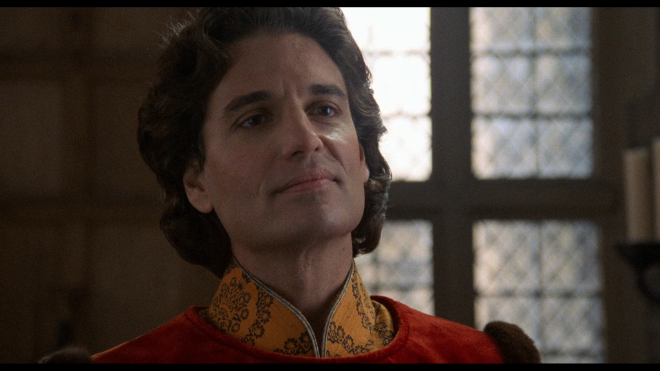 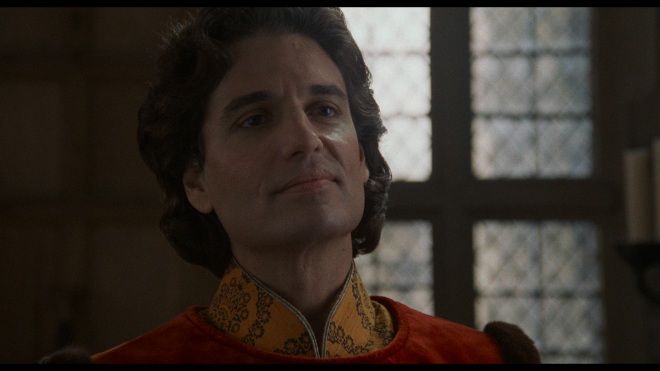 While the UHD disc contains a trio of Trailers (HD), all the bonus material can be found on the accompanying Blu-ray disc, porting over the same set of supplements the 25th Anniversary release, except one featurette focusing on the music and sound effects. 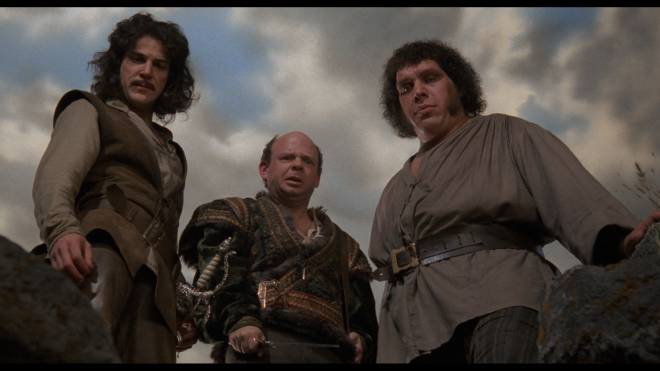 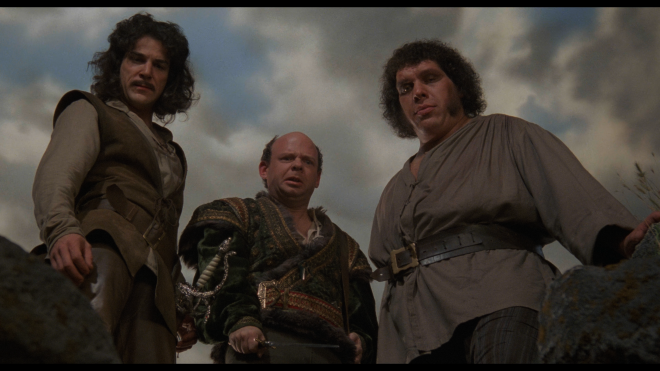 As Steven Cohen wrote in his review of The Criterion Collection Blu-ray:

"The Princess Bride is a simple yarn about true love — one that rises toward classic status thanks to witty dialogue, intelligent scripting, passionate direction, and unforgettable characters. The film continues to work for all ages and plays just as fresh today as it did when it was first released over thirty years ago."

Imported from Germany, Turbine Media Group brings the cult comedy classic to 4K Ultra HD with an enchanting, demo-worthy Dolby Vision HDR video and an excellent pair of DTS-HD Master Audio 5.1 soundtracks in English and German. With a great selection of supplements to keep fans busy, this UHD edition offers the best presentation the film has ever looked on any home video format and makes for a highly recommended addition to the UHD library.