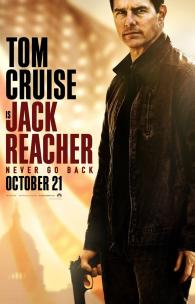 Own Jack Reacher and Jack Reacher: Never Go Back in 4K UHD in this two film collection. JACK REACHER: Ex-military investigator Jack Reacher (Tom Cruise) leaps off the pages of Lee Child’s bestselling novel and onto the big screen in this explosive thriller. When an unspeakable crime is committed, all evidence points to the suspect in custody who offers up a single note in defense: “Get Jack Reacher!” JACK REACHER:NEVER GO BACK: Jack Reacher (Tom Cruise) returns to enforce his bold brand of justice in “a fun action-packed ride” (Peter Travers, Rolling Stone) based on author Lee Child’s best-selling series. When Army Major Susan Turner (Cobie Smulders) is framed for treason, Reacher discovers she’s the target of a massive government conspiracy. With help from Turner and a mysterious new ally, Reacher risks everything to take down the powerful organization that will stop at nothing to protect its secrets.