Cristopher Caldwell and Zeek Earl find themselves populating the rich sci-fi genre with a new gem - Prospect. Starring Sophie Thatcher, Pedro Pascal, and Jay Duplass, this is a terrific example of “lived-in” practical Science Fiction that plays tighter to the Western genre with excellent performances. Thanks to Gunpowder & Sky this film scores a beautiful native 4K HDR10 presentation, excellent audio, and a terrific assortment of bonus features to match. Highly Recommended.

Cee (Sophie Thatcher) has been shanghaied into following her father (Jay Duplass) into the farthest reaches of space aboard a large transport rig. Below them is a forested moon with a poisonous atmosphere but untold riches waiting to be extracted. Contracted to extract gems from the largest known deposit the two descend to the planet below with a limited window to return to the transport ship. With the clock ticking, their best-laid plans are endangered by rival prospectors, mercenaries, and the natural dangers of the moon itself.

One of the things that I can hate about the science fiction genre is the temptation by storytellers and filmmakers to overthink and overcomplicate their stories. Few are capable of immersively detailed storytelling like Brian Herbert or Robert Heinline and execute it without bogging down plot or character. Sometimes simplicity and trusting the intelligence of your audience work best. That’s the welcome approach filmmakers Caldwell and Earl bring to Prospect.

Mixed with the structure of a classic-style western, we’re quickly introduced to this cinematic universe, its characters, their simple motives, and it moves on. Prospect has the look and feel of a “lived-in” universe. Whatever year this story takes place, intergalactic space travel and colonization is old hat. The freighter orbiting the moon, the landing pod Cee and her father fly looks beat up but practical. Their environment suits look well-worn but in ways that visually make sense. Nothing is “new and shiny” or overly complicated. It’s subtle world-building but this attention to design detail really helps sell this movie. 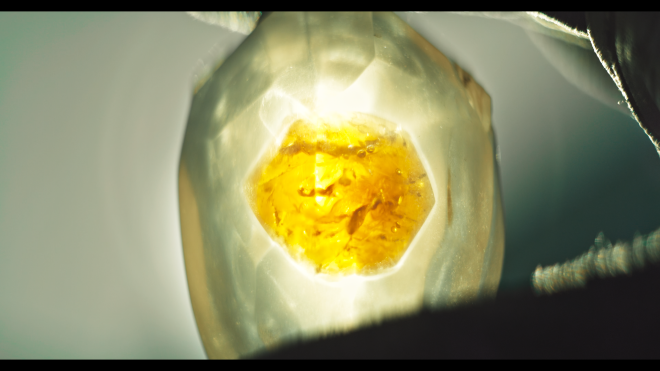 I also love that in another era Prospect could have been a western. A father and his daughter take a lucrative mining job to change their fortunes but the plan goes sideways. Instead of a landing pod, they’d be arriving in a covered wagon. Instead of a gang of mercenaries, it could have been a group of deserted soldiers. Instead of rare gems, it could be gold deposits that men are ready and willing to kill for. And while this plot can feel familiar under those archetypes, the film presents these moments with a fresh eye.

Central to the film is Sophie Thatcher as Cee - in what was apparently her first film. You wouldn’t know it when watching her confidence in the role. Cee is s a young woman having to constantly think on her toes. She carries a lot of weight in the film with edges of a coming-of-age storyline woven into this space western. Pedro Pascal always delivers solid performances and this is no exception. What I loved about him is he’s a galaxy-weary hardened man who has seen a lot of bad in the universe. There are some great bits where it plays like he’s trying to convince himself there’s no good left in him but his actions say otherwise.

Shot on a relatively small budget in the deep forests of Washington, Prospect is a visually arresting film. If you’re not paying attention to the weapons and tools of the characters or their costumes, you’re watching the scenery. The forest may be toxic, but it’s a beautiful location that’s used well. It gives you a reason to believe humans would want to go there beyond the spoils it has to offer.

I love richly creative science fiction that works and Prospect was a great watch. It was a joy when I first caught the film and I’m glad to finally have this one on 4K in my collection. Caldwell and Earl don’t spoil the show by over-indulging their visuals - but they don’t shortchange the aesthetic either. They don’t waste time explaining what is and isn’t possible, but they also don’t shirk the responsibility of setting the rules of this universe. Characters aren’t overcomplicated but they’re not simple cardboard stand-ins either. The world of this story is small and intimate but the universe is vast and full of potential. I hope Caldwell and Earl have more projects on the way because I’m ready to see more from them. I’d be more than happy to watch Cee on another adventure.

Vital Disc Stats: The 4K Ultra HD Blu-ray
Prospect arrives on 4K Ultra HD Blu-ray thanks to Vinegar Syndrome in a two-disc 4K UHD + Blu-ray set. The limited edition release through their website comes with a slipcover, hard stock book slipcover, and collector cards. The disc loads to an animated main menu with traditional navigation options. The bulk of the bonus features are found on the 1080p Blu-ray disc. 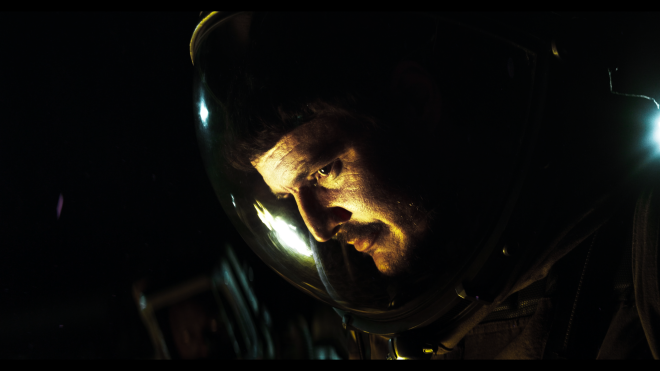 My first outing with Prospect was a digital rental because at the time the only way you could buy the film was through a MOD disc that was a bit expensive for a blind buy. Not an ideal first experience but it keyed me into trying to find the German 4K UHD import disc. Just when I was about to pull the trigger on that release when Vinegar Syndrome announced this release from Gunpowder & Sky. To that end - I have no basis of comparison with past Blu-ray releases or the German 4K UHD import disc. Based on my digital rental experience and recent Netflix viewing - this HDR10 transfer from Vinegar Syndrom is a night and day improvement.

Shot digitally with a 4K digital intermediate, this transfer is simply gorgeous. The streaming version loses all nuance in lighting design with the rich orange-amber hues of the forest. This is a very brown-toned film so colors favor the deep heavy earth tones with lush dark greens and deep crimson reds and navy blues. The colors of the 1080p disc and streaming are muted with a hazy feel and grayish black levels. This image also enjoys a stronger sense of image depth.

Detail levels are impressive throughout allowing you to fully appreciate the visual spectacle of the practical sets, tools, costumes alongside the judicial well-rendered CGI effects. Again this film has the look of a lived-in universe and the details are never wasted. Especially in the spacesuits and costumes, I loved being able to clearly see little details like patches on the suits or nicks and scratches in the glass of their helmets.

HDR10 really lends itself to the spectral highlights. Bold bright switch lights in the space ships or early when Cee and her father on the main ship - it just sparkles. Black levels are deep and wonderful. Much of the film has the look of that twilight magic hour with deep yellow sunlight poking through the trees but still offers excellent shadow variance. The climax of the film is almost pitch black with small helmet lamps for lighting and it looks terrific - and terrifying! 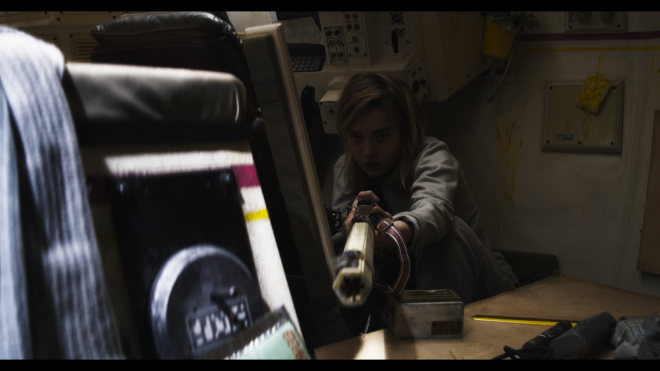 With a DTS-HD MA 5.1 audio mix, this disc offers a nicely immersive presentation. This isn’t Star Wars, there aren’t space ships zipping all over the place or loud concussive thrusters. Given the location, this film sounds very much like going for a walk in the woods. It’s very quiet but there’s plenty of atmospheric effects to give a constant sense of space and dimension. One of my favorite sequences early on is when Cee and her father are landing on the planet. The sound design focuses on what the experience would be like in that small cramped room and it’s really cool! Throughout surrounds are always employed. It may not be the most dynamic track, but it works beautifully. Clean dialog, levels are spot on. 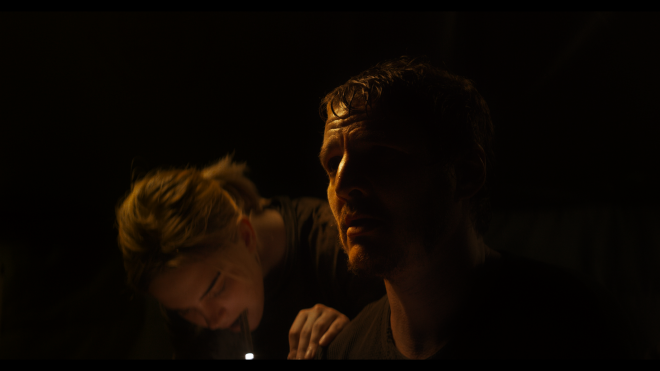 The bulk of the bonus features for this film are found on the 1080p Blu-ray disc - and there’s a lot of great material to pick through. Gunpowder & Sky didn’t waste anything giving this release some worthwhile materials. Each segment may not be lengthy but they’re thorough. The audio commentary with Caldwell and Earl is a great listen as they detail the production, the origin of the project, shooting the film - it’s a great listen. 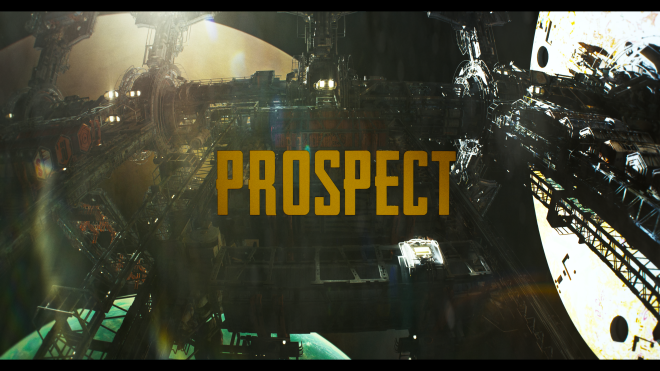 Prospect is the best sort of independent science fiction in my book. A simple and smartly told story with well-rounded characters occupying a concise and believable universe. Walking away from Prospect, it made me want to see what filmmakers like Caldwell and Earl could do with something like Alien or even a Star Wars spinoff project of some kind. Their attention to detail and smart story and character execution could do wonders for bloated franchises.

Gunpowder & Sky digs up a beautiful release of Prospect on 4K Ultra HD. The native 4K HDR10 transfer is impeccable near reference-quality material. The sound design may be simple but it’s immersive and effective. The fine assortment of bonus features will keep you occupied for a few hours digging through some interesting and informative tidbits. In a case like this, I would normally suggest you maybe rent to see if you love the movie first before buying, but this is such a great movie I’m confident if you’re someone who loves smartly written and executed sci-fi - large or small scale - you’ll have a great time with Prospect. Highly Recommended.