UPDATE 2/15/22 -
We've updated the audio portion of our review after receiving the corrected 4K Ultra HD Blu-ray disc with proper 5.1 audio. In case you get a copy with the wrong audio mix, here is the link for the disc replacement program: https://www.kinolorber.com/hard-target-4k-disc-replacement

A mysterious man by the name of Fouchon (Lance Henriksen) runs an underground multi-million dollar organization of elitists who pay top dollar to hunt the most dangerous game - Man. With a police force on strike and rampant poverty, they’ve set up shop in New Orleans promising disenfranchised homeless veterans $10,000 if they can make it five miles through the city. When the daughter of one of their recent targets (Yancy Butler) comes searching for her missing father, Fouchon and his dogs face their hardest target yet - the helpful and lethal former marine Chance Boudreaux (Jean-Claude Van Damme).

Every action star has a peak film; that mega-blockbuster that defines their time on the silver screen. Some get multiple peaks in a long career like Harrison Ford or Bruce Willis or Sylvester Stallone. Some only get one genuine peak film like Steven Seagal with Under Siege before they fade into the sad wasteland of direct-to-video churn and burn crap. From the late 80s into the mid-90s, it was difficult to go a full year without another Jean-Claude Gosh Darn movie. While it could be argued that 1994’s Time Cop was his last great movie, his pinnacle action star best is 1993’s Hard Target. 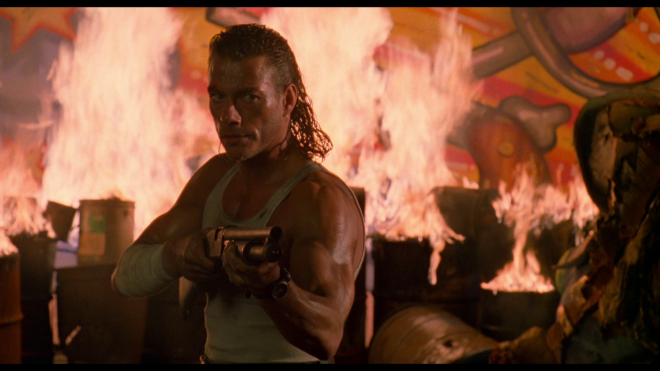 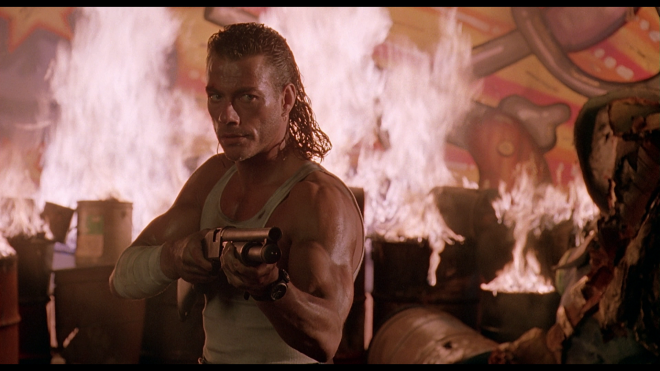 Normally I wouldn’t do this, but this is where I feel the need to justify my high rating of this film a wee bit. While the story is pretty basic routine action movie material, it’s how well it’s made and how the elements are pulled together that makes it great. This is Jean-Claude at his best. After a string of back-to-back-to-back successes earning higher and higher box office revenue and more favorable critical responses, he was in his element (hair notwithstanding). He’s doing impressive stunts, he’s quipping, he’s leaning into the action star leading man role with ease. He's a true star. On top of Van Damme’s established action chops, we have the first English-language Hollywood debut from action maestro John Woo.

Now, John Woo had made numerous better movies in Hong Kong before Hard Target - but this is the movie that made him a household name in the US. You get the double handgun blast-away shoot-outs with the hero in full God Mode. You get the classic guns drawn point-blank standoff. You even get the slow-mo pigeons! And true to form as a film fan, he even repays Tarantino’s use of his signature standoff in Reservoir Dogs by cutting off the ear of one of Fouchon’s lackeys. 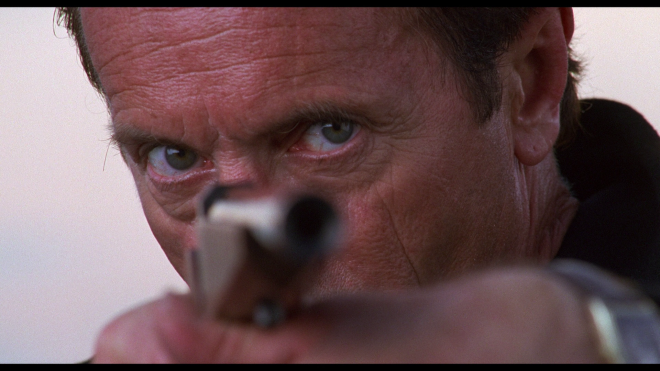 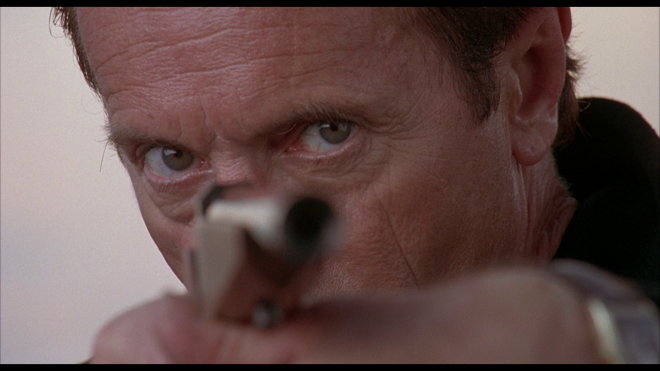 With the blend of balletic martial arts action, overly dramatic slow motion, and a parade of practical effects stuntwork, Hard Target delivers from start to finish. There’s never a dull moment. It’s also the first Van Damme movie I saw in theaters so I have fond memories of a giant bag of popcorn, a box of Milk Duds, and watching this awesome movie play out in front of my 11-year-old eyes. It’s one of the few times I can remember where I didn’t touch my snacks during the movie, I was just sitting there with my elbows on my knees in awe of what was happening on screen.

Part of the fun of this movie is just how evil our villains are. Lance Henriksen is great in everything he does and his Fouchon is next-level diabolical - and hilarious. He’s a man who clearly loves what he does and takes that “work” seriously, but at the same time has the utmost contempt for his clients willfully killing them if and when necessary. When they need to start hunting Boudreaux, instead of just letting loose his lethal right-hand man Pik (the always awesome Arnold Vosloo), he instead gives select former clients the chance to pay him an exorbitant fee for the opportunity to kill the uber-mulleted Van Damme knowing full well most are likely to die. He's evil and also a bit of a grifter. Our hero and villain share very little screentime together but it’s a classic dynamic both actors play well.

Rounding out the supporting cast - I’ve always been surprised that Yancy Butler never really hit it big. Attractive and talented, she enjoyed parts in other action movies before headlining the underrated Witchblade series - but she’s never really had that huge star-making movie role. After The Silence of the Lambs and Candyman, Kasi Lemmons completes her notable supporting role trilogy as a cynical but determined detective. She doesn’t get a lot to do, but she holds her own. And before they slapped a CGI rubber mouth on him, Arnold Vosloo was a genuine baddie in this film.

Then we come to the most colorfully fun character of the movie - Uncle Douvee played by the late great Wilford Brimley. “Sip, but don’t spill. Kill the grass.” became a running joke with me and my Dad for years. I would have loved to have been a fly in the room for that casting decision. “Who do we get to play Van Damme’s cajun uncle?” “Hmmm… the diabetic Quaker Oats guy?” “Brilliant!”

So yeah, maybe Hard Target doesn’t actually deserve the full five-star rating - but I’m an unabashed fan with a big nostalgic heart - so I’m keeping it. It’s been a favorite ever since that first viewing and I’ve watched it countless times since. It’s when Van Damme was at his best to see on the big screen before the ego and severe cocaine addiction took over. JCVD Still pumps out some fun movies, but nothing has come close to the excellence that is Hard Target. Now if they want to pair him up with Scott Adkins again and do a Hard Target 3 - I’d be all for that mayhem! 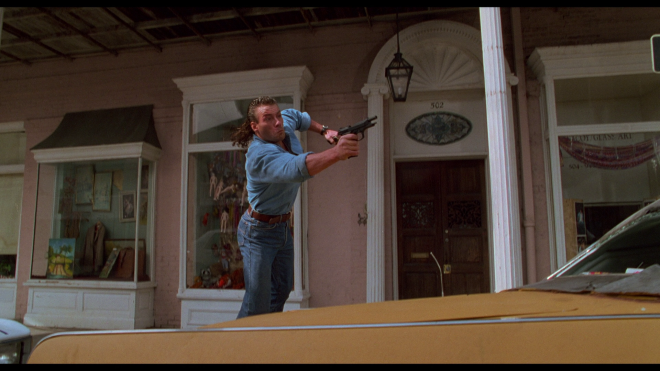 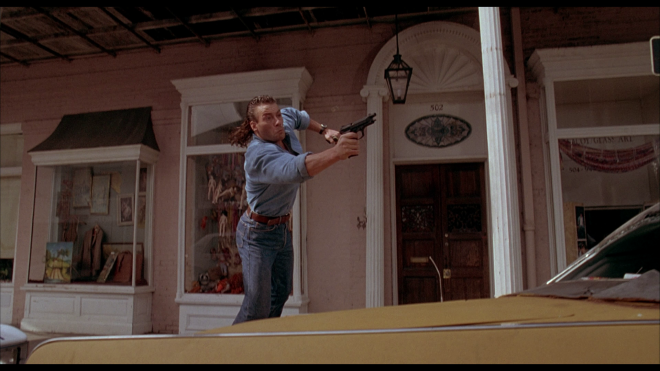 For how popular this film is, Hard Target hasn’t ever really enjoyed a great home video release - until now. This native 4K 2160p Dolby Vision transfer (with HDR10) easily outpaces all previous home video releases. Presenting Woo’s preferred 100-minute Unrated International Cut, there are still some uneven bits, small instances of slight speckling. Footage around the credits and any optical effects is a little rougher around the edges with a thicker grain structure and speckling. These are really only small nitpicks that don’t overly distract or tear you out of the enjoyment of the film. The vast majority of this presentation is genuinely excellent.

Details are sharp and crystal clear showing better detailing in clothing, production design, and the film’s New Orleans locations. I felt like I was seeing small details, particularly costume textures I’d never really noticed before. I mean, it’s always easy to spot Van Damme’s stunt double, but now you can really see the difference. The trick is to look for the mullet. From behind the poor stunt double looks like he has a furry toilet seat cover glued to the back of his neck! Film grain is healthy with an organic cinematic appearance but not overly noisy. It can thicken a bit with all the slow-mo footage, but that’s normal for the process. There’s no sign of any DNR or the horrible edge enhancement that riddled the past Blu-ray release. 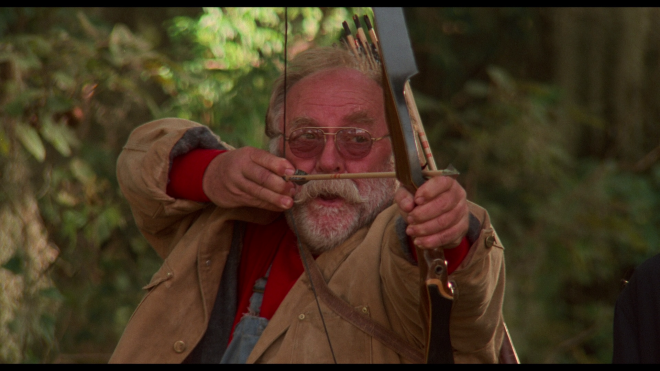 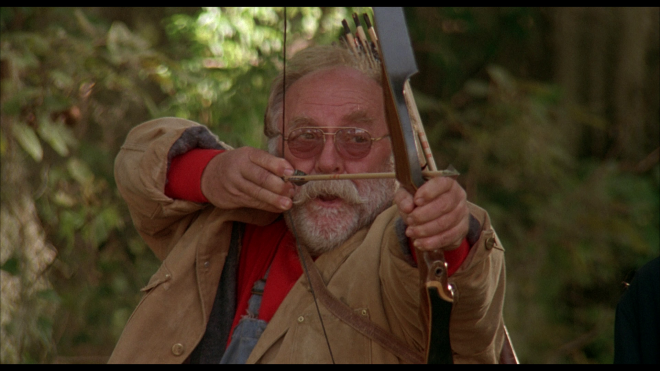 Dolby Vision HDR also earns some marks for colors and black levels. The old Blu-ray - and even the older DVDs - all suffered from poor color saturation and an overall too bright and flat appearance with inconsistent black levels. Shadows and colors are richly rewarded while maintaining the film’s lean towards yellow golden summer tones. Black levels are much better resolved this time out - in this 4K disc and the remastered 1080p Blu-ray - giving the image a better feeling of three-dimensional depth. This is especially the case with the middle hunt scene and the climax in the parade float warehouse. All around this is the kind of release I’ve been hoping to get for years. The new Blu-ray is pretty great if you’re not 4K-ready, but this new Dolby Vision transfer is where it's at. 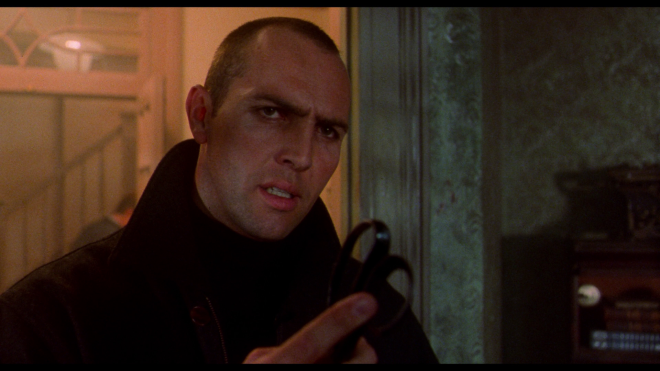 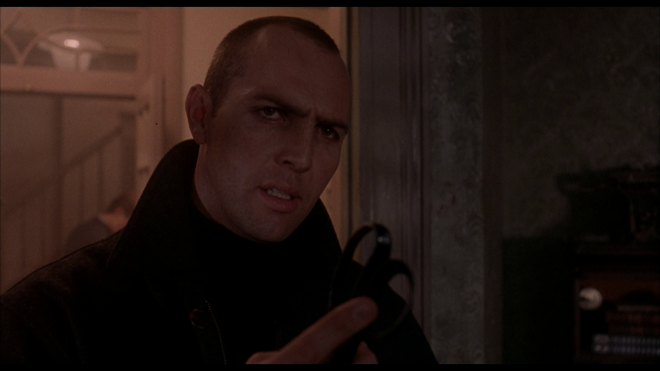 With the corrected 4K Ultra HD Blu-ray disc in hand, I'm pleased to report that the DTS-HD MA 5.1 mix sounds as it should. As this mix is essentially identical to past Blu-ray releases, it's still a beast of a mix. It'd been nice to get an Atmos or DTS:X track for this one, but as is it's solid. Dialog is clear, there's plenty of imaging across the channels. DTS Neural:X matrixes nicely giving some more space and dimension to the mix.

The issue with the audio on the first pressing of the disc was the right and left channels were flipped. This wasn't always noticeable as so much of the mix is fairly front/center focused, but when there was some movement you could easily notice the problem. The motorcycle chase sequence is a key example: there's a shot where Chance and Nat are under an overpass riding from left to right with the guys pursuing in a car drives in left to right. The original mix had these elements flipped. So that's what you really need to listen for.

Now, I'm still standing by the DTS-HD MA 2.0 track being a whiff. This goes for both the 4K and 1080p disc. It may or may not be a fold-down track, but it still doesn't sound that impressive. It’s more front-loaded and can be effective some of the time, but there are some action sound effects that’d be hitting the sides or travel around the channels but just don’t come to life. Going back to that same shot of Chance and Nat riding right to left, the sound of the motorcycle moves appropriately, but when the bad guy with the machine gun starts firing, that sound effect of gunfire is almost completely absent. This isn’t a terrible track, the dialog is clean, scoring still hits, and primary sound effects are still present - it’s just not as lively or impressive and even all that necessary.

Again, in case you get a copy with the wrong disc - follow the link to request your replacement disc:
https://www.kinolorber.com/hard-target-4k-disc-replacement 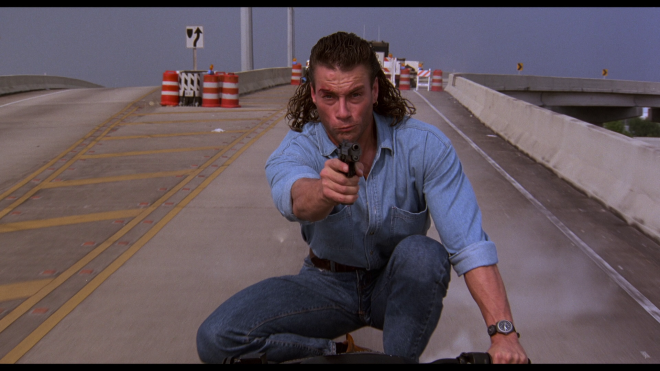 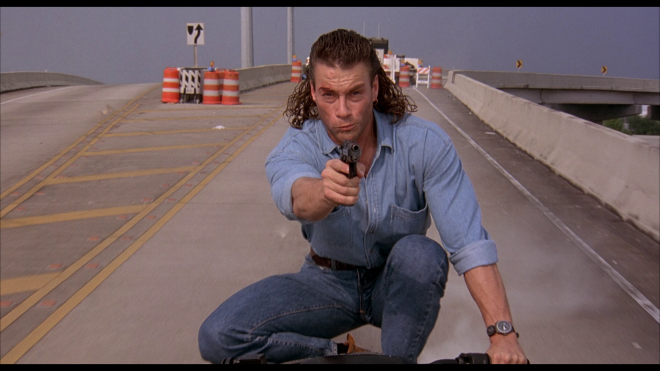 Not to sit around with just a new 4K release, KLSC gives Hard Target some new bonus features upgrades. The commentary track with Brandon Bently and Mike Leeder is a solid listen with the new cast and crew interviews well worth checking out. I would have loved to see what JCVD has to say about this movie today but apparently, an interview just wasn’t in the cards for this release. 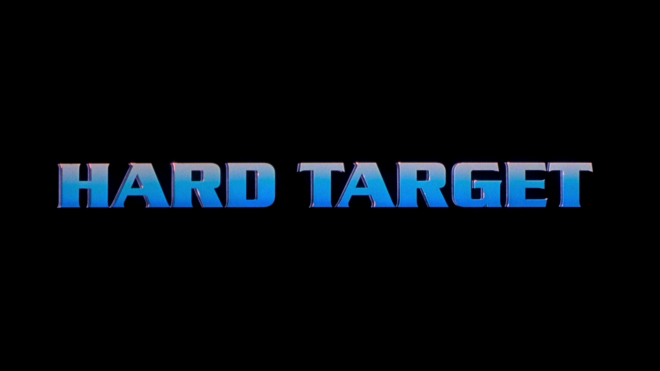 JCVD was a rising leading man star ahead of Hard Target. John Woo was a Hong Kong director Hollywood was desperate to hire before Hard Target. These two titans of action cinema came together for one hell of a ride. Full of high-flying stunt work, this film is a ballet of martial arts and bullets. A great supporting cast including Yancy Butler, Lance Henriksen, Kasi Lemmons, Arnold Vosloo, and a highly entertaining turn from Wilford Brimley ensures there's never a dull moment.

With an excellent native 4K Dolby Vision transfer, the film looks better than ever and now with the corrected audio track, fans can fully enjoy this classic 90s action flick. Bonus features may not be plentiful but there's some great stuff worth digging through. While it would have been great not to go through the disc replacement process, KLSC's new disc that should be arriving in mailboxes and in new purchases is a welcome upgrade.

However, if you did get a set with the wrong disc, here is the link for the disc replacement program:
https://www.kinolorber.com/hard-target-4k-disc-replacement