Perhaps the greatest toy commercial ever filmed, The Transformers: The Movie arrives on 4K Ultra HD Blu-ray from Shout! Factory in a glorious two-disc set. If you’re a child of the 80s, it was devastating losing favorite heroes but the promise of new figures was equally exciting! The film earns a beautiful native 4K Dolby Vision transfer for the Widescreen presentation while the Full Frame version gets a welcome remaster. After a few rounds of subpar-to-iffy home video releases, it’s nice to see this animated classic looking this good. Highly Recommended

“I’ve got better things to do tonight than die!”

Optimus Prime (Zandar) is on the verge of a major offensive against Megatron (Apu) and the Decepticons. But Megatron initiates a surprise attack against Autobot city on earth. With both the Decepticons and Autobots amassing critical losses in the battle - a far greater threat looms in the galaxy. The moon-sized planet-eating menace Unicron (a fitting role for Orson Wells) aims to destroy the Autobot Matrix of Leadership and all who oppose him. Now it’s up to Autobot warriors Hot Rod (Bender), Ultra Magnus (Rex Kramer), and their ragtag army to stop Unicron and his new minion Galvatron (Spock) from destroying the Transformer's home planet Cybertron. 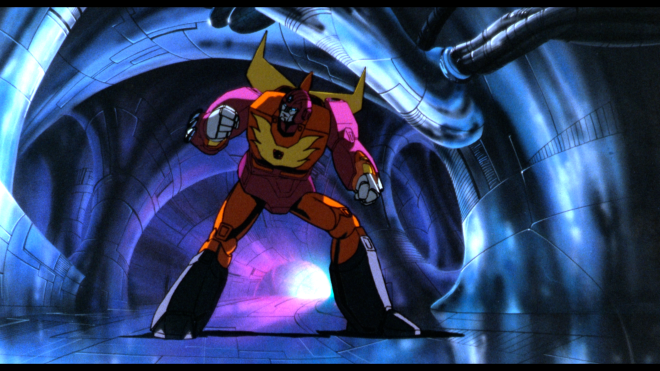 A long time ago in a mall multiplex far far away, a legion of children lined up to see their favorite animated action figure heroes on the big screen. Within minutes, their hearts were broken and their parents’ wallets were emptied as old heroes were killed off and a new core group of heroes and villains emerged. Critics didn’t get the film. Parents were pissed at the blatant commercialism marketing. Kids - while heartbroken at a particular Autobot death - were enthralled with all the new characters they could add to their collection.

I was one of those kids. While I don’t remember going to the movie I’ve heard the story enough times about how I completely lost it when Optimus Prime died. Apparently, I was screaming so badly that my Mom had to haul me and my older sister out of the theater. I never heard if we ever went back in or not but this film was a staple of my VHS diet growing up. We never bought a real copy, my Dad simply recorded the rental onto a tape that already had Super InfraMan on it ensuring my parents had a solid three hours of quiet time whenever that tape was rolling. 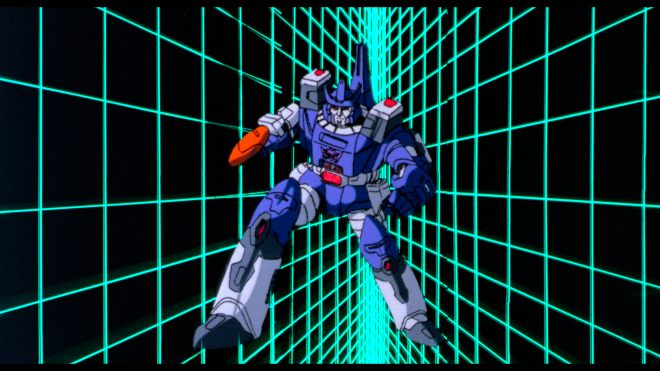 Like Josh said in his review, I too have watched The Transformers: The Movie more times than a near-middle-aged man probably should have. It’s pure nostalgic bliss for me. I can cynically deconstruct this movie and where and how it does or does not work, but that’d be a pointless effort since I love the movie warts and all. Every time I hear someone say “You’ve got the touch…” I immediately call back “You’ve got the power!” It’s a bad habit that’s gotten me into trouble over the years. Apparently, it’s not something you do during work meetings? But there are so many silly platitudes in that Stan Bush song it’s impossible to not start quoting it.

While I’ll admit that The Transformers: The Movie is a bit clunky - that title alone is an issue - it’s a fun movie. I enjoyed the new characters it introduced but I also appreciate how well it impacted and expanded the television series going forward. Before the film, the show was pretty well contained. After the film, the Transformers universe felt huge. There were entire new planets of sentient shape-shifting robots instead of just the Autobot vs Decepticon dynamic.  Galvatron became the main enemy while Rodimus Prime led team Autobots - until Optimus was resurrected. Who knew transformers could have ghosts? Starscream roaming around with Unicron’s head is the last real vivid memory I have of watching that show as a kid. The show may not have lasted long after this film, but that’s okay - Teenage Mutant Ninja Turtles were on their way.

Vital Disc Stats: The Blu-ray
The Transformers: The Movie arrives on 4K Ultra HD Blu-ray in a two-disc 4K UHD + Blu-ray with SteelBook packaging. No digital slip is included. The theatrical Widescreen presentation gets the 4K treatment while the Full Frame presentation gets the 1080p Blu-ray disc and the bulk of the bonus features. The 4K disc only has the audio commentary. 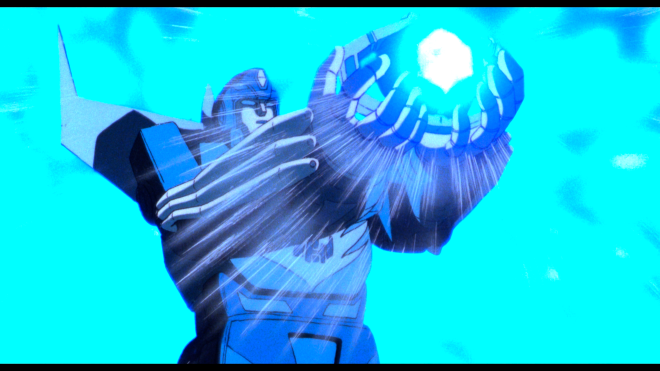 With cel animation, there’s only so much detail improvement you’re going to see with a release like this. There are some small improvements in fine lines and smaller details - but not a whole lot. The big differences for this release come in the form of color saturation and the overall condition of the elements. The 2016 release looked very hazy, had an unresolved grains structure, and there was quite a bit of speckling and damage throughout the film. This new restoration offers a much clearer image with bold colors. The hazy quality is gone allowing for some deep blues, reds, and yellows to appear. Film grain is apparent but maintains a natural appearance throughout without becoming too noisy or intrusive. HDR allows for some nice deep black levels - the void of space actually looks black instead of the nondescript gray/purple tone of past releases. Spectral highlights like the blue light of the Matrix of Leadership or the blue streaking whenever Blurr darts around the screen also pick up a nice boost.

It may not enjoy a 4K UHD presentation with HDR, but this new 1.33:1 Full Frame presentation is no slouch either. Culled from the same restoration as the 1.85:1 4K presentation, it too boasts a cleaner presentation, bold colors, with far less damage to the film elements. See the video below:

Now again, this is cel animation, any grit or dust that was caught under each cel is there to stay and in some sequences, there’s plenty of that. There are still some iffy areas here and there, that first shot of Hot Rod and Danny by the lake still looks as if it was in polarized 3-D. A couple of other odd-end moments like that still lurk around but they’re hardly distracting - you really do have to look for them to find them. Hot Rod still appears a bright pink-ish/red color but it’s consistent, even though the toy was a crimson red on orange. Maybe the animators had a strict budget for red? I don’t think The Transformers: The Movie will ever be something in the range of “picture perfect” but this new restoration goes a long way towards correcting the worst offenses in this film’s home video history. 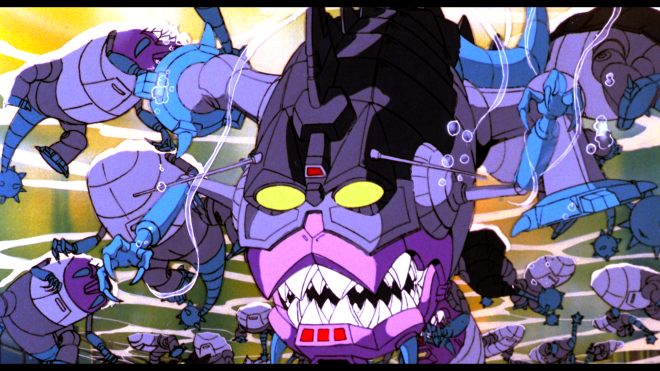 The same set of DTS-HD MA 2.0 and DTS-HD MA 5.1 audio mixes as the 2016 release have been ported over here. They’re not terrible but they’re hardly the most impressive tracks. The DTS-HD MA 5.1 mix is still the strongest of the two providing much more versatile sound element placement and imaging. The surround channels may not get much of a workout as it’s still pretty front/center channel loaded but it fares fare better than the 2.0 track. That 2.0 track is just very flat sounding and requires a notable volume boost where the 5.1 track doesn’t need that kick in the pants.

When this title was announced it was with a new Atmos mix, but sadly that wasn’t accurate. Maybe this is the best it’s ever going to get, but this film really could use an audio upgrade. 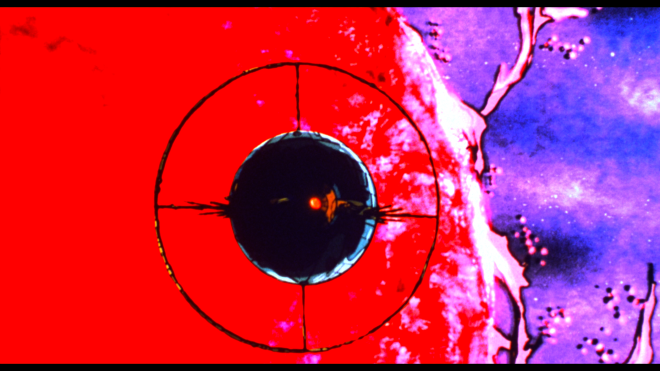 For this latest go-around on disc, Shout! Factory grabbed up a smorgasbord of new and old extra features. Not everything from the 2016 disc made the cut, but honestly, that’s okay by me, some of those missing extras didn’t blow my hair back or are outdated - like the restoration featurette, for example. All in all, it’s a decent package, the Feature-Length Storyboards with the film’s audio playing over the drawings are pretty cool. 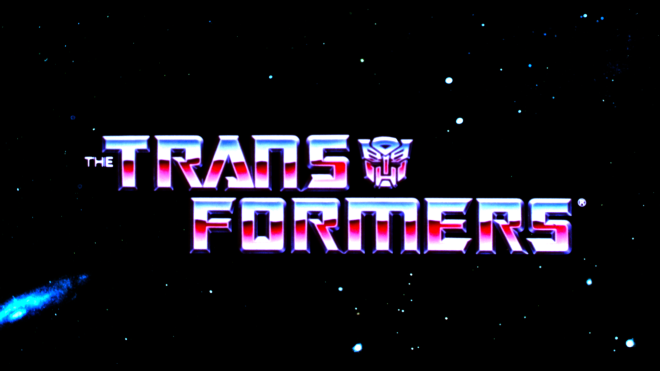 I feel like I may be in a bit of an old fogies club with my love for The Transformers: The Movie. It’s best loved by kids of a certain generation. Kids these days now have their own versions of these beloved robots in disguise. But the fun thing about revisiting a childhood favorite is now I get to make my son watch it with me. He gave it through the opening credits before running away to bang on his toy piano. I’ll call that a win.

Shout! Factory gives The Transformers: The Movie a fitting upgrade to 4K Ultra HD Blu-ray in time for its 35th Anniversary. This new restoration has gone a long way towards fixing up some of the most troubling issues the film has delt with over the years. We get the same audio as before but now a collection of new and archival bonus features. If you’re a fan of the movie - what’s one more release for the collection? Highly Recommended