Cameron Crowe's Almost Famous remains one of the best coming-of-age dramas about teenage love, our idealistic passion for music and the heartbreaking realities of the world. The beloved film takes center stage on Ultra HD with a great-looking 4K HDR presentation, the same DTS-HD track as before but a few new bonuses along with the familiar classics. Overall, the limited edition SteelBook makes for a Recommended addition to the library.

At the end of the day, Cameron Crowe's semi-autobiographical Almost Famous is about the music and about a specific period in American history when the idealistic optimism of the 60s clashed with the cold, matter-of-fact pessimism of the 1970s. It's about the love of music while still pure and raw, untainted by the commercialization of a profit-driven industry that sanitizes it according to its marketable potential. This is embodied in the scene when the fictitious band Stillwater leaves behind their lived-in tour bus for a glamorous private jet in order to book more concert shows. It is also about how that music impacts our lives, helps us cope through life's difficulties, and can wonderfully strengthen our bonds, as beautifully symbolized in the scene when everyone harmoniously sings Elton John's classic "Tiny Dancer."

Rather than it being from the perspective of the band, as is common of the musical drama, Crowe tells the story from the point of the view of the fan — the wide-eyed hopeful and credulous William Miller (Patrick Fugit). On tour with a band rising in mainstream popularity, he unexpectedly becomes their friend and somewhat confidant, which he was warned against by his cynical mentor Lester Bangs (Philip Seymour Hoffman). He is also made incidental witness to their challenge of negotiating with their mounting fame and success — which can be an egocentric drug for some like Jeff (Jason Lee) — while remaining true to the passion of simply making good music, as see in Russell Hammond (Billy Crudup). The victims caught in their crossfire are ultimately the deeply enthusiastic fans, as in "don't call her a groupie" Penny Lane (an absolutely wonderful, scene-stealing Kate Hudson).

Almost Famous is one of the best coming-of-age dramas about our teen-years mania for music, which we all share in some form or another. And more specifically, it is about the music that shapes us and awakens us to the heartbreaking realities of the world when we are still clinging to our idealistic hopes of the world that should be.

For a more in-depth take on the film, check out our review of the 2011 Bootleg Edition Blu-ray HERE.

Paramount Home Entertainment celebrates twenty years of Almost Famous to Ultra HD Blu-ray as a two-disc Limited Edition SteelBook with a Digital Copy code. When redeeming said code, owners are granted access to the 1080p HD digital version in Dolby Digital Plus 5.1 audio. A pair of dual-layered UHD66 disc sits comfortably atop one another on the same panel with the first featuring the 162-minute "Bootleg Cut" and the second containing the 122-minute theatrical version, along with all the supplements. Both discs are housed inside an attractive, sepia-colored SteelBook. At startup, viewers are taken directly to a static menu screen with the usual options and music. 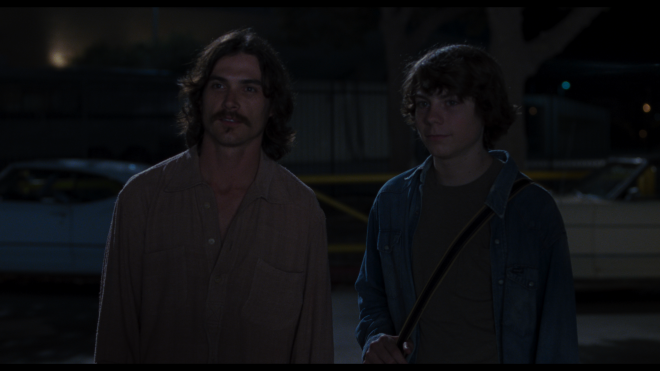 The coming-of-age drama takes Ultra HD on tour with a great-looking HEVC H.265 encode, giving fans a welcomed step-up over the previous mediocre Blu-ray although it's not the sort of leaps and bounds renovation we've come to expect of the format.

Coming from a brand-new remaster of the original 35mm camera negatives and approved by director Cameron Crowe, the native 4K transfer shows a nice uptick in overall definition with individual hairs in the cast and in Penny's fur jacket looking sharper for a majority of the runtime. We can better make out background information as well as the lettering in magazines and signs, and the creases, fabric and stitching in the costumes are noticeably more distinct. But, on the whole, the picture falls on the softer side, littered with several poorly-resolved sequences that are comparable to its BD predecessor, and this is especially true with the added footage for the "Bootleg Cut," such as when William and Penny walk through the park. Granted, this is due to some heavily stylized aesthetic choices made by the filmmakers where they wanted to replicate the look of an aged 70s film by using low-contrast and diffusion filters along with a couple of post-production tweaks.

For the most part, this looks great with excellent definition in a few long shots, but within the same scene, some moments can suddenly look dreary and lackluster, such as when William initially meets Lester Bangs showing a mix of the good and less pleasing. Overall contrast enjoys a nice though mild boost with cleaner and a tad more energetic whites, but it's a relatively minor jump and not by much. On the whole, the 4K video appears flat and muted due to the aforementioned creative visuals. Specular highlights and brightness levels are greatly impacted by these stylized choices, causing the hottest spots to noticeably bloom and lose some of the finer details, like the various light fixtures throughout. Meanwhile, blacks tend to be drabber and murkier for a good chunk of the runtime but also slightly truer in some articles of clothing. Shadow delineation is strong but not significantly improved.

Arguably, the best and most appreciable aspect of this Dolby Vision HDR presentation is the fuller, richer primaries, particularly the reds and blues often reminding viewers that they are in fact watching the movie on Ultra HD. However, as with everything else, the picture is also affected by the stylized cinematography, which unmistakably favors a bold earthy palette. On the one hand, the analogous color scheme that decidedly leans to the yellows, oranges and browns beautiful complements the artistic intentions. On the other hand, this also makes for a notably limited selection of secondary hues with much of the visuals continuously bathed in a solid warm blend of mustard-golden yellows, deep sepia tans, dark ambers, marigolds and rich oranges. Facial complexions are a tad more revealing with a slightly peachier, healthier tone, but they, too, can occasionally look drained and somewhat sickly in several sequences.

In the end, the new transfer is an improvement over its HD SDR counterpart, showing better definition and a more refined grain structure, giving the 1.85:1 image a lovely cinematic appeal that fans will love. But the upgrades are relatively small with a few poorly resolved moments scattered throughout that look flatly dull and largely lacking dimensionality. (Dolby Vision HDR Video Rating: 72/100) 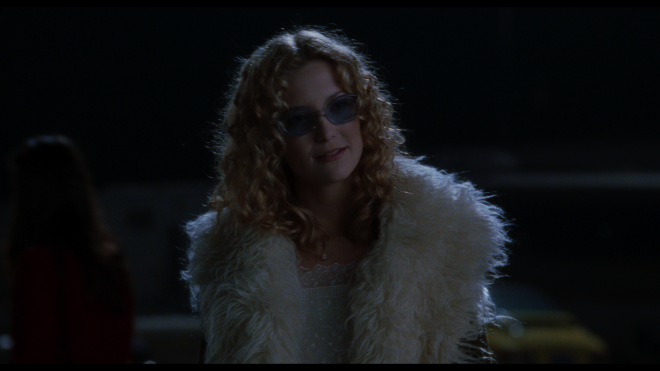 Arguably, the more disappointing aspect of this UHD edition is perhaps in the audio department, which ports over the same DTS-HD Master Audio 5.1 soundtrack enjoyed on the Blu-ray. Admittedly, while a new Dolby Atmos option would have been a much-welcomed upgrade, this lossless track remains an excellent and plenty satisfying mix, which stays true to the film's original front-heavy design, exhibiting superb clarity and definition in the mid-range. The music and song selections fill the entire soundstage with appreciably warmth and fidelity while the vocals are precise and distinct with outstanding intonation in the performances. A healthy, robust low-end provides a palpable weight and presence to the visuals. When applying the receivers' Dolby Surround or DTS: Neural:X up-mixing functionality, the music and a few scattered ambient effects convincingly bleed into the top heights, nicely enhancing the soundfield without feeling strained or artificial. Overall, it's a great soundtrack to a fantastic film.

For a more in-depth take on the audio quality, you can read our review of the Blu-ray HERE. (Audio Rating: 80/100) 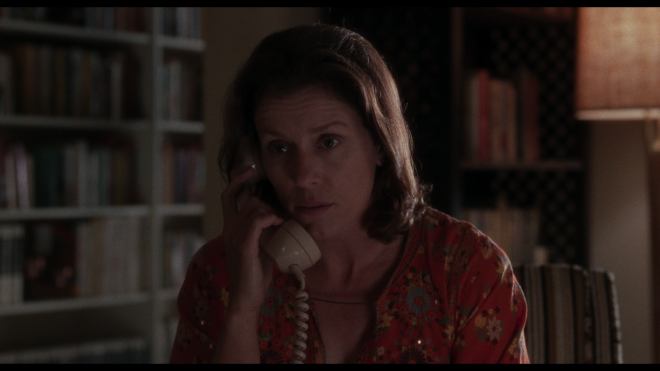 For this UHD edition, Paramount ports over the same collection of supplements as the previous Blu-ray release, but they also throw a few new surprises, all of which can be enjoyed on the UHD disc containing the theatrical version of the film. The "Bootleg Cut" disc comes with only the audio commentary as a bonus. 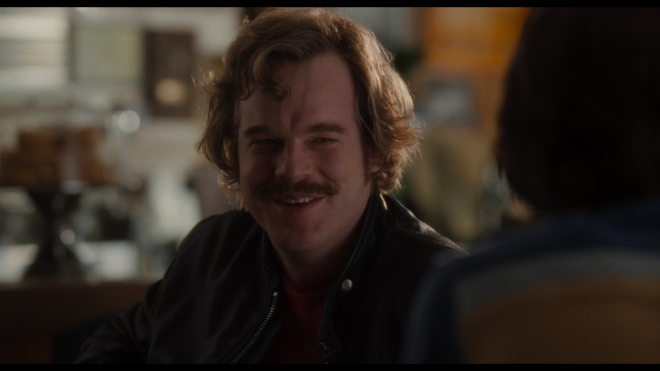 Full of heart, brains and soul while fueled by a love for rock 'n' roll, Almost Famous is about the music that shapes us and awakens us to the heartbreaking realities of the world when we are still clinging to our teenage idealistic hopes of the world as it should be. Celebrating its twenty-first birthday, Cameron Crowe's semi-autobiographical film remains one of the best coming-of-age dramas that never disappoints, especially the "Bootleg" edition. The beloved favorite takes center stage on 4K Ultra HD with a great-looking Dolby Vision HDR presentation, offering fans a nice if only small step-up over the Blu-ray, but featuring the same DTS-HD Master Audio soundtrack as before. Porting over the same set of supplements along with a few new surprises, the limited edition UHD SteelBook makes for a recommended addition to the library.