Howard the Duck may have missed the mark as a faithful adaptation of the Marvel comics character, but the George Lucas production is nonetheless eccentrically charming with its oddball mix of wacky visuals, adult humor and other horror elements. Celebrating its 35th Anniversary, the sci-fi comedy crash lands on Ultra HD with an excellent 4K video, a highly satisfying DTS:X mix but the same set of supplements as before. Still, the overall UHD package makes for a Recommended addition to the cult library and Marvel fans.

Try as I might, I can never seem to watch Howard the Duck without also reminiscing about my childhood and the first time I discovered this insanely wacky sci-fi comedy on VHS at my local video store. And to be perfectly honest, I'm not the least bit ashamed that my love and enjoyment of this George Lucas production is purely due to the nostalgia attached, which also applies to The Garbage Pail Kids Movie. For some reason, the rose-tinted glasses don't come on, however, until the moment when a hair-crimped Lea Thompson takes the titular anthropomorphic hero (voiced by Chip Zien and performed by Ed Gale) to meet the goofy lab assistant Phil Blumburtt (Tim Robbins). Memories of sitting in front of the large Zenith television rush in as I laugh at Phil crudely explaining evolution and the argument that soon followed between Thompson's Beverly and an understandably frustrated Howard.

In fact, their public quarrel by the fountain is a good example of what is both cringingly bad and bizarrely good about this cult classic. This moment where the two leads are essentially breaking up weirdly embodies what filmmakers Willard Huyck and Gloria Katz (American Graffiti, Indiana Jones and the Temple of Doom) were aiming for. When a group of kids innocently harass Howard and he scares them in retaliation, it becomes clear that they wanted to have it both ways — a kid-friendly feature with darker, mature themes to attract adult audiences. Howard soon learns of the challenges of adulting when finding work at an adults-only spa. Later, Beverly and he have a still-cringeworthy intimate encounter with oddly funny but overtly sexual innuendoes. It all culminates into sci-fi horror territory featuring a terrifically memorable Jeffrey Jones as the helpful Dr. Jenning, who creepily deforms into the Dark Overlord, modeled after Thog the Nether-Spawn from the original comics.

Unfortunately, Huyck and Katz never found the proper balance between the plot's lighthearted silliness and the more horror-suspense aspects, making for a tonally inconsistent and strange movie, made all the worse after some studio interference. Then again, this is also part of the film's outlandishly eccentric charm. Granted, the worst offense is completely missing the cynically lewd, mature, and satirical self-awareness of the comic books, but what we end up with is a ridiculously wacky oddity that can't be neatly defined, much like the character itself. In the last decade, Howard the Duck has increasingly grown in popularity thanks to the Marvel Cinematic Universe and rediscovered by mainstream audiences as the first film adaptation of a Marvel Comics property. But for me, the sci-fi cult classic will always be that bizarrely quirky comedy that crash-landed into my home and invaded by childhood.

Vital Disc Stats: The Ultra HD Blu-ray
Universal Studios Home Entertainment celebrates the 35th Anniversary of Howard the Duck on 4K Ultra HD Blu-ray as a two-disc combo pack with a Digital Copy code. When redeeming said code via Movies Anywhere, users have access to the HDX version with Dolby Digital Plus 5.1 audio. The dual-layered UHD66 disc sits comfortably opposite a Region Free, BD50 disc inside a black, eco-cutout case with a glossy slipcover. At startup, the disc goes straight to a static screen with the usual options along the bottom, music playing in the background, and quick access to special features along the left side of the screen. 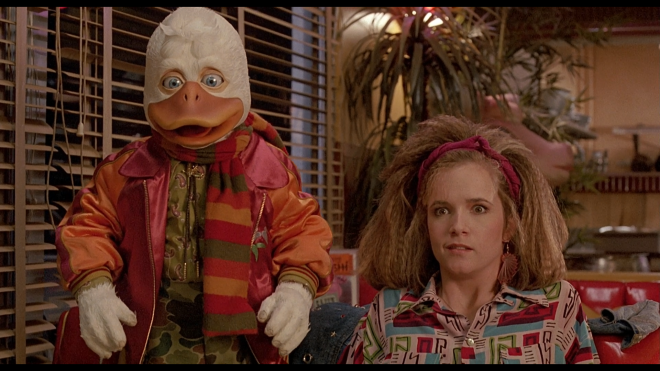 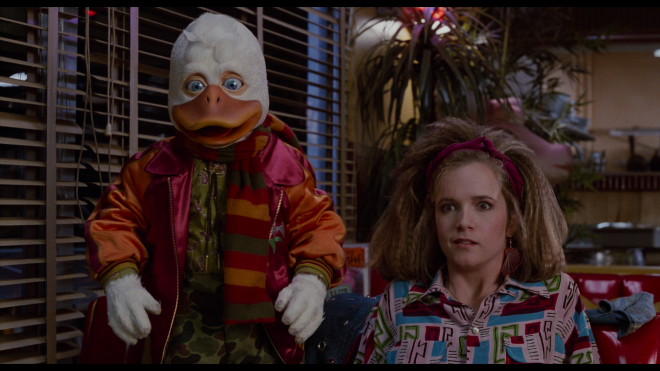 Feathers fly on Ultra HD thanks to a great-looking HEVC H.265 encode that was reportedly made from a fresh remaster of the original elements, making it the best it has ever looked on any format and sure to have fans flocking to own it.

After the somewhat average quality of the opening credits and the cold open in Duckworld, the native 4K transfer quickly displays an improved contrast and brightness balance. Not surprisingly, daylight exteriors are some of the best moments, extending the sci-fi comedy's shelf life with cleaner, more invigorated whites, such as in Howard's feathered body and the clouds in the sky. Poorly-lit interiors are not far behind, such as Beverly's apartment and the nightclub, which also noticeably benefit from richer, truer black levels and stronger shadow details. Specular highlights supply a radiant but crisp and narrow glow to the hottest areas, such as light fixtures and the magical rays shot by the Dark Overlord, making the climactic battle in the lab the transfer's eye-catching highlight.

The HDR10 presentation also comes with a more vibrant and wider array of colors, especially the lively greens of the surrounding foliage and the energetic blues in the sky and some articles of clothing. But interestingly, there are a few moments where reds can seem a bit inconsistent. On the whole, they are animated and pretty dynamic, but they can also appear a smidge faded within the same scene, specifically Howard's red sweater when he's arguing with Beverly outside the museum. The sweater is a vibrant crimson from one camera angle, but then, it changes to more of a blush rose from another angle. Thankfully, secondary hues remain unaffected by this, showing a better variety and giving the silly visuals a more flamboyantly cartoonish feel, particularly the deeper orange shade of Howard's bill as well as the richer, more spirited pinks, purples and magentas. And again, the climactic battle against the Dark Overlord is the go-to scene.

Overall definition also enjoys a welcomed uptick, showing cleaner, sharper lines in the costumes, buildings and lettering of signs. Various knick-knacks and trinkets decorating Beverly's apartment are plainly visible, individual hairs are discrete and the leaves of trees are distinct from a distance. The tiny details in the make-up effects and Howard's plumage are often razor-sharp and very well-defined, and facial complexions appear healthy with revealing, lifelike textures for much of the runtime. The visuals effects amazingly hold up well and look relatively good in 4K. A few slightly softer and poorly-resolved moments creep up here and there, but they don't take away from the movie's overall enjoyment. Awash in a very fine and consistent layer of natural grain, the 1.85:1 image has a lovely film-like quality with appreciable dimensionality throughout. (HDR10 Video Rating: 78/100) 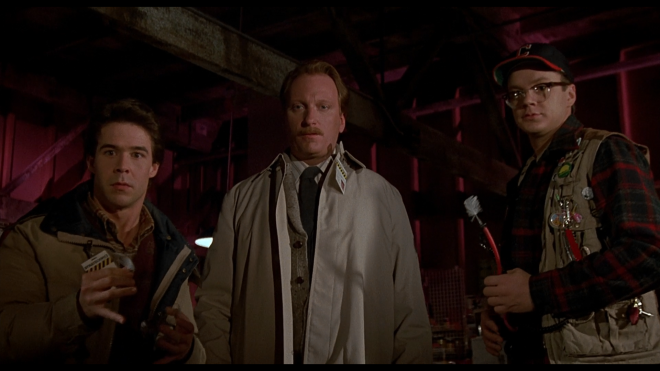 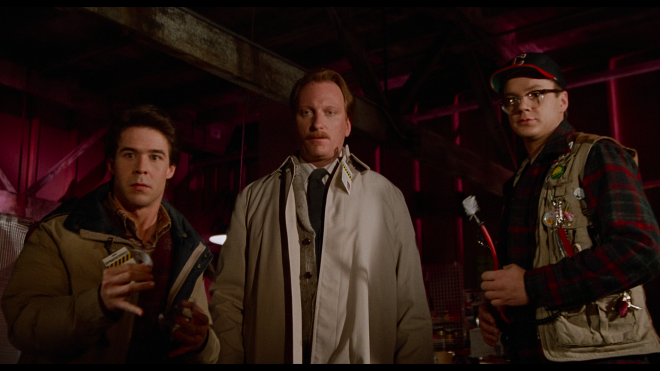 The cult favorite crash lands into home theaters with an excellent DTS:X soundtrack, which comparatively, reveals a notable upgrade from its DTS-HD MA counterpart.

From the start, imaging feels broad and spacious, filling the soundstage with music and various bits of background activity. The design exhibits superbly clean definition and warmth in the mid-range while maintaining outstanding distinct clarity during the loud action pieces, and the score displays impressive separation and acoustical details within the orchestration. Vocals are precise and very well-prioritized at all times with impressive intonation in the performances. Atmospherics are mostly contained to the fronts, convincingly and fluidly moving between the three channels. But the music and a few effects effortlessly bleed into the top heights and sides, further expanding the soundfield and nicely placing the viewer in the middle of the action. The most surprising and appreciable aspect of this object-based track is a hefty, robust low-end providing a palpable weight to the music and visuals, making for a terrifically engaging and highly satisfying mix for a cult classic. (Audio Rating: 84/100) 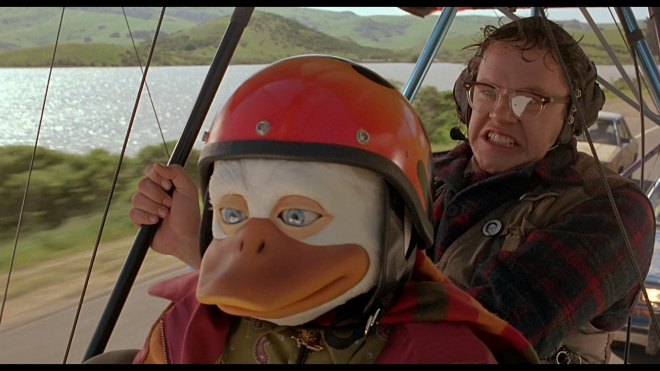 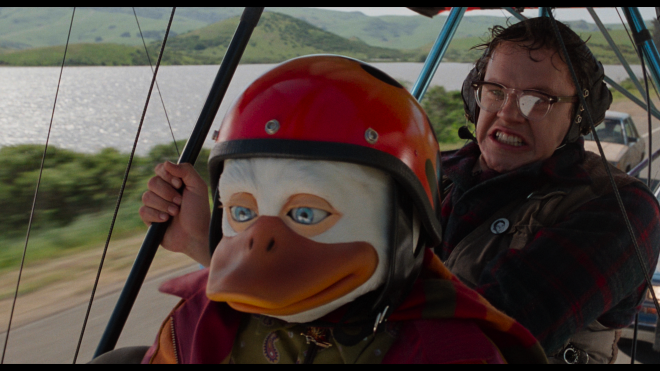 For this UHD edition, Universal Studios ports over the same set of supplements as the previous Blu-ray release and shared with that accompanying BD disc. 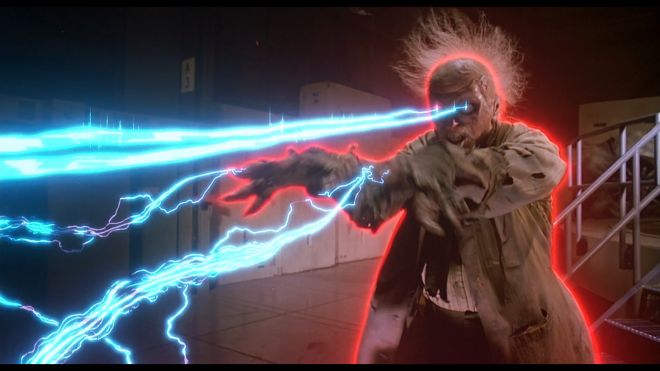 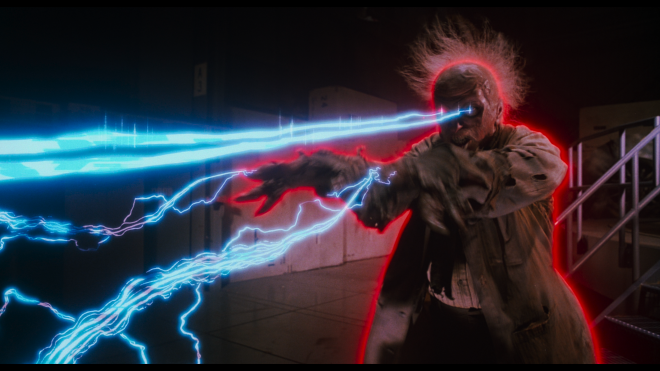 Although Howard the Duck missed the mark of being a faithful adaptation of the popular comic book series, the George Lucas production is nonetheless an outlandishly eccentric charmer thanks to its oddball mix of wacky visuals, adult humor and other horror elements. Having increasingly grown in popularity as the first Marvel film, the cult classic lives on in the childhood memories of many. Celebrating its 35th Anniversary, the sci-fi comedy crash lands on Ultra HD equipped with an excellent 4K HDR10 presentation and a highly satisfying DTS:X soundtrack, offering fans a marked upgrade over its Blu-ray predecessor. Featuring the same set of supplements as before, the overall UHD package is nonetheless recommended.