From the terrifying imaginations of George A. Romero, Dario Argento and Tom Savini, the two-part anthology Two Evil Eyes is a delightfully fun exercise in the macabre that essentially pays homage to one of the early masters of the horror genre: Edgar Allan Poe. Courtesy of Blue Underground, the cult chiller gives 4K Ultra HD the creeps with a great-looking Dolby Vision presentation, a good Dolby Atmos track but the same set of bonus material as before. The overall package nonetheless makes for a Recommended edition to the cult 4K library.

As banal and boring as it may seem, my favorite aspect of Two Evil Eyes is the two tales being gory modern retellings of Edgar Allan Poe stories. More accurately, they are very loose reimaginings of Poe's macabre classics with the second half being more faithful than the first. That second tale is from the warped, gruesome stylings of Italian horror maestro Dario Argento. The adaptation of "The Black Cat" relocates the plot to Pittsburgh where a series of grisly murders attracts the attention of crime scene photographer Rod Usher (Harvey Keitel), and this version opens with a scene straight out of "The Pit and the Pendulum." And the constant allusions to Poe's other works creatively sculptured into this one is what makes it a fun watch, starting with the names of characters such as Rod, his wife Annabel (Madeleine Potter), Eleonora (Sally Kirkland), Detective LeGrand (John Amos) and the neighbors Pym.

There are other references throughout as well, but the names are amusingly clever nods and rather comical. The first half of this two-part anthology, however, takes a different approach, as in it taking inspiration from Poe's "The Facts in the Case of M. Valdemar" instead of being based on it. From iconic zombie filmmaker George A. Romero, the short film still follows a hypnotist keeping a dying man, Ernest Valdemar (Bingo O'Malley), hypnotized at the point of death. But this time, that hypnotist is a medical doctor (Ramy Zada) in cahoots with Ernest's wife Jessica (Adrienne Barbeau) trying to swindle the old man of his fortune. What I love about Romero's take is the slow build, an eerily atmospheric tale that deliberately and measuredly amplifies the supernatural creeps and ends with surprise guest Tom Atkins as a stereotypical detective from some long-forgotten noir film.

Admittedly, horror fans have seen much better from these legendary filmmakers, but their collaboration in Two Evil Eyes, which includes graphic makeup effects by Tom "The Sultan of Splatter" Savini, is nonetheless a delightfully fun exercise in the macabre, one that essentially gives homage and appreciation to one of the early masters of the horror genre: Edgar Allan Poe. 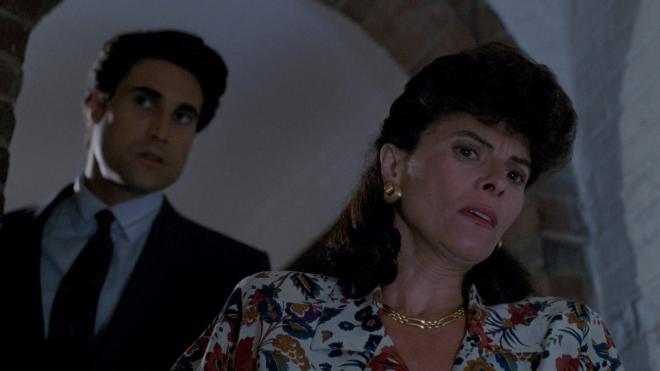 For a different take on the film, check out our review of the 2009 Blu-ray HERE.

Vital Disc Stats: The Ultra HD Blu-ray
Blue Underground brings Two Evil Eyes to Ultra HD as a two-disc package with reversible cover art and glossy slipcover. Housed inside the standard black keepcase, the triple-layered UHD100 disc sits on one panel opposite a Region Free, BD25 disc containing all the special features from the 2019 three-disc limited edition Blu-ray. At startup, viewers are taken straight to the main menu selection with full-motion clips, the usual options along the bottom and music playing in the background.

Much like the movie born of two minds, the cult chiller gives Ultra HD the creeps with an HEVC H.265 encode that's pretty much split down the middle in terms of overall quality.

Struck from the same restoration and remaster of the original camera negatives used in the 2019 limited edition Blu-ray, the native 4K transfer looks its absolute best in the Romero segment, boasting a gorgeous, sumptuous array of primaries. Reds are jaw-droppingly rich and animated while the greens in the surrounding foliage are lively and spirited. Likewise, secondary hues are vibrant with stronger variation, and skin tones appear healthy with lifelike textures, revealing every wrinkle and the smallest blemish beneath rosy cheekbones. Argento's second half, however, is the result of a dramatically different style and aesthetic, favoring a richer palette of browns, tans and oranges. The few primaries remain well-rendered and accurate, such in Annabel's outfits or fiery red hair, but the monochromatic approach to the story makes for a duller, drearier and ultimately limited picture, which admittedly suits the story's theme but looks rather lackluster.

The same applies to the contrast and brightness balance where the boost in Romero's story is more apparent and pleasing compared to Argento's grimier and gloomier tale. Overall, the Dolby Vision HDR presentation furnishes the first half with vivid, squeaky-clean whites, and specular highlights have a brighter, more radiant glow while maintaining outstanding visibility in the hottest areas, such as the sunshine through the windows. On the other hand, the second story is stylistically darker and dimmer with the small increase in the highlights being so minor it doesn't add much to the visuals and is nearly trivial. Nevertheless, whites remain clean and spot-on for the most part, especially in the daylight exteriors, and both stories benefit from the improved black levels with excellent gradations between the various shades. Argento's short struggles from time to time with visibility in the darkest corners of the frame, but shadow details in Romero's ghoulish tale are strong and top-notch.

Both stories also come awash in an overt layer of natural grain, but that grain is finer and better resolved in the first half while the structure is thicker and more pronounced in the second, making for a coarser and grittier presentation. Notwithstanding, overall definition is significantly sharper and more detailed in Romero's tale while Argento's film falls a tad on the softer side, which is due largely to the creative choices in the cinematography. Still, we can better make out the various objects decorating the background in both, and the stitching and textures of the fabric in clothes are distinct. In the end, the 4K video of the cult favorite is the result of two vastly different approaches from two talented visionaries, but this is a welcomed improvement over its HD SDR counterpart and the best the movie has ever looked on any format. The 1.85:1 image has an attractive film-like quality that fans will absolutely be happy with and will want to add to their library. (Dolby Vision HDR Video Rating: 78/100)

The chills and frights torment home theaters with a strong if not also somewhat spiritless pair of soundtracks. The first is a great Dolby Atmos track while the second is the same satisfying DTS-HD Master Audio 2.0 track as the previous Blu-ray. Between this and the troubled DTS-HD MA 7.1 track of the 2019 Blu-ray release, the object-based option is the superior and a fantastic improvement over its predecessor. However, many of the same issues from before still persist, if not made more evident and perceptible.

Overall, the extra-breathing room allows for better acoustical detailing and clarity in the mid-range, but it can also feel a bit strained and canned during a few of the loudest segments, coming off a tad too bright in the upper frequencies. The original front-heavy presentation can come across as contrived and artificial in several spots with some ambient sounds oddly stretched into the off-screen space, creating a distracting echoing effect. This happens most notably in a scene halfway through the first story when Adrienne Barbeau's character arrives home and walks down the stairs. The clacking noise of her high heels reverberates loudly in the right side of the room and doesn't smoothly blend into the center of the screen along with Barbeau. Nevertheless, the majority of the track delivers cleaner definition with a great sense of presence. It's just a couple of the lesser moments that keep the overall results from truly shining.

The same goes for the height channels where it's more of a mixed bag with atmospherics often feeling forced and easily localized. Some of the more satisfying bits are the sound of thunder ringing throughout the room or rain lightly falling from above the listening area. The ghostly voice of Ernest arguably offers the best moments, as it subtly bleeds into the top heights while still maintaining a strong front presence. The rest of the time comes off wooden and hollow with a few effects creeping overhead into specific speakers but failing to either expand the soundfield with satisfying effectiveness or generate any sense of envelopment.

On the other hand, dialogue reproduction is a significant step-up from the DTS-HD version, delivering more distinct and precise vocals with good inflection in the performances. Low bass is also nicely improved with a bit more heft and punch in a few spots, providing the cult chiller with some appreciable weight here and there. (Dolby Atmos Audio Rating: 72/100)

The same assortment of supplements from the 2019 limited edition Blu-ray is ported over for this Ultra HD edition and contained in the accompanying BD disc.

From the terrifying imaginations of two legendary horror filmmakers, Two Evil Eyes is a delightfully fun exercise in the macabre even though the two-part anthology doesn't exactly rank as some of the best from George A. Romero and Dario Argento. With gruesome makeup effects by the iconic master of gore Tom Savini, the double-feature has its moments and is worth a watch when appreciated as an homage to Edgar Allan Poe. Courtesy of Blue Underground, the cult chiller gives 4K Ultra HD the creeps with a great-looking Dolby Vision HDR presentation and a good Dolby Atmos soundtrack, offering fans a notable improvement over its Blu-ray predecessors. Although porting over the same set of bonus material as the 2019 limited edition release, the overall package nonetheless makes for a recommended edition to the cult 4K library.