An adaptation of Patrick Ness's YA book series, Doug Liman's sci-fi western Chaos Walking ultimately wastes a highly intriguing concept and crashes with a dud. On the plus side, it lands on Ultra HD with a great-looking 4K video, a better Dolby Atmos track and a decent collection of bonuses. The overall UHD package is Worth a Look for the most daring and curious.

It's always disappointing when an otherwise good, respectable filmmaker mangles a terrifically intriguing premise and manages only to deliver yet another tediously trite YA adaptation. Such is the unfortunate case for Doug Liman's Chaos Walking, an adaptation of Patrick Ness's The Knife of Never Letting Go, which follows early settlers of an Earth-like planet challenged by a condition that afflicts only the male species of the planet's inhabitants. This affliction, called Noise, turns men's thoughts into aurally visible puffs of translucent smoke with a mesmerizing, luminescent glow that hovers in the air, resembling crude oil floating in water. And in much the same way, their thoughts poison the environment around them and endangered their survival. The lack of privacy and always exposing their true feelings to each other has also brought the colony to shambled ruins twenty years later.

The prospect for something truly compelling, ripe with fascinating social implications, is all there, particularly in Tom Holland's Todd, a young man born on the new planet and aspires to be more than a farmer like his fathers (Demián Bichir and Kurt Sutter). For the first few minutes, the story briefly touches on the colony's hierarchical social structure with everyone having a predetermined function where the strongest and most callously cunning live comfortably as hunters and lawgivers. Mads Mikkelsen also stars as the town's Mayor David Prentiss, the only person who can control his mental noise and is narcissistic enough to name the town after himself. An encounter with the Mayor's son (Nick Jonas) where Todd momentarily reveals that he's possibly mastered his Noise as a weapon opens doors to other ideas, along with further questions about how exactly the women of this colony died. 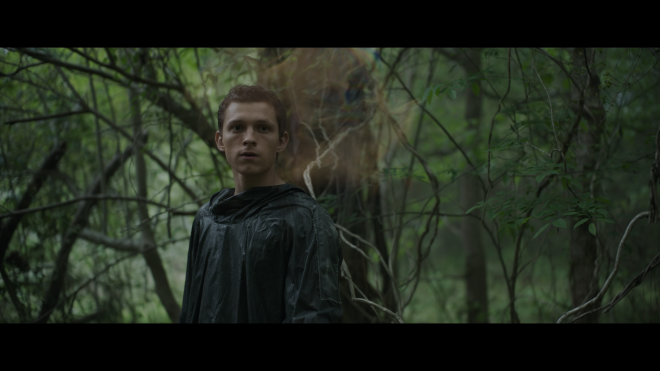 In this sci-fi western setting, Mikkelsen essentially plays the role of the leader for a posse of ruthless outlaws who have control of the town, or he could also be seen as the town's corrupt sheriff who rules with an iron fist. In either case, the tension and possibilities in that ultimately prove to be just fleetingly thoughts, brushed aside in favor of other ideas that also go nowhere. And this is especially the case when female astronaut Viola (Daisy Ridley) crash lands near the town, spurring a frenzy among the men not only for being a woman in a literal man's world but also as Todd's first encounter with a woman. Her presence generates a mob mentality in the men who see women as a threat while the town's preacher (David Oyelowo) outright pronounces her as a sinful abomination. In Todd's attempt to help Viola, Liman drops little breadcrumbs about honest communication and the fear of being emotionally exposed.

Nevertheless, and as with everything else, Chaos Walking never commits to or further explores any of the potentially intriguing and more ambitious concepts that it touches on. The filmmakers are plenty content with simply alluding to them in favor of the stereotypical YA trope of the young fighting the old and ostensibly bringing an end to seemingly outdated traditions. The script goes further by relying on archetypes for engaging the audience and less on characterization or better fleshing out their protagonists. If it's not Mikkelsen acting the typical merciless villain twirling his figurative mustache, then it's Holland continuously crushing on Ridley but always betrayed by his Noise. It's as though the filmmakers are banking on the "will-they-won't-they" device to draw viewers and keep moving the plot. As a sci-fi western, Liman had the opportunity to break the YA mold, but in the end, the adaptation is more of a conventional stroll through familiar territory than the chaos promised by the film's title.

Lionsgate Home Entertainment brings Doug Liman's Chaos Walking to 4K Ultra HD Blu-ray as a two-disc combo pack with a flyer for a Digital Copy. The code can be redeemed via moviesredeem.com or through VUDU where users have access to the 4K UHD version with Dolby Vision HDR and Dolby Atmos audio. The triple-layered UHD100 disc sits comfortably on the panel opposite a Region A locked, BD50 copy of the movie. The two discs are housed inside a black, eco-cutout case with a glossy slipcover. At startup, the disc goes straight to an animated screen with music playing in the background and the usual options along the bottom. 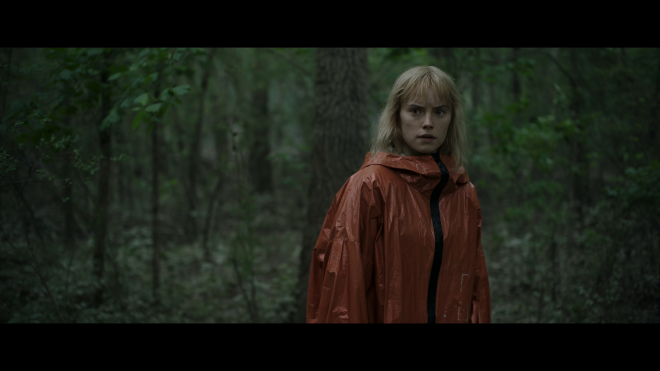 Chaos erupts on Ultra HD with a great-looking HEVC H.265 encode, boasting excellent definition for a majority of the runtime. Shot entirely on the Arri Alexa camera system capable of 6.5K resolution, the elements were mastered to a 4K digital intermediate, and for the most part, the native 4K transfer shows sharp detailing in the various buildings, the ragged clothing and the surrounding foliage. However, several sequences fall short of the best moments, manifesting some very mild noise in few exterior medium shots, negligible aliasing along the sharpest edges of buildings and trivial moiré patterns on a fence when the kids arrive at Farbranch. Nevertheless, the 2160p video is quite beautiful and at times captivating, bathed in true, midnight blacks and rich penetrating shadows, providing the 2.39:1 image with a lovely cinematic quality and appreciable depth.

The Dolby Vision HDR presentation displays strong contrast balance, supplyinng resplendent, squeaky-clean whites to the fantastical visuals. All the while, Ben Seresin's cinematography enjoys crisp, vivid specular highlights, adding a crunchy brilliance to the clouds, a tight dazzling radiance to the gun blasts and a mesmerizing, luminous glow to the Noise. The attractive photography also boasts an array of sumptuous primaries with bold, lively greens and bright, energetic blues being the standouts. Secondary hues are equally impressive and pleasing, bathing the western-themed towns in lots of browns ranging from deep, rich caramels and mochas to softer yet spirited sepias and beiges. Even better are the animated blends of purples and magentas into the electrifying blues of the Noise, gun blasts have a vibrant canary yellow intensity, and Viola's outfit is a vivid tiger orange. Facial complexions appear healthy with a rosy peachiness in the skin tones and revealing, lifelike textures in the entire cast. (Dolby Vision HDR Video Rating: 78/100) 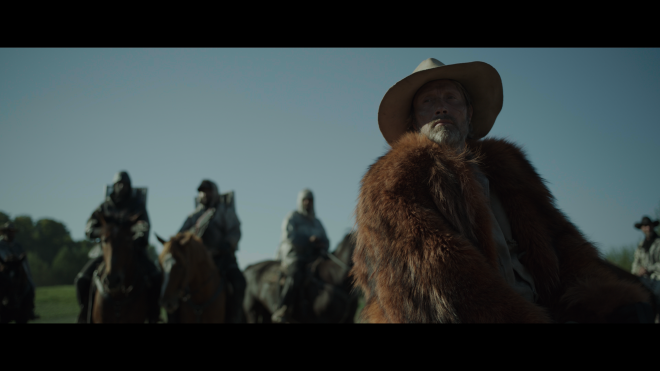 The sci-fi western crash lands into home theaters with an outstanding and largely satisfying Dolby Atmos soundtrack that fills the room with various noises of the New World's native wildlife. In the distance, what sounds like birds singing and calling resonates across the entire system on several occasions while the rustling of leaves in trees are subtly heard above the listening area with convincing effectiveness. Action sequences come with plenty of debris effects flying overhead and landing all around, and while wandering inside the crash site, voices echo throughout the room, all of which do great at generating an amusing hemispheric soundfiled. In truth, Marco Beltrami and Brandon Roberts' score performs a majority of the work by filling the three front channels evenly while lightly bleeding into the surrounds and top heights, creating highly-engaging and broad half-dome soundstage exhibiting an extensive and dynamic mid-range with appreciable warmth and fidelity. The loudest moments are not only marked with notable clarity and detailing, but the vocals are also precise and distinct, never drowned out by the chaos. The low-end is not particularly memorable, but it packs a welcomed punch with plenty of oomph to rattle the walls in a few spots, making the object-based mix a good deal of fun. (Dolby Atmos Audio Rating: 86/100) 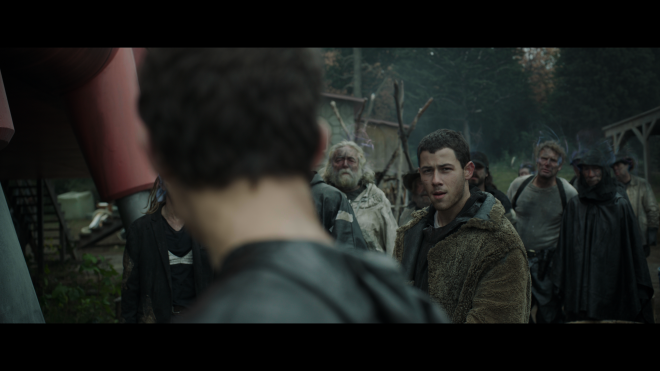 The same set of supplements are shared between the UHD and the accompanying Blu-ray. 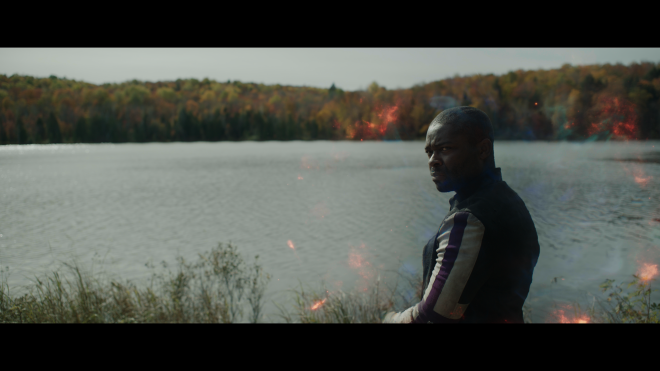 A highly intriguing concept ripe with poignant social implications feels largely wasted in Doug Liman's sci-fi western Chaos Walking, an adaptation of Patrick Ness's YA book series about off-world settlers at the brink of ruin due to a condition that only afflicts the men. Starring Tom Holland, Daisy Ridley, Nick Jonas and Mads Mikkelsen, the movie features good performances, mesmerizing visuals and impressive stage production, but with a script that fails to further explore its own ideas in favor of stereotypical tropes, it ultimately crashes with a dud. On the plus side, the film lands on Ultra HD with a great-looking Dolby Vision HDR presentation and an even better Dolby Atmos soundtrack. With a decent collection of supplements, the overall UHD package arrives as a good disc, bad flick, but it is, at least, worth a look for those curious or for fans of the book series.