The incoherent and convoluted Final Fantasy VII: Advent Children was blatantly made for those who have played the game on which it was based while putting the uninitiated to sleep. Arriving on 4K Ultra HD, the video presentation is a decent step-up over the Blu-ray with a better and more satisfying Dolby Atmos soundtrack. With the same disappointing collection of supplements as before, the overall UHD package can be Skipped.

The best and most memorable movies have one thing in common. The plot centers around a single, well-understood idea motivating all the action and the characters involved. This is true also of the grand, sweeping epics, such as Lawrence of Arabia or Lord of the Rings, and the elaborately complex sci-fi adventures, like Andrei Tarkovsky's Solaris or The Matrix. Unfortunately, someone forgot to tell the creators of Final Fantasy VII: Advent Children, a spectacularly boring and incomprehensible waste of time guaranteed to put viewers to sleep. For those unfamiliar with the video game series on which it is based, the story is needlessly and ridiculously complicated, taking place years after some mysterious event that apparently created a black-ooze disease. Clocking in at over two hours, the creators miraculously fail to explain any of the gratuitous visuals or the characters, assuming the audience simply knows.

To be completely honest and straight to the point, this CG-animated adaptation is an absolute chore to sit through, weighed down by its own excess and its attempt to do more than it clearly can not do. Having to do with some convoluted idea about a "Lifestream," spirits, aliens, the aforementioned disease, a dead villain from who knows where plotting resurrection and a shady corporation — none of which ever seems to really take center stage — the movie presumably follows Cloud Strife, whose only genuine character trait is his ability to drive a giant motorcycle comically hiding a slew of swords that can assemble into an even larger sword than himself. I suppose wielding that thing is a talent in itself, but in either case, Cloud is absurdly stale and uninteresting as the film's hero, made all the worse by a trio of motorcycle baddies with mommy issues and Cloud's equally dull circle of friends who conveniently possess bizarrely, unexplained magical talents to save the day.

By the time we wake up to the movie's disappointing conclusion, we discover Advent Children is ultimately a sleep-inducing snore-fest jam-packed with too much going on and failing to be about anything at all. This is storytelling at its most mundane. 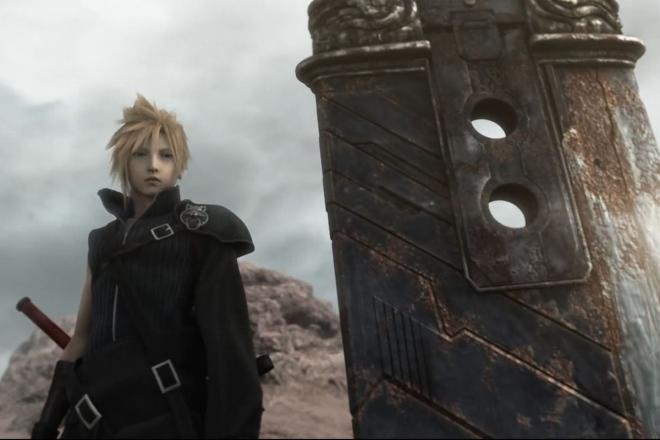 For another take on the film, check out our review of the 2009 Blu-ray HERE.

Sony Pictures Home Entertainment brings Final Fantasy VII: Advent Children to 4K Ultra HD as a two-disc combo pack with a Digital Copy code. When redeeming said code via sonypictures.com/MAredeem or MoviesAnywhere, users are granted access to the 4K digital version in HDR10 with Dolby Atmos audio. The UHD66 disc sits comfortably on the panel opposite a Region Free BD50 copy of the movie. Both are housed in the standard black keepcase with a shiny cardboard slipcover. At startup, viewers are directly taken to a static screen with the usual menu options along the bottom while music plays in the background.

Advent Children lands on Ultra HD with a mostly passable yet disappointingly average HEVC H.265 encode, coming from a 2K digital intermediate. On the whole, the picture enjoys better definition with slightly shaper detailing in the animation work, just enough to offer a noticeable step up over its Blu-ray predecessor. However, the upconverted transfer is largely impeded and limited by its 1080p source, falling on the softer side for a majority of the runtime with several poorly-resolved moments looking the equivalent of HD resolution. Much of the action is also littered with evident instances of aliasing and flickering along the sharpest edges of buildings and swords, and there are hints of moiré patterns in the background of some scenes, particularly in those scenes with horizontal blinds in the windows.

The 4K HDR10 presentation doesn't benefit significantly from the limited cinematography, which favors a monochromatic palette heavily bathed in flat grays, steely blues and deep, rich blacks. Granted, the visuals display good gradational differences between the various shades, ranging from silver, pewter and graphite to charcoal, ebony and velvety midnight shadows.  Occasionally, some bursts of color, namely the stony sapphire blues and electrifying cerulean, add pep and vigor to the action, aided by the very few splatters of crimson reds in clothing and fiery oranges in explosions. But in the end, much of the animation remains tonally uniform and lacking appreciable depth, which ultimately makes for a rather dull production.

The same goes for the overall contrast balance with several scenes showing a discernible improvement while others don't look much different than their HD SDR counterparts. By and large, whites benefit from the boost, looking brighter and more vivid, and specular highlights are a tad narrower with an appealing brilliance and sparkle on various metallic surfaces. Sadly, this, too, is a mixed bag with some of the hottest spots blooming and washing over the finer aspects in white globs, most noticeably in several poor-lit interiors. Also, instances of posterization around those white globs or in the sky are apparent, and hints of mild banding rear their ugly hands from time to time. (HDR10 Video Rating: 62/100)

Coming in stronger and with better results than the video is a generally satisfying Dolby Atmos soundtrack — in both Japanese and English — although it, too, comes with its share of issues worth noting. To start, the low-end has a bit more oomph and mass than before, providing a welcomed, weightier sense of presence to the animation and music. But at the same time, it's not quite as robust and substantial as the visuals would suggest, feeling somewhat restrained and lacking depth in some of the action sequences. The same goes for the opposite end where the upper frequencies suddenly flatten out and feel constrained, making for a rather uniform and largely fixed mid-range.

Thankfully, none of this significantly affects the rest of the presentation, as the loudest segments still maintain good definition and clarity. Various atmospheric effects discretely and convincingly move across the screen and expand into the top heights for a very satisfying half-dome soundstage. The surrounds and overheads are also employed on several occasions with strong directionality, supplying a few sequences with a decent sense of immersion. Vocals are distinct and well-prioritized in the center from beginning to end. In the end, this is an excellent mix. (Dolby Atmos Audio Rating: 78/100)

The same set of bonuses are ported over this UHD edition and found in the accompanying Blu-ray disc.

To be completely honest, Final Fantasy VII: Advent Children is an incoherent mess of a story with various convoluted ideas competing to take center stage and ultimately failing to be the least bit entertaining. The movie, which is actually a tie-in adaptation or an expansion to the video game, is really only for those familiar with the game while excluding the rest of the moviegoing audience, making it an utter, sleep-inducing chore to sit through. Arriving on Ultra HD, the 4K HDR10 presentation shows a decent step-up over its HD SDR counterpart but also comes riddled with other problems of its own. Thankfully, the Dolby Atmos soundtrack offers a better but still small improvement over its predecessor. With the same disappointing collection of supplements as before, the overall UHD package can be skipped.