Six-String Samurai is a hilariously inventive mashup about a lone katana-wielding guitarist on a pilgrimage across a post-apocalyptic America, and the cult favorite remains a wildly bonkers good time after twenty-three years. The absurdist action-comedy puts on an excellent show on Ultra HD equipped with an outstanding 4K video, a fantastic DTS-HD MA track and a treasure trove of new bonuses. Housed inside a beautiful limited edition box, the overall UHD package is a Recommended addition to the cult library.

It only makes sense to set a sci-fi tale about a lone katana-wielding guitarist on a pilgrimage across a desolate, post-apocalyptic America to also borrow heavily from the likes of Italian westerns, classic Japanese samurai films and The Wizard of Oz. Well, kinda. The point is that if one is going to take inspiration from several contrasting genres, they might as well embrace the gonzo insanity that it entails. And Six-String Samurai delivers on that promise while having a rocking good time doing so. The brazenly bonkers and seemingly nonsensical plot is like the forgotten love child of Alejandro Jodorowsky's El Topo, Kenji Misumi's Lone Wolf and Cub series and George Miller's Mad Max franchise. Yet, the cult action-comedy by Lance Mungia in his directorial debut manages a coherent story while littering the absurdist mashup with various pop-culture nods that amazingly add to the zany silliness.

Early on, upon seeing a trio of bounty-hunting bowlers stage a bar fight with our would-be hero, we know we're in for a wildly unpredictable yet deliriously fun ride. And this couldn't be made any clearer than when a nameless stranger modeled after Clint Eastwood from Sergio Leone's Dollars Trilogy enters the aftermath. At once, the sequence is meant to showcase the martial arts talents of the film's star, Jeffrey Falcon, who also co-wrote the script with Mungia in hopes of transitioning from his Hong Kong cinema fame to the American stage. Although it failed to catapult him to Hollywood stardom, the action nonetheless demonstrates his skills while also revealing a deadpan comedic charm that should have at least garnered him a career in B-movie features. If a lifeless Steven Seagal can make it and continue working to this day, then why couldn't Falcon with his superior acting chops.

Be that as it may, the bar fight is also great for establishing the story's pace and overall tone, fueled by a fast editing style that feels reminiscent of early Peter Jackson. The eye-rollingly dumb puns are uttered with rapid-fire momentum while the visual nonsense is a mix of slow-motion hero-poses and accelerated strikes. And somehow, it all stays bafflingly on tempo, as though it were itself some sort of musical composition. Simultaneously, the cartoonish brawl introduces the central villain — the heavy metal-playing Death dressed as Slash from Guns N' Roses, another clever tip of the hat for shits & giggles. Given everything else making up this wacky motley of tomfoolery, they might as well throw in the personification of the Grim Reaper and make him partial for the aggressive, shrieking, heavily distorted beats of heavy metal. Oh, and give him a trio of archers as his bandmates for good measure.

Although admittedly a complete madcap absurdity, Six-String Samurai remains a surprisingly inventive and hilarious pastiche, shrewdly unfolding into a secret Valentine heart to the evolution of rock 'n' roll music. Set in an alternate history where 1950s Cold War tensions ended in nuclear war and Elvis became the literal king of Lost Vegas, the desert wasteland is populated by caricatures of various musical styles, from Ritchie Valens to mariachis. All the while, our nameless hero is a Buddy Holly clone traveling the ruins determined to make it big at the Emerald City-looking Vegas, even at the cost of abandoning his traveling companion (Justin McGuire) with a family of cannibals straight out of a 50s sitcom. It's a boisterously rollicking good time from start to finish, moving from one rocking hit to another with a frenetic energy that makes for a memorable show. 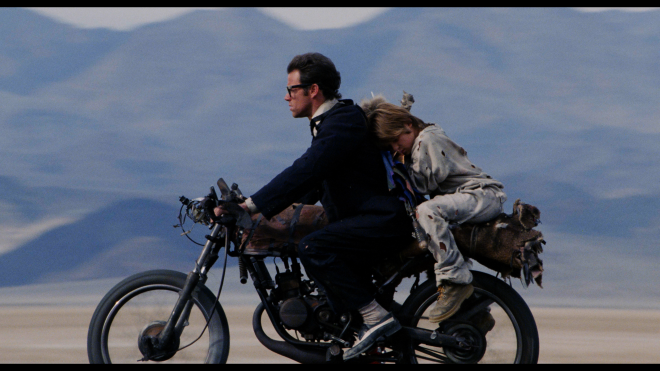 Vital Disc Stats: The Ultra HD Blu-ray
After years of surviving and foraging through home theaters on DVD, Six-String Samurai finally makes it to the 4K Ultra HD stage as a deluxe two-disc Limited Edition set, courtesy of Vinegar Syndrome. The dual-layered UHD66 disc sits comfortably opposite a Region Free, BD50 copy inside the standard black, eco-elite keepcase with a sturdy slipcover and reversible cover art. They are joined by a glossy, 40-page book with color photos, a brief explanation about the restoration, a letter of appreciation by Lance Mungia and a detailed essay by the director. They are all packaged together in a gorgeous magnet clasp box that features new artwork. At startup, the disc goes straight to a menu screen with the usual options along the bottom, full-motion clips and music playing in the background. 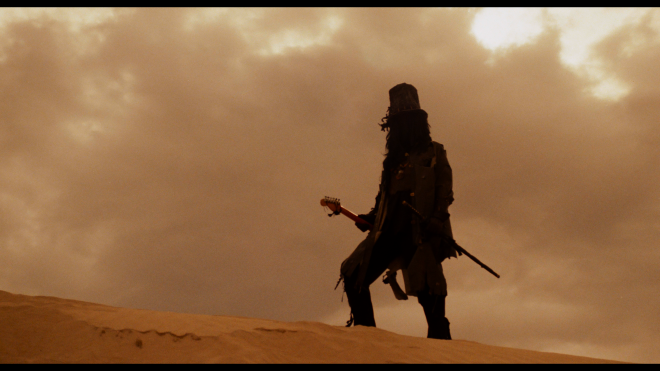 The cult-favorite plays a mean guitar on Ultra HD thanks to a brand new restoration and remastering of the original 35mm camera negatives. Supervised and approved by director Lance Mungia, the HEVC H.265 encode arrives with phenomenal results, immediately boasting an improved contrast and brightness balance that blows all previous versions to dust.

From start to finish, the native 4K transfer pops with energy and is intensely vivid to the point where can almost feel the desert heat while showing razor-sharp details in the hair, costumes, dilapidated buildings and various vehicles. Individual pebbles and rocks are always distinct from a distance, and specular highlights are resplendent and crisp, displaying a tight, narrow glow in the clouds and the sun beaming off the cast's foreheads. Metallic surfaces, from the swords and chrome of the vehicles, glisten with a realistic sheen. A few moments of mild softness creep up here and there while a small dip in resolution in a few others brings the overall quality just shy of perfection.

The HDR10 presentation also displays inky, midnight blacks with outstanding gradational differences between the various shades, particularly in the outfits of Death and his bandmates. Like the battle with the underground mutants, dark and poorly-lit sequences maintain excellent visibility within the gloomiest shadows. It is also during these scenes, along with the bar of Fallout, that the grainy picture becomes denser and almost noisy, but it's nothing too egregious to ruin its overall enjoyment.

The cinematography largely favors an earthy palette bathed in a variety of browns, tans and yellows, all of which are richly saturated and abundant. There are few splashes of lush, full-bodied primaries, like the reds and blues of some costumes, occasionally brightening a scene with the hundreds of gumballs falling out from the Plymouth being the most notable. Facial complexions appear natural and accurate to the scorching climate with revealing lifelike textures. 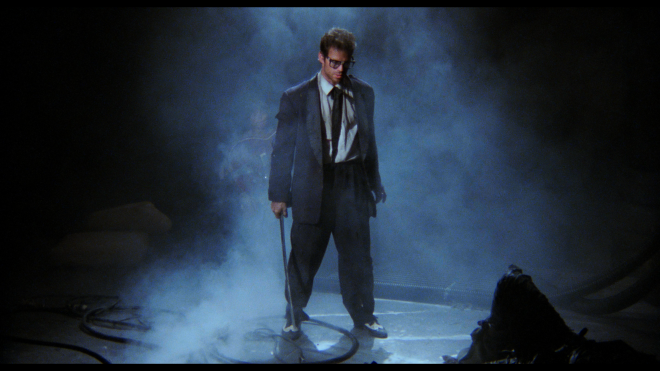 Our rocking samurai hero wanders the apocalyptic wasteland equipped with an excellent DTS-HD Master Audio 5.1 soundtrack that almost immediately draws viewers into the action. Right from the start, the gonzo opening feels broad and expansive with effects seamlessly and discretely bouncing across the entire soundstage. A surprisingly clean mid-range exhibits good definition and separation in the music and the few action-packed sequences.  But at the same time, there isn't much happening in the upper frequencies, making those same scenes feel uniform and somewhat flat. Dialogue is precise and well-prioritized amid the wild mayhem even though the ADR work can be a tad distracting at times. The low-end isn't particularly stand out or add much heft, but it's sufficient to give the visuals some appreciable weight. A few atmospherics occasionally employ the surrounds, but they're fairly subtle, just enough to expand the soundfield. Ultimately, the music does much of the work, making for a satisfying and terrifically engaging lossless mix. (Audio Rating: 80/100) 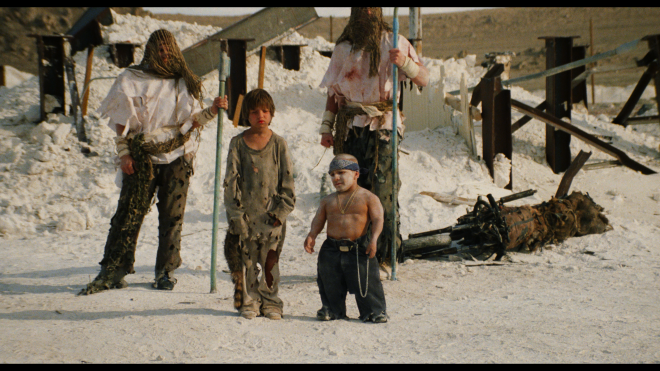 For this UHD edition, the commentary tracks are shared between both discs while the accompanying Blu-ray contains all the brand-new supplements. 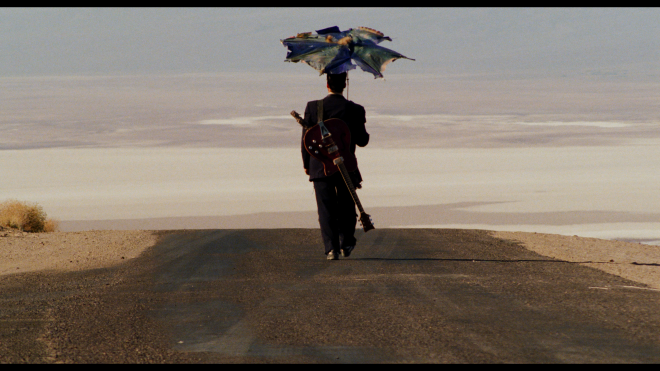 Set in an alternate history where a lone katana-wielding guitarist is on a pilgrimage across a desolate, post-apocalyptic America, Six-String Samurai is a hilariously inventive mashup that shrewdly unfolds into a secret Valentine to the evolution of rock 'n' roll. Taking inspiration from various movie genres and tropes, the bonkers action-comedy remains just as fun and wildly entertaining as the first time watching during a local film festival twenty-three years ago. The cult-favorite puts on an excellent show on Ultra HD equipped with an outstanding 4K HDR10 presentation and a fantastic DTS-HD Master Audio soundtrack. With a treasure trove of new bonuses and a booklet housed inside a beautiful magnet clasp box, the deluxe limited edition package is a recommended addition to the cult library.