The Bird with the Crystal Plumage - 4K Ultra HD Blu-ray

Mixing the psychosexual thriller elements with the conventional whodunnit plot, Dario Argento's The Bird with the Crystal Plumage remains a terrifically satisfying giallo that toys with our expectations to deliver a genuinely effective revelation. Courtesy of Arrow Video, the cult classic thriller stalks the streets of 4K Ultra HD as a single-disc collector's package, featuring a satisfyingly beautiful Dolby Vision video, a fantastic pair of DTS-HD mono tracks but porting over the same set of supplements as before. Nevertheless, this latest edition that includes other goodies makes for a Recommended addition to the UHD cult library.

An American writer while vacationing in Rome becomes a witness to attempted murder in The Bird with the Crystal Plumage, a terrifically satisfying Italian mystery thriller that quickly sucks viewers into solving the case along with the story's protagonist. From legendary filmmaker Dario Argento, the giallo classic admittedly follows the customary, trademark formula that has become a staple of the subgenre. At first glance, it may even feel far too conventional to be memorable or worthy of the praise it's garnered over the last five decades. However, Argento, in his directorial debut, nonetheless turns a familiar plot, which takes inspiration from Fredric Brown's pulp novel The Screaming Mimi, into an engaging cat-and-mouse mystery that effectively toys with our expectations. All the while, he displays many of the creative visuals that would eventually become his signature style.

In the opening murder scene, for example, Argento skillfully draws in his audience in the simplest of ways while also slyly injecting some commentary about the film medium and its depiction of violence. When trapped inside the unusual entrance of an art gallery, Sam (Tony Musante) is forced to watch helplessly behind a glass wall as a woman (Eva Renzi) bleeds on the floor like one of the many other grotesque exhibits. That entryway is an interestingly shaped triangle, one closely resembling the same anamorphic image on which we're watching this story unfold. Similar to us observing the horrific attack behind a screen unable to do anything or look away, Sam is also a powerless spectator to the violence. This essentially makes him our surrogate in this whodunnit tale involving a string of other killings, hired assassins, prostitutes and an obsession with a bizarre painting of a woman being stabbed. 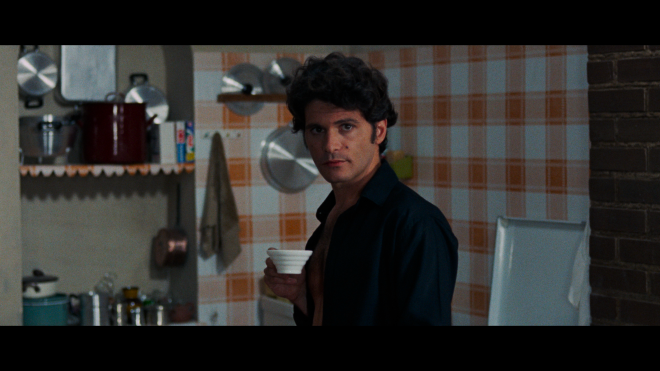 As Sam's interest grows and he turns into an amateur super-sleuth — to the annoyance of his British girlfriend Julia (Suzy Kendall) — we also become as enmeshed in solving the case, wishing to piece the many unrelated clues towards the killer's identity. We are even made to think about the details of the attack, which keep haunting Sam, and question exactly what we remember about the brutal incident. This otherwise banal plot device is brilliantly used not only to further pique our interest but also feeds our conviction that what we saw — a woman in white attacked by a man dressed in black — is the correct one. An oddly generous and charitable Inspector Morosini (Enrico Maria Salerno) gives Sam plenty of liberty and leeway to pursue various suspicions and leads even though the police clearly have the latest technology in crime-solving, like a precursor to forensic science, at their disposal.

In the end, all the computers and fancy gadgets fail where good old-fashioned sleuthing works, and Argento successfully thwarts our assumptions with a genuinely surprising reveal that is arguably ahead of its time. For fans both of the Italian filmmaker and the giallo genre in general, The Bird with the Crystal Plumage displays many of the visual tropes that would become commonplace in the following years, particularly the highly stylized and beautifully elaborate portraits of violence that come across as pieces of art, similar to the painting in the film. Working with acclaimed cinematographer Vittorio Storaro, Argento designs strangely fascinating imagery bathed in ironically flamboyant colors that sharply contrast a character's surroundings, and they are complemented by the tensely haunting music of Ennio Morricone. It's a captivating manipulation of the senses notably demonstrating Argento's craftmanship.

The cult giallo classic takes a stab at Ultra HD, thanks to a new restoration and remaster of the original 35mm 2-perf Techniscope negatives. This HEVC H.265 encode gives fans an excellent upgrade over previous Blu-ray releases although the condition and photographic quality of those negatives bring with them a few minor limitations worth mentioning. Most notably, several moments can stand out as soft and blurry. But again, this is the result of Vittorio Storaro's stylized cinematography, especially since he sometimes alternates between shallow and deep focus on a wide-angle lens in the same scene.

In either case, the resolution quality is consistent in this regard and nonetheless, maintains an excellent level of sharp definition throughout. The stitching and threading in the costumes are very well-defined, and the small blemishes, cracks and pockmarks of the various buildings are distinct. The individual leaves of trees and the hairs of the cast are striking for the most part, and the facial complexions are highly revealing with lifelike textures while also looking healthy with a rosy-peachy tone in the actors. The native 4K transfer is also often bathed in inky, midnight blacks, showing improved gradational differences between the various shades. All the while, the video retains outstanding visibility in the darkest, silkiest shadows, providing the 2.35:1 image with an appreciable depth of field and a lovely cinematic appeal.

On the HDR front, the Dolby Vision presentation offers a subtle and nuanced but nonetheless, noticeably improved step-up in overall contrast balance, making whites appear cleaner and a bit more vivid than its HD predecessors. Specular highlights are particularly dynamic, supplying a crisp, radiant brilliance to metallic objects, such as the killer's shiny knife, while exposing the finer details in the hottest spots, like the many light fixtures. Likewise, primaries are sumptuously rich and full-bodied with the shamrock green of trees looking lively while the many shades of reds are more dramatic and animated, and the nighttime scenes are bathed in an eye-catching range of indigo, cobalt and admiral blues. Secondary hues are also more vibrant, especially the various tones of browns and tans in the clothing and furniture better capturing that unique 70s style while yellows are particularly rich and spirited throughout.

Awash in a fine layer of natural grain, the 4K video of the Argento favorite is the best it has ever looked on any format and has a beautiful film-like quality that fans will absolutely love. (Dolby Vision HDR Video Rating: 82/100) 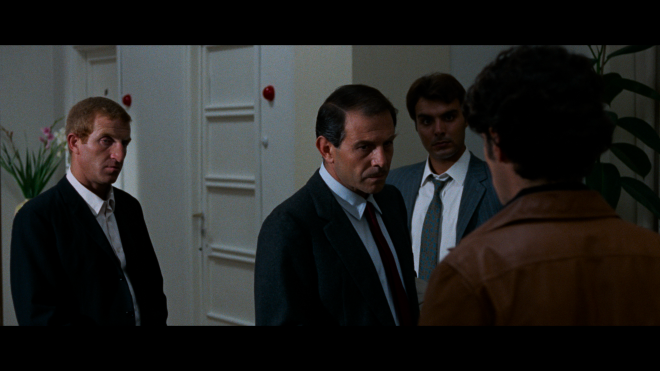 Like the video, the original audio tracks have also been restored and remastered from the same negatives mentioned above, and owners have the choice between two DTS-HD Master Audio mono soundtracks to choose from: the first is in Italian while the second is English.

In either case, fans cannot go wrong with either choice, as both deliver clean separation and excellent distinction in the mid-range, maintaining superb clarity from start to finish. The music of Ennio Morricone is arguably their strongest aspect, displaying outstanding definition and fidelity with a strong, appreciable low-end, providing the visuals with a great sense of presence and weight. Overlooking the occasionally distracting ADR work, dialogue reproduction is also exceptional with precise, intelligible vocals in the center. From time to time, the design can feel a tad flat and too tightly uniform, lacking in some depth, but overall, the lossless mixes make for marvelous additions to the film. (Audio Rating: 78/100) 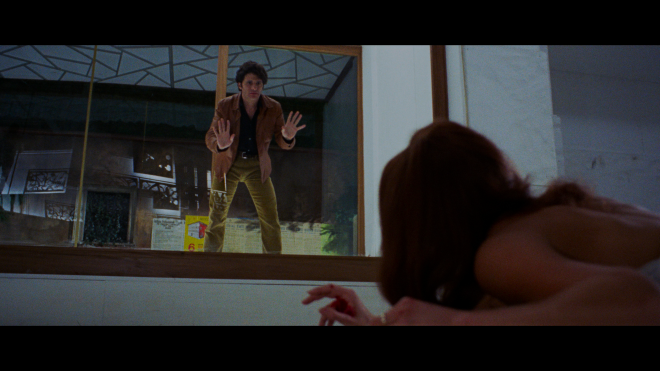 For this UHD edition, Arrow Video ports over the same set of supplements as the previous Blu-ray release. 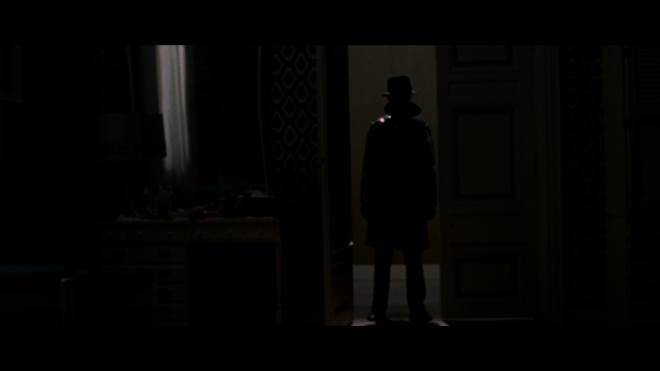 Dario Argento's The Bird with the Crystal Plumage remains a terrifically satisfying Italian mystery thriller that wonderfully captures many of the elements that eventually become staples of the giallo subgenre. Mixing the familiar psychosexual tropes of the genre within the conventional whodunnit plot, the legendary filmmaker in his directorial debut toys with our expectations to deliver a genuinely effective revelation while immersed in a great deal of elaborate beauty and impressive ingenuity.

Courtesy of Arrow Video, the cult classic giallo stalks the streets of 4K Ultra HD as a single-disc Limited Edition collector's package. The Dolby Vision HDR presentation is an impressive and satisfyingly beautiful upgrade over its Blu-ray predecessors, complemented by an equally fantastic pair of DTS-HD MA mono tracks. Although porting over the same set of supplements as before, this latest edition includes an informative booklet, six lobby cards and a folded poster, making the package a recommended addition to the UHD cult library.