After an excellent bogus journey fighting Dracula, Keanu Reeves smashed theater screens with 1994’s Speed. This action-packed thriller was Jan de Bont’s first directorial outing and slung Sandra Bullock into superstardom while letting Dennis Hopper chew some scenery. Finally, this show is getting the home video upgrade it’s long deserved with an excellent native 4K transfer that easily blows up previous home video releases. Add in most of the legacy bonus features and this is an easy upgrade - Highly Recommended.

Hotshot LAPD detective Jack Traven (John Wick) was just doing his job when he and his partner Harry (Jeff Daniels) rescued an elevator of hostages from a mad bomber (Dennis Hopper). They were the heroes of the hour, but when the bomber sets another trap on a commuter bus where if the vehicle drops below 50 mph, it explodes demanding millions of dollars in ransom. Now Jack must find a way to get on board the bus, rescue the hostages, and stop the maniac once and for all. 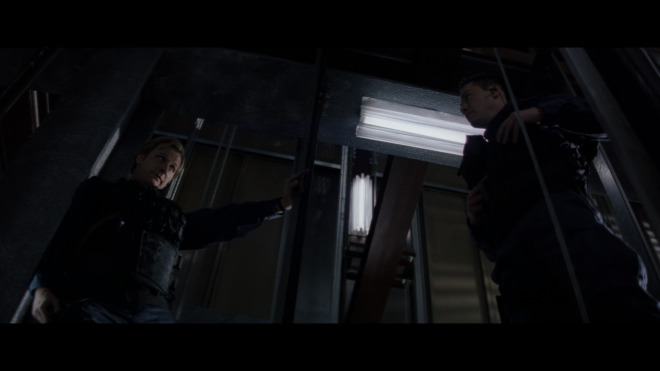 1994 was a hell of a year for going to the movies. I was 12 going on 13 at the time and felt like I was hitting the multiplex or our local rental shop several times a week. The Crow, The Shawshank Redemption, True lies, Ed Wood, Clear and Present Danger, Stargate, Street Fighter, The Professional, Pulp Fiction - the year was stacked with favorites. Speed stands out in my memory not because it was the best of the bunch - it was and still is awesome - but because it was the first movie my sister took me to see after she got her driver’s license. We’re 5-years apart so we had very few opportunities to do that before she left for college. It was a surprise when she offered to haul me off to our local second-run theater because she knew I’d love it. And I did!

While I have a nostalgic love for Speed, I give all credit in the world to Jan de Bont and screenwriter Graham Yost for their excellent execution. The pair crafted an intricate action/thriller that maintains urgency and pace without letting up even when finding places to slow things down for a few character beats. The setpieces build one on top of the next to a thrilling climax largely executed with practical effects and stunt work. Some CGI was employed but remarkably little compared to movies made today. The film is nonstop movement and energy right through to the closing credits.

Headlining the show is a determined Keanu Reeves. While I would call Point Break the better movie, Reeves looks more comfortable in the leading man action hero role with Speed. Dennis Hopper is in his element as the mad bomber largely doing all of his scenes alone talking on a phone. Even without being in the same room with the rest of the cast he often steals the scene. While those two are great, Sandra Bullock was the breakout here. She’d already appeared in great flicks like Love Potion No. 9, Demolition Man, and The Vanishing - but it’s Speed that put her on the map… and why some producer thought she was enough to carry the slogging weight of Speed 2: Cruise Control.

For over 25 years this film has entertained people. It’s a great ride and always reliably entertaining. Even if you cynically go into the movie expecting to pick at its shortcomings, it’s a futile effort once that first elevator bomb goes off. You’re buckled in for the rest of the flick. It’s a tight package that keeps things lean and to the point without overstaying its welcome. If it’s been a while since you last sat down with this one this new 4K UHD Blu-ray is more than reason enough to give Speed another go.

Vital Disc Stats: The 4K Ultra HD Blu-ray
Speed lands on 4K UHD Blu-ray thanks to Disney/20th Century Studios in a two-disc 4K UHD + Blu-ray + Digital copy set. Pressed on a BD-66 disc, the disc is housed in an eco-friendly two-disc case with identical slipcover. The disc loads to the standard Disney language menu before arriving at an animated main menu with traditional navigation options. The included SDR Blu-ray has been remastered offering the new transfer and carries the bulk of the bonus footage. 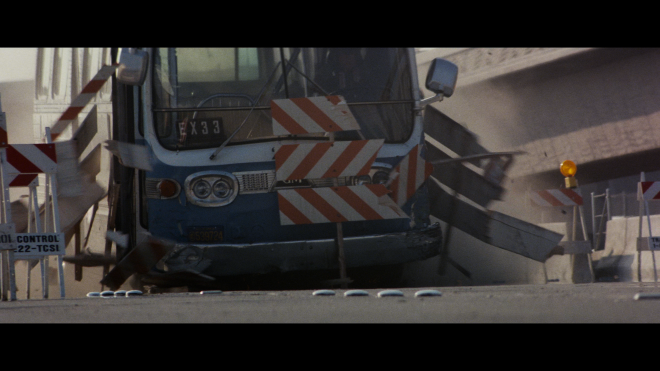 Speed opens up onto 4K UHD Blu-ray with a terrific native 4K transfer. Since the days of LaserDisc, Speed has always been a pretty reliable entry on any new home video format and that tradition lives on with 4K. While the original 2007 Blu-ray was pretty great for its era, this new transfer easily outpaces the old 1080p disc. Small details in clothing, scenery and some makeup effects on Hopper’s hand are much clearer now than before. There are tons of closeups throughout the film and every freckle is on display. A natural grain presence gives the image a welcome film-like presentation.

HDR10 has been judiciously applied to allow primaries and those sun-drenched California orange tones to come to life nicely. Skin tones are healthy and accurate. Primaries get plenty of pop - those blue skies are rich and vivid with yellows and reds coming to life in their own respective ways. The overall color pallet may be a shade darker, but looking at past releases they were a bit too bright so it’s a bit of a split hair. Nothing to get twisted about. 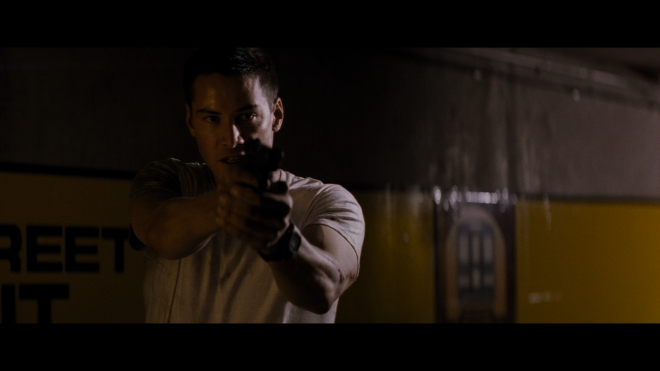 Black levels are strong throughout giving plenty of depth to the image. Contrast has also been kicked nicely giving bright whites that desired spectral quality without any blooming issues. The only iffy spots surround some of the early 90s CGI, the bus jump scene with the CGI gap is a bit hazy compared to the rest of the footage or the building crane crashing down the elevator shaft has a particular weightless quality that only pops more with HDR. Thankfully those are such brief sequences you hardly have time to notice. I did spot a little bit of banding here and there, but nothing severe. Fans of Speed eager for an upgrade should be very happy with this outing. 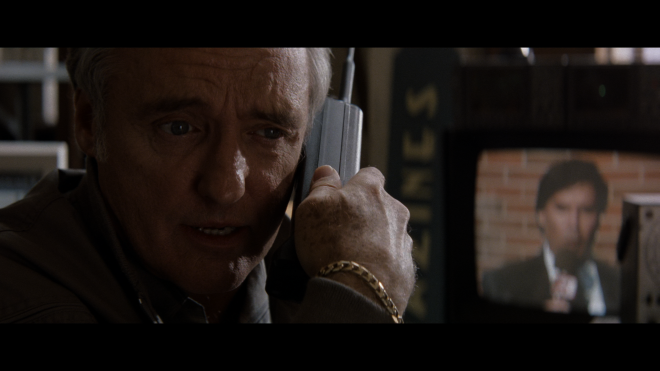 In this day and age of Atmos and DTS:X, it’s a bit of a letdown that Speed wasn’t gifted with a new mix for this 4K UHD Blu-ray release. Apparently Jan de Bont is just fine with the DTS-HD MA 5.1 track that hit with the original Blu-ray. And to be fair, it is a fine mix. It’s still aggressive in all the right places. Explosions handle that heavy rumble with great LFE - this is always a movie I liked to run louder than normal and it never disappoints. It also matrixes nicely to DTS Neural: X if you want to go that route but it’s not necessary to properly enjoy this one.

While nothing new was produced for this release, it’s nice to see Disney/20th Century Studios digging back into the archive and bringing up most of the old bonus features from the old deluxe 5-Star Collection DVD set. I’ve long ago let go of that disc so I don’t remember what’s missing, but the bulk of those materials are here. Best of all the audio commentaries are actually on the 4K disc. It’d probably been the better side of 20 years since I last heard the Jan de Bont commentary so it was a nice refresher.

Speed already had a decent Blu-ray, but that doesn’t mean it didn’t deserve an upgrade. And sure, yeah, there are probably a few dozen other titles in the Fox catalog fans want on 4K - even a couple that haven’t even been released on Blu-ray - but this is a welcome sign. After Home Alone things have been a little quiet from Disney/20th Century Studios so this release and the upcoming drop of Heat is a welcome sign for future releases. Speed remains an action classic and comes to life with a solid new native 4K transfer. Details are sharper and clearer than ever with vivid colors thanks to a judicious HDR10 application. An Atmos mix would have been welcome, but this DTS track still has plenty of impact where it counts creating an immersive surround experience. Toss in the inclusion of most of the classic archival bonus features and you have a worthy upgrade for your collection.