Guy Ritchie’s hilarious gangster crime saga Snatch steals its way to 4K UHD Blu-ray from Sony. Long before he was an action super-star, Jason Statham was a struggling boxing promoter in debt to a whacko who feeds men to pigs while Brad Pitt is a gypsy boxer with a wicked right hook all caught up in a diamond heist with a bunch of fellas willing to kill for a fist-sized diamond. Sony offers a welcome 4K UHD Blu-ray release with a solid native 4K transfer and an engaging atmos mix to match. Recommended

An underground boxing promoter (Jason Statham) and his nieve partner (Stephen Graham), a gypsy boxer (Brad Pitt), a psychotic gangster (Alan Ford), a Russian with an arsenal (Rade Serbedzija), a couple of pawnshop holdup men (Lennie James and Robbie Gee), and a jeweler from New York (Dennis Farina), and a dog with big teeth are all caught up in the heist of a massive diamond - stolen by a guy with a serious gamboling issue (Benicio Del Toro).

Hot off of Lock, Stock, and Two Smoking Barrels, Guy Ritchie was a writer/director who proved he could pull off a highly-stylized ensemble gangster crime comedy. Not content to take things easy with his second project, Snatch takes everything that worked in Ritchie’s first film and cranks up the volume. It’s stylish, loud, crass, violent, bloody, and damn is it funny. 21 years removed from its theatrical release I still hold Snatch as Ritchie’s best film. Not a frame is wasted with a massive cast and intricate character motivations and side stories - everything is tied up at the end in such a way it demands to be rewatched so you can follow every thread.

This isn’t to say that Snatch or even Lock, Stock and Two Smoking Barrels is for everyone. I spoiled a date or two a long time back trying to show this movie to a nice young lady who wanted to watch something funny. First - it’s extremely violent. Even when it’s funny, it’s actually pretty shockingly violent. Second - you can barely understand what half the cast is saying. I’ve never really had a problem following Cockney rhyming. Watch enough 70s Michael Caine movies you figure out how to follow the lingo, but even subtitles aren’t much help in a movie like this. Then you have a lot of story threads. Ritchie usually makes good use of a Mcguffin but there are so many characters all tangentially after this particular item it can be hard for some to sort out. Now for me personally, take all of those aspects that might put someone off of this film and you have every reason I love it saying nothing of the cast. 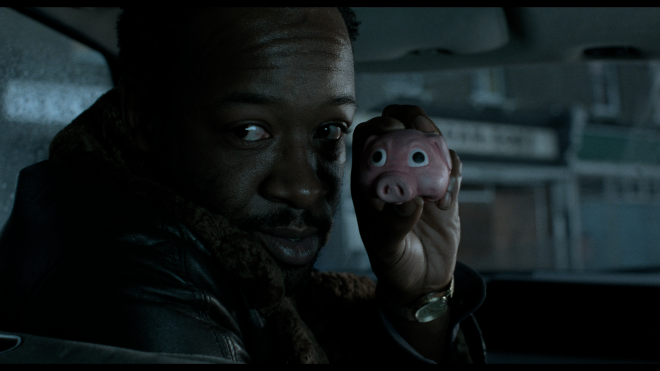 The cast can be a make-or-break deal for any film. Snatch offers up a terrific range of character actors with one particular A-lister stepping out of his Hollywood persona. While he was a motormouth with some great bits in Lock Stock, Statham appears more than comfortable as Turkish peeling off the one-liners with ease. Dennis Farina is an actor who never really got to do much comedy but his hyper-stressed Cousin Avi is a delight. Alan Ford is a nice toothy menace as Brick Top with a pre-Juggernaught Vinnie Jones turning in a fun Bullet-Tooth Tony. Brad Pitt was an odd choice as Mickey but he gives it everything and often steals any scene showing once again when he gets to be in character like 12 Monkeys he's a hell of a lot of fun. Then you have Lennie James and Robbie Gee as a pair of pawnbrokers stuck in the middle of a big mess whose constant bickering offers up plenty of laughs. Toss in a fashion-forward Benecio Del Toro and a downright goofy Rade Serbedzija and you have a lot of talent to appreciate. 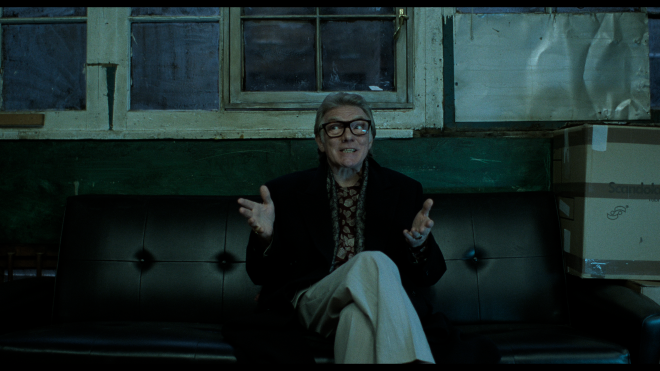 If I have a knock against Snatch it's that it feels too big for its britches at times. And I mean big in every respect - bigger cast with bigger bankable names with a bigger budget financed by a big studio. Some gags - like the twins who repeat everything in sync - just fall flat. It at least doesn't feel tinkered with or as if Ritchie had to compromise his creativity, but you absolutely get the notion that this film is trying to appeal to a much bigger audience at the same time. Lock, Stock and Two Smoking Barrels was a nice neat little independent picture that gets to do a lot with very little and still is a success. In contrast, Snatch feels like it's holding back some of its best punches because a certain set of the international audience might not get the joke - let alone understand what people are saying. I was hoping the U.K. version would fix that up but the only real difference there is the vocalizations of Statham's narration.

When Snatch came out I was working at my local multiplex theater the year before I was about to hit college and seriously thinking about film as a career course. I watched this movie before work, at work, after work, and on my days off when I needed to round out a double feature. I listened to the excellent soundtrack on my way to school. It's one of the movies that made me want to become a writer. I can’t count how many times I’ve seen this movie now but I’ve never tired of it. It’s always held up. From DVD to Blu-ray and now to 4K, I’ve taken a year or two breaks without seeing it, and as soon as Statham’s narration kicks in, I’m right back in it.

Vital Disc Stats: The 4K Ultra HD Blu-ray
Snatch hijacks 4K Ulta HD Blu-ray in a two-disc 4K UHD + Blu-ray + Digital set from Sony. Pressed on a BD-100 disc, the included 1080p Blu-ray is the same disc from 2009 and has not been remastered or updated in any way. The discs are housed in a sturdy snapper black case with identical slipcover artwork. A SteelBook release is also available at Best Buy. The disc loads to a static image main menu. None of the bonus features are included on the 4K disc. 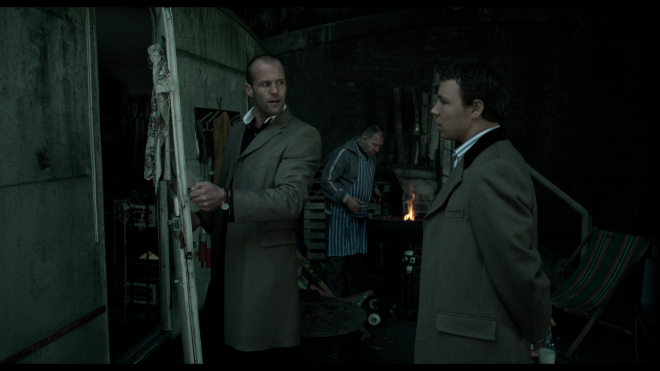 Snatch was never a stunning-looking film, to begin with. The drab gray London scenery with rainy weather and dreary criminal underground locations doesn’t exactly call out “Beautiful colorful imagery!” But that doesn’t mean it doesn’t benefit from a new native 4K transfer with HDR10 grading. The 2009 Blu-ray was pretty good for its era, but it suffered from an inconsistent grain structure and black levels that would struggle with the dark and dreary photography - the Mickey vs Gorgeous George fight being particularly problematic. Speckling was also a pretty frequent companion to that release.

This new 4K ultra HD Blu-ray fixes all of those issues while keeping with Ritchie’s dour color scheme. The opening shots of Turkish and Tommy sitting in a dark shadowy nondescript room highlight the immediate differences. The old 1080p Blu-ray was a bit too bright here, now everything is dark and inky black again with pitch-perfect shadows with that sickly greenish color tone. As follows, the rest of the film maintains that appearance. Even well-lit interiors have a washed-out appearance to them. The grain structure is finely resolved, even in the most stylized moments without becoming too noisy or intrusive maintaining a nice film-like appearance. Fine details in facial features and clothing gain extra refinement with cleaner edges for a nice sharp textured look without the appearance of edge enhancement. 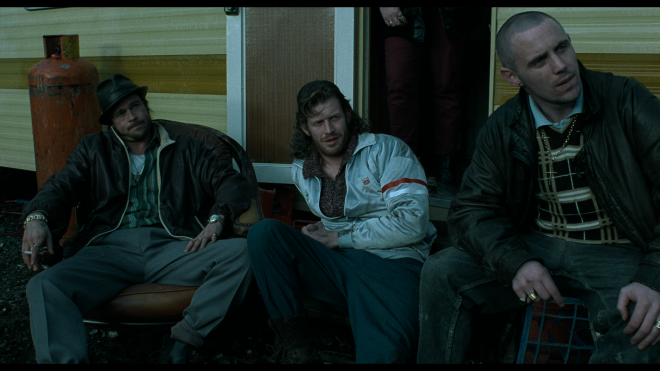 Considering the intended image style of the film, HDR10 doesn’t alter or drastically update colors - everything is in keeping with the original photography so there’s little room for primaries to get much of a punch. Where HDR helps is with the previously mentioned black levels and contrast. This movie loves its harsh lighting dynamics. If a room isn’t steeped in shadows it’s bathed in ghastly greenish fluorescent lights. A scene entering the third act with a devastating fire offers up some fine spectral highlights as do beads of rain on cars and window glass. While there are numerous improvements to be enjoyed, Snatch just isn’t the film you’re going to pull out as a demo disc to show off your 4K rig. It’s a very good disc, but its drab nature really is only going to be appealing to longtime fans that have watched this flick from the DVD era onward.
(88 out of 100) 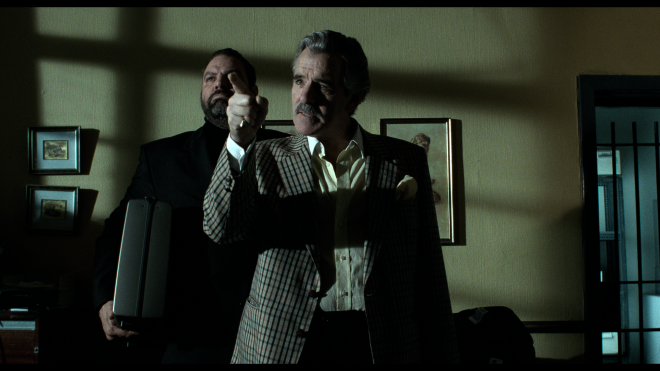 Snatch was always a loud and in-your-face film with a sound design to match. The old DTS-HD MA 5.1 mix stood by that aesthetic and now these new Dolby Atmos Mixes get to crank things up just a little bit. You have two options in that department, the U.S. Atmos mix, and the U.K. Atmos mix. What’s the difference? Nothing much, just Statham’s narration is a little thicker in the U.K. version without the extra enunciation. That’s it. And even then, Statham’s narration is the only element that seems to gain anything with Atmos activating the overheads in a dynamic meaningful way.

Even with some great imaging and some nice sound effect traveling through the channels - the extra Atmos spacing isn’t really utilized. It pops here and there, but nothing consistent to make you go "wow!". The mix doesn’t feel like it was reworked to a degree that sounds all that different. Improved and tweaked a little and rolls nicely, but the included U.S. and U.K. DTS-HD MA 5.1 mixes are still strong contenders.
(90 out of 100) 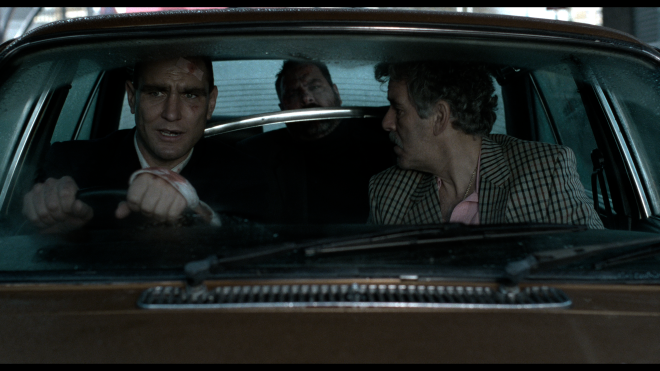 Nothing new to the soup here and more frustrating is none of the bonus features carry over to the 4K disc. Not even the Audio Commentary made it to the 4K disc so you still have to refer back to the old 1080p disc to get all of your bonus content - which was never really that impressive, to begin with. I love that so much of the disc was used for the film transfer and audio, but not having the commentary on the 4K disc is a real pain. It's worth listening to but it sucks a bit that you have to go through the 1080p disc. So much of the extras hinge on that useless BD-JAVA/BDLive nonsense that it’s more trouble than it’s worth - especially since most of those bonus features are holdovers from the Special Edition DVD.

Read our original 2009 Blu-ray review for a full breakdown.

Easily Guy Ritchie’s best film to date, Snatch remains a delightfully pitch-black crime comedy. With a huge cast of colorful characters, Ritchie manages a lot of plot threads and tangents with deft ease giving you more than a few reasons to go back and enjoy the film for multiple viewings. Sony gives Snatch a fitting upgrade to 4K Ultra HD Blu-ray that established fans should appreciate - but the uninitiated may not see or hear what the fuss is all about. The native 4K transfer offers modest appreciable improvements with an Atmos mix that doesn’t blow out your sound system but instead offers some nice subtle tweaks. If you’re a fan looking to upgrade or make a first purchase, it’s certainly a quality disc but maybe not the one to pull out and demo your rig - Recommended.