Raya And The Last Dragon is the latest animated film from Disney that follows a young warrior-princess and her rag-tag team of misfits to save the world and everyone in it with the help of one last dragon. The Asian culture inspirations and the stunning visuals are incredible throughout. The 4K with HDR video presentation is amazing and the Dolby Atmos audio track is something truly special. There are several informative and fun bonus features to boot that round out this 4K+Blu-ray+Digital set. Must-Own. 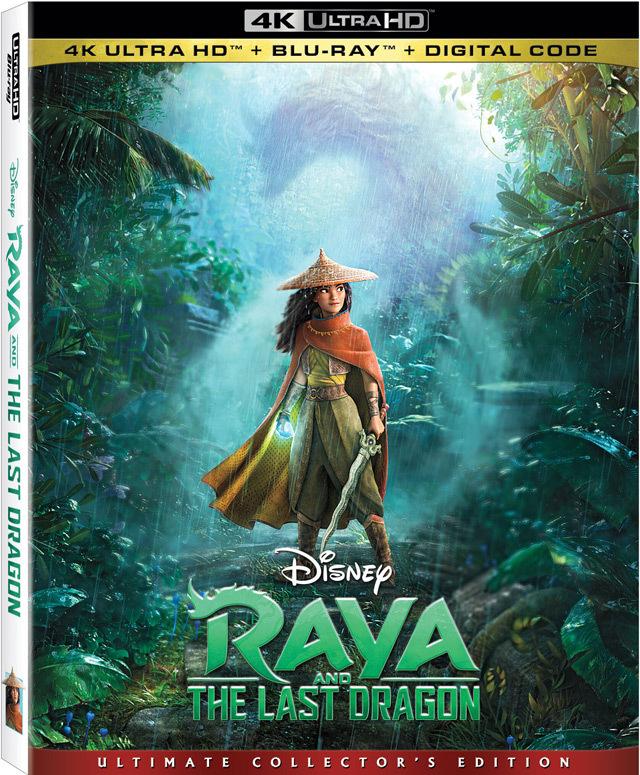 Disney has knocked it clear out of the park yet again with their latest animated feature film, Raya And The Last Dragon, which follows a young girl on a quest to save the world and everyone in it. The film is inspired by Southeast Asian cultures and traditions and employs a diverse cast that is pitch-perfect full of emotion, heart, comedy, and exciting thrills. This is Pixar-level of enjoyment, if not more so as Raya And The Last Dragon incorporates a cavalcade of impressive animated visuals, amazing dialogue, a heart-warming message that is poignant, and some of the best fight choreography ever to be seen in an animated film. It's a must-see.

Directors Don Hall (Moana, Big Hero 6) and Carlos Lopez Estrada (Blindspotting) having crafter a perfect visual masterpiece from Adele Lim's (Crazy Rich Asians) screenplay in Raya The Last Dragon that brings this fantasy adventure film of an epic scope to a more grounded and emotional level that almost instantly forms a bond with its audience. The film follows Raya (Kelly Marie Tran of Star Wars: The Last Jedi), who is a princess of a clan in a fictional Asian-inspired universe. Raya is more of a warrior-ninja than a typical Disney princess, which is a big breath of fresh air. She is stealthier, quicker, and fiercer than almost anything that's come before her. In this world, Raya and her father swore an oath to protect several Dragon gems from intruders and enemies who would want to see their world crumble.

These Dragon Gems were formed when several actual dragons protected the humans from monstrous creatures called un, which is similar to The Nothing in The Neverending Story. This Dragon Gem protects all factions and clans, but each clan is oozing with distrust in one another and has restored to hatred and violence against one another and has broken the Dragon Gem, thus freeing the Druun to start destroying everyone and everything. This is where Raya journeys out to stop the Druun, unite the people, and save humanity as she meets several quirky characters along the way because, of course, this is a Disney movie and what would a Disney movie be without some lovable quirky characters?

As Raya explores new villages and clans, the attention to detail of the differentiating climates and landscapes is otherworldly and simply remarkable. Each location is visually stunning with that added realistic element of the Southeast Asian culture, which is very beautiful. Additionally, this story could have easily been convoluted and complex with its many clans and characters, but Lim's precise storytelling keeps it easy to follow as Raya herself struggles with trust issues as she comes across a giant, mean-looking warrior and an infant thieving baby with a band of monkeys who all help her out in her cause. She learns not to judge a book by its cover and take that first leap of faith in trusting someone else, which is one of the central themes of the film, and it's executed perfectly. Nothing feels forced here with its message, but rather has an organic and natural flow to it, which is something Disney has been lacking in the past.

Another truly amazing element to Raya And The Last Dragon is its fight sequences and choreography, which is unparalleled in the animated world. This is by far the best-looking and coolest fight scenes in an animated movie thus far and has remnants of The Raid incorporated into them. It's that good. The fluid animation combined with the direction is an unstoppable force of excellence. James Newton Howard's score is fantastic and adds the Asian cultural influence into each note for a completely satisfying theme. The voice cast shines with Tran and Awkwafina (The Farewell) as The Last Dragon Sisu driving all the emotion to home plate. Raya And The Last Dragon is phenomenal on all levels and every animated film should strive for this type of achievement.

Raya And The Last Dragon adventures itself to a 4K+Blu-ray+Digital set courtesy of Disney. The two discs are housed in a hard, black plastic case with a cardboard sleeve that features the artwork of the film, including Raya standing inside the forest with a dragon silhouette. There is an insert for the digital code and Disney promos. 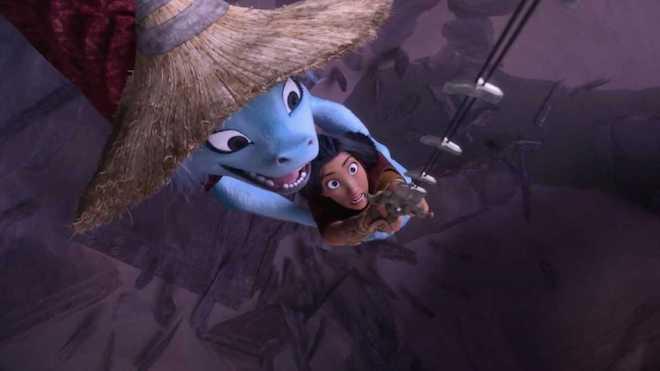 Raya And The Last Dragon soars to a magnificent-looking 2160p UHD transfer with HDR in a 2.39:1 aspect ratio from Disney with a fantastic-looking video transfer that illuminates the finer animated textures and impressive color palette.

The colors are simply beautiful in every single landscape. The earthy tones of delicious blue oceans and green grass blades look excellent, which mixes well with the many browns and tans in the wooden structures and silver stone castles along the way. These natural elements look great with the more fantasy-driven colors of celestial whites in Sisu the Dragon. Even Raya's red cloak is intense in each lighting condition, bring out this vibrant shade of red that looks amazing. The HDR really enhances all these colors and that gives way to a more nuanced color spectrum with varying shades of whites, blues, and greens. The antagonistic Druun have wonderful shades of electric purples as they slide through each countryside and city, which always reveals many shades of purple and black that decays the bright colors. It's quite amazing really. Black levels are deep and inky in the shadowy sequences, which are never murky or too dark.

The detail is exquisitely sharp for an animated film, revealing individual hairs on Sisu the Dragon, as well as the textures of her face. The wardrobe and boats Raya and her rag-tag group use all have the necessary detail in the wood and stone as well. The wider shots of trees, mountains, weapons, and even the water have some vivid detail as well, which shows up nicely with the HDR color enhancement. Even darker scenes with the Druun reveal all the destruction they have caused. The way Raya and Sisu's hair blows in the wind really allows the detail to shine as it brushes across their faces. This is a lovely-looking image from Disney and has zero video problems to speak of, looking spectacular in 4K with smooth and fluid animation. 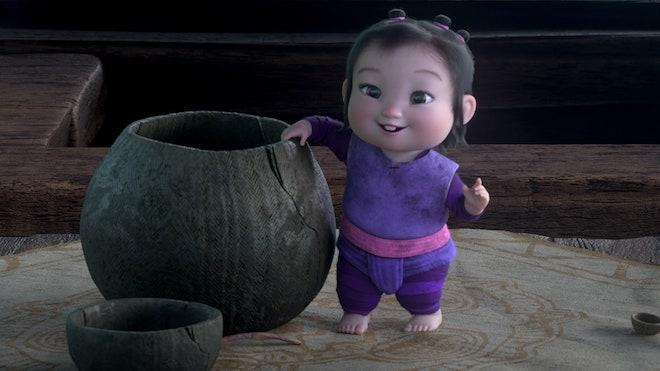 This release comes with an equally impressive Dolby Atmos track that starts off strong and never lets up. And again, Disney must have fixed the volume issue they had with numerous past releases where the volume had to be adjusted up to a normal listening volume.

That's not the case with this release. The sound effects are numerous and abundant, always coming in with a loud and robust sound, whether it be swords clanking together, the mystical sounds of Sisu, or even the dreaded Druun and the monstrous tones. The sound effects come through the surround speakers with a more intense volume during the big action scenes, such as when Raya meets a young baby and its furry friends as they swing for the fences in their village.

The climactic battle scene doesn't disappoint either with a fully immersive sound design that navigates through fighting techniques, swordplay, dragons, mystical powers, and other natural elements, along with voices screaming in battle. The height speakers are almost always in play with raindrops falling, wind blowing, and other people talking from high above, not to mention the Druun attacks that fully engulf the soundscape. The score by James Newton Howard is fantastic and always adds to the mysterious word that has been created and the dialogue is always crystal clear and easy to follow with zero audio issues. 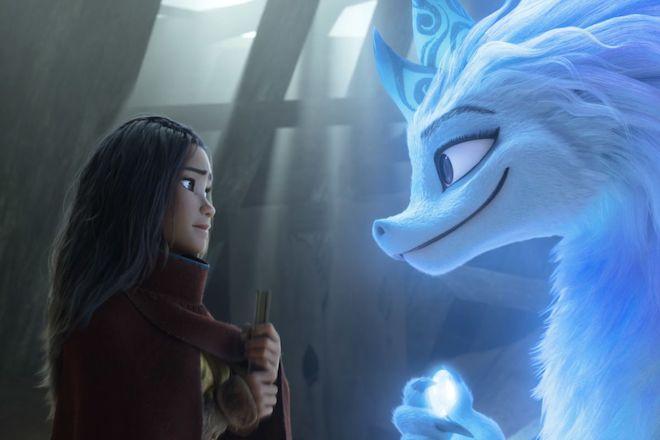 There are about 91 minutes of bonus features, including the amazing short film before the film in its entirety, cast and crew talking about the making of the film virtually, deleted scenes, outtakes, and more.

Raya And The Last Dragon is one of the best Disney animated films of recent memory. Its visuals, story, characters, comedy, emotion, and musical score are simply phenomenal. The message behind the beautiful animation along with its inclusion of the Southeast Asia community is powerful and wonderful, plus it has some amazing dragons. Disney's 4K  with HDR video presentation is top-notch and its Dolby Atmos package is exciting and the epitome of excellence. There are quite a few worthwhile extras as well. MUST-OWN!