George Roy Hill’s multi-Oscar-winning tribute to the 1930s The Sting is no con on 4K Ultra HD Blu-ray. Starring Robert Redford and Paul Newman, this classic cinematic caper is just as entertaining as the day it hit theaters nearly 50 years ago. Universal has issued a respectable native 4K HDR10 transfer offering notable improvements over previous releases. The same audio mix and collection of bonus features have been ported over. Recommended

Note: Images are sourced from the included 1080p Blu-ray. When possible we'll update this review with images from the 4K disc and include a comparison video.

Small-time grifter Johnny Hooker (Robert Redford) and his partner Luther (Robert Earl Jones) just cut into a mark for a quick $10,000. Unfortunately, the mark worked for notorious gangster Doyle Lonnegan (Robert Shaw) - a man who doesn’t take kindly to anyone digging into his rackets. When Luther is murdered, Hooker turns to the infamous Henry Gondorff (Paul Newman) to teach him the big con and get his revenge. Only to get the goods on Lonnegan, they’re going to need an army of the best conmen in the business running the most elaborate scheme imagined. 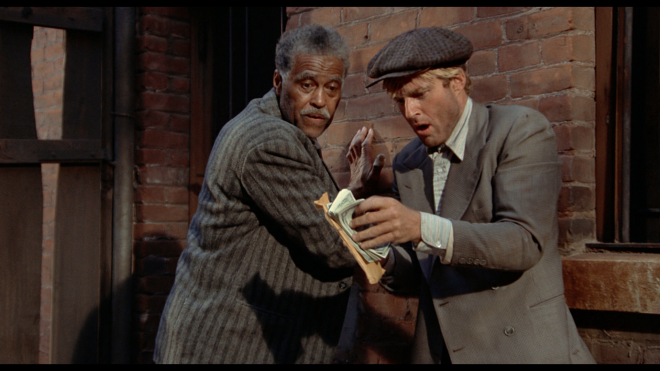 The Sting is classic Hollywood filmmaking through and through. Director George Roy Hill aims to recapture the glory days of 1930s Hollywood - if he’d had it his way the film would have been in black and white in academy ratio but Universal bosses nixed that. What we get is a classy show made with impeccable attention to detail with a smart script by Davis S. Ward, photography by Robert Surtees, costumes by the legendary Edith Head, tight editing by William Reynolds, and impressive art and set design by Henry Bumstead and James W. Payne.

This is a case where I wish the Academy Awards had a “Best Ensemble Cast” category. Don’t make any mistake, this is Paul Newman and Robert Redford’s show but like the big con, everyone in this movie pulls their weight to make this film work. One weak link and it crumbles. We get to enjoy excellent character-driven performances from Robert Shaw, Harold Gould, Ray Walston, Eileen Brennan, Charles Durning, and Jack Kehoe amongst numerous others. Even the smallest side characters get a moment to shine. This is a film that loves its actors.

Con movies or “criminals as heroes” movies are a dime a dozen, but few actually work, and even less are memorable efforts. I feel the reason The Sting stands out as the true granddaddy of the conman movies is that it knows what to show the audience and what to hide. It gives you little moments like Gondorff displaying his card tricks - but it holds back how he stacks the deck so there’s a surprise for the audience. We don’t need to see the how to enjoy the outcome.

It’s a balancing act some movies just don’t know how to work. 2001’s Oceans 11 is a good modern example of knowing how to tease the audience but hold back enough to surprise everyone. 2003’s Confidence - which is basically a remake of The Sting - didn't nail that balance. It tried to with some 4th wall-breaking narration but the final reveal doesn’t hold up. It’s all flash and distraction becoming a big trick by the end. But The Sting nails it with style - and a terrific Scott Joplin adapted score by Marvin Hamlisch.

I’ve loved The Sting since the first viewing. It’s one of my deserted island movies that no matter how many times I see it, I never get tired of it. I can come into it at any time and find myself stuck until the final play. Ideally, you want to catch it from the beginning, but it’s an infectious movie where every minute is pitch-perfect entertainment. If I’m ever in a bad mood it only takes a few seconds of this show to crack a smile.

As 1974’s Best Picture winner, it’s a deserved accolade, but even I have to admit it was a stacked year - The Exorcist, American Graffiti, and Cries and Whispers all deserved the big win. While I love those three amazing movies, The Sting is one of my absolute favorites so I'll still give it the edge. If you’ve somehow never seen this one or it’s been a few years since your last viewing, it’s time to give it a watch.

Vital Disc Stats: The 4K Ultra HD Blu-ray
The Sting plays the big game for 4K Ultra HD Blu-ray with a two-disc set from Universal Home Entertainment. Pressed on a BD-100 disc, the discs are housed in a two-disc black case with an identical slipcover. The included Blu-ray is the same disc issued in 2012 and has not been remastered. The 4K disc loads to a static image main menu with traditional navigation options. 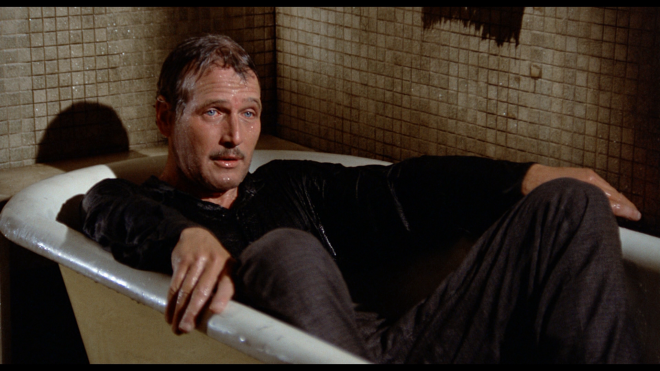 The Sting has had a rough run on home video dating back to the DVD days. With the very purposeful cinematography to give the film a soft-focus aged look while replicating old-time transitions, there are a lot of in-camera photographic tricks that don’t lend themselves to high-resolution scrutiny. Past releases slathered on edge enhancement and DNR with mixed-to-terrible results. This new transfer is a massive leap forward but is still held back from being a full-on demo-worthy disc.

For this new native 4K 2160p 1.85:1 transfer with HDR10, I’m very pleased to report that Universal has largely walked back the DNR and the edge enhancement for a much-improved video presentation. I suspect some slight DNR remains, but it’s not nearly as apparent as the Blu-ray. Again because of the soft photography some scenes will always look the way they do - but so much of this film looks amazing it’s difficult not to commend Universal’s restoration team for the effort. When Hooker and Luther are doing their opening grift, the improvement in details, grain structure, colors, black levels, and contrast are immediately apparent and that carries through the rest of the film.

Grain can fluctuate from fine and well resolved to rather thick (especially if a shot was optically zoomed) - but it looks organic and natural. The montage of Gondorff recruiting his key players is an example of this fluctuating grain, but compared to the Blu-ray - there isn’t any obvious smeary DNR in play. Those odd shots where faces are out of focus but everything else is crystal clear is still there - but they’ve always been there since DVD so I’m guessing that’s cooked into the original photography.

With a smart HDR10 application, colors pop beautifully. Hooker’s blue shirt, Doyle’s yellow sweater when he’s golfing, the horses on the carousel - all have lovely primary pop. This is nice because this is a pretty damn drab-looking movie by design. Past releases were overly bright and whites could bloom terribly and colors could skew. I always felt reds in the old Blu-ray were too pink but now they’re a nice true crimson color. Skin tones are much more natural-looking now. Black levels are strong giving the image some impressive depth. Some of the dark night shots are still on the thick side but don’t look nearly as crushed. Whites are bold and crisp - the walls of the wire shop are impressively bold. I did detect a little aliasing early on with the suit Hooker was wearing and the mark during the opening grift, but nothing notable or serious afterward.

This is one of those releases where you have to check expectations just a little. At nearly 50 years old, it’s not a pristine brand new film and was made to look a certain way using specific photographic techniques at the time. While I wouldn’t pull this out as a demo example of what 4K can do for a catalog release, I’m still very pleased with the results. I’ve been looking forward to this for a long time and after watching it through nearly three times in the last couple of days I’m more and more impressed with this transfer. On a hundred scale I’m giving it an 87/100 or a strong B+ if you’re into letter grades. 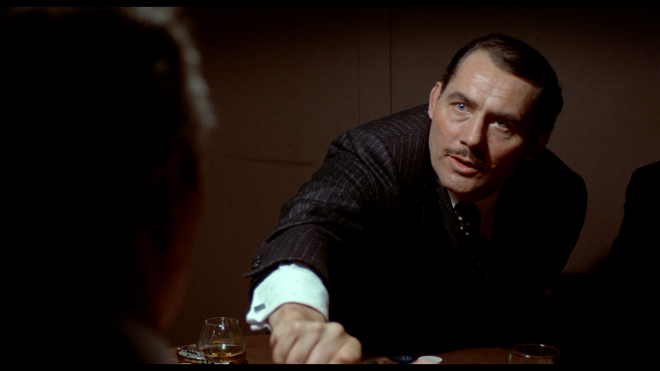 Universal evidently didn’t feel the need to return to the well for The Sting as they did with Psycho or other classic catalog titles to offer up either a new DTS:X mix or include original Mono track. We’re getting the same DTS-HD MA 5.1 track of the previous Blu-ray - and that isn’t a bad thing necessarily in my opinion. There’s actually a welcome surround presence for much of the film so those extra channels get some use and nothing sounds overworked or inauthentic. The only thing I knock this track for is that it’s very obvious when they had to ADR some dialog. Hooker definitely is not saying “screwup” when he first meets Gondorff. It may not be the greatest surround mix of all time but it’s still pretty great for what it accomplishes. 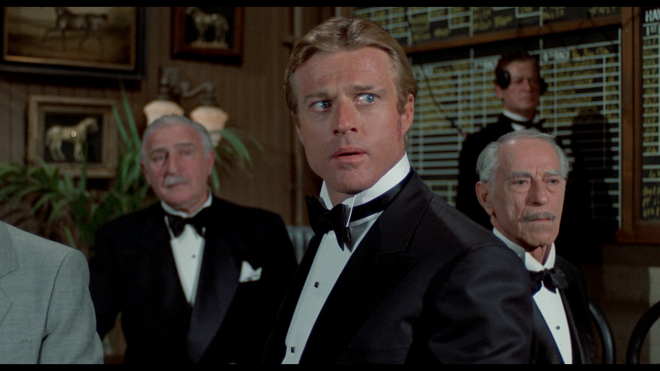 Nothing new has been added to the soup here. We’re getting the exact same set of supplements that were issued with the 2012 disc - only they’re now included on the 4K disc, so that’s at least something. The best of the bonus features is the vintage Art of The Sting three-part feature. Everything else is just old Universal puff stuff and not really related to this film at all. 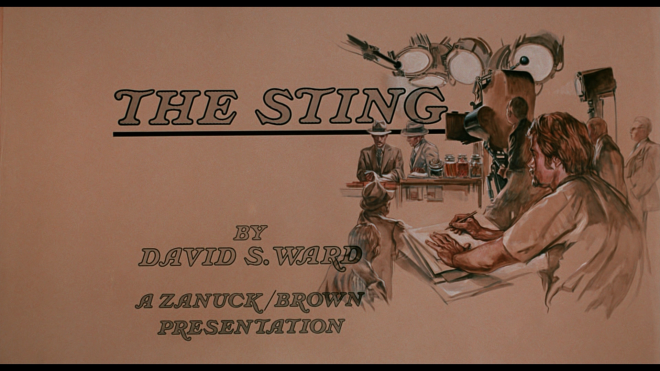 The Sting is a genuine classic in my book. Everything behind the camera and everyone in front clicked to make a piece of grand Hollywood entertainment. Paul Newman and Robert Redford headline a cast of impressive character actors all delivering colorful memorable performances. George Roy Hill directs with gusto turning the art of the con into a thrilling and entertaining ride with style to spare. Top it off with a lovely Scott Joplin infused score and you have what I would call the perfect movie. Nothing’s wasted and nothing’s left for granted.
Universal Studios brings The Sting to 4K Ultra HD with some impressive results. The new native 4K HDR10 transfer while not perfect offers some visual delights with notable improvements over past releases. The DTS-HD MA 5.1 mix is the same as the 2012 disc, but still effective. Bonus features are recycled but worth picking through if you haven’t looked at them. As one of my all-time favorite movies, it’s great to have The Sting on 4K looking this good, it may not be flawless, but after so many rough releases this is a step up. Recommended