Arnold Schwarzenegger, John McTiernan, Shane Black - some of the biggest names in action movies join forces for Last Action Hero. Is it a family-friendly adventure movie? Is it a dark cynical sendup of Hollywood’s favorite blockbuster genre? It’s all of the above - and not always great at either genre but still manages to entertain. After suffering some terrifying home video releases, Last Action Hero earns an impressive native 4K transfer with HDR10 and a robust active Atmos audio mix to match. Toss in some worthwhile bonus features and you have the best release on disc to date. Recommended.

Action nut and Schwarzenegger mega-fan Danny (Austin O’Brien) spends his days ducking school and hanging at an old dilapidated movie house in New York. Thanks to the friendly projectionist Nick (Robert Prosky), Danny gets a never-ending fix to support his addiction. After a rough day, Nick treats young Danny to an advanced screening of the new Schwarzenegger flick Jack Slater IV complete with a “magic ticket” entry ahead of the theater's demolition. Only the ticket is magic and within moments of the first gunfight, Danny is teleported into the explosion-fueled silver screen adventure of his dreams! 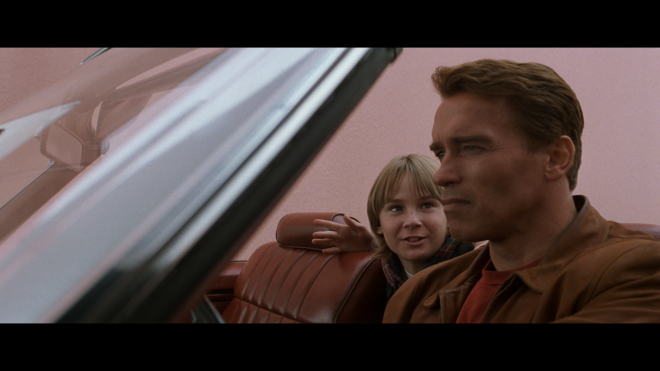 Last Action Hero is one of those perfect storms of mismatched elements. After numerous hits, Schwarzenegger was at the top of his game but looking to soften things and appeal to a younger audience. Action maestro John McTiernan was in peak form coming off of Predator, Die Hard, and The Hunt for Red October. Shane Black was a high-profile action movie screenwriter commanding massive paydays for his work. On paper, these are the elements you want and need for a big high-concept action flick. Unfortunately, this amounted to the perfect storm of too much and not enough. Too many crazy ideas, too much bloat, not enough story focus or heart to make people want to see a very cynical sendup of the genre.

As imperfect as it is, I do have a love for this flick. Studio bosses had the dumbass idea that this would somehow outdo Jurassic Park and opened it one weekend after Spielberg's mega-hit. While that was a catastrophic move - it worked out for me. All screenings of Jurassic Park were sold out for weeks at my local theater and the only movie I could go see was in fact Last Action Hero… and the theater was empty. Eventually, I did get to finally see Jurassic Park but I never forgot Last Action Hero.

And yeah, it’s a mess. I’m the first to admit that it’s not a “great” movie but it’s still a very entertaining one. Through its numerous faults with tone and story and pacing, it finds an energy, and thanks to Schwarzenegger’s hyper-aware performance it succeeds more than it fails. The main issue with this film is it just doesn’t know what it is. Is it a PG kid-friendly movie like Kindergarten Cop? Or is it an R-rated action spoof the likes of Raw Deal meets Blazing Saddles? It’s, unfortunately, trying to be both at the same time and it doesn’t always work. You can feel McTiernan struggling with the playful comedy elements while Shane Black and David Arnott (among numerous other writers) struggles with farcical jabs at the action genre. 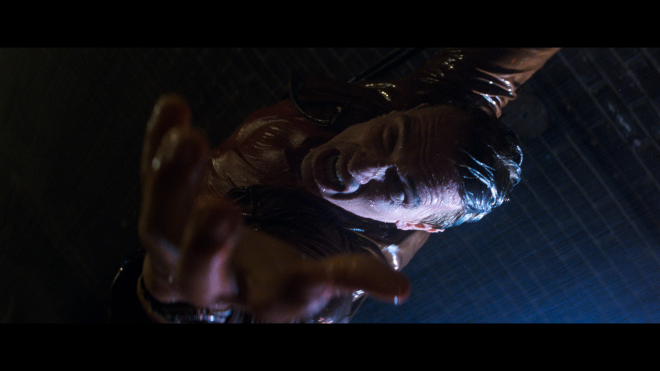 But it is a fun movie and that's largely thanks to the cast. Schwarzenegger is the perfect sendup of his own big-screen persona. Austin O’Brien was given the thankless task of trying to be the likable spunky kid while also being the constant source of exposition. Charles Dance delivers another impressively creepy villain and it’s clear he was having a lot of fun. Then we have Tom Noonan going above and beyond as The Ripper and stealing every scene he’s in. Add an army of cameos and you have a cast that’s doing the best they can with the material they’ve got to work with.

Last Action Hero is a movie that’s often best remembered for its notable box office failure than what it has to offer. It's certainly not remembered for the NES game.  I’m under no nostalgic delusion that this is an underappreciated masterpiece, but it’s not the complete disaster it’s often pegged to be. It’s fun, it’s got a lot working for it, and it’s genuinely pretty damn funny! A little bloated, a little messy, but it’s entertaining and that’s what matters.

Vital Disc Stats: The 4K Ultra HD Blu-ray
Last Action Hero explodes onto 4K Ultra HD Blu-ray with an excellent 2-disc 4K UHD + Blu-ray + Digital SteelBook release from Sony. Pressed on a BD-100 disc, the discs rest nicely in a foil-embossed SteelBook that replicates the iconic movie poster. The 4K disc loads to a static image main menu with traditional navigation options. The included Blu-ray has not been remastered. All of the bonus features are on the 4K disc. 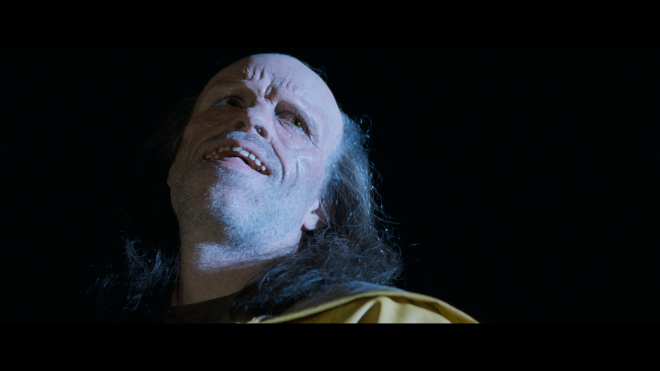 Last Action Hero has always had a pretty rough-to-terrible life on DVD and Blu-ray. Considering the film’s blockbuster bust, it just wasn’t a title Sony ever took much time or care with so it’s nice to see them go the distance with this new native 4K 2160p 2.39:1 transfer with HDR10. This movie has never looked better.

From the first moments, details are vastly improved over the previous Blu-rays. The first Sony-issued Blu-ray was alright in this department, not great, but okay. The Mill Creek disc was a muddy disaster and this new 4K presentation easily punches both of them off the shelf. Facial features, clothing design, production design all are on display. The contrast of the movie world versus the grim and dirty real world is much more appreciable with the small little details I felt like I was seeing bits and pieces I’d never noticed before. Film grain throughout is stable and organic for a nice film-like presentation. There are a couple of odd optically zoomed-in shots where grain can be incredibly thick and fine details become a bit crunchy - the tracking shot of Nick giving Danny the magic ticket is a notable example - but those are relatively few moments. 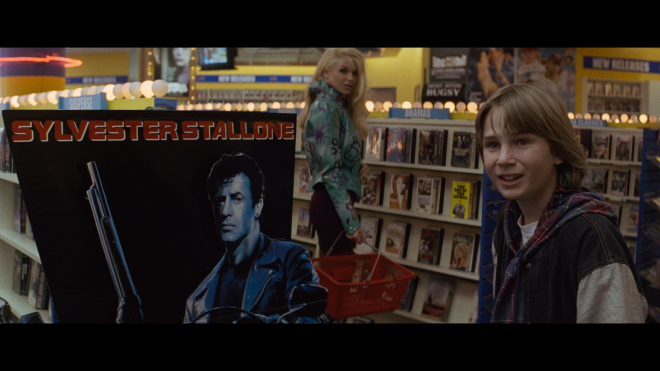 Colors, black levels, and contrast all enjoy improvements with a judicious HDR10 application. This isn’t blown out nor is it overly dark. It highlights the bold primaries, deep blacks, and crisp whites in nice ways. Skin tones are healthy throughout. Reds are deep and crimson with blue skies looking rich. Whites are crisp without blooming and black levels are deep and inky giving the image a terrific sense of depth. There are still a few problem areas, shots that always looked rough or out of place still look pretty bad. The wide shot of Jack Slater and Danny hanging on the roof towards the end still looks crushed and muddy. When Danny is about to go back to the real world and leave Jack, the blue screen background still looks off giving the image a crunchy feel. Those fleeting moments where this transfer suffers are the hasty reshoots, they look and feel cheaply executed compared to the accompanying shots. There’s just no fixing those. But those moments amount small nitpicks really for a movie that genuinely looks better than it’s ever looked on home video. 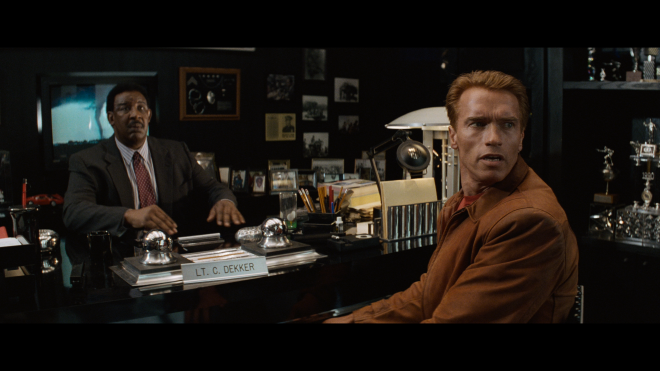 While the video transfer is a notable improvement, the big win here is the Atmos audio mix. Last Action Hero has languished with middling to generally bad audio tracks. The first Sony DTS track was alright, but that Mill Creek Dolby Digital mix was again a disaster. This time around, the surrounds are constantly active. Even in quiet scenes like when Danny finally gets to school in time to watch Hamlet, there’s small surround beats with the other kids in the class that’d never really felt alive. But even in the “movie world” when Anthony Quinn is beating up Art Carney, there are sounds of seagulls that now occupy the overheads and it’s a small subtle effect that’s great. But when the genuine action sequences kick in, it’s an orchestra of surround and overhead effects with nice rumbling LFE to punch it up.

Dialog is clean and clear throughout without any issue. Scoring is on point, Michael Kamen‘s cue for whenever Jack Slater shows up is a delight and gets that appropriate highlight punch in the mix. Levels are strong without the need for extra monitoring - but for the fun of it, I’d recommend popping it up a few extra notches. It’s a fun movie and Atmos works wonders for it. 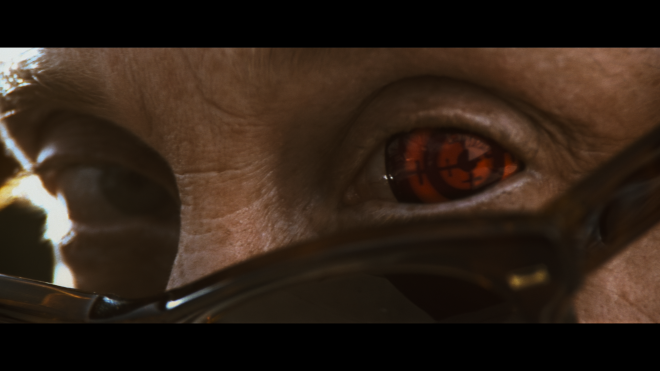 And finally, we actually have some bonus features for Last Action Hero. At the head of the pack is a new audio commentary with John McTiernan. McTiernan commentaries can meander a bit with some dead air, and that’s still true here, but he offers up a ton of insight and info for the film. He’s also very apologetic about the movie wishing he could have done scenes differently and is very frank about the Hollywood bloat that took over this movie as too many fingers got into the pie. After that, we get some deleted scenes, an AC/DC music video, and the original behind-the-scenes featurette. 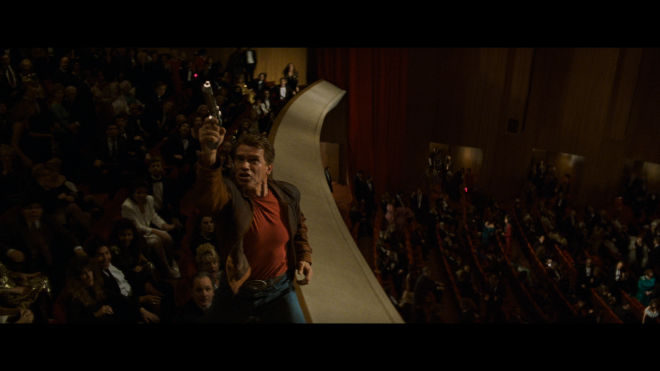 Last Action Hero isn’t often pegged as the best of the best in Schwarzenegger’s catalog of action movie classics. But it’s far from his worst - I’m just not a fan of End of Days and Sabotage just didn’t do anything for me. But Last Action Hero is still a fun show. Messy and disjointed with notable faults, it has a lively energy and the solid cast carries it to the finish line. I had a lot of fun rewatching this after a few years away from it and I'm glad to see that it still holds up nicely.

With a long history of rather crap home video releases, Sony finally does right by giving Last Action Hero an impressive and worthy upgrade to 4K Ultra HD Blu-ray. The HDR10 transfer is the best this movie has ever looked on home video - even if a few odd shots still stand out. The new Atmos mix is engaging and a highlight of the release while the new bonus features package including McTiernan audio commentary are worth picking through complete with a really cool SteelBook case. If you’re a fan, it’s time to make some shelf space. Recommended.