The second film of Park Chan-Wook’s "Vengeance Trilogy” - Oldboy stars Choi Min-sik as a man trying to unravel the mystery of why he was kidnapped and held captive for fifteen years only to be randomly released. A shockingly visceral and often horrifying morality tale, this film hasn’t lost its punch in the 18 years since it was released. Arrow Video gives Oldboy another run on home video with 4K UHD Blu-ray delivering an often impressive transfer with Dolby Vision HDR, solid audio mix, and hours of excellent bonus features. If you still have a strong stomach for this one - it’s Highly Recommended. 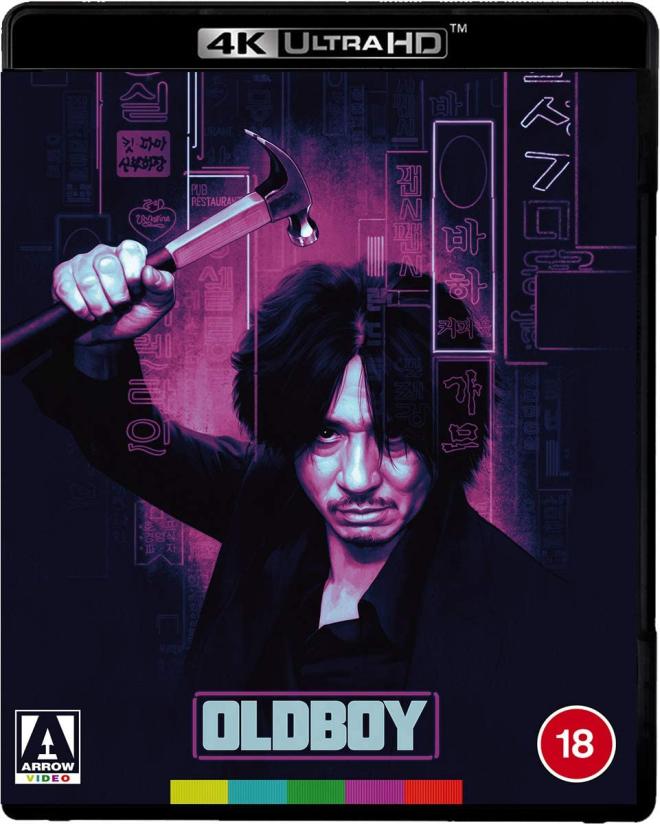 Oh Dae-su (Choi Min-sik) was a drunken buffoon. On the night he should have been home with his family celebrating his daughter's birthday, he was in a police station being processed for drunk and disorderly. While calling home he is kidnapped. After fifteen years of living in a one-room cell, Oh Dae-su is released and teased into figuring out who did this to him and why by a shadowy figure. With the help of the beautiful friendly sushi chef  Mi-do (Kang Hye-jeong), Dae-su will pick apart the mystery one clue at a time to exact his revenge. 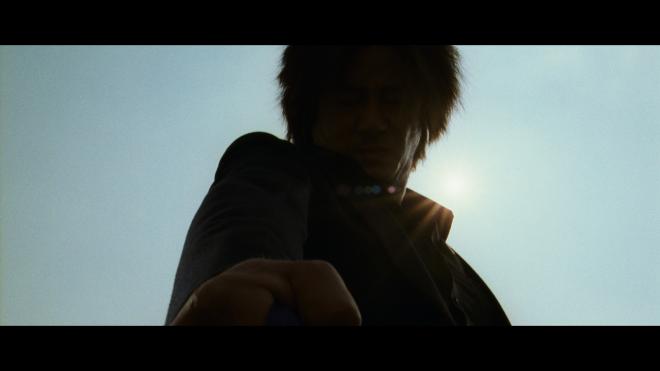 I love a good revenge movie. A spouse or loved one is murdered, a child is kidnapped, a dog is killed and a car is stolen - the wrong must be made right. Whether the protagonist is a schlubby everyman or a trained professional with a particular skill set, you’re buckled in for a tension-fueled violent ride of biblical proportions. Every now and again, a film will make the small attempt at moralizing the journey - “don’t become the monster you hunt,” but rarely is that ever satisfyingly pulled off. Then you have Oldboy.

Park Chan-wook marked his career making revenge films that made the audience very uncomfortable with the concept. Sympathy For Mr. Vengeance, Oldboy, and Lady Vengeance make up a gritty and terrifying little trilogy that examines every facet of the theme. While the other two of the films are a little more straightforward giving the audience some semblance of that gratifying bloodlust, Oldboy is in a league of its own. Loosely based on the Japanese Manga series, our hero is hardly heroic, blurring the lines of who is the actual villain of the film - or if there is actually even a villain at all, just a collection of bad people. There are some moments where this film deftly plays with your expectations giving you the revenge-fueled bloodletting you desire - the hallway fight being the main highlight - but then Park Chan-wook frequently pulls the rug out from under you.

Oh Dae-su was quite frankly a selfish piece of shit when he was kidnapped and when released he’s not much better. Early in his quest, he has a chance to hear a suicidal man’s story and change a life for the better - but walks away. Instead of trying to find his wife or his child, he dives headfirst into the shallow pool of revenge. All of his decisions are with his needs first - never anyone else. Just when you think he might have grown a little, is given a chance to walk away and have a real life, he rejects it. And that’s saying nothing about the last act of the film and the reveal of the architect of Oh Dae-su’s rage. That’s its own set of shocking revelations I won’t go into here for the sake of the uninitiated.

Playing front and center is a tremendous turn from Choi Min-sik as Oh Dae-su. We watch him turn from drunken idiot to desperate tortured captive to dedicated and determined warrior. His opposite is Yoo Ji-tae as the powerful yuppie Lee Woo-jin with. He’s accounted for every possibility, every variable to Dae-su’s journey. He’s always in control moving from what appears to be cocky and obnoxious self-confidence to terrifyingly measured and sure of every outcome. Caught in the middle is a delightfully innocent turn from Kang Hye-jeong as Mi-do.

Ever since Oldboy hit theaters in 2003, it left its mark on the revenge genre. Some early critics leveled the knock that it's little more than a violent B-movie with a budget, but that's a gross oversimplification. The violence is jarring, but it's never the focus, and those who fail to see past that aspect miss the big picture this film paints.  There have been dozens of imitations including an ill-fated and heavily chopped remake by Spike Lee and none of them rise to the same level of intensity. Park Chan-wook’s masterpiece is an emotional rollercoaster. One moment you’re gleefully enjoying the bloody tracks left by our hero, the next you’re horrified by the dramatic character turns and revelations. It’s not an easy film, but it’s essential in the revenge thriller genre.

Oldboy attacks 4K Ultra HD Blu-ray with a two-disc set from Arrow Video. The main film is pressed on a format standard Region Free BD-100 disc with additional bonus features pressed on a Region B-locked BD-50 disc. Included is a 42-page booklet containing images, transfer information, and new and archival essays and articles about the film. For the standard release, there is reversible insert case artwork. For this review, we looked at the Zavvi Exclusive SteelBook which offered the same discs just with different packaging. 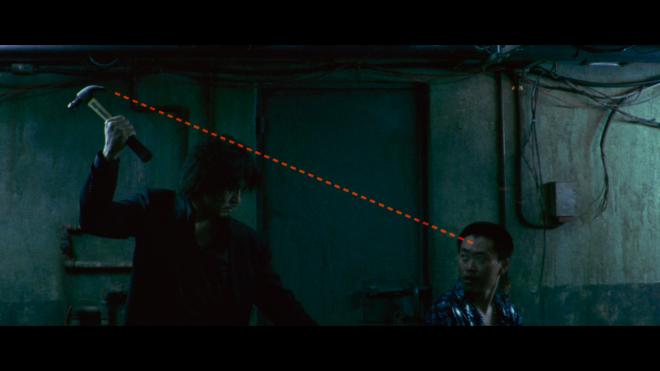 Fresh off a recent restoration effort, Oldboy looks amazing on 4K Ultra HD Blu-ray with Dolby Vision HDR (and HDR10). This movie has always looked rough with some iffy visual effects shots - those CGI ants and elevator scene still look dodgy - but this is light and day better than the 2003 Tartan Blu-ray. I don’t have access to the Arrow special edition Region-B Blu-ray from 2019, I was actually about to give up hope for a domestic release and import it when Arrow announced this 4K set. The included booklet doesn’t indicate the vintage of the transfer but I assume they used the same restoration from their 2019 Blu-ray as the basis for this 4K disc. To that end, I can’t compare the two as Arrow isn’t in the habit of including a 1080p Blu-ray copy with their 4K releases.

For a film where small visual cues and set design elements hold important details about the film, I honestly felt like I was seeing this movie for the first time in a lot of ways. I missed the chance to catch this in theaters when I was a student in Chicago, but me and my roommates devoured the first DVD release. The 2007 Blu-ray was a welcome upgrade to that disc and I feel the same leap in overall improvement is made with this 4K disc. From facial features and costuming to the intricate details of the 7.5 floor room where Oh Dae-su is held captive, there’s a terrific array of fine detail to soak in with this new disc.

In addition to improved details, Dolby Vision HDR refines blacks, whites, and enriches the color pallet with more nuance in light and shadows. The film was always incredibly dark-looking with deep black levels and I’m pleased to see that more detail and improved shadow separation avoid some of the harsher near-crushed blacks of the old disc release. The famous hallway fight felt like it had a lot more image depth than what I’d previously experienced on home video. Whites are also better resolved, especially surrounding the brighter more cheerful-looking flashback sequences.

Colors are lovely and vivid giving plenty of primary pop. With all of the bloodletting red and crimson tones get plenty of attention. Again in darker sequences, there’s more shadow gradience giving color shades more room to roam. The red hotel room where Oh Dae-su and Mi-do hold up is a prime example.

As I mentioned this was always a kind of rough-looking movie in places. Heavily processed shots or visual effects sequences still stand out. CGI is troublesome - those ants never looked good and with the added resolution and HDR grading it only draws more attention to their subpar nature. There are a handful of soft-focus shots that still look oddly parsed into the film or a few shots where image depth suffers, but overall this is a noticeable upgrade over the old Tartan Blu-ray release. 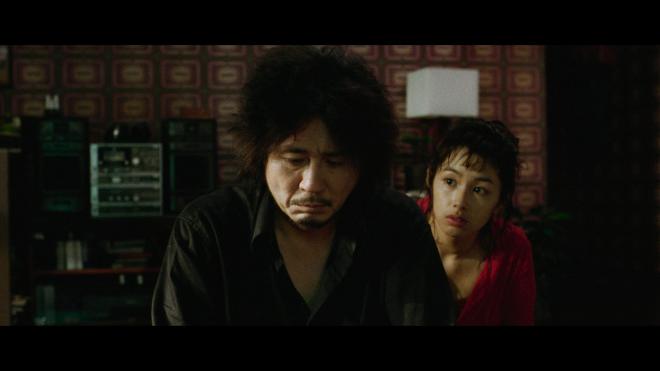 Arrow’s 4K UHD Blu-ray of Oldboy arrives with three audio options, a Korean 5.1 mix, a Korean 2.0 mix both with English subtitles, and an English 5.1 track. I don’t particularly care for dubbed tracks for foreign releases, but I’ll give credit to this English track - it’s not half bad. The voice acting is pretty decent and feels like they fit the respective characters. That said, I’m going for the Korean 5.1 mix as the best way to enjoy this film. Oddly, Arrow didn’t bring over Tartan’s 7.1 mix. This 5.1 track is great, the dialog is clear, sound effects are active and the surround channels deliver an immersive experience. I no longer have the Tartan disc on hand for a direct comparison, I’m trying to locate a copy and will update this section when I can do some more disc flipping. The 2.0 mix is fine, but it’s really only good if you’re using headphones or if you don’t have a full surround setup. It does compress a lot of the elements, it has a kind of stacked quality where the two 5.1 mixes offer some better atmosphere and dimensionality to the soundscape. One note for those purchasing on this side of the pond, the English subs have some alternate spellings we may not be used to - so when you see "arsehole" don’t be too shocked! 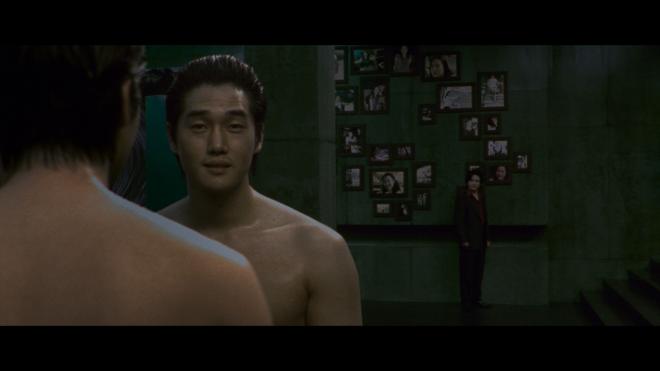 In keeping with Arrow’s usual methodology for delivering terrific bonus features, Oldboy is stacked with new and archival bonus features and materials. On top of four audio commentaries you get deleted scenes, a retrospective documentary, cast and crew interviews - and that’s before you get to the bonus features disc with the feature-length 2016 documentary on top of the extensive video diary of the making of the film. That bonus features disc is Region B-locked so you’ll need to have a region-free player to access those bonuses. If you don’t have a region-free player, you’re still getting the bulk of the best of the extras Arrow cultivated for this release on the actual 4K disc. 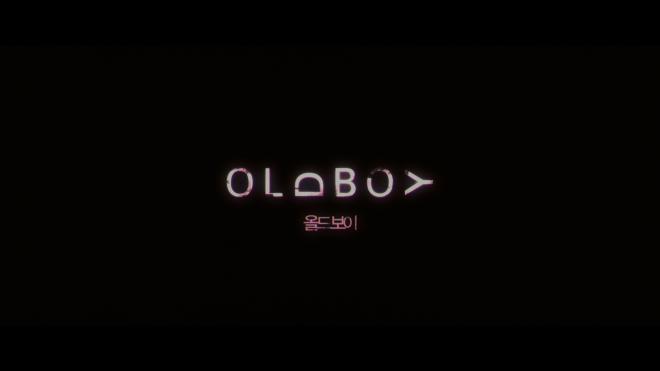 Park Chan-wook’s Oldboy has grown into a full-on cult classic thriller. A loose adaptation of the excellent Manga series, the film follows its own path examining the deadly intricacies of rage and revenge playing with the audience’s expectations and cinematic bloodlust. It’s a hell of a film that deserves multiple viewings to fully digest what it has to offer.

Arrow Video delivers a truly excellent 4K UHD Blu-ray release worth grabbing - especially if you didn’t import their 2019 Blu-ray. This native 4K transfer boasts terrific detail and bold colors with Dolby Vision HDR. You have multiple audio tracks with the better end of fifteen hours of bonus features to pick through. If you’re an Oldboy fan, you have your hands full with this release making a worthy addition to the collection. Highly Recommended