Zack Snyder's Batman v Superman: Dawn of Justice earns a redo in this remastered extended cut of the movie, which includes the IMAX footage in its original aspect ratio and a new color timing. The blockbuster crashes into Ultra HD for the second time with a notably improved 4K presentation and the same reference-quality Dolby Atmos track. With a pair of new bonuses to boot, the single-disc package is Highly Recommended for loyal fans.

One of my favorite aspects in the extended edition of Zack Snyder's Batman v Superman: Dawn of Justice is that it works as an evenly-tempered and thoughtful sequel to his own Man of Steel. The plot is a direct response to Superman's massively destructive battle against General Zod to save Earth from extinction, and Batman's outrage slowly evolving into acerbic hatred is at the forefront fueling this adaptation. It dwells in the aftermath of unimaginable devastation, a society still reeling from the thousands of lives lost as the U.S. government still feels vulnerable and fearful of another future attack while simultaneously demanding an all-powerfully benevolent and supposedly all-just alien creature answer for the chaos.

For both the country and the world, this problem of extraterrestrial beings with God-like powers who could potentially install themselves as tyrannical rulers or annihilate the entire planet on a whim creates a major existential crisis. While this is most evident in Batman, this is nonetheless true for everyone, particularly in the case of Lex Luthor, whose role in this story is now better understood and comes with more depth. The tech-giant genius has been slowly unraveling in the five years since Superman's catastrophic reveal, clearly struggling with the idea of an all-powerful individual being equally good and righteous when an abusive father has already proven otherwise. 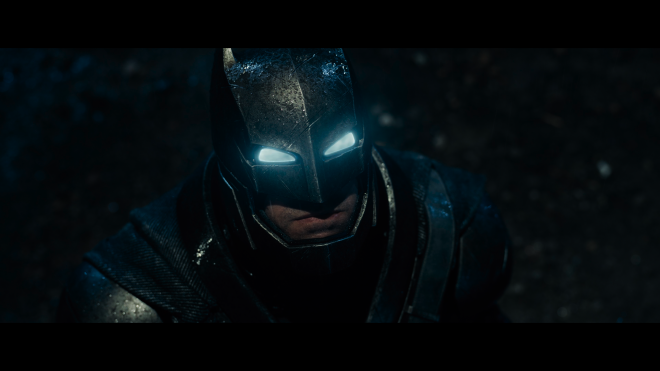 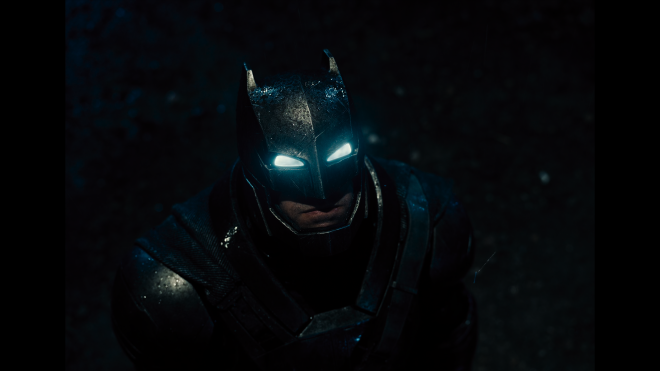 Lex Luthor is like Alexander the Great wielding his sword — be it through a public smear campaign, Batman or Doomsday — at the Gordian knot, which is Superman. Bruce and Diana's brief discussion on the forgery is a slyly clever metaphor for Lex's hidden agenda.

For a more in-depth take on the film, check out our review of the 2016 Ultra HD HERE.

Warner Home Video brings Batman v Superman: Dawn of Justice to 4K Ultra HD Blu-ray as a standalone, single-disc edition, dubbed the 'Ultimate Edition (Remastered).' A Digital Copy code is also included, which unlocks a 4K Ultra HD version in Dolby Vision with Dolby Atmos audio on various platforms. The triple-layered UHD100 disc is housed inside the standard black, eco-elite keepcase. At startup, the disc goes straight to a static main menu screen with the usual options along the bottom and music playing in the background. 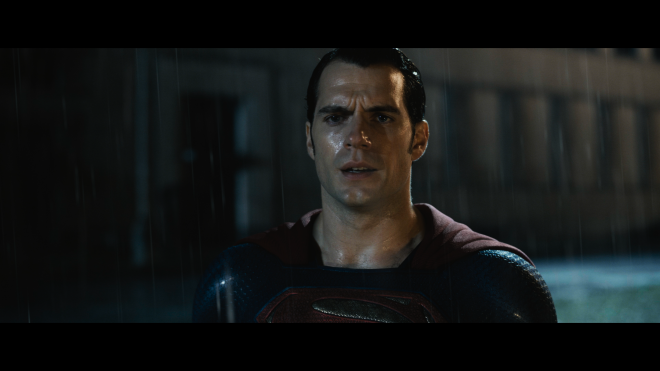 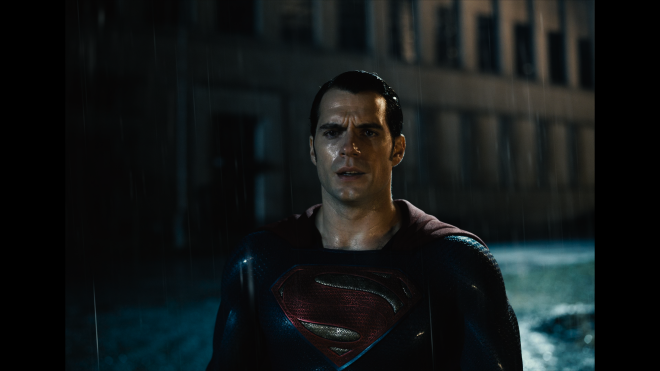 To complement Zack Snyder's Justice League release, Warner Bros has granted the director the rare opportunity to revisit and restore Batman v Superman to its original intended vision, which includes the IMAX footage in their full 1.43:1 aspect ratio. Reportedly given access to the original 4K digital intermediate and the IMAX 70mm elements, Snyder was also allowed to adjust the color grading and make a brand-new master from which to make this HEVC H.265 encode. Although the biggest and most noteworthy differences will undoubtedly be in the new footage, the end result overall is a surprisingly satisfying improvement over its 2016 Ultra HD counterpart, making this UHD re-release the true, definitive "Ultimate Edition."

While still maintaining the same gritty, excessively bleak aesthetic as before, the orange and teal palette benefits from a welcomed uptick in the overall range of colors. Granted, the difference is fairly subtle and nuanced, but it is nonetheless appreciable with the Knightmare sequence being arguably the most striking and evident. The action was originally bathed in a deeper golden yellow tint, sepia amber tones and lots of earthy browns in the first release. But here, the HDR10 presentation is a bit more controlled and has been slightly toned down, giving the pillars of fire a more yellow-orange fiery glow whereas before, the reds looked artificially digital and overstated. This slight change also carries into other moments, such as the sequence prior at the museum when Bruce approaches Diana about the stolen hard drive. The rest of the palette remains relatively the same, but facial complexions have notably improved with actors having a more natural peachy tone and revealing lifelike textures.

The more noteworthy difference while switching back and forth between both versions is the boost in overall contrast and brightness balance, which mildly improves overall quality while also introducing one small nuisance. Peak brightness in the time-traveling Flash scene, for example, shows eye-squintingly brilliant, squeaky-clean whites. Comparatively speaking, the improved specular highlights are welcomed, but it's sadly at a cost, creating a bit of blooming that every-so-slightly blows out the finer details in each lightning bolt and in Bruce's button-down shirt. The same can be said for the brightness levels where the small increase makes for richer, velvety blacks and an overall darker image, providing the IMAX scenes with a more cinematic pop. However, a few places, like the aforementioned Bruce and Diana scene at the museum, also then suffer from some very mild crushing, such in Bruce's tuxedo as the two walk away from the sword of Alexander. Thankfully, shadow delineation is stronger in other areas, nonetheless earning this version the win over its predecessor.

As for the rest of the 4K transfer, the picture hasn't changed much and is awash with a visible layer of natural grain, which can look denser in some areas than in others. While most of the presentation remains highly detailed with visibly distinct lines in the buildings, various vehicles and superhero outfits, the CG action sequences are expectedly lacking and a tad softer than the live-action portions. The IMAX sequences, on the other hand, offer a significant step-up and are noticeably sharper than before, exposing every thread in the fabric of the costumes and the tiniest imperfections in Batman's power armor suit. All in all, this is a satisfying 4K upgrade that delivers a few noteworthy improvements over the previous UHD edition. (HDR10 Video Rating: 84/100) 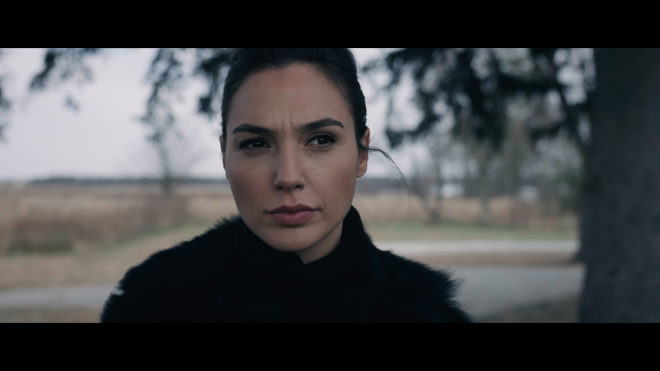 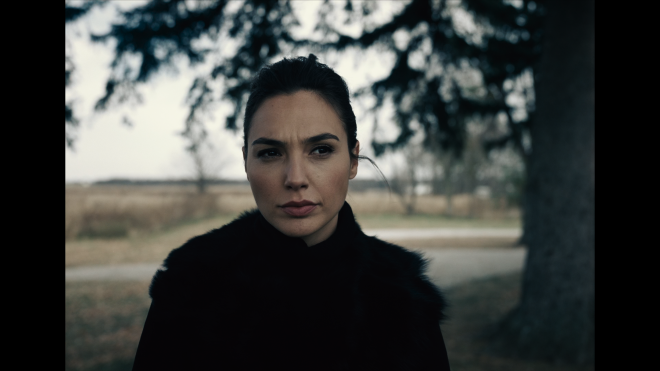 The two embittered costumed heroes clash in home theaters with the same awesomely enveloping, reference-quality Dolby Atmos soundtrack as its Ultra HD predecessors. The ultimate showdown erupts with discrete directionality while maintaining a superb mid-range even during the loudest segments. The design is littered with convincingly fluid movement in the surrounds and the overheads without missing a beat. The battles loudly fill the room with a variety of activity surrounding the listener with debris flying and falling everywhere, subtly but believably generating an immersive hemispheric atmosphere. All the while, the object-based mix displays an impressively wide and spacious soundstage with a great deal of warmth and fidelity, sustaining a broad and terrifically engaging sense of space. The low-end provides an authoritative, palpable punch to every gunshot, explosion and violent confrontation, digging deep into the wall-rattling ultra-low depths down to 10Hz on a few occasions (bass chart). Amid the pandemonium, vocals remain distinct and precise, allowing for every hot-blooded and passionate conversation to be heard.

For a more in-depth take on the audio quality, you can read our review of the 4K Ultra HD HERE. (Dolby Atmos Audio Rating: 98/100) 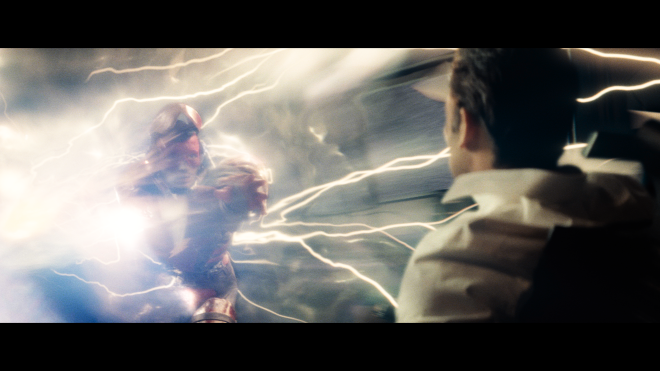 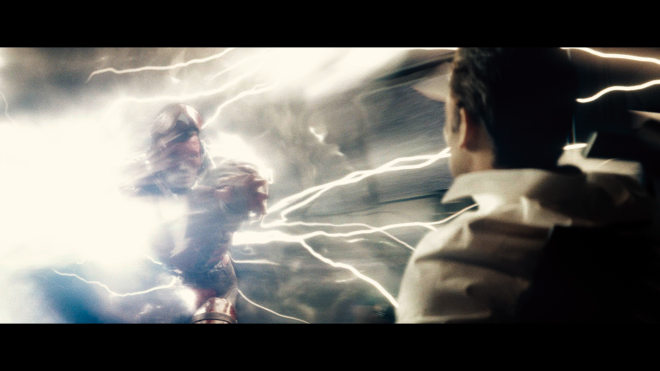 The remastered Ultra HD edition comes with a pair of new supplements. 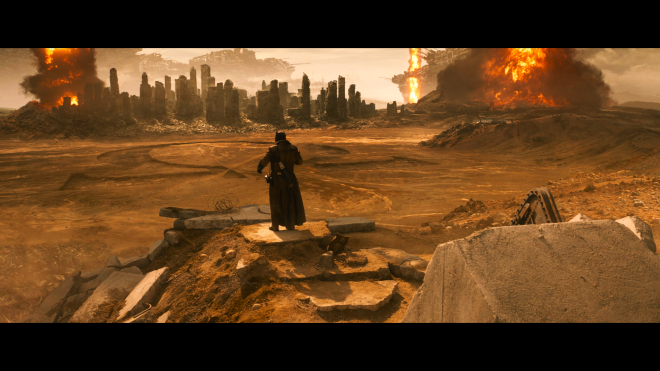 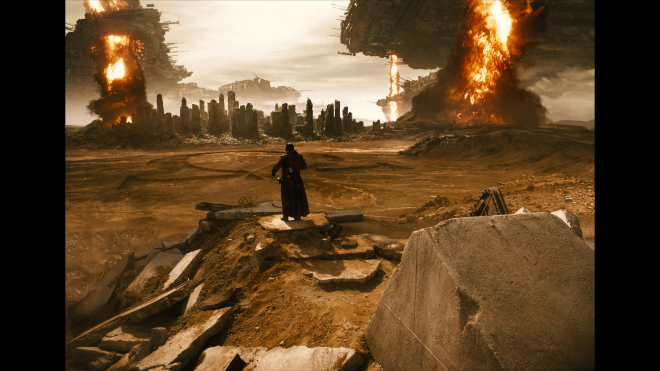 Zack Snyder's Batman v Superman: Dawn of Justice is a sequel following the aftermath of the destructive battle between Superman and General Zod. After witnessing the mayhem and destruction, an angry and embittered Batman vows to stop the last son of Krypton, but Lex Luthor has bigger, dastardly plans for the two superheroes, requiring the help of Wonder Woman to bring an end to Lex's design. The blockbuster crashes into Ultra HD for the second time and dubbed as a remastered edition that includes the IMAX footage in its original aspect ratio and a new color timing. Although the heavily stylized photography keeps the video from truly shining, the 4K HDR10 video nonetheless offers several noteworthy and appreciable moments over its predecessor, making it a satisfying purchase. Added to that, the movie arrives with the same satisfying, reference-quality Dolby Atmos audio presentation and joined by a pair of new bonuses. Overall, the single-disc, standalone package is highly recommended for loyal fans.