In 1987 one small low-budget movie would go on to box office glory and trigger a permanent earworm with Eric Carmen’s “Hungry Eyes” - Dirty Dancing. This fan-favorite for generations finally gets a worthy home video release on 4K UHD Blu-ray from Lionsgate in deluxe SteelBook packaging exclusive to Best Buy. The native 4k Dolby Vision transfer is excellent while the new Atmos mix gives the classic soundtrack the power and presence past releases were sorely lacking. If you love this movie or all things Swayze this is a worthy upgrade - Recommended

It’s the 1960s, the cultural revolution is on the horizon. With her family scuttling off to a resort in the Catskills, worldly idealist Baby (Jennifer Grey) is out of her element saddling the baggage of her parents’ (Jerry Orbach and Kelly Bishop) vision of her as their perfect daughter while her sister hopes to hunt down a husband. When Baby meets the mysterious dance instructor Johnny Castle (Patrick Swayze), Baby’s world and heart are about to be opened up in a way she never dreamed of. 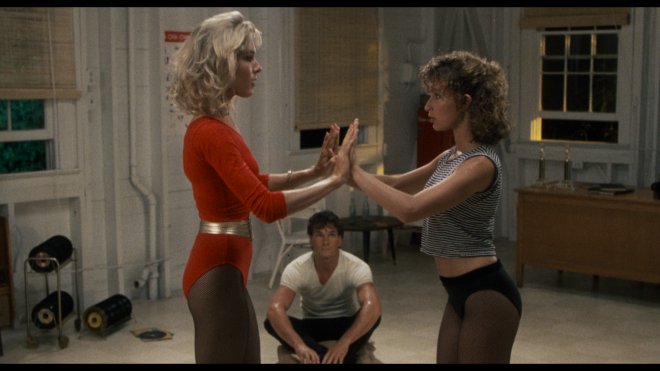 Through numerous VHS, LaserDisc, DVD, and Blu-ray releases, Dirty Dancing has been milked dry on home video ever since it left theaters with a massive worldwide gross of over $200million on a budget of $6million. I was five when this came out to theaters. After losing the battle of wanting to go see Masters of the Universe again, I had to go see this movie with my older sister.

She loved it, I hated it. Sure, the music was great, but I didn’t like the romantic mushy stuff. I wanted to see He-Man damn it! But over the years I grew to appreciate this film. By my teens, I would start to enjoy the movie for its story. By my twenties and film school years, I would appreciate the low-budget independent movie spirit of how the film got made.

Today as a sentimental father closing in on 40, I would call myself a fan of this movie. It’s not perfect, it’s got some flaws with some one-note characters and the middle portion is a bit clunky and the end is a bit too Hollywood clean - but it’s a good movie. It’s a movie designed to make you feel good. It’s entertainment; plain and simple. 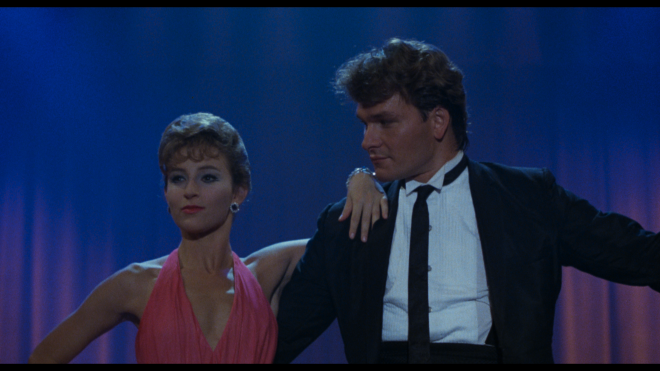 You get a little class warfare love struggle. You get some great late 50s/early 60s tunes with some impressive dance sequences. And by the end of the show, you’re cheering for the characters and Baby to nail that lift and for her parents to remove the stick that keeps them so uptight. It’s a feel-good movie. I know people who aggressively hate this film, and I never could figure out why. It’s no legendary Oscar-winner, it’s got faults, but nothing to get worked up over. I get it if you suffer rampant Swayze-envy - I think every young man of a generation did at some point - but get over it! It’s a movie not worth the effort to hate.

If you hated this movie previously but are willing to reevaluate it, check out the episode of The Movies That Made Us on Netflix that covered this film. This wasn’t an easy shoot. The leads didn’t get along and had beef dating back to the days of Red Dawn. It was a summer movie made into the figged fall so those lake scenes were terrible to film. Swayze did all his own stunts and destroyed himself making it. They kept running out of money and barely even finished it. It’s the little engine that could. The cast and crew had to come together to get the film finished and that heart is in the final product.

We’ve reviewed this one a few times now on HDD so if you want to check out an alternate perspective read on:
Our 2007 Blu-ray Review
Our 2017 30th Anniversary Blu-Ray Review

Vital Disc Stats: The 4K Ultra HD Blu-ray
Not wanting the mine to dry up, Lionsgate is banging out another release of Dirty Dancing with a two-disc 4K UHD Blu-ray + Blu-ray + Digital SteelBook release exclusive to Best Buy. The discs rest in an attractive, and very purple, steelbook case with plastic slipcover similar to Lionsgate’s past SteelBook releases. The discs get their own trays to occupy. The included standard Blu-ray is the 30th Anniversary disc from 2017 and has not been remastered for this release.

As many times as Dirty Dancing has been pushed on disc, each release comes with its own set of issues. The DVDs were usually pretty messy visually or had audio issues. The 2007 Blu-ray was a disaster. The 2017 30th Anniversary disc looked marginally better but the DTS-HD MA 7.1 mix was lifeless and flat. Now we have a native 4K Dolby Vision transfer that is actually pretty damn fantastic compared to all previous releases.

From the start, the opening credits with the black and white footage and red titles are sharper and more colorful. And that trait carries on throughout the film. While this was supposed to be a summer movie, it was shot towards the end of the season so most daylight scenes are pretty cloudy and gray and that aspect has always made the film look a little dark, and that marred previous transfers. Now, detail levels come through with much better clarity helping you appreciate fine facial features and the costumes. Film grain is organic and natural, a little heavier at times, but nothing severe or distracting.

Dolby Vision greatly enhances color saturation where previous releases could look washed out, now natural hues pop off the screen. Blues, reds, the odd splash of yellow look fantastic with skin tones looking healthy. While the color upgrade is notable, it’s the black levels and contrast that really kick for this disc. 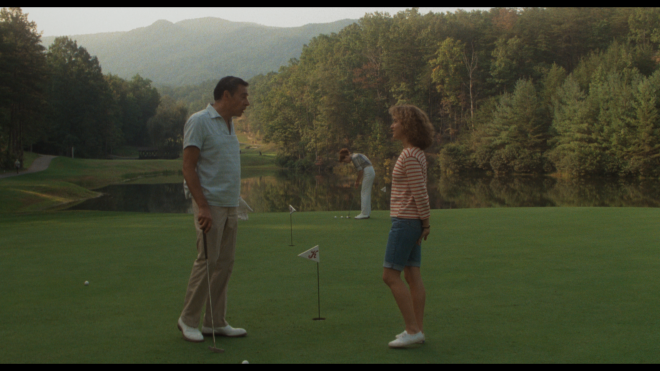 Past releases suffered rough black crush issues - especially night sequences - but now they look deep and inky with better details and shadow separation for a nice sense of image depth. Contrast has brought a lot of white blooming under control as well. There are a couple of odd shots that still bloom - a crane shot of people on the beach that pans down to Baby and her sister trying on wigs has always bloomed terribly, and it still does bloom, but it’s not as severe as past releases. There are still some odd bits of speckling here and there but otherwise the source elements are in great shape.

I’ve never owned this movie before, just periodically checked it out at the library, and I’m impressed with the work Lionsgate put into this one. They usually do great work, but as I said, Dirty Dancing has had a checkered release history up until now. This 4K disc is the worthwhile upgrade fans have been hoping for. 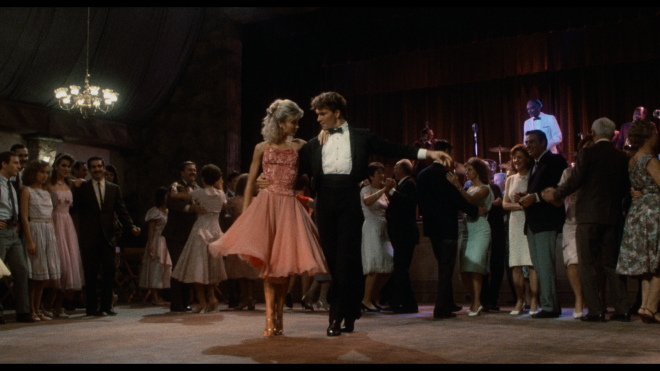 While not the most aggressive Atmos audio mix I’ve ever heard, it finds a welcome home with Dirty Dancing. The film’s audio has never been great, to be honest. The film’s soundtrack has always been fantastic and the highlight - and that remains so here. But it's always been a narrow-sounding film without much "surround" nuance and past releases suffered because of that.

Now with Atmos, there’s actual oomph and power behind the music with additional clarity throughout the rest of the run. This mix still mostly plays as a Front/Center track, there’s just no real getting around that. This mix hasn’t been artificially stretched or engineered to give you a full “Surround Sound” experience. Instead, Atmos works to punch up key moments in the movie. Basically anytime music is played or there’s a big crowd scene, the mix opens up beautifully and naturally. If it’s just Jennifer Grey and Patrick Swayze it’s still a pretty narrow soundscape, but it’s effective and now sounds more natural and lively than before.

This disc also comes with a new DTS-HD MA 5.1 mix that is again an improvement over the previous releases’ 7.1 mix. This mix shares a similar push and presence the past releases just didn’t have. There’s also a Dolby Digital 2.0 stereo track, but that’s practically garbage compared to the other two. If you can roll Atmos, that’s the way to go. Again, not the most aggressively immersive mix ever, but compared to everything that’s come before - it’s a notable improvement. 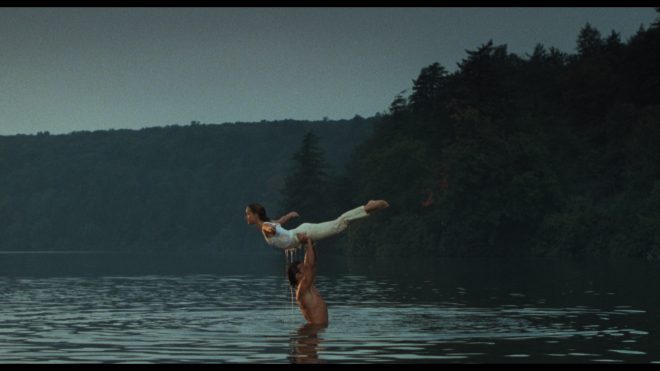 With this set including the 30th Anniversary Edition, the bulk of the bonus features are recycled. It’s a great assortment of extras, but I was hoping Lionsgate could have licensed the episode of The Movies That Made Us for this one. That would have been a great get for this set. That said, we do get one new extra feature - a 12-minute interview with cinematographer Jef Jur on the 4K disc. It’s a nice little extra but if you’re a rabid bonus features nut, this isn’t the make or break highlight for this release. 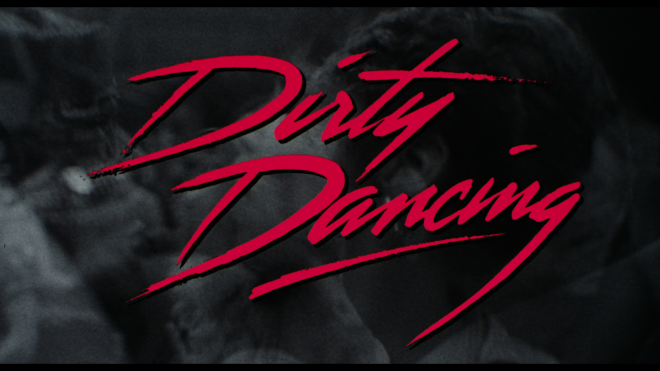 The world probably didn’t want yet another release of Dirty Dancing on disc - but we’re finally getting one worth upgrading for. Over the years I’ve grown to enjoy the film more and more than that first theatrical viewing all those years ago. It’s not a perfect movie - it’s just a damn entertaining one. If you’re a movie junkie that likes to learn how films come together, the making of this particular fan favorite is just as entertaining as the film itself.
With a splendid native 4K transfer and a new Atmos audio mix, Lionsgate has taken this baby out of the corner. Considering past releases I didn’t expect much, but this release easily surpasses every previous disc on the market. I’d understand the hesitation to purchase this one again, but if you haven’t picked it up yet and/or if you’re rolling a full 4K setup with Atmos it’s an easy one to call Recommended.