Isn't she loverly! The 4K UHD transfer of My Fair Lady isn't just a splendiferous rendering of one of Hollywood's all-time great musicals, it's one of the finest discs in the format to date. If you thought director George Cukor's Oscar-winning adaptation of the classic Lerner and Loewe musical about an arrogant, chauvinistic elocution expert who transforms an impoverished Cockney flower girl into an elegant lady looked beautiful before, prepare your eyes for this staggeringly gorgeous Dolby Vision/HDR10 presentation that's sourced from an 8K scan of the 2015 restoration. The fairest of them all? You bet! Must Own.

I've grown accustomed to reviewing My Fair Lady over the years. From the impressive 2004 DVD to the film's disappointing (disastrous?) 2011 Blu-ray debut to the breathtaking 2015 Blu-ray do-over sourced from a brand new restoration, I've closely followed the home video evolution of director George Cukor's Oscar-winning adaptation of the lilting Alan Jay Lerner-Frederick Loewe musical. We all knew this beloved classic would one day receive the 4K Ultra-HD treatment, and when Paramount finally announced this release a couple of months ago, the lyrics to an old Frank Sinatra standard summed up my initial reaction: "The best is yet to come and, gee, won't it be fine!" 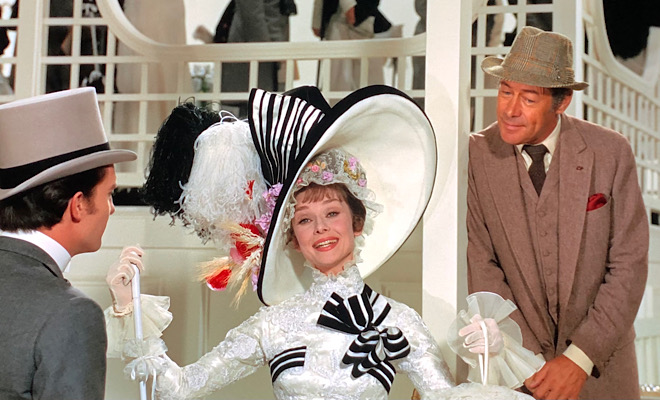 Well, the 4K UHD rendering of My Fair Lady has arrived and it isn't just fine, it's the finest home video rendering yet of this captivating, sumptuous movie that won eight Oscars, including Best Picture, Director, and Actor, and contains such immortal tunes as "I Could Have Danced All Night," "Get Me to the Church on Time," "On the Street Where You Live," and "Wouldn't It Be Loverly." For a more detailed disc assessment, see the video review below, but if you're new to My Fair Lady and/or want to learn more about this sophisticated, endlessly entertaining musical comedy starring Audrey Hepburn and Rex Harrison, check out my review of the 2015 Blu-ray by clicking HERE.

Vital Disc Stats: The 4K Ultra-HD Blu-ray
My Fair Lady arrives on 4K UHD Blu-ray packaged in a standard case inside a sleeve. A standard Blu-ray disc that houses an extensive array of special features and a leaflet with the digital copy code are both tucked inside the front cover. (It's important to note there is no standard Blu-ray edition of the movie itself contained in this release...an odd decision by Paramount, because it might discourage those consumers who haven't yet adopted 4K UHD and who don't yet own My Fair Lady from purchasing this edition.) Video codec is 2160p/HEVC H.265 with both Dolby Vision and HDR10 options, and default audio is Dolby TrueHD 7.1. Once the disc is inserted into the player, the static menu with music immediately pops up; no previews or promos precede it.

To quote Henry Higgins himself, "Damn! Damn! Damn! DAMN!" What a fantastic 4K UHD presentation! Though this 2160p/HEVC H.265 transfer was sourced from the same 8K scan of the 2015 restoration as the 2015 Blu-ray, it doesn't look at all like a hasty, perfunctory upconvert. A hefty dose of TLC seems to have been lavished upon this effort to ensure My Fair Lady looks as spectacular as possible and better than it ever has before.

And that's saying something, considering the previous Blu-ray edition set the bar incredibly high. Imagine that 1080p rendering injected with a heavy dose of steroids and you'll get a pretty good idea of how this 2160p transfer looks. Whether watching in Dolby Vision (as I did) or HDR10, you'll notice everything on screen is kicked up a notch or two (or three). Vibrancy, sharpness, contrast, depth, color, black and white levels, and shadow delineation are all gloriously enhanced, yet never appear artificial. Despite the heightened resolution, the image maintains its film-like feel, thanks to beautifully resolved grain that's seamlessly woven into the picture's fabric. If only cosmetic surgery on people could produce such natural, organic results! 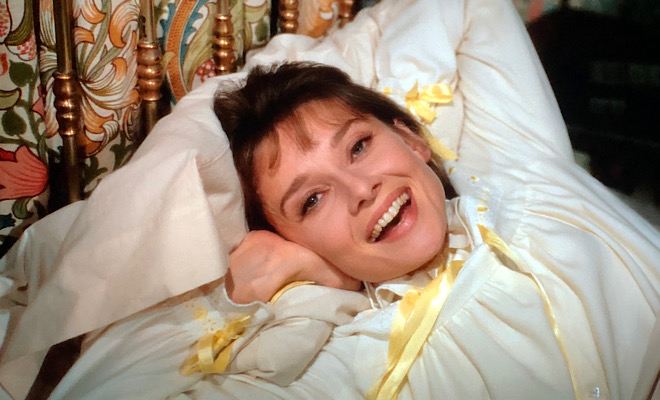 I compared my notes on this transfer to my review of the 2015 Blu-ray transfer and the same elements caught my attention. What looked great then looks even better now, and the improvements are more striking than I expected. Overall, the image is much more vibrant, background details are far sharper, and the increased color spectrum of Dolby Vision produces a much more varied, bolder, and more vivid palette. The unveiling of the flats of fresh flowers early in the film is especially breathtaking, as are the baskets of fresh green peas at the Covent Garden market. Eliza's gaudy orange and purple feathered hat instantly grabs attention and the dirt on both her and her father's faces seems more pronounced. 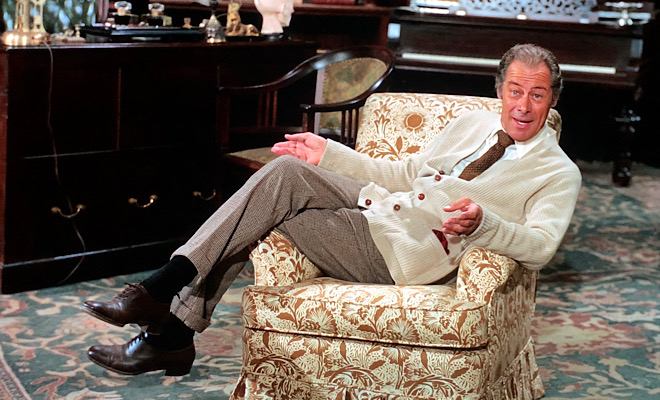 The opening nighttime scene at Covent Garden, which has always appeared a bit dull and drab and fallen prey to crush, looks more vibrant than ever here. The driving rain is more distinct, the texture of the weathered columns and gleaming brass nameplates are crisper, the long shot of the glamorous Covent Garden attendees descending the staircase exhibits more detail, and any crush has been almost completely eliminated. Blacks are deeper and richer, the gradation between the bright whites and delicate creams is more noticeable, and the grays are smokier. As a result, the always stunning Ascot race scene, with its black, white, cream, and gray garbed ensemble, looks every bit as lush as sequences bathed in primaries and pastels. The inky tuxedo blacks are gorgeously juxtaposed against the crystal clear detail of the lace, ruffles, pleats, and chiffon in the white gowns. The weaves in Higgins' tweed jacket and lines in his knit sweater are also impressively rendered. 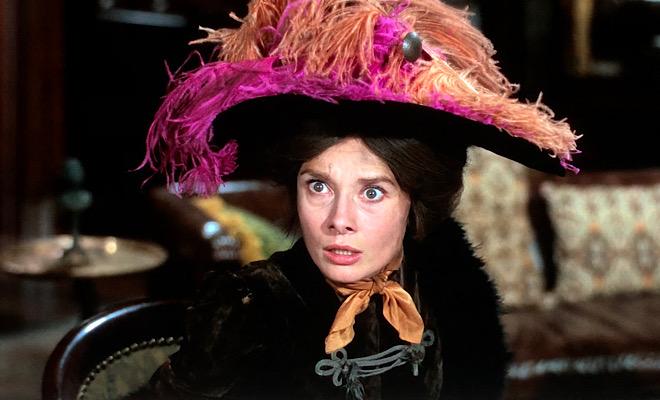 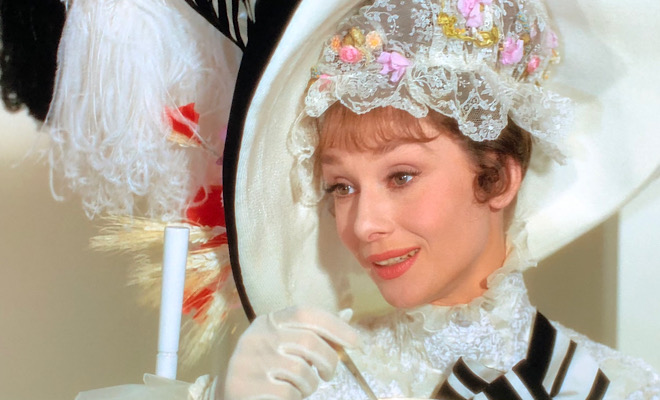 If you appreciated the Oscar-winning art direction-set decoration by Gene Allen, Cecil Beaton, and George James Hopkins before, you'll be blown away by it this time around. From the intricate wallpaper designs and upholstery, pillow, and rug patterns to the wood and leather grains, ornate mantlepiece items, and assorted bric-a-brac in Higgins' home, the beauty of the decor and its impeccable arrangement and coordination is staggering. Mirror reflections are remarkably sharp, you can almost read the titles on the book spines in the library, close-ups are heavenly, and flesh tones appear natural and remain stable throughout...although I still chuckle over Harrison's tanned skin, which seems more than a little out of character for an erudite Englishman like Higgins. 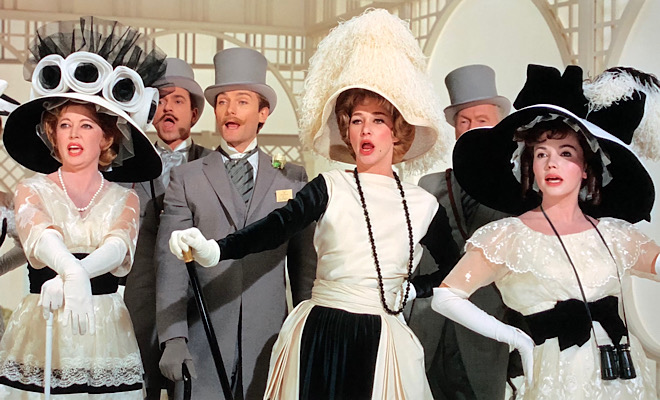 I'd love to find something to nitpick or carp about, but this is about as close to perfection as a 4K UHD transfer can get. Snow White won't be happy to hear it, but My Fair Lady has usurped her position as the fairest of them all...by a long shot.

The exact same Dolby TrueHD 7.1 track included on the 2015 50th Anniversary Blu-ray release has been ported over to this 4K UHD edition. For a complete review of the track, click here.

All the supplements from the 2015 50th Anniversary Blu-ray release are included on a separate Blu-ray disc in this new 4K UHD edition. (Sadly, the audio commentary that appeared on the 2011 Blu-ray that was dropped for the 2015 release is still AWOL.) For a complete, detailed review of each and every extra, click here.

It doesn't get much better than this...at least not yet. Like the richest, most delicious cream, My Fair Lady instantly rises to the top of the 4K UHD heap with an absolutely stunning transfer sourced from an 8K scan of the 2015 restoration. Glorious color and astonishing detail levels highlight this peerless presentation of the Oscar-winning musical that will thrill even the most discriminating videophiles. Even if you don't like musicals and are lukewarm about classic movies, this release demands a prominent spot in your physical media collection. Must Own.