There’s nothing quite like a good potboiler thriller and director Thomas Clay delivers one hell of a picture about the skewed optics of politics and religion with Fanny Lye Deliver’d. Starring Maxine Peake, Charles Dance, Freddy Fox, and Tanya Reynolds - the film is a beautifully captivating and horrifying story set against the backdrop of puritanical 17th century England. Pull Back Camera releases a splendid 2-disc 4K UHD Blu-ray of Fanny Lye Deliver’d with a gorgeous native 4K Dolby Vision HDR presentation of the Director’s Cut with the theatrical cut in 1080p. If you’re up for a thoughtful slow-burn thriller - this one will stick with you. Highly Recommended.

Fanny (Maxine Peake) lives a secluded life with her son Arthur (Zak Adams) and her stern and religious husband John (Charles Dance). Their life of simple routine is permanently interrupted with the arrival of two strangers Thomas (Freddy Fox) and his wife Rebecca (Tanya Reynolds) who say they were set upon by road agents stripping them of their wares and clothes. But their story doesn’t hold up when a zealot county sheriff and his deputy arrive looking for two heathens matching the description of Thomas and Rebecca. Unwilling to be turned over, Thomas holds the Lye family captive initiating a battle of wills and ideals. 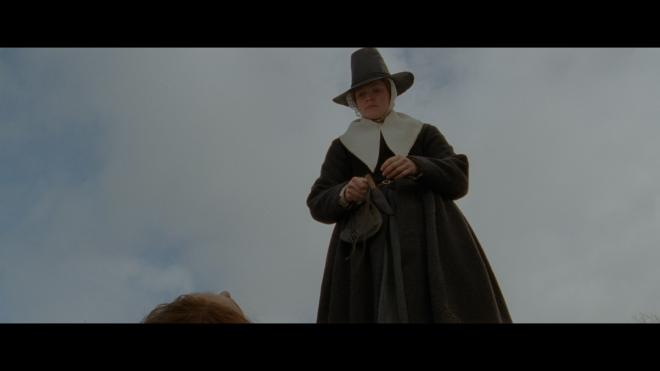 Straight out of the bag, Fanny Lye Deliver’d isn’t a movie you want to rush through. If you’re at all impatient or distractable, it’s not going to be a satisfying watch. This is a slow-burn potboiler that plays loosely with a lot of different genres including folk horror, westerns, and political thrillers. As terrifying as one’s actions can be, it’s their words that offer greater horrors. Coupled with thick period accents and linguistics, if you're not focused you can miss a lot. I can testify that it isn't one to have on with a toddler tearing up his playroom in the background. If you have to watch it at 3:00 in the morning; a man's got to do what a man's got to do.

Writer and director Thomas Clay allows the film to take its time and unravel slowly. The Director’s Cut runs 130-minutes and it uses every second of it - and is much better than the 111-minute Theatrical Cut. We steadily learn about each character’s history and motivations with simple turns of phrases and small actions. This isn’t a movie that’s out to punch you in the nose with its themes.

Fanny Lye Deliver’d works on the level of taking the issue of religious interpretation and spins it with three very distinct views. Through John Lye, we see the classic Patriarchy structure. John is the head of the family, he’s apparently the most worldly and wisest, and no other opinion in his household matters more than his. Through Thomas, we see the spin of religion and Christ’s sacrifice as an act for man to enjoy the pleasures of the flesh and that sin is not fully enjoying the earthly body’s pleasures. Then we see the horrors of religious zealotry in the form of the High Sheriff (a terrifying Peter McDonald) who uses religion and “God’s will” to perform and excuse all of their terrible actions. Ultimately everyone cherrypicks pieces of religious text to their own means and through Fanny's eyes, we learn of everyone's hypocrisy.

If you were to break this film into genre thirds, Fanny Lye Deliver’d is about one-third meditative political thriller, one-third potboiler, and one-third folk-horror/western. The folk-horror aspect could have used a little beefing up in my opinion. Where this film can drag a little is on the front end as John and Thomas exchange their battle of wills through religious ideology and interpretation. I fully love how Clay manages these characters and their exchanges and actions exposing the hypocrisy of their own arguments, but by the same token, the High Sheriff plotline feels a little short-changed.

While not perfect, I really enjoyed Fanny Lye Deliver’d. The start may be a tad slow, but when you see John grab a switch to punish his wife and child for a mild indiscretion without any care that strangers are in his midst, the feeling of dread begins to build steam. You start to feel what this film is going to become. For a more farcical hot-take, this film is like watching your hippy aunt and conservative uncle unload on one another during Thanksgiving dinner only for your terrifyingly nihilistic cousin to come in and scare the shit out of everyone with their own opinion. You don't want to be in the room, but you don't mind listening through the walls.

Ultimately what makes this film work is the amazing cast. I fully appreciate Thomas Clay’s smart script and impressive steady direction, but I have to give an immense amount of credit to these actors. Maxine Peake is terrific as Fanny. A woman struggling with her place in the world against societal expectations and the promise that things could be better for her. Ultimately the conflicting arguments presented in this film are filtered through her and her need for being something more than she currently is allowed to be.

Then we have Charles Dance who has always been well-suited at playing the heavy - one glare from him and you know your hide is about to get the tanning of a lifetime. I first saw that look when I was a little kid watching The Golden Child and it's still unsettling. Freddy Fox delivers what I would call his first real breakout performance. I’ve only seen him in a handful of films and he’s been a fine side character performer - but here he really steps up and owns the screen. Tanya Reynolds doesn’t have a whole lot to do as Rebecca but she pulls off a lot of thematic elements central to the film with ease. Peter McDonald may not have a lot of time, but you can see he fully enjoyed playing evil with wry bemusement.

As I said at the outset - this film may not be for everyone. It’s not full of action and moves at a languid pace. The thriller elements come mostly from conversations instead of actions. Fanny Lye Deliver’d is a film that’s very contented with taking its time to get to where it’s going. With that, the Director’s Cut is absolutely the best way to go. The 111-minute Theatrical Cut is fine enough, it gives you a decent overview, but those extra scene extensions, restored sequences, and just the roomier pacing without the need of a narrator to explain what’s going on leave you with a richer, more thought-provoking film to enjoy.

Vital Disc Stats: The 4K UHD Blu-ray
Fanny Lye Deliver’d makes its mark on 4K Ultra HD Blu-ray from Pull Back Camera with a two-disc 4K UHD + Blu-ray set limited to 3,000 units. The Director’s Cut is presented on the BD-66 4K UHD Blu-ray with the Theatrical Cut occupying the Region Free BD-50 disc. All of the bonus features are found on the standard Blu-ray. The discs are housed in a clear two-disc case with a 36-page booklet containing images essays and critic reviews of the film. 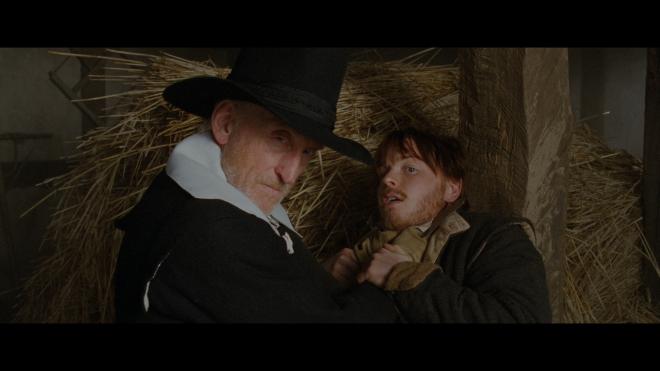 Shot on 35mm and reportedly finished with a 4K digital intermediate, Fanny Lye Deliver’d arrives on 4K UHD Blu-ray with an often stunning transfer with Dolby Vision HDR (and HDR10). Compared to the included 1080p Blu-ray, the benefits are almost instantly apparent with color saturation, white levels, and blacks and shadows. Details also gain a notable uptick in overall quality with a natural grain structure for a richly film-like appearance.

This film offers a beautiful warm and rustic brown/gold color pallet to work from, so everything has that sort of earthy quality. Greens are lush and lively with blues and reds earning their pay with some terrific primary pop. Where Dolby Vision and HDR10 work for this movie is with the natural lighting. Much of the film’s interior scenes are lit with either daylight or flickering candlelight. For the daylight scenes, the bright whites of the sun avoid some of the blooming that is apparent on the 1080p Blu-ray. When the Sheriff arrives at the farm for the first time, it’s easier to make out his shape and appearance through the windows as he rides closer. 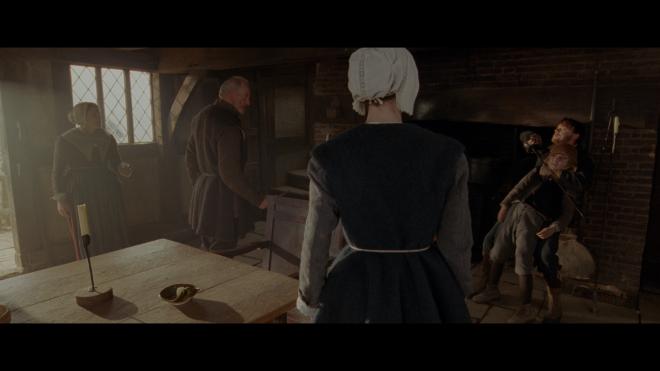 When the film moves to night and the only light is fire-lit, the nuanced shading from the orange/yellow to deep inky black is much stronger with a better sense of depth without slipping towards crush. Another night sequence is when John is forced to go to the well on his lame leg. It appears a blue filter was used but on the 4K disc, it’s less of a bright blue and appears a darker twilight color than the 1080p Blu-ray. To be fair, the 1080p Blu-ray is very good and is an often impressive image, but this 4K disc bests it at every turn. 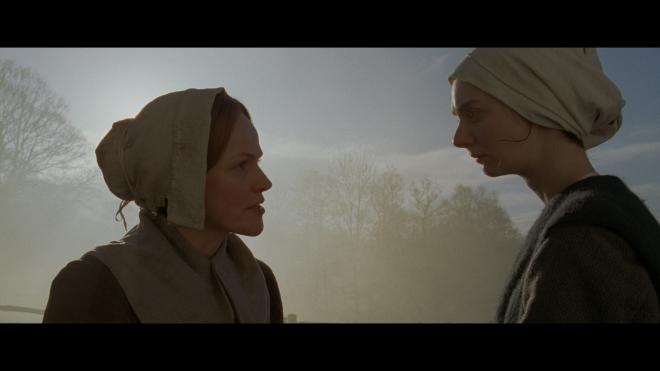 Fanny Lye Deliver’d comes with a solid atmospheric DTS-HD MA 5.1 Audio mix for both the Theatrical Cut and Director’s Cut. Dialog is crystal clear and never at odds with the rest of the mix. To that point, these are some thick accents with period language so you may feel the need to pop on the subtitles here and there. Sound effects are subtle, it’s an isolated farm so there’s not a lot of big action effects to the mix, but there are plenty of atmospheric elements to keep all the channels engaged for some appreciable surround imaging. Low tones don’t punch a lot of LFE, but there are a few sequences, especially towards the end that work the subs a little harder. Scoring is on point without interfering with the mix. Levels are strong without the need to monitor volume. 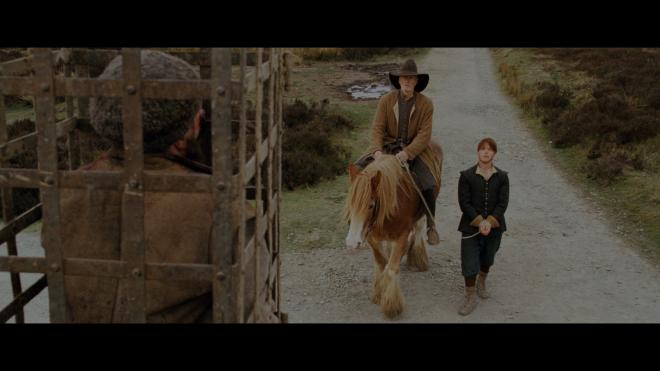 Unfortunately, there’s not a huge number of bonus features attached to this release,  but what it lacks in quantity makes up for in quality. The most informative materials are the audio commentary on the Director’s Cut and the writings found in the booklet. The Edinburgh International Film Festival Q&A was conducted during COVID, so it’s another unfortunate Zoom meeting scenario but Clay, Dance, Roberts, and Fox offer a lot of insight into the material and shooting the film so it's worth checking out. Thankfully everyone used decent mics and can be heard.

Fanny Lye Deliver’d is a thoughtful thriller. It’s also a bit of a western set in the structure of 17th century England while also sharing some folk-horror elements. In lesser hands, this jumble of genres could have gone sideways fast, but this is a measured and steady piece that’s interested in big ideas and themes with a great cast to execute it all. If you’re not a fan of the slow-burn potboiler, you may be left wishing this would skip along at a faster clip. However, if you’re patient and enjoy a film that takes its time, Fanny Lye Deliver’d pays off.

Pull Back Camera delivers an excellent native 4K Ultra HD Blu-ray with Dolby Vision HDR for the longer - and better - Director’s Cut. The film looks amazing and this disc fully captures the visual splendor this film has to offer. The audio is top-notch and while not plentiful, the bonus features offer a lot of great insights into the production and worth checking out. If you’ve only come across the shorter theatrical cut, do check out the longer version. A little extra space and time without the narration make a much more interesting thoughtful final piece. Highly Recommended.