Sergio Corbucci's Django is a terrific, massively influential Italian western that remains a beloved favorite of the subgenre. The cult classic hauls its own coffin into Ultra HD town with a stunning demo-worthy 4K presentation, the same pair of DTS-HD tracks and extensive wealth of supplements that includes a Blu-ray copy of Ferdinando Baldi's Texas, Adios. The Limited Edition UHD package is Highly Recommended.

Sergio Leone may be remembered as ushering in a new vision of the American West with his Dollars Trilogy, but I will forever argue that the opening sequence of Sergio Corbucci's Django actually signaled a departure from Hollywood conventions and formula. Our would-be hero doesn't ride into town atop his trusted steed and save the locals from a violent posse of ruthless outlaws. Instead, we see the titular character played by the memorable Franco Nero in sharp contrast to everything we've come to know about the genre, epitomizing the traits of the antihero by wearing dark, dirty attire and walking on foot. The man is much more menacing than valiant as he drags a wooden coffin behind him across the desert plain, the ultimate reminder of one's mortality. Immediately, we know Django is the bringer of death.

Even the colorless, muddy town he visits is the antithesis of the American image of the West. Contrary to the sterilized and romanticized idea of this unique period in U.S. history, the town is a desolate grimy place on the verge of becoming a ghost town. Adding more fuel to the intentional irony, it soon becomes apparent that much like Leone's Fistful of Dollars, the plot is a loose reimagining of Akira Kurosawa's Yojimbo, which itself was inspired by American westerns. Only, Corbucci sets his tale in a place that feels even more despondent and godforsaken with an eye for detail and rich in the swagger, grandeur and spectacle commonly associated with Italian westerns.

With its themes — or better yet, social critiques — about racism and religious fanaticism, Django is a brilliant motion picture, both poetic and demythologizing. And although The Great Silence remains his pièce de résistance — and a dearly beloved personal favorite of yours truly — Django will and should forever be remembered alongside as primo gritty, ultra-violent Italian western drama. (Movie Rating: 4.5/5) 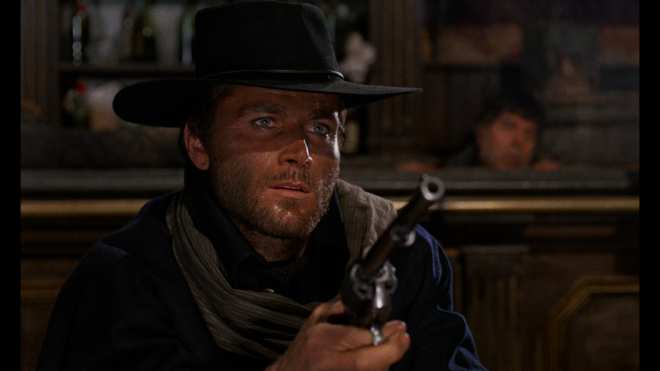 Although starring Franco Nero as the ruggedly tough, amoral and dangerously silent gunslinger familiar of Italian westerns, Ferdinando Baldi's Texas, Adios unfolds in the style of a traditional American western. By this, I mean Nero's Texas sheriff Burt Sullivan is more hero than antihero, motivated more by his strong sense of justice in the vein of John Wayne than a pursuit for personal monetary gain by any means necessary, as would later become the archetype made famous by Clint Eastwood. Also, the violence depicted on screen is less graphic and explicit than usually seen in the Italian cinema of this period although the body count remains relatively high. Of course, none of this is meant to disparage Baldi's work or the film, as it is nonetheless an entertaining tale about our hero seeking vengeance for his father's death decades earlier. Admittedly, the story can feel somewhat melodramatic, particularly in Burt's younger brother tagging along yet lacking the mature skills for navigating through the world of the immorally corrupt and dangerously seedy underbelly of civilization. On the other hand, an unforeseen revelation halfway through adds to the character's conflict and ratches the tension for a terrifically satisfying and well-earned conclusion. (Movie Rating: 3.5/5) 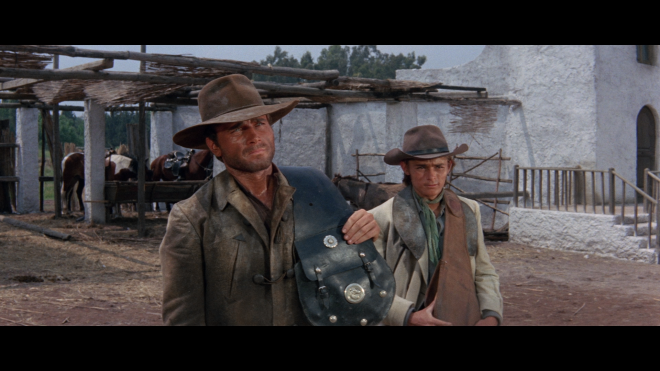 Sergio Corbucci's Django rides into town courtesy of Arrow Video as a two-disc 4K Ultra HD Limited Edition box set. Inside an attractive, sturdy sepia-brown cardboard box, a black, slightly thicker keepcase houses a triple-layered UHD100 disc on a center spindle while a BD50 disc of Ferdinando Baldi's Texas, Adios sits comfortably on the opposing panel, and the two are joined by six double-sided lobby cards and a flyer for Arrow Video's new streaming service. The keepcase features new reversible cover art, and the side-sliding box also contains a double-sided poster and a 60-page booklet featuring four analytical essays by Howard Hughes and Roberto Curti, an extract from the book Sergio Corbucci and a collection of excerpts from various contemporary reviews of both films. The wealth of special features are spread between both discs, and each goes straight to the menu screen with full-motion clips and music playing in the background.

The coffin-hauling gunslinger arrives on Ultra HD with a stunning, demo-worthy HEVC H.265 encode, offering a remarkably impressive upgrade over its Blu-ray predecessor. According to the accompanying booklet, the original 35mm camera negatives were restored and remastered in 4K resolution, resulting in the best presentation of the cult classic ever seen on any home video format. Awash with a noticeable thin layer of natural grain throughout, the fine lines and textures in the costumes and faces of the cast are simply outstanding and razor-sharp. As would be expected, a few sequences slightly dip in resolution and fall on the softer side, but overall definition is strikingly exceptional, exposing many of the small architectural details of the town and the interior of Nathaniel's saloon.

The native 4K transfer also boasts an improved contrast and brightness balance, showering the action with inky, velvety blacks and clean, brilliant whites. Specular highlights enjoy a more nuanced but nonetheless noticeable boost, providing some of the hottest spots with a crisp, narrow brilliance that allows for better visibility and clarity, such as in the edges of the clouds in the gloomiest days and the realistic flames of the torches. The best aspect of this Dolby Vision HDR presentation easily goes to the sumptuous array of colors from start to finish, breathing new life to a beloved classic. From the richly saturated red scarves and hoods of Jackson's Red Shirts to the dark, navy blue of Django Union uniform, primaries are continuously dynamic and spirited. Likewise, secondary hues, like the grimy browns, faded tans and warm, buttery yellows of the town, are animated and incredibly vivid, and the sunburnt complexions of the cast appear far more natural with lifelike textures that reveal every pore, wrinkle and blemish.

All in all, this 1.66:1 image has a beautiful film-like quality that makes this UHD edition the absolute best the film has ever looked at home. (Dolby Vision HDR Video Rating: 96/100) 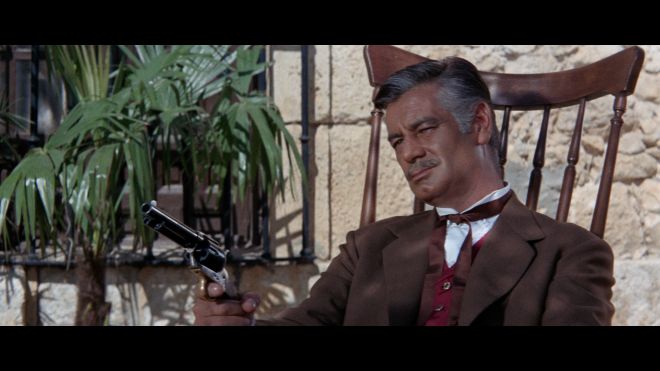 The Baldi favorite rides into home theaters with the same excellent AVC-encoded transfer from the standalone 2018 Blu-ray, which was itself struck from a 2K remaster of the original two-perf Techniscope 35mm camera negatives. Presented in its original 2.35:1 aspect ratio, the results are fantastic considering the film's age and low-budget history, showing that the elements are in great condition.

Fine lines and objects are highly detailed for a majority of the runtime, revealing the unique features in the Spanish architecture, the small pockmarks in the walls and each individual pebble on the ground. Some scenes drop mildly in resolution and look a little softer than others. Occasionally, minor scratches and hairs also make an appearance, and there are a few instances of age-related discoloration, most egregiously during a bar fight at around the 24-min mark. Nevertheless, overall definition is in excellent shape with outstanding contrast and brightness balance, displaying clean, crisp whites and rich, true blacks with strong shadow delineation. At the same time, primaries are richly saturated and animated while secondary hues vibrant and well-rendered, and facial complexions appear accurate to the climate with healthy, highly revealing tones in the cast. (Video Rating: 82/100) 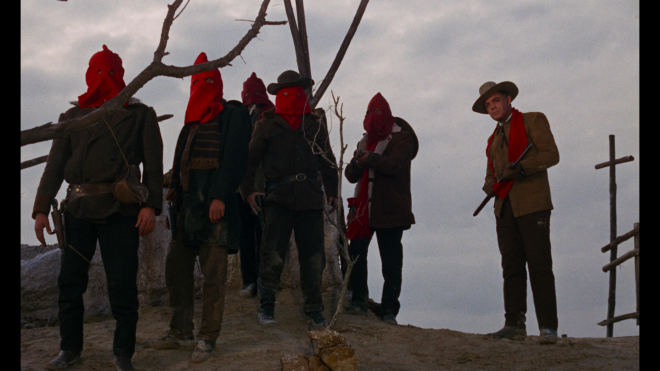 Like the video, the original audio was also remastered from the optical audio negatives to make this excellent DTS-HD Master Audio 1.0 soundtrack. The ADR work is perhaps a bit more noticeable and apparent, but the center channel delivers superbly clean and precise dialogue reproduction. Although not one to truly impress most listeners, this is nonetheless a surprisingly engaging lossless mix, exhibiting sharp, well-defined acoustical details from start to finish to generate a dynamically, well-balanced soundstage with outstanding fidelity. Gunfights and explosions are cleanly rendered with minimal distortion or loss of clarity, making a faithful reproduction of the original design that fans will absolutely love. (Audio Rating: 84/100)

Justice is served cold and equipped with the same excellent DTS-HD MA 1.0 soundtrack enjoyed on the previous BD edition. Overlooking the obvious ADR work, dialogue is crystal clear and well-prioritized, and the mid-range is surprisingly dynamic with excellent clarity and definition into the upper frequencies. The music benefits from the remaster, exhibiting outstanding fidelity and warmth in the orchestration, providing the lossless mix with a nice sense of presence and depth. The low-end doesn't leave much of an impression, but it is adequate at delivering some appreciable weight. In the end, the design is a fantastic complement to a criminally underrated western. (Audio Rating: 80/100) 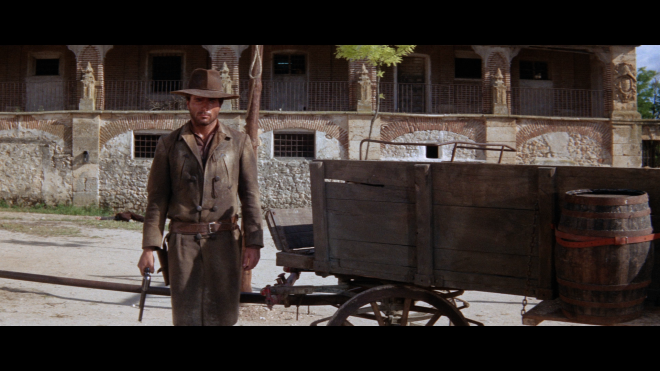 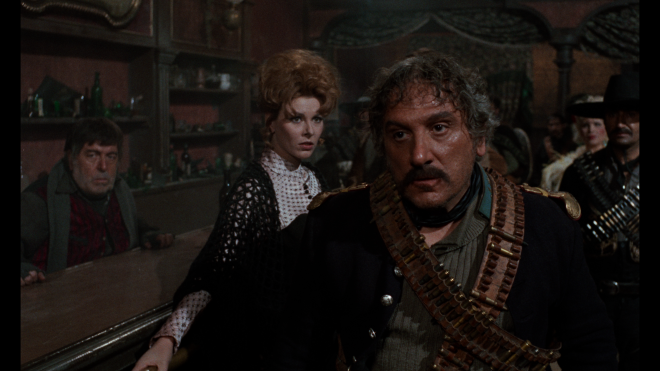 In spite of its B-film origins, Sergio Corbucci's Django is a terrific example of the conventions and devices that define the Italian western. Over the decades, the film has grown as a major influence spawning several copycats. Referenced in many contemporary movies, the original is still a classic and a favorite amongst followers of the subgenre. The cult classic hauls its own coffin into 4K Ultra HD with a stunningly beautiful, demo-worthy Dolby Vision HDR presentation, giving one of the coolest movies ever made another lease on life, but arrives with the same pair of DTS-HD MA soundtracks as the previous Blu-ray release. With a wealth of supplements, a book, a poster and a Blu-ray copy of Ferdinando Baldi's Texas, Adios, the UHD package is highly recommended while loyal fans should not hesitate on a purchase.