Although at times frustratingly convoluted, Christopher Nolan's Tenet is a surprisingly satisfying sci-fi espionage spectacle inspired by complex theoretical science. The spy action thriller lands on Ultra HD with a spectacularly gorgeous 4K video but the same, ear-piercing DTS-HD Master Audio track and set of special features. Nevertheless, the overall UHD package is a Recommended addition to the 4K library.

As with some of Christopher Nolan's films, Tenet is a baroque labyrinth of ideas either grounded in complex science or inspired by their possibilities. To fully grasp or appreciate the layers upon layers of themes piloting his latest visual extravaganza, repeat viewings are undoubtedly in order, which his most loyal fanbase is sure to do for the next few years. It also wouldn't hurt to watch with a knowledgeable understanding of physics or perhaps, with one's local theoretical physicist if they are available and willing to pause ever so often to explain the "W-T-F" moments throughout this 150-minute time-traveling ball of confusion. On the other hand, it's to Nolan's credit that he somehow still manages to turn the most preposterous and absurdly convoluted into something engagingly entertaining and spectacularly mesmerizing. You can just as easily sit back and enjoy the film as a wildly insane popcorn blockbuster or recognize it as Nolan at his most absurdly "Nolanesque."

And this is where Nolan's true talent rests after all. Over the course of ten films spanning three decades, he has demonstrated that he can tell elaborate plots with a cinematic flair that not only strikes as though inspired by the history and art of cinema but also feels like a loving ode to that art and history. With each of his films, he has toyed with various intriguing metaphysical themes wrapped in easy-to-digest genres and familiar conventions, and Tenet is no different. The mind-bending trip centered around the concept of inverting an object's entropy is ultimately, at its heart, a traditional espionage action-thriller. This is Nolan's fantastically bonkers take on the 007 series with John David Washington playing his own version of a shrewd, urbane secret agent racing to avert a catastrophe at the hands of a wealthy madman. 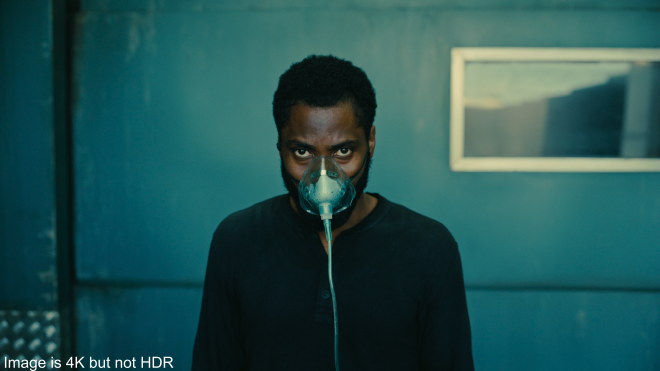 Only, Washington's character known simply as The Protagonist, which blatantly points to other possible interpretations, is not quite as sophisticated and debonair, as is pointed out a couple times: first by Michael Caine's British intelligence officer and later by Elizabeth Debicki's Kat, the antagonist's estranged wife. However, what the competent spy lacks in smooth-tongue charm he more than makes up with his single-minded determinism, fighting skills and ability to adapt to any given situation. At the opposite end is Kenneth Branagh as the Russian oligarch with a terrifying temper Andrei Sator, and he is very much a Bond villain in every respect, down to having a physical deformity motivating his madness. This, then, makes Debicki the plot's "Bond girl," the femme fatale playing a pivotal role in the mission, and she fits the trope so strictly that she's sadly given little room to be seen as a person with depth or an arc.

Robert Pattinson also stars as The Protagonist's MI6 counterpart, and he serves as the reliable assistant to the hero. Essentially, he is to The Protagonist what the CIA's Felix Leiter is to James Bond and always at the ready to provide exposition, which is arguably where Tenet misfires. Nolan's script, which he reportedly had been working on for about twenty years, is so jammed-packed with ideas and theoretical abstractions that it often feels like a bloated analytical summary of more perplexing concepts. It's as though characters have to pause every few minutes to explain the puzzling, mind-melting theories informing the plot, and the spectacularly thrilling action is then for interrupting the monotony of said exposition. But, at least, this is the film's saving grace. Nolan satisfyingly mesmerizes with enough striking, wild-eye visuals to keep us glued while also leaving us wondering how to decipher it.

Warner Home Video brings Christopher Nolan's Tenet to Ultra HD Blu-ray as a three-disc combo pack with a Digital Copy code. When redeeming said code via wb.com/redeemmovie or MoviesAnywhere, users are granted access to the 4K digital version in Dolby Vision with Dolby Digital Plus 5.1 audio. The triple-layered UHD100 disc sits comfortably opposite a Region Free, BD50 copy stacked above a third BD25 disc containing supplements. All three are housed in a black, eco-cutout case with a slipcover. At startup, the disc commences with a video clip before switching to a static screen of the film's title with the usual options along the bottom and music playing in the background. 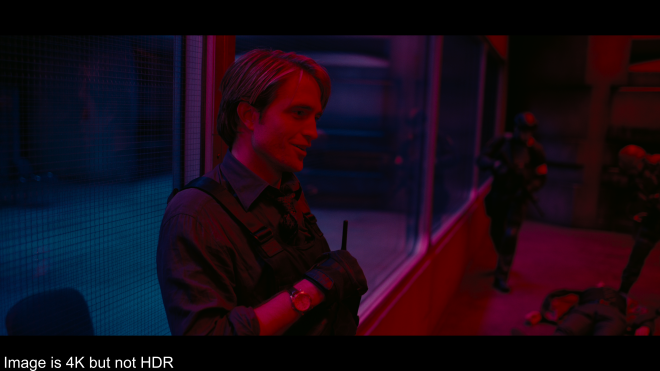 Nolan's latest sci-fi thriller debuts on Ultra HD with a magnificently gorgeous and often demo-worthy HEVC H.265 encode that surpasses its Blu-ray partner in some respects while also being its equal in other areas.

Shot exclusively on 65mm and IMAX cameras, the freshly-minted, native 4K transfer boasts sharper definition in nearly every scene, delivering some absolutely stunning and picturesque snapshots of the various locations. Occasionally, the sharpest lines waver a tad and show some very faint jaggedness during a few extreme wide and establishing shots, but thankfully, the majority of the runtime is stable, from the fine stitching in the clothing to the edges of most buildings. We can better make out the particular features in the architectural design of each exotic locale, the smallest imperfections in the roofs, the discrete cracks on the walls, the tiny pockmarks along the rocks and cliff sides, and the most minute pebble or rubble during the explosive finale. Even the many fast-paced visuals are a stunning spectacle, maintaining striking clarity amid the debris and in the minute details of every reverse sequence.

Also, like the Blu-ray, the 4K video comes with alternating aspect ratios, switching between 2.20:1 and 1.78:1 at the most seemingly random moments, which can be a tad annoying for CIH enthusiasts. Interestingly, contrast enjoys a nice welcomed boost though not by a substantial margin, looking comparatively on par as its 1080p brethren. Granted, whites are noticeably brighter and cleaner in the fluffy clouds, some articles of clothing and in various light fixtures. Likewise, the minor improvement in specular highlights doesn't significantly add much to the overall quality of the visuals even though they are slightly tighter and punchier in some areas, such as the sunlight reflecting off the chrome and metallic surfaces in the Tallinn car chase. All things considered, the encode seems to be faithful to the filmmakers' aesthetic intentions and looks undeniably beautiful on Ultra HD.

Meanwhile, blacks are notably inkier and richer, providing the 2160p picture with penetrating, silky shadows that maintain superb visibility in the darkest, murkiest corners for a majority of the runtime. However, a few moments sadly falter or look a bit dull compared to the rest, such as at the beginning when the Protagonist is strapped to the chair at the train yard. Brightness levels noticeably wane, making the image look flat with murky, lackluster shadows. The scene when the Protagonist first meets Sator at a dinner party doesn't look much different than its HD peer, and in other places, blacks dip just enough to crush some of the finer details in the clothing or the background information, such as when the Protagonist, Neil and Kat are traveling invertedly on the boat and discuss their next move.

Thankfully, the best and most appreciable upgrade in this HDR10 presentation is the improved color palette, which tends to feel somewhat limited in some spots due to Hoyte van Hoytema's stylized, teal-orange cinematography. Nevertheless, the visuals are often bathed in fuller, richer primaries, and this is especially true of the crimson reds and electrifying cobalt blues inside Sator's turnstile in Tallinn. Many of the other locales captivate with a sumptuous array of secondary hues, displaying warmer yellowish tones in the well-lit interiors of some scenes, a dramatic fiery-red orange in the explosion at Oslo airport and the attractive mix of earthy browns and sepia tans in the climactic battle at the Stalsk-12 compound. Facial complexions also appear healthier with a more realistic reddish tone and lifelike textures in the entire cast than its HD SDR counterpart.

All and all, the cinematic mind-bender inverts time and logic on UHD with a remarkably beautiful 4K presentation fans will surely love. (HDR10 Video Rating: 92/100) 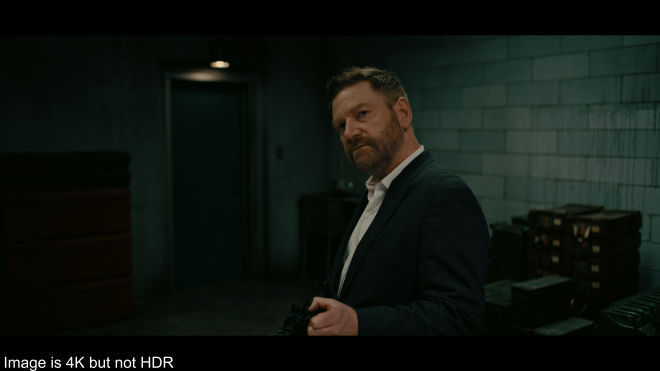 Nolan's latest byzantine extravaganza erupts on the scene with a tremendously bombastic but also obnoxiously loud DTS-HD Master Audio 5.1 soundtrack. This lossless mix is as likely to impress and test your system as it is to have you scrambling for the remote to quickly adjust the volume. In fact, the audio design is so annoyingly deafening that it distracts and hinders more than it serves a benefit to the story or produce a truly rewarding audio experience. This has been common practice for some of Nolan's films for some time now, but in this instance, it is absurdly ridiculous and at times irritating. The most egregious offense is the dialogue continuously overwhelmed by the grandiose action sequences, which honestly, would have been forgivable if not for the many conversations also drowned out by the endless noise and Ludwig Göransson's score. And this is true even during the so-called quieter, more character-driven moments, which are pointlessly at a lower volume than the rest of the movie.

Amazingly, the design maintains outstanding clarity and distinction in the higher frequencies while the mid-range is splendidly extensive and dynamic, creating what would otherwise be a terrifically engaging soundstage had the filmmakers reined in the overall volume a bit. Interestingly, in spite of this positive, there doesn't appear to be much acoustical detailing or real appreciable distinction within Göransson's musical arrangement. Don't get me wrong, we can still make out the individual instruments, but the overall music feels as though at a set volume rather than providing any nuance or substantial differentiation within each note and melody. And to be perfectly honest, the whole presentation ultimately feels cold, metallic and somewhat disharmonious when mixed with the other wildly garish, piercing sound effects.

On a more positive note, the surrounds are endlessly employed, enveloping the listening area with various discrete atmospherics that flawlessly pan all around. From a busy restaurant full of patrons and the crowded streets of Mumbai to the hectic chaos of a military operation and a berserk, high-speed chase in Tallinn, ambient effects are heard from every direction, generating an awesomely immersive 360° soundfield that's amazingly consistent. Also, an aggressively palpable and incredibly robust low-end delivers a room-energizing presence and wall-rattling weight to every bullet, crash and explosion. Several moments plummet into the ultra-low depths with serious decibels behind them, the sort to not only disturb the neighbors but also test a subwoofer's capabilities. (Audio Rating: 84/100) 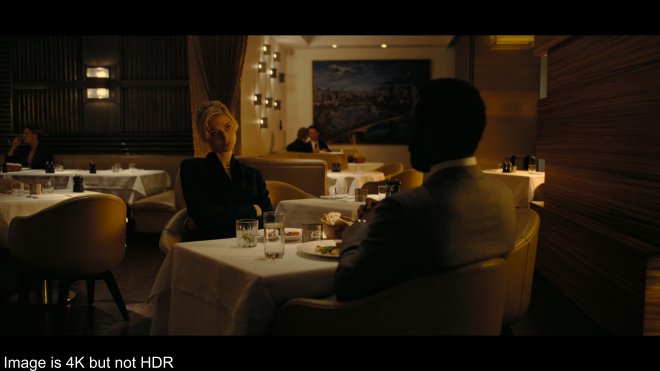 This Ultra HD edition of the film arrives with a third disc containing the same bonus features as its Blu-ray counterpart. 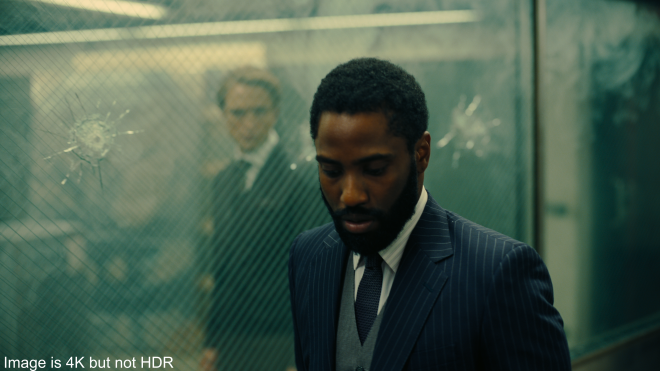 Although feeling frustratingly convoluted and needlessly over-complicated at times, Christopher Nolan's latest sci-fi spectacle Tenet remains a surprisingly satisfying popcorn blockbuster starring John David Washington, Robert Pattinson, Elizabeth Debicki and Kenneth Branagh. At its heart, the plot is a relatively traditional espionage action thriller littered with familiar tropes, but in true Nolan form, the story is grounded in perplexingly complex theoretical science that manages to be both its hindrance as well as its point of interest. The sci-fi spy actioner lands on Ultra HD with a spectacularly gorgeous 4K HDR10 presentation, supplying several notable upgrades over its Blu-ray counterpart, but the same, ear-piercing DTS-HD Master Audio 5.1 soundtrack. Porting over the same set of supplements, the overall UHD package is a recommended addition to the library.