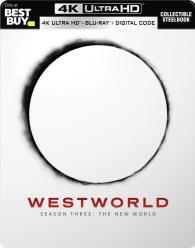 Following the aftermath of last season’s Westworld massacre, “hosts” Dolores, Maeve, Bernard and Charlotte Hale begin a new chapter – outside of the park – exploring the “real world” and who they will become in the wake of their liberation. Over the course of eight hour-long episodes, Season Three finds Dolores prepared to wage war on humanity and Bernard trying desperately to stop her, while Maeve reunites with familiar faces in a new realm – and all discover that the world outside is as full of deception and predetermination as the one they’ve always known.