With spectacular visuals of worldwide catastrophe, Roland Emmerich's 2012 continues to be pure popcorn entertainment despite the plot's ridiculously laughable premise. The sci-fi disaster blockbuster erupts on Ultra HD with a strong though somewhat disappointing 4K video, but a demo-worthy Dolby Atmos track more than makes up for it. Loaded with tons of bonus features, the three-disc UHD edition is Worth a Look for fans.

Delivering yet another CGI-laden extravaganza meant purely for popcorn entertainment, Roland Emmerich's 2012 never strays from the same formulaic plotlines seen in nearly all of the director's films — a dysfunctional family in turmoil that must overcome personal issues in order to survive a common adversity. Ten years later, this furiously chaotic sci-fi epic remains a visually satisfying two and a half-hour diversion, a non-stop breathtaking spectacle with novelist-turned-limo-driver John Cusack hurdling from several apocalyptic disasters. Meanwhile, Chiwetel Ejiofor plays the bureaucratic hero with the plan to save humanity, and Danny Glover plays solemn U.S. President forced to make tough decisions. Of course, we don't watch Emmerich movies for the ensemble of generic characters. No, we're here for the cacophony inspired by absurd end-of-times conspiracies and to witness grand, exuberant spectacles of pandemonium, which the blockbuster delivers in spades and remains good brainless fun.

For a more in-depth take on the film, check out our review of the 2010 Special Edition Blu-ray.

Sony Pictures Home Entertainment brings Roland Emmerich's 2012 to Ultra HD as a three-disc combo pack with a Digital Copy code. When redeeming said code via sonypictures.com/MAredeem or MoviesAnywhere, users are granted access to the 4K digital version in Dolby Vision with Dolby Digital Plus 5.1 audio. The Region Free UHD100 disc sits comfortably on the panel opposite a pair of Blu-ray discs: one BD50 containing the movie while a second BD25 accommodates the supplements. All three discs are housed in a slightly thicker than normal black keepcase with a shiny cardboard slipcover. At startup, viewers are directly taken to the standard menu option while motion clips play in the background. 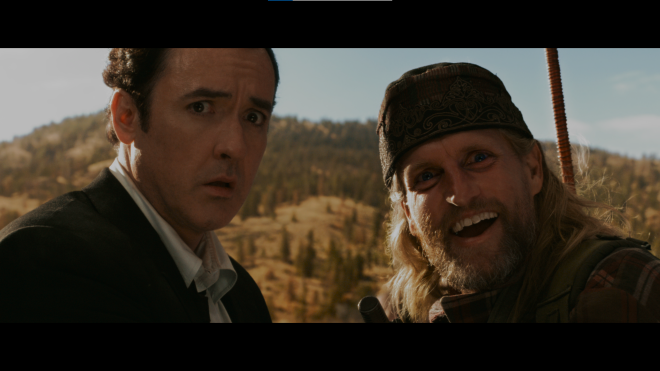 Emmerich's apocalyptic epic lands on Ultra HD looking like it went through a disaster yet managed to save itself with several bumps and bruises to show for it. Frankly, the HEVC H.265 encode is a bit of a mixed bag, boasting many appreciable improvements in some areas while also looking worse for wear in many others.

Likely coming from the same 2K digital intermediate used on the previous Blu-ray release, the upscaled transfer enjoys better resolution and definition overall, but it's not by a significant margin or comparable to some of the best we've seen of the format. Some of the fine lines and details in the clothing, buildings and vehicles are sharper and more distinct, to be sure, but there is also a great deal of softness and poorly-resolved moments as well. Granted, much of this is related to the CG visuals and easily excused as such, but the constant back and forth between appreciable uptick and the blurrier sequences is terribly distracting. Added to that, there are several instances of mild aliasing and visible jaggies along the sharpest edges in some scenes and a good chunk of the FX works, such as the destruction of L.A.

The same is unfortunately true of the contrast balance, showing a marked upgrade in several areas while others miss the mark. Overall, the action is more appealing, dynamic and energetic with cleaner, brighter whites throughout, particularly in the many outdoor sequences, such as when Harry and Tony are about to board the cruise ship or when Jackson meets Adrian at Yellowstone. However, there are also many occasions where the picture appears to be running too hot or pushed beyond the limits of the source, making several scenes look overexposed and somewhat cooked with blown-out highlights, a bit of clipping and some mild posterization. One such moment is again the Harry and Tony boarding scene, and it cuts to the ship rocked by a wave hitting the dock. The clouds in the sky are giant white blobs. Later, as Jackson confronts Charlie Frost just before Yellowstone erupts, we have the same overcooked, blown-out whites, causing some loss of image details. Thankfully, for a majority of the movie's runtime, specular highlights are actually quite strong, allowing for some finer aspects to peek through, but sadly, the aforementioned issues drag the picture's best aspects down several notches. 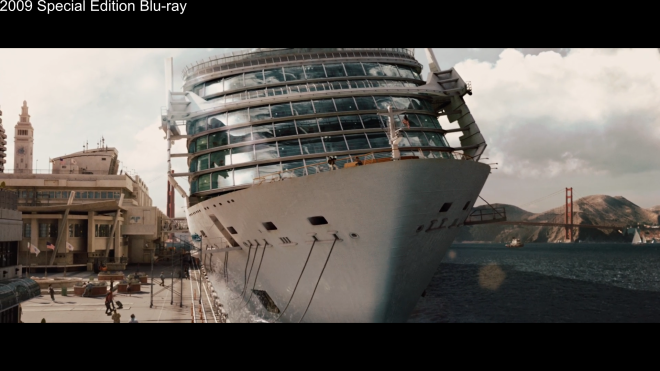 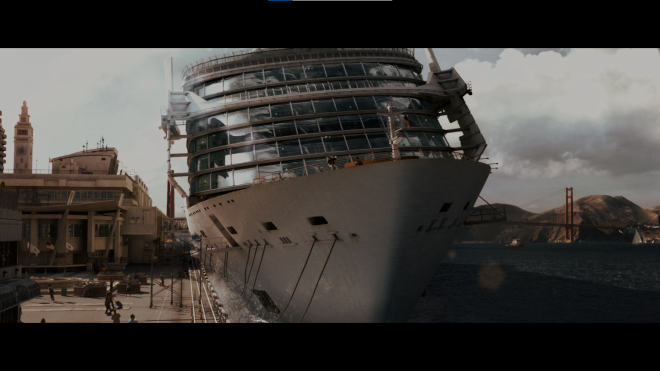 Similarly, brightness levels offer a notable upgrade although the 4K video is strikingly darker than its Blu-ray predecessor, casting poorly-lit interiors with unnecessarily heavy, murky shadows like the scene inside the chapel with President Wilson and Adrian. Thankfully, the inkier, raven blacks don't ruin the finer details, allowing for strong visibility within the darkest corners while also providing the 2.39:1 image with an attractive cinematic appeal.

Likewise, the cinematography benefits from the slight improvement in the colors. It's not a dramatic shift from its HD SDR counterpart, but the HDR10 presentation displays richer, fuller primaries with deeper crimson reds and vibrant cerulean blues, most notably in the daylight skies and the ocean water. Secondary hues don't show much more variation, but they nonetheless enjoy a welcomed boost, however nuanced it may be. Some sequences area awash in a warm, golden yellow hue, like those set at Yellowstone, and the orange in explosions, fire and lava are more amplified and animated, popping off the screen with intense saturation. Granted, this tends to make the action visuals seem a bit cartoonish, but it weirdly doesn't feel out of place for this silly thrill ride. Unfortunately, some hints of very mild banding in the CG, most noticeably in the opening sequence in space, also keep this 2160p picture from scoring higher. (HDR10 Video Rating: 72/100) 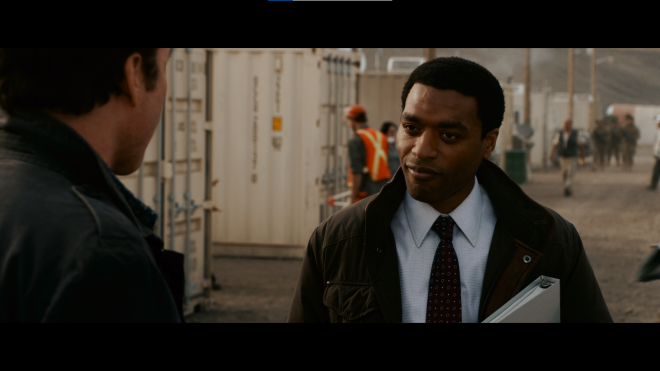 The sci-fi disaster blockbuster erupts in home theaters with a fantastically catastrophic Dolby Atmos soundtrack that exceeds not only expectations but its DTS-HD predecessor.

The demo-worthy mix is exactly what we'd expect of a summer blockbuster with spectacular apocalyptic visuals, encompassing the listening area with continuous, non-stop activity from start to finish. Whether it's the sound of an impending cataclysmic disaster or the birds chirping in the distance, ambient effects are sharply rendered and discretely move throughout the surrounds with great precision and enveloping directionality. The ceiling speakers are also frequently used for birds and helicopters flying overhead or debris hurtling down from above, panning flawlessly with stunning effectiveness and generating a phenomenally immersive hemispheric soundfield.

Meanwhile, the dialogue is perfectly balanced and very well-prioritized, never outdone by all the commotion and pandemonium. With background activity convincingly bouncing between all three channels and into the top heights, imaging is ceaselessly engaging and expansive, creating an awesome half-dome wall of sound. The mid-range displays a tad better warmth and detailed fidelity, pushing into the higher frequencies without fail or the slightest of distortion, displaying the destructive visuals with marvelous clarity and distinction. The musical score benefits from the extra-breathing room as well with slightly better separation and appreciable definition while also lightly bleeding into the heights.

Unfortunately, the one trivial nitpick mentioned in my Blu-ray review still persists and remains a negligible drawback, keeping this object-based mix from earning a perfect score. This slight limitation is an unconvincing low end, especially for such a loud popcorn flick, which is not to suggest that the bass is wanting or weak. On a positive note, it is accurate, quite robust and at times particularly punchy and bombastic for those selected scenes of explosive eruptions. And there are a few spots where bass digs below 20Hz, albeit at a low decibel level compared to the rest of a design that lingers largely in the mid-bass range. The point is that there's something about the lower frequencies that never truly feels persuasive or all-encompassing. Many on-screen events, particularly the earthquake sequences, appear to lack intensity and realistic force, which ideally should extend far into the room yet don't. Some viewers may not think this a major impediment, but for those who love their bass, it's a bit of a letdown and a missed opportunity for some truly amazing ultra-low frequency goodness.

However, this one small nitpick notwithstanding, this 3D audio mix is pure reference quality sure to be used for demoing one's sound system. (Dolby Atmos Audio Rating: 96/100) 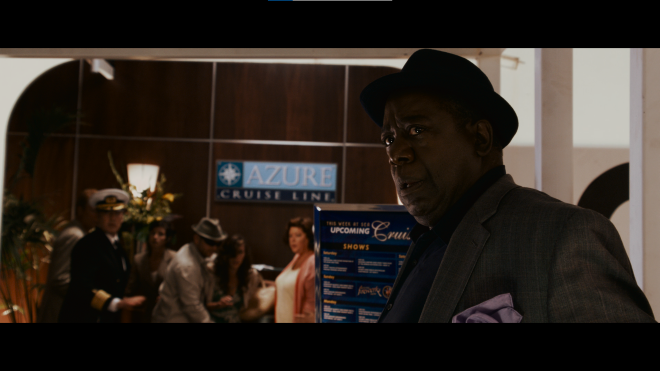 For this UHD edition of the movie, Sony adds one new supplement available on the 4K disc while the same bonuses are carried over on the accompanying pair of Blu-ray discs. 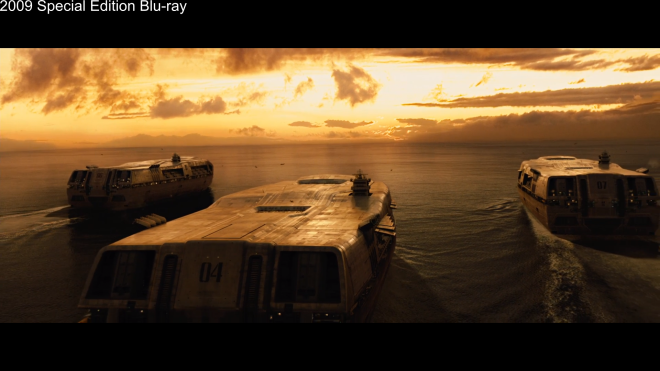 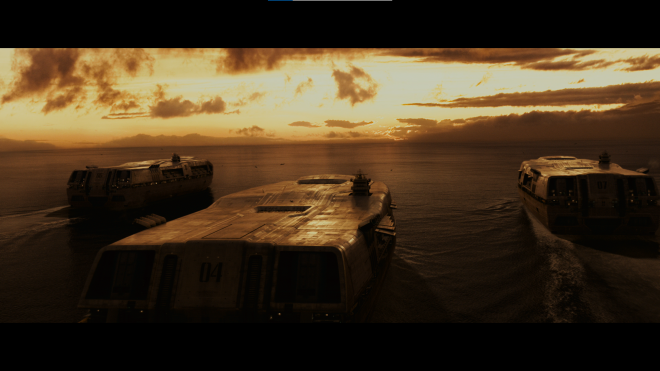 Roland Emmerich's 2012 delivers another large-scale, end-of-times apocalypse feature that wows with spectacular visuals and excites the imagination with an entertaining premise. The movie is pure popcorn spectacle that surprisingly works better than Emmerich's previous efforts despite the plot's implausibility. The sci-fi disaster blockbuster erupts on Ultra HD with a strong if not also somewhat disappointing 4K HDR10 video, but a demo-worthy Dolby Atmos presentation is ultimately the winner here, offering a notable upgrade over its lossless predecessor. Loaded with the same assortment of bonus features as the Blu-ray along with one new surprise, this three-disc UHD edition is worth a look for fans of disaster flicks with amazing audio.