Brandon Cronenberg aims to prove he's not just his father's son but a capable thought-provoking filmmaker in the realm of science-fiction body horror with Possessor. Contract killing has evolved to allow the assassin to take over the mind of an innocent person in order to get close and execute their target. When the best in the business gets in too deep on her latest assignment, she could be lost forever in the mind of someone else. Featuring excellent performances from Andrea Riseborough, Christopher Abbott, and Jennifer Jason Leigh - the film teeters preciously on the line of style over substance, but the haunting and often shocking imagery with this great cast keeps things grounded in a twisted version of reality. On 4K UHD Blu-ray from Well Go USA, Possessor arrives with a stunning Native 4K HDR10 transfer and a moody audio mix. Certainly not for everyone, but if you love slow burn horror sci-fi this might be up your street. Recommended.

Contract killing is a profession as old as time. A target is assigned, the assassin is paid for their services. The only thing that has evolved is technology. Tasya Vos (Andrea Riseborough)  is the best assassin in the world - only no one knows who she is. Through mind-control technology, Tasya can virtually manipulate a patsy assassin through a brain implant. She gets close to her target through the patsy, executes the target publicly, and then forces the patsy to kill themselves. Only problem is Tasya has been doing this for too long, and her level of control is slipping. As her boss Girder (Jennifer Jason Leigh) needs her for one last high-profile assignment, Tasya's control of the new patsy Colin (Christopher Abbott) is so fragile, Colin may actually be in more control than anyone realizes. 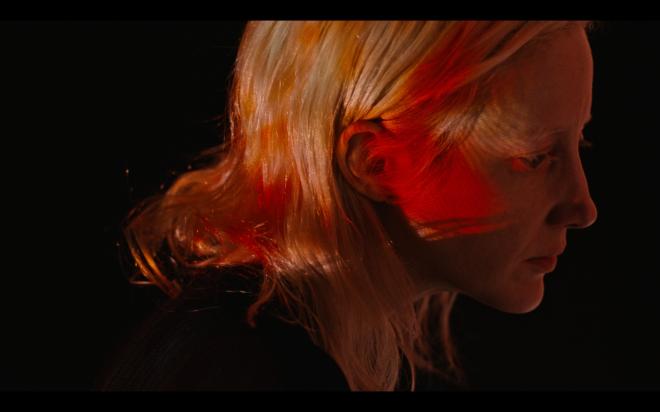 When the spawn or a relative of a particularly famous filmmaker takes a leap into the profession, it's nearly impossible to discuss one without mentioning the other. This is the precarious position we now face with discussing Brandon Cronenberg as a filmmaker without mentioning his iconic father and body-horror auteur David. With his second film - I particularly enjoyed Antiviral - Brandon once again takes up the mantle of body-horror science fiction only without the comedic sharp satyrical edge. Possessor is not a funny movie. It's actually a damn scary film and not just from the content but the world it projects.

At first, it's difficult to even lump this movie into the science fiction category. There's very little in this world presented in Possessor that is outwardly science fiction. Aside from the technology that Tasya uses as an assassin to take control of people - the only other indication of futurism is Colin's job - and it's not even that far off of current times. Throughout the film, there is an unnerving voyeuristic quality. Tasya watches and observes her future hosts mimicking their mannerisms before going under. But then when she's inside Colin, she discovers his job is to slip on a pair of VR glasses, log into a VR workstation and then tap into smart devices in peoples' homes and watch logging market research about the types of blinds and window coverings they have in their homes. Someone is always watching - and it's damn creepy.

Then we have the brutally uncomfortable depictions of violence to the point where the actions and inflictions of pain are almost fetishistic. As a viewer, a controller, Tasya is free of the actual physical responsibility of the violence she causes. She uses the host like a parasite to do incredible damage just to see what would happen. She's given a gun to make the deaths quick, but she goes above and beyond using other implements at her disposal. One of my favorite scenes of the film is when Jennifer Jason Leigh's Girder confronts Tasya about her previous mission and why she didn't simply just use the gun she was offered. The response is chilling and it sets the stakes for all of her conscious and unconscious actions within Colin's mind.

With that, Possessor is not a movie for everyone. It's a very languid slow-burn thriller and requires a lot of patience. There are some intensely stylized depictions of mental fragility that can feel a bit indulgent but rest assured that they fall into place in the context of the film's end. Without trying to compare his work to his father's, Brandon Cronenberg's Possessor reminded me a lot of Enemy - a person with a fractured mental state struggling for control of reality. Add in elements of Upgrade and a few other films that touch on ideas of mind control - willful or otherwise - and you have a template to prepare you for what Possessor brings to the table. Only it's still very shocking, grotesque, and one of the most haunting movies I've seen all year. This was a movie that took me a couple of days to reflect on, rewatch some scenes, and digest before I could write about it. I loved it. But I know it's a movie that will put off a lot of people so step into these waters lightly.

Possessor arrives on 4K UHD in a two-disc 4K UHD Blu-ray + Blu-ray set from Well Go USA. Both discs are housed in a standard black snapper 2-disc UHD case. Depending on where you purchase, this may or may not have a slipcover. My review copy didn't but places like DiabolikDVD indicated that it will - so food for thought if you like the cardboard sleeves. The 4K disc loads to an animated main menu with traditional navigation options. The included Blu-ray opens to other Well Go USA titles before arriving at a similar animated main menu. All of the bonus features are found on the standard Blu-ray disc.

Possessor arrives on 4K UHD Blu-ray with an often haunting and stunning native 4K HDR10 transfer. This is a bleak and drab and dour film throughout but it also features remarkable color usage. Primaries are used thematically to suggest fractured mental states - who is in control - who isn't. With that, there are numerous scenes where the entire image could be bold Blue, Yellow, or bloody red and really pop off the screen. The opening sequence is a terrific example of what to expect through the rest of the film with these thematic colors.

Shot digitally and finished on a 4K DI, this is a near picture-perfect, almost demo-worthy transfer. I stop short of calling it truly demo-worthy simply for the sake of the content of the film - not exactly the film to pull out at a party or family gathering to show off your setup! But, with that - it's beautiful. The use of practical effects over digital for gore or the sequence where Tasya melds into Colin's consciousness was done with melted wax shot and it's beautiful to watch. Facial features, clothing, and the amazing architecture on display all showcase notable detail gains over the 1080p Blu-ray.

Black levels are suitably inky and offer terrific shadows for a deep sense of image depth. Whites are bold without blooming. And when those whole scene splashes of color occur you can appreciate the color gradience within the yellows and blues and reds without the image simply being bathed in a post-production filter. This may not at all be a "happy" film, but it's gorgeous to look at and appreciate the intricate work that went into creating it. 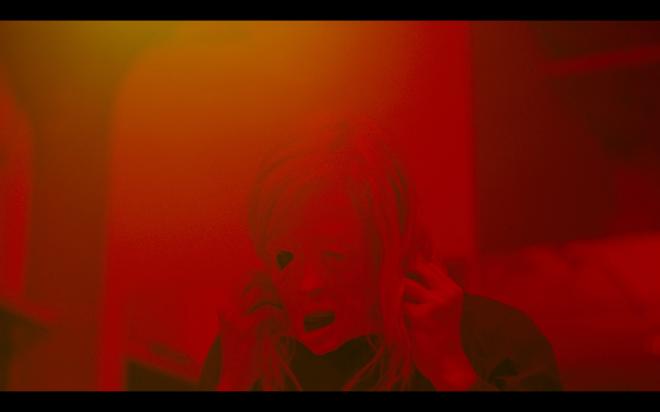 Possessor is also a damn good looking film in 1080p Blu-ray - although moving from the 4K disc to this was a notable shift in overall quality. This transfer allows for some appreciable details and you get a sense of the styling and intricacies of the photography, but it doesn't quite come to life without HDR. Skin tones and pigmentation are appreciable, as are textures in fabrics. Colors have some great pop and black levels are strong but there's a sense of softness where deep inky blacks took on a more brown/gray tone. I also picked up some ever so slight video noise here and there, but nothing too serious. Again this is a solid transfer, but after watching the film in 2160p with HDR it's difficult to recommend this one when the 4K UHD Blu-ray is absolutely the best way to go.

Both the 4K UHD and the 1080p Blu-ray discs offer a strong DTS-HD MA 5.1 audio mix. While Atmos or an object-based format would have been welcome, this 5.1 mix has some real muscles to it. There's rarely a quiet moment to the film without some sort of moody atmospheric sound effect or the brooding score by Jim Williams. There's almost always something happening to keep the channels engaged. Scenes where Tasya struggles with her control over the host often come with a low dissonant rumble in the subs to punch in the LFE nicely. Again this is a very rich soundstage, but the mix is never overpowered. Dialogue is clean and clear throughout and without issue from elements. One of the creepiest effects is when Tasya is talking to her boss, it's Christopher Abbott's voice mixed over with  Andrea Riseborough's and they're ever so slightly mixed apart from one another, left to right for a disorientating effect.

The bonus features package for Possessor covers a lot of the basic stuff, EPK style interviews and a few deleted scenes. Overall they're quality materials but I really wish we could have gotten a commentary from Brandon on this one, if not that a lengthy interview would have been great too. All of the bonus content is on the standard Blu-ray disc, and in traditional Well Go USA fashion, all of the bonus features will play through each other without having to return to the main menu.

Possessor marks Brandon Cronenberg's second feature film and it's a hell of an entry. It may be difficult for some to separate Brandon's work here from his fathers - they cover some similar territory - but the young filmmaker leaves his mark. This is a highly distressing sci-fi horror film that's well thought out with very purposeful pacing. It may seem languid in places and may revel in its style a bit, but it always has direction and drive. The performances are fantastic with Andrea Riseborough and Christopher Abbott often playing half of one fractured character. Not for everyone, but if you love brooding slow-burn horror this is a chilling entry.

Possessor arrives on 4K UHD Blu-ray and 1080p Blu-ray from Well Go USA in a two-disc set. The 4K UHD Blu-ray offers an amazing native 4K transfer with HDR10 that offers near demo-worthy material with a solid audio mix to match. The 1080p Blu-ray is a strong presentation but if you're rolling 4K, or thinking about upgrading in the near future, this is the set to go with. Recommended.