Slick yet gritty, exciting yet introspective, Collateral is a fascinating jumble of contradictions and one of director Michael Mann's most hypnotic and entertaining films. Paramount at last gives the 2004 thriller the 4K UHD treatment, which brings this atmospheric tale of a cool, calculating hitman (Tom Cruise) and the L.A. cab driver (Jamie Foxx) who reluctantly chauffeurs him to his victims into focus like never before. The lack of a Dolby Atmos track is a disappointment and somewhat diminishes the appeal of this release, but the excellent Dolby Vision / HDR10 video presentation definitely outclasses the standard Blu-ray and makes this edition of Collateral worthy of an upgrade. Recommended.

Five hits, one night. That's the agenda for Vincent (Tom Cruise), a professional assassin who crisscrosses the streets of Los Angeles in a hired cab, stopping only to methodically and ruthlessly bump off a lineup of predetermined victims about whom he knows little and cares less. With the grace of a cat and cunning of a stealth bomber, he slips in, takes care of business, and moves on to the next target. No remorse, no reflection.

Max (Jamie Foxx), the innocent driver Vincent hijacks, chariots him to various locations and unwillingly bears witness to the barbaric killing spree. Yet despite Max's continual efforts to wriggle free from Vincent's death grip, the two strangers become intimately entwined, sharing secrets and philosophies throughout the course of the long, exhausting evening, until a final, desperate showdown pits them against each other.

Punctuated by dazzling action sequences and laced with quiet introspection, Collateral stands as one of Michael Mann's best films. The atmospheric, often hypnotic thriller epitomizes the director's slick, elegant style that deftly weaves visual flash into a gallery of substantive character portraits. Though its story is simple and straightforward, Collateral resonates because its subtleties, especially when absorbed in repeat viewings, carry as much weight as its exciting action scenes and instances of shocking violence. 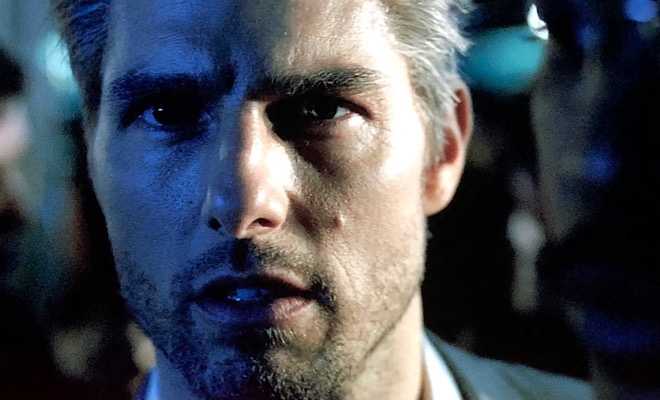 Mann and screenwriter Stuart Beattie employ the slow-burn approach, building tension a baby step at a time, and along the way allow us to recognize and catalog critical personality traits and tics. Combined with glossy and gorgeous aerial shots of the nocturnal L.A. cityscape and well-choreographed thrills (especially the finale aboard a mass-transit train), Collateral often becomes a heady mix that intoxicates the senses.

Long before Crash made it a gimmick, Collateral, on a much smaller scale, examines the impact of coincidence, and how strangers can float into our universe and change our ordered existence – for better or worse – in a nanosecond. Both Vincent and Max are "collateral" characters in each other's lives, yet in the timeframe of a few hours, each wields tremendous influence over the other. The same can be said for Annie (Jada Pinkett Smith), the young attorney who rides with Max just before Vincent flags him down. Though Collateral initially exudes a Taxi Driver feel (interestingly, Martin Scorsese was initially approached to direct the movie, but turned it down), it soon veers off in a unique and surprising direction, and almost everyone the two men encounter contribute interesting accents to the story.

Of course, the biggest hype element of Collateral was the casting of Cruise as bad guy Vincent. Never before had Cruise played a heavy, and the role – as well as the terrific salt-and-pepper look – suits him well. Actors with Cruise's heroic film pedigree often come off seeming artificial and histrionic when playing against type, but the megastar with the toothy grin and inimitable chortle embraces the ice cold Vincent with steely-eyed intensity, crafting a three-dimensional character who's much more complex and intriguing than the garden variety Hollywood villain. Despite the fact he kills people for a living, views his gruesome job with the same resignation and indifference as many 9-to-5ers, and holds the hero hostage for most of the film, it's difficult to truly hate Vincent, and such ambivalence fuels interest in the story. 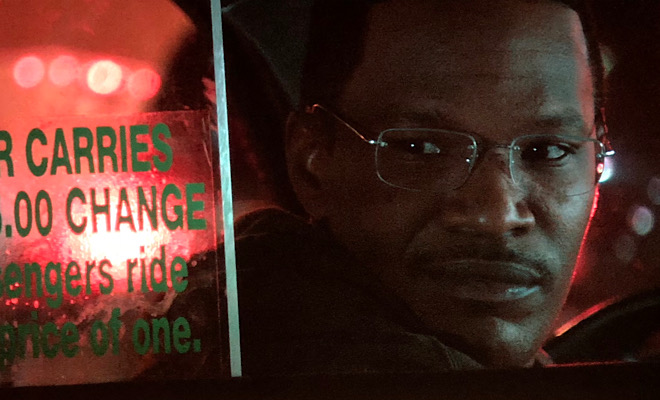 Collateral also ramped up the dramatic career of Foxx, and his fine work here, which earned him a Best Supporting Actor Oscar nomination, no doubt contributed to his Best Actor Oscar win for Ray, released later that same year. Much like Vincent, Max spends most of his work time as an invisible entity, and Foxx underplays well to achieve that difficult state of being. Ironically, it's Vincent who forces Max out of his shell and makes him take a long, hard look at his stagnant life. The mentoring ultimately will lead to Vincent's downfall, but Max, as played by Foxx, maintains his everyman status as he evolves from an inert witness to an active participant in a deadly game of cat and mouse.

Chemistry is also critical in what is largely a two-character piece, and Cruise and Foxx develop an excellent rapport that never feels forced or manufactured. As the third wheel who's an essential cog in the works, Smith projects her own classy blend of toughness and vulnerability, while Mark Ruffalo and Peter Berg, who represent the law, acquit themselves well in less showy roles. A glowering Javier Bardem also makes a strong impression in one brief scene and Jason Statham pops up in a blink-and-you'll-miss-it bit, "accidentally" bumping into Cruise when he arrives at LAX.

Like the start-stop nature of a taxi ride, Collateral guns its accelerator during its high-voltage action scenes, then slams on the brakes to explore delicate aspects of character. Yet somehow this tension-filled thriller never feels jerky, and instead exudes a cool smoothness of look and tone that keeps us engrossed throughout. Though much of Collateral is quintessential Michael Mann, even the director's detractors will find themselves seduced by this stimulating exercise, which is less self-conscious and more direct than most Mann films. 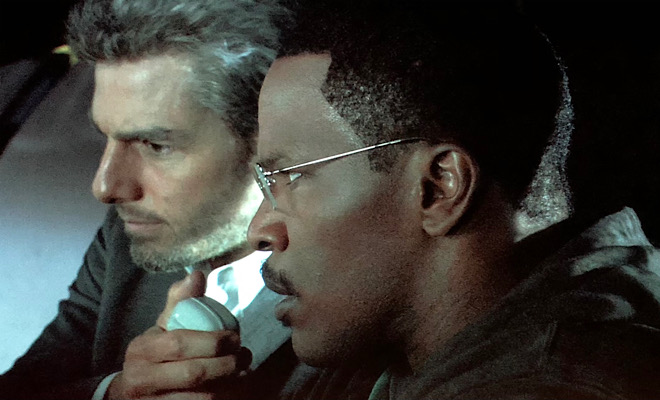 Collateral arrives on 4K Ultra-HD Blu-ray packaged in a standard clear case inside a sleeve. A standard Blu-ray disc and leaflet that contains the digital copy access code are tucked inside the front cover. Video codec is 2160p/HEVC H.265 and audio is DTS-HD Master Audio 5.1. Once the disc is inserted into the player, the static menu without music immediately pops up; no previews or promos precede it.

One might think the gritty, often grainy look of Collateral could prove problematic when upgrading the film to 4K UHD, but Paramount has done a superior job with this moody thriller's 2160p/HEVC H.265 transfer. Though at first glance the Dolby Vision / HDR10 presentation might not seem a whole lot sharper than its 1080p counterpart, it soon becomes apparent the ultra high-def rendering outclasses its predecessor by a fair margin.

Collateral's distinctive style remains unchanged. The sterile tone, cool colors, and rough, urban vibe pulse just as strongly as ever, but the image boasts a tad more sharpness and slightly richer hues, resulting in a more immersive viewing experience. The improvements are most pronounced in the close-ups. Cruise's grizzled beard is more defined, as are the pores and marks on Foxx's face. The lights of the L.A. skyline are crisper, the details in the techno club are better defined, reflections are clearer, and the shadowy, nocturnal photography looks a shade less murky. 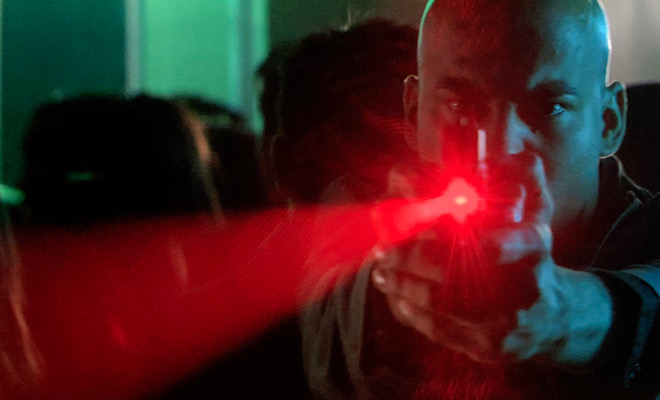 At the time of its release, Collateral was the first motion picture to predominantly employ high-definition video cameras, which allowed Mann to maximize as much natural light as he could while filming at night. As a result, an eerie beauty often laced with genuine creepiness fills the frame. The striking visuals make an even greater impact in 4K UHD, but there's very little eye candy on display...and that's the way it should be. Some bursts of color pop through now and then - Max's red and yellow cab, green foliage (often illuminated by streetlights), and the blue haze of the jazz club - but such cameo appearances can't eclipse the rich blacks, gleaming whites, charcoal grays, and harsh glares that consistently command our attention throughout. 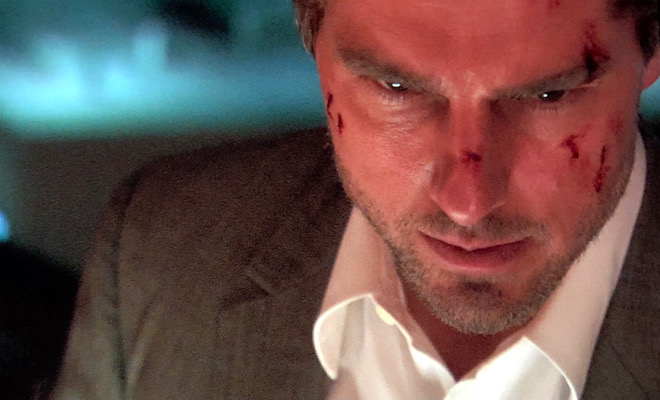 If you're a diehard Collateral fan, the subtle improvements of this Dolby Vision / HDR10 rendering are just notable enough to merit an upgrade. This is still the Collateral we all know and love...only more so.

Sadly, Paramount chose not to upgrade the Collateral soundtrack to Dolby Atmos, choosing instead to stick with the same (very good) DTS-HD Master Audio 5.1 track that resides on the Blu-ray disc. The addition of Atmos surely would have enhanced this release's appeal, and several audio effects, most notably the police helicopters scouring the L.A. cityscape late in the film and numerous planes landing at LAX, are well suited to the format. Most likely, the studio took an "if it ain't broke, don't fix it" approach to the film's sound, which is somewhat understandable, considering the DTS-HD MA 5.1 track certainly ain't broke.

As I wrote in my 2010 Blu-ray review of Collateral, the smooth, well-defined audio seamlessly manages the highs and lows, as well as severe level shifts, thanks to excellent dynamic range. Within seconds, Collateral can shift from whisper-quiet conversations and sedate street cruising to explosive gun battles and cacophonous action sequences, yet the mix is so solid, volume tinkering isn't necessary. Surround activity is faint at first, but when the rears kick in, the discrete effects add immeasurable ambience and weight to the film. The club scene's pulse-pounding techno music envelops with ease, while jets and helicopters make fine use of the track's directional capabilities. Gunshots and shattering glass possess attention-grabbing presence and strong bass frequencies provide some noteworthy rumbles. Myriad subtleties also come through well and clean silences ratchet up tension.

Dialogue is often spoken in hushed tones and occasionally mumbled, so at times it can be difficult to pick up. For the most part, though, it's easily understood, and James Newton Howard's elegant, understated score possesses fine tonal depth and good fidelity. On the whole, the track might seem a bit underwhelming throughout the first third or so of the film (when the audio is largely anchored in the front channels), but when it lets loose later on, we appreciate its breadth. It surely doesn't classify as demo material, but it's a solid effort that serves the movie well.

All the extras reside on the accompanying standard Blu-ray disc, which hasn't been updated since the original 2010 release. (The commentary track and trailer are also included on the 4K UHD Blu-ray.) Unfortunately, only the trailers are presented in HD.

Like the slick style of Michael Mann, Collateral makes a smooth transition to 4K UHD. The Dolby Vision / HDR10 presentation may not knock your socks off, but it's a definite step up from the standard Blu-ray and a meticulous rendering of a challenging film. A Dolby Atmos track would have made this release much more appealing (and earned it a higher overall rating), but sadly, there's no audio upgrade here. That said, the existing DTS-HD MA 5.1 track more than suffices, and all the Blu-ray extras remain. Even those who aren't Michael Mann aficionados will get a kick out of Collateral, which masterfully blends taut action with an engrossing story and possesses more depth than most movies in its class. Tom Cruise makes a terrific villain, and his excellent change-of-pace portrayal adds an extra layer of élan to an already stylish film. If you've got a 4K UHD setup, upgrading Collateral is definitely recommended.