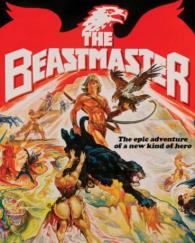 When he was a baby, Dar (Marc Singer, TV's 'V') was cursed by an all-powerful wizard named Maax (Rip Torn, Men in Black) to prevent him from rightfully ascending as the leader of his people. But the curse left him with a unique gift: the ability to telepathically communicate with all forms of animal life. But when Maax all but wipes out his tribe leaving Dar to fend for himself, he begins a quest of vengeance, accompanied by his animal friends, to Maax and end his reign of terror and violence. Directed by legendary genre filmmaker Don Coscarelli (Phantasm, Bubba Ho-Tep) and co-starring Tanya Roberts (Sheena), John Amos (Coming to America), and Rod Loomis (Bill & Ted's Excellent Adventure), THE BEASTMASTER is a thrilling mix of fantasy, action, and adventure, with touches of horror. Photographed by Academy Award winning cinematographer John Alcott (Barry Lyndon, A Clockwork Orange) and featuring incredible production design by Conrad Angone, Vinegar Syndrome Ultra brings THE BEASTMASTER to 4K Blu-ray and Blu-ray in a brand new 4K restoration!