One of the best films ever made - Tremors, has received the ultimate release from Arrow Video in an astonishing new package that included the film in a newly mastered 4K UHD image and over 10 hours of new and old bonus features, not to mention, posters, a book, and lobby cards with new artwork. This is what every movie release should strive for. MUST-OWN!

When I first saw Tremors in the theater back in 1990, Kevin Bacon immediately became my favorite actor. He wasn't the smartest of the heroes, nor was he the quickest or the strongest, but it was his average-Joe way of dealing with an unfavorable situation and coming out on top of things that won the day. It was a reminder of Bruce Campbell's character Ash from The Evil Dead series. The most likable element about Tremors isn't the monsters, but rather it's the characters. They're all very funny and absolutely crucial to the story, which makes this classic monster film still one of the best out there. 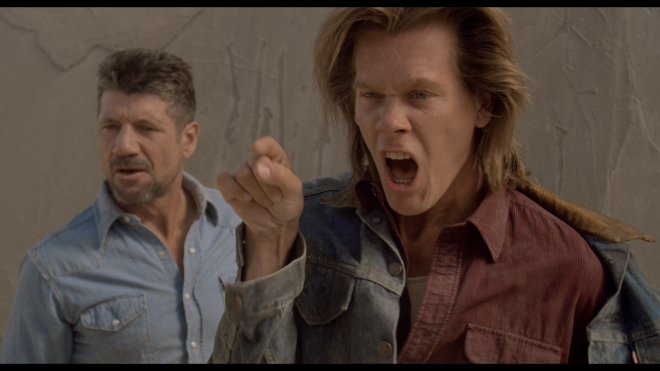 When Kevin Bacon is headlining a film right out of the 90s with Fred Ward, Finn Carter, Michael Gross (the dad from Family Ties), Reba McEntire, and Victor Wong (Egg Chen from Big Trouble in Little China), it culminates in a well-rounded film full of thrills, comedy, action, and fun, which is just a perfect storm of excellence still to this day as it was in 1990.

The film centers on a small rural desert town called Perfection, which is near Vegas. Two hillbilly handymen, Valentine McKee (Kevin Bacon) and Earl Basset (Fred Ward) are trying to make a quick buck by doing odd jobs around the area. As they're heading into town to see if any work needs to be done for the day, they stumble upon a graduate student named Rhonda LeBeck (Finn Carter) who is studying seismology and starts to record some very strange readings underground. Well a few people go missing and a few dead bodies are discovered, and then the aliens stick their ugly heads up from the ground and start attacking the townsfolk.

Eventually, the townspeople realize these underground giant worm aliens' "vision" is based on movement and vibrations from the ground. This sends the townsfolk to the top of their houses to avoid making any noise. With the help and ammunition from Burt and Heather Gummer (Gross and McEntire), the townsfolk seem safe, but when the aliens start destroying the houses, they all decide to make a run for the hills, which ends in one final showdown.

One aspect that is loved about this movie, is that none of the characters are as stupid and brainless as initially led to believe. Instead, once they all learn about these ferocious creatures, they start planning and thinking about their fight for survival in a calculated way. The dialogue is hilarious and is still quoted today amongst cult film fans. The acting is fun and at times over-the-top, but oddly, never cheesy. Most of these actors are remembered for their roles in this film and for good reason.

The camera work is pretty spectacular as it mixes in some good horror movie pans and even pays homage to Sam Raimi's Evil Dead now and again. Tremors have everything any movie fan would want in a film, being genuine thrills, scares, a romance, great practical special effects, a wonderful cast, fun monsters, and tons of laughs. This is one of those rare films that never gets old.

Arrow Video grounds Tremors to 4K UHD in a two-disc set. The discs are housed in a hard, black, plastic case with a hard cardboard cover, featuring new artwork of the film. The 4K case itself has the same artwork, but reversible art of the original poster of the film. There are posters, lobby cards, a coupon, and a 60-page book included as well, which is described in detail below. There is no 1080p Blu-ray version or digital code included. 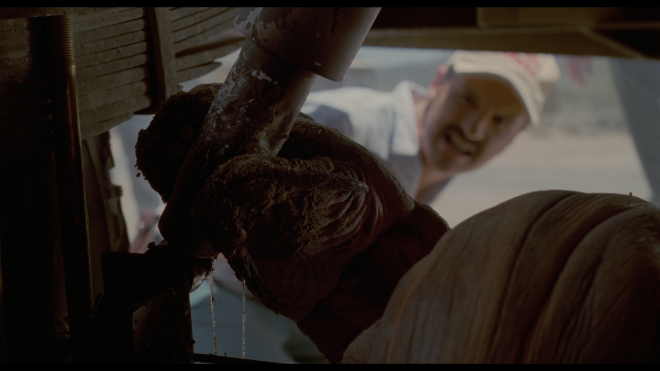 Arrow Video brings Tremors to 4K UHD with Dolby Vision and HDR in a new 2160p transfer and in a 1.85:1 aspect ratio. This is the ultimate way to watch this iconic film by far, as it surpasses the previous releases in its visual presentation. Arrow spared no expense in delivering a tip-top visual performance on 4K with upgrades in the detail and color palette.

The entire image looks more natural this time around while looking crisper, cleaner, and keeping with its nostalgic filmic roots. The colors are all more organic and a bit more nuanced in this dry, dusty desert setting. The green little plants and shrubs showcase a fantastic array of different greens that contrast nicely with all of the sandy browns, yellows, and oranges that litter the scenery in the background. This is all complemented by a nice blue sky above.

The town of Perfection has that rustic, old ambiance with worn-down wood that is painted red amongst other primary colors. The blue jeans and red wardrobe look excellent as well here. The graboids themselves have significant orange blood that oozes perfectly out and looks bright and bold when spewed out. Black levels are deep and inky always and the skin tones are always natural. The film grain is intact and can fluctuate at times, but it feels natural and keeps with its original ascetic. Nothing seems harsh or overly done.

The detail is impeccable, now being able to see the rubbery lines in the graboids, along with their skin textures and fluids that spill out from time to time. Facial features on the actor's faces look incredible with facial pores, individual hairs, and textures in the wardrobe standing out nicely. Wider shots look incredible as well, never giving way to softer spots, but instead, some crystal clear locations and props in the background. There were zero instances of any video problems like aliasing, banding, or other video noise, making this the ultimate way to watch Tremors. 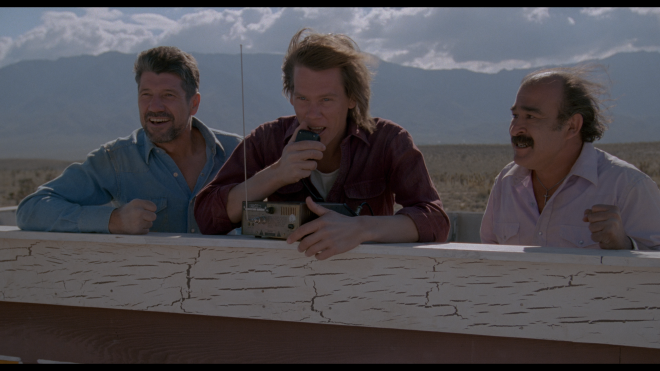 This release comes with a few different audio options, including a DTS-HD MA 5.1 track, a 4.0 mix, and a stereo 2.0 option.

All of them sound wonderful, but the favorite is the 5.1 track, which has been featured on previous releases. The 5.1 track is boisterous and loud when it needs to be. The sound effects of the graboids traveling underground are loud and move smoothly from one speaker to another. The explosions and gun blasts all sound great and come with a nice punch. It's not as loud as a Michael Bay film where it could pierce eardrums, but it's a fantastic sounding effect that has a nice low end of bass with rumble.

Ambient noises in the desert, such as wind, shrubs rustling or water dripping from the water tower all sound great and full. The rear speakers have enough noises to make the soundscape immersive too. Dialogue is clean and clear and free of any audio issues. The 4.0 and 2.0 options all sound great as well, but it lacks the bigger oomph that the 5.1 track comes with. 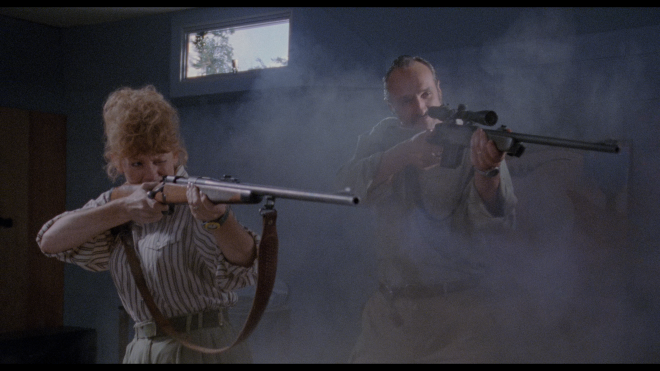 A whopping 633 minutes of bonus features are included here. That's over 10.5 hours of bonus content, plus two commentary tracks.  There are tons of new extras and most of the older bonus features from previous releases. All of the extras are remarkable and some of the best extras. This should be the standard for all home video releases. There are posters, lobby cards, a coupon, and a 60-page book included as well.

Tremors is still one of the best films to ever be released in theaters or home video. Full Stop. It continues to be as fun now as it was back in 1990. It's the perfect movie. Arrow Video should win an Oscar for this amazing release. The video and audio presentations are both phenomenal, the bonus features are simply amazing, grande, and made extremely well. Lastly, the new packaging, artwork, and bonus schwag are excellent and will satisfy any fan of the film. MUST-OWN!