Over 30 years later, Eddie Murphy's Coming To America remains a comedy classic. With John Landis at the helm, Murphy and Arsenio Hall play to the classic fish-out-of-water trope, but with a lot of heart, wit, and plenty of great jokes. Just in time for the sequel, Coming To America gets a terrific new 4K UHD Blu-ray release from Paramount. The new native 4K transfer with Dolby Vision provides a striking improvement over the previous lackluster 1080p Blu-ray releases along with a new robust audio mix to match. If you're a fan of the film this is an easy one to upgrade for. Highly Recommended.

Read our review for the 30th Anniversary Edition from 2018

African royalty Prince Akeem (Eddie Murphy) has lived his entire life never having to do anything for himself. He doesn't brush his own teeth. He doesn't tie his own shoes. His father King Jaffe (James Earl Jones) has even employed Royal Wipers for when Akeem has to attend to personal business. On the evening he's supposed to meet the woman trained since birth to be his bride, Akeem convinces his father to let him go on an adventure to see the world with the secret quest to find a woman to be his wife that would stimulate his intellect... as well as the rest of him. With his friend Semmi (Arsenio Hall), Akeem travels to the one place in America perfect for finding his bride-to-be - Queens, New York. 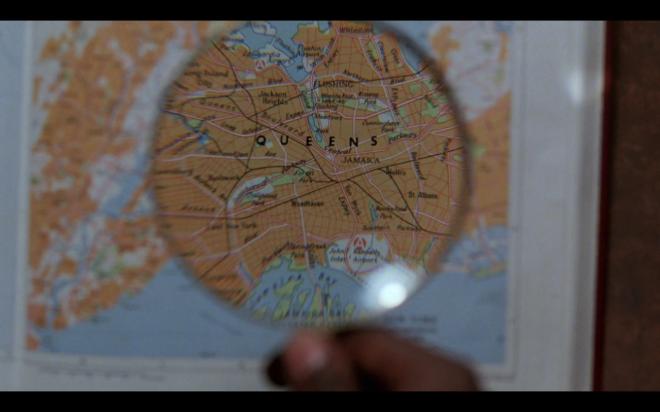 Coming To America is a genuine classic comedy. It also happens to be one of Eddie Murphy's best. Made right after The Golden Child and the troubled post-production that saw Paramount Studios blink and force more comedic reshoots, Murphy had complete creative control over this one and it shows. With a Producer and Story By credit, his name is all over this film playing to his particular comedic cadence and personality. With some excellent Rick Baker makeup, this is also the first time we see Murphy pull out the multi-character performances that would permeate his later family-friendly 90s movies.

With that, it was because of the PG-13 friendly The Golden Child that my mom actually started to let me watch Eddie Murphy movies. As I mentioned in my review for the Beverly Hills Cop Trilogy Blu-ray set, I wasn't allowed to see those movies. I was actually allowed to rent Coming To America and got to see it... for about five minutes. Once it got to the bathing scene my mom quickly ejected the tape. I mean, I get it, I was 6 when this movie came out, but my mom held fast that Murphy's movies were off-limits unless they were on broadcast TV and edited. That's actually how I finally got to see this movie. Watching it unedited all these years later it's hard to imagine what was left to show on television.

While I wouldn't call this my favorite Murphy movie, I do hold to the opinion it's one of his best. Looking back at it you can see his career trajectory spiraling out from this movie - for better or worse. He was willing to try new things and pull himself in new directions. The Adventures of Pluto Nash would probably not be one to highlight, it's not a good movie, but you can see with that film Murphy was trying to get out of his usual comfort zone and play a new kind of character. With Coming To America, Murphy managed to play a bunch of characters while also showcase he could create a comedy with a crass sense of humor that also had maturity and heart working for it. This movie may be directed by John Landis, but this is Murphy's show.

Coming To America arrives on 4K UHD Blu-ray in a single-disc 4K UHD Blu-ray + Digital set from Paramount. No 1080p Blu-ray is included. The disc loads to a language submenu before arriving at a static image main menu with traditional navigation options. The included Digital code is not Movies Anywhere compatible and as of this writing does not unlock a 4K UHD streaming copy on either VUDU, FandangoNow, or AppleTV.

Sporting a new native 4K transfer with Dolby Vision HDR approved by John Landis, this new release of Coming To America simply blows away any previous Blu-ray release. When this film came to Blu-ray I just never felt the need to upgrade. The picture was only a modest improvement and the audio was rather flat and muddy (good news there's a new audio mix too!). This new transfer is full of color and life from the moment the camera flies past the Paramount logo. While I was impressed overall with how Beverly Hills Cop turned out, of Paramount's Eddie Murphy holiday releases, this really is the most notable apples to oranges noteworthy improvement from 1080p Blu-ray to 4K.

Film grain is apparent but never overly noisy or intrusive. It really only stands out during the opening credits and any optical effects shots. Throughout the rest of the film, the grain structure remains organic giving a proper film-like appearance to the image. In turn, details are incredible. Facial features, skin pigmentation, and characters gain a notable uptick, but the impressive costume design work really comes to life. The juxtaposition from the ornate palaces of Akeem's African kingdom to the dirty rough apartment they secure in Queens is even more appreciable.

The Dolby Vision HDR grading is spot on allowing that shift in color scheme to roll with the film. The bright pink walls and lush greens of the palace to the stark yellow. browns and deep reds of winter in New York help you appreciate those vivid details. Once the film moves to New York you also see all of the different characters Murphy, Hall, and other cast members played and the Rick Baker makeup is really impressive for the era. Black levels are deep and inky with excellent shadows allowing for terrific image depths while whites are bright and crisp without blooming. All around another excellent 4K transfer from Paramount for an Eddie Murphy classic.

In another improvement for fans of this film, Paramount finally did away with the muddy and unimpressive Dolby Digital 5.1 mix and opted for a new lossless DTS-HD MA 5.1 mix that really opens things up. From the get, it just feels more sonically aggressive. That opening music that's just so chill and pleasing really opens up through the channels pulling you into the film. The dance ceremony is a big highlight as is the moment Akeem and Semmi arrive in New York, the sound of traffic, people milling about, and other random scene-setting atmospherics feel like they have a lot more punch with a more immersive presence. Scoring is spot-on throughout. Dialog is clean and clear. Levels are on point without any need to adjust. This mix easily leaves the old track behind and a worthwhile upgrade.

Since there isn't an included 1080p Blu-ray, all of the old archival bonus features from past releases are included on this disc. It's a shame there wasn't anything new supplied for this film, but thems the breaks. It's better than having nothing at all but still - a new retrospective would have been great since Coming 2 America is set to arrive in 2021.

The 1980s was a great decade for Eddie Murphy. From movies like 48 Hours to Trading Places to Beverly Hills Cop, the comedy superstar had one hit after another. Coming To America is another such 80s classic. Combining the terrific direction of John Landis, the exceptional makeup effects of Rick Baker, as well as Eddie Murphy's amazing talents creating funny and relatable characters, this gem remains one of Muphy's best. I don't often get to sit down and watch this one, it's one of those I don't want to be interrupted when watching, but I'm always happy when I find the time to properly reconnect with it. It's hilarious from start to finish and now with a new 4K UHD Blu-ray release from Paramount, fans have a real reason to pick this one up again. The new 4K transfer is terrific and the film also finally gets a much-needed upgrade in the audio department. At the end of the day, it's impossible not to call this one Highly Recommended.