Spaceballs the VHS, Spaceballs the DVD, Spaceballs the Blu-ray - Mel Brooks fans, we now have Spaceballs - The 4K Ultra HD Blu-ray! Lone Starr, Dark Helmet, Barf, Yogurt, Princess Vespa, Dot Matrix, President Skroob, and all of the @$$holes aboard SpaceBall One have never looked better on home video. While not specifically the best comedy of Brook's long hilarious career Spaceballs holds up beautifully giving plenty of laughs. Kino Lorber Studio Classics delivers a first-rate disc with an excellent native 4K transfer with Dolby Vision HDR with a new remastered 1080p Blu-ray and loaded with extras. A pure silly delight, this latest and greatest release of Spaceballs is Highly Recommended

Note: All images were captured from the 2020 remastered Blu-ray. When we can we'll update with images from the 4K disc.

The stinking spiteful Spaceballs have depleted their atmosphere. Their leader, the deranged and beaming-challenged President Skroob aims to steal all the air of the peaceful planet Druidia. In order to do it, they need the combination to the air shield and so on the day of her wedding, the evil Dark Helmet (Rick Moranis) kidnaps the beautiful Princess Vespa (Daphne Zuniga) and her trusty robot Dot Matrix (Joan Rivers) to force her father's hand. Only the brave and financially strapped Lone Starr (Bill Pullman) and his mog Barf (John Candy) can save the princess - and the galaxy!

Growing up in the 80s, Spaceballs was a staple of the video store diet. Due for a sendup - Mel Brooks took aim at the Star Wars franchise. While maybe not as sharp and as witty as some of his previous efforts, the film shoots at the entire sci-fi genre rather than a single franchise. There are moments where it can feel a little scattershot, some of the jokes clunk to their punchline, but when it hits big the movie's on fire delivering one memorable line after another with great belly laughs to be had. We maybe didn't need an Alien sendup, but we got a great appearance for John Hurt making it worth the stretch.

As a kid, it took a long time for my mom to let me see Spaceballs. As an adult I can understand how she'd be worried about all of the sexual innuendoes - the size and shape of Dark Helmet isn't just a knock on Darth Vader - but I was way too little to pick up on that. As with Young Frankenstein or Robin Hood Men In Tights - I just thought Spaceballs was a funny movie. And I still think it's a damn funny movie. But as an adult, there are a lot of jokes that get funnier once you hit a few age milestones.

One of the best gags to me is the Merchandising sketch with Mel Brooks golden sage Yogurt. "Spaceballs the flamethrower! And Spaceballs the doll - me" With Disney's acquisition of Lucasfilm, we just finished a new trilogy of Star Wars movies of varying quality overstuffed with merchandising from cereals to lunch boxes to action figures that cost half your paycheck. Now with The Mandalorian, folks can buy their own life-sized figure of The Child for their home. We haven't gotten a Mandalorian Flamethrower yet… but I admit I'd want one should it come available! 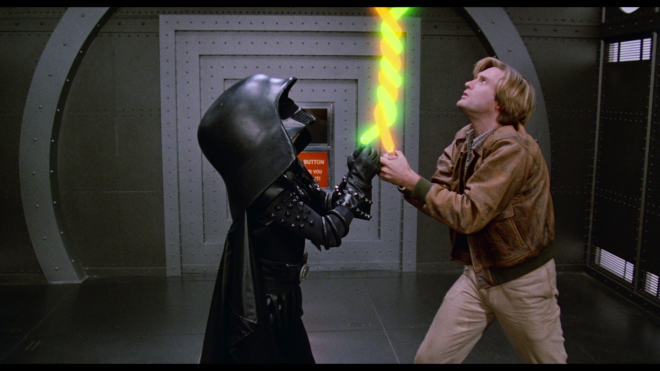 With this latest viewing, the gag that dropped me was the Mr. Rental Instant Cassette. "They're out in stores before the movie is finished!" Living through the long long ago of the way back when, you used to actually have to wait upwards of a year for a movie you saw in theaters to make it to the rental store. Today, we have HBOMax and their day-and-date streaming availability with theaters. With other studios signaling an intention to follow that model or a version of it and the marketing of new releases starting long before a film has actually even been filmed - we're practically there.

With Brooks doing what he does best, he pulled together a terrific cast to fill out his stage of players. Bill Pullman has always been a great guy to have in a movie ably swinging out jokes or playing things deadly serious. Just a year after Spaceballs he headlined Wes Craven's chilling The Serpent and the Rainbow. Daphne Zuniga played bitchy-privileged perfectly right down to her matched luggage. The always lovable and forever missed John Candy was everybody's best friend as Barf. Only Rick Moranis could knock down one of cinema's greatest villains as the over-compensating inept Dark Helmet. Mel Brooks got to pull double duty as Skroob and Yogurt and was in his element with both characters. Throw in turns from DIck Van Patten, voice work from Joan Rivers, George Wyner, and a brief but damn funny bit with Michael Winslow and this flick is just a fun film. Maybe not perfect, but most of the time this is a damn funny movie that delivers the laughs. 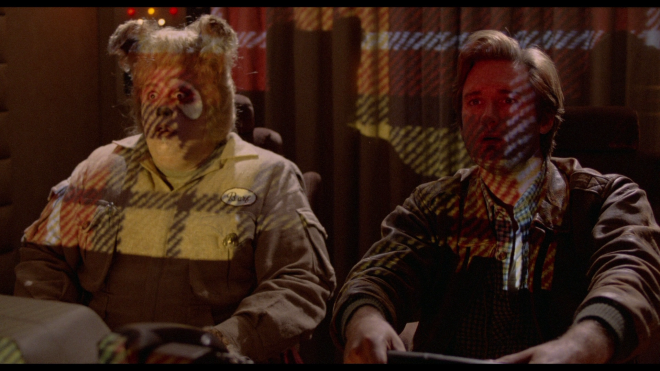 After being available on streaming in 4K for a little over a year now, it's great to see Spaceballs on a 4K UHD Blu-ray disc. The 1.85:1 2160p native 4K transfer with Dolby Vision HDR (and HDR10) gives this simple comedy a terrific presentation. While I wouldn't put this as top-tier reference-quality against some of the best catalog releases out there - against its own past home video releases it's the clear and obvious winner. Looking at this set's own 4K disc and remastered 1080p, you can still enjoy notable improvements in clarity with impressive details for costuming, facial features, pizza features, and mog hair. Film grain is nice and natural without being too intrusive - optical effects shots like the introduction to Lone Starr is still heavy and struggles a little, but that's been a baked-in issue since the beginning.

With Dolby Vision HDR employed colors enjoy a lovely boost. Primaries sparkle with bold reds, blues, and yellows. The glow of the Schwartz battle between Lone Starr and Dark Helmet is a fine example of ridiculous color application! Skin tones are nice and healthy. Previous home video releases always felt too bright giving the cast an overly pasty appearance. Black levels and whites are also in much better shape. Again some of the optical effects with black costuming against black backgrounds still struggle but don't look nearly as crushed out as before. Whites are bright and crisp - those Spaceball helmets never looked better or brighter! 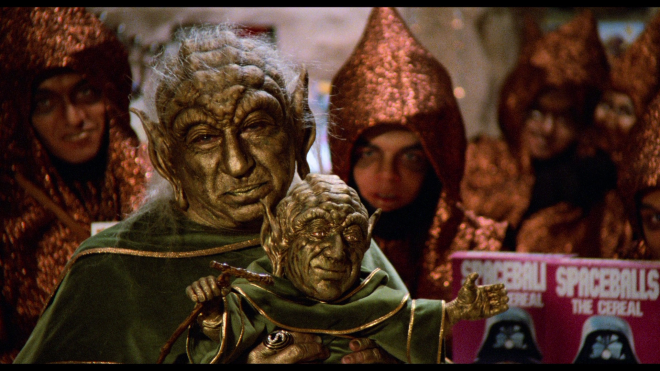 Having this on 4K digital on Both VUDU and Apple - I would argue this disc offers a better presentation overall - especially over the VUDU 4K with HDR10. Flipping between this disc and that streaming version I felt the HDR10 just looked too dark. Colors didn't pop the same way and whites of the helmets - like the hilarious "@$$hole" sketch" - just didn't gleam the same way. The Apple 4K with Dolby Vision is virtually identical. The edge I give this disc is it had a better feel of image depth and handled the deep blacks better. Both streaming versions displayed some blocking with the deep shadows and black levels that the disc easily managed. 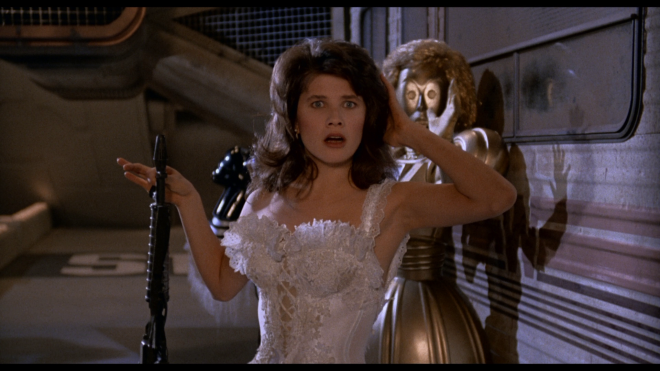 This 4K UHD Blu-ray release of Spaceballs arrives with what sounds like the same DTS-HD MA 5.1 audio mix that was used for the previous Blu-ray. Flipping between all three discs, the old Blu-ray, the new Blu-ray, and the 4K disc - I didn't notice any differences. The more notable upgrade comes with the updated DTS-HD MA 2.0 track that sounds much more present and stronger overall than the previous Dolby Digital 2.0 track - it feels like there's more oomph to the sound effects and a little more life in the dialog. Dialog for both tracks is on point. That's the main focus of the film. Sound effects are decent enough and there's still some good surround activity, but most of the time this movie is front/center focused and that's where the bulk of the channel activity remains. You can't go wrong with either mix really. They're both great and do their jobs. 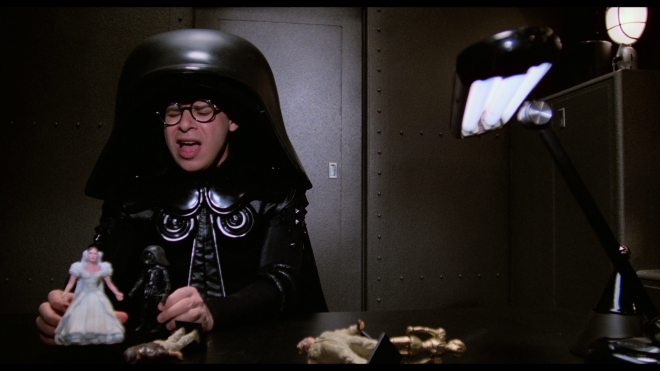 The 4K UHD Blu-ray disc only offers the Mel Brooks audio commentary. The rest of the bonus features for this set are found on the 1080p Blu-ray disc. None of these bonus features are new. Everything that is here has been available on previous DVD and Blu-ray releases.

With 11 feature films under his belt, Mel Brooks' remains a comedy genius. Against the likes of The Producers, Blazing Saddles, and Young Frankenstein - Spaceballs is probably his fourth-best film. The satire may not be as sharp as those other three films, but like Princess Vespa after her hair gets shot, the film hits more gags than it misses with some true gut-busters.

Kino Lober Studio Classics delivers Spaceballs - The 4K UHD Blu-ray with excellent results. The native 4K transfer is better than any previous home video release and coupled with Dolby Vision HDR looks fantastic. Add in the same solid audio mix and all previous archival bonus features and you have a great disc giving fans a genuine reason to upgrade their collection or purchase for the first time. If you're a fan, don't be an @$$hole and miss this shot. Highly Recommended.