V For Vendetta masks up for its 4K UHD release that is based on the Alan Moore comic from the '80s that follows a young woman living in a totalitarian future where she befriends V, a masked anarchist looking to take down the government. The 4K Disc is HDR enhanced and has a Dolby Atmos track that is magnificent, along with the old bonus features from the previous Blu-ray release, in addition to about 54 minutes of brand new material. This movie is as relevant as ever and is more important than maybe any other movie in the world on its release date of Nov. 3, 2020 - Election Day. Highly Recommended! 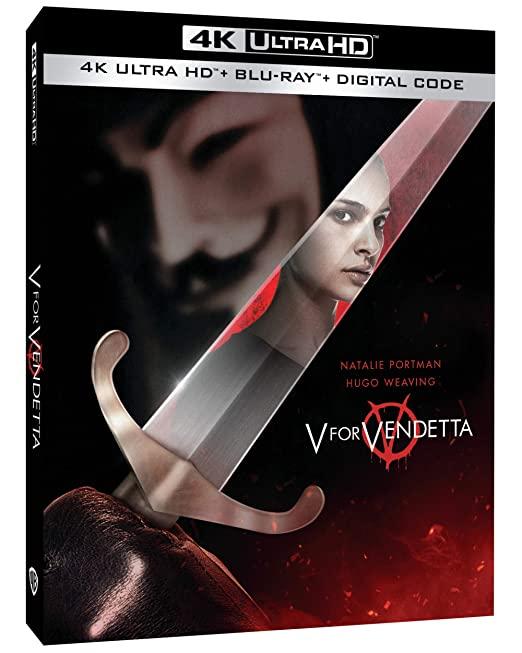 After the success of The Matrix Trilogy, The Wachowskis took on the iconic 1988 comic book V For Vendetta by Alan Moore (The Watchmen) and David Lloyd, adapting it for the big screen in 2006, and giving their assistant director on The Matrix movies James McTeigue the role of director. This story was written in the '80s and took place in the UK under the Margaret Thatcher government. Being made in 2006 for the mainstream world, certain differences for the adaptation from page to screen was taken much to the dismay, of course, with Alan Moore who prefers a 100% faithful adaptation of his work each time.

The film version was made during the George W. Bush administration and drew up some strong parallels with that era, but as of 2020, V For Vendetta rings even louder and is quite disturbing in its many similarities to the current climate of the United States with all of the police brutality, curfews, and quarantines that have happened this year, not to mention the on-going push for a totalitarian regime that is actively wanting and pushing for the death of many people by spreading lies and misinformation to the mass public. It's extremely frightening to see just how far ahead of its time V For Vendetta was with its subsequent book and movie releases.

The film is set in the very near future in Britain, which has been upheaved by a totalitarian government, led by the High Chancellor Adam Sutler, who is the founder of a political party similar to the Nazis. The citizens are under a strict curfew and are being fed lies and fear in order to stay home and accept whatever the government tells them. Meanwhile, Evey Hammond (Natalie Portman), an employee of the state-run news station is attacked by the police, where she is saved by V, a polite man in a Guy Fawkes mask who is a highly-skilled anarchist, looking to take down, destroy, and exact revenge on the government who experimented on him, leaving his body disfigured when the party took control.

These two help each other out by dismantling the highest political party members one-by-one, by way of blowing up buildings, hijacking the news, and exposing the horrifying deeds of the government, and asking the good citizens to stand up on the 5th of November and demand justice, fairness, and freedom - something that is all too real and relevant today, including the exposed religious leaders who sexually prey on young people, violent law enforcement, heavy censorship of all forms in the media, and the evilness of a dictatorship.

Now even though McTeigue is billed as the director here, it's very evident that The Wachowski's had a heavy influence with its style, camera-work, and story-telling that is reminiscent of their previous Matrix movies. The action sequences are visually striking with that Wachowski stamp on it, along with some very deep and meaningful conversations in between. It's not a bad thing either, but the attention to detail in the set design, costumes, and actions are remarkable.

Natalie Portman went the full distance with her performance and physical appearance in shaving her head for the role, and she is very good with her struggle as the Evey character, despite her British accent that goes in and out from American to British. Hugo Weaving (The Matrix, Lord Of The Rings) was an excellent last-minute choice for V as well, narrating the entire film with his impeccable accent and delivery. V For Vendetta still holds up today and is as relevant and true as it was some 35 years ago, which is actually truly horrifying.

V For Vendetta plots its way to 4K+Blu-ray+Digital Copy inside a great looking standard case. The discs are housed in a hard, black plastic eco-friendly case with an insert for the digital code. This is encased in a cardboard sleeve with some new artwork of V and his dagger covered in blood. The plastic case itself has different amazing artwork consisting of Natalie Portman's character. 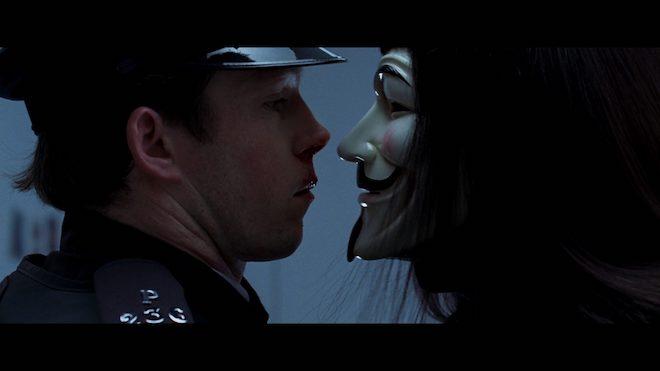 V For Vendetta comes with a brand new 2160p UHD transfer that is HDR10 enhanced that was made from the original camera negative. The colors are bolder and deeper this go-around, then they were on the 2008 Blu-ray release.

Visually speaking, The Wachowskis kept with the black, gray, and red palette throughout most of the film which signified an almost colorless life under the totalitarian regime in the story.  Most of the film looks icy cool with the very minimum of warmer colors. Gray buildings and interiors of offices are lifeless with the occasional bright fluorescent white light that sucks out any beauty. Now when in V's quarters or in the homes of some of the civilians, warmer colors of amber, orange, green, and brown are evident and look amazing. The HDR upgrades the black levels significantly as a lot of the movie is shot in shadow and darkness. The shadowy V is extremely inky in each low lit scene with virtually no bleeding or murkiness when he creeps behind the shadows. His outfit contrasts nicely with his Guy Fawkes mask with the eggshell off-white coloring and pink rosy cheeks that looks amazing. And the red blood that flows like a nice deep, red wine looks exquisite and it spews out of each victim.

The detail is sharp and vivid throughout as well with individual hairs, facial stubble, and wardrobe textures shining through, even in the darker sequences. The CGI effects still look good as well and never really go soft due to the dark nature of the film. Wider shots of the city and even the big explosions of red and orange fire look extremely detailed with each flame and burst making a significant impact. There is still a very fine and wonderful layer of film grain, keeping with the aesthetic and filmic quality of the movie, as well as zero instances of any video related problems such as aliasing, banding, and video noise. This is a top-notch video release with HDR from Warner Bros. 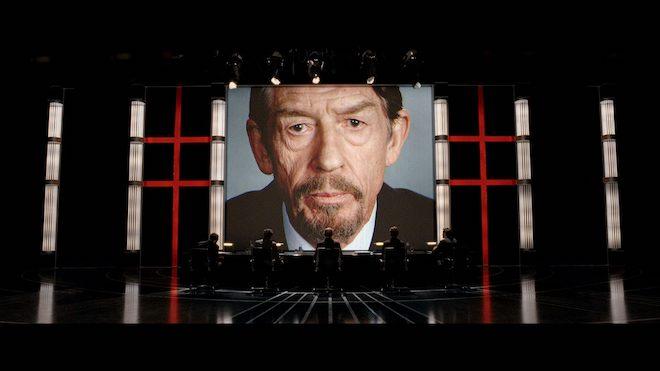 This release comes with a new Dolby Atmos track that is simply phenomenal on all levels. The track transitions automatically to Dolby TrueHD 7.1 for those not equipped with the Dolby Atmos setup.

The sound effects are robust and loud on all accounts with a hefty low end that brings in a powerful punch. Every knife stab, gunshot, and physical altercation sounds wonderful with some great directionality that flows smoothly across all speakers. The giant explosions and fireworks display have a tremendous rumble to it that should give the walls and floors a good shake, but that never crosses into rocky territory or becomes overbearing.

The atmospherics are great as well with the necessary and wonderful reverb inside large rooms or abandoned subway stations where even the quietest conversations can sound bold. The height speakers are wonderful with fantastic raindrops falling from the sky and the loudspeakers throughout the city that emit the terrifying and disgusting voice of the High Chancellor that gives way to a fully immersive experience. The elegant classical score sounds excellent as well and the dialogue is cleanly presented and free of any audio issues. This is a grande Dolby Atmos track. 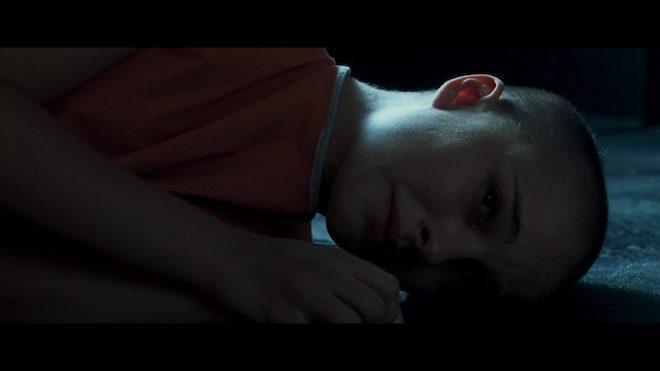 There are about 120 minutes of bonus features included on this 4K release with the inclusion of about 54 minutes of new material, including a very rare interview with one of the Wachowskis. There are some audition tapes of Portman and a ton of interviews with the cast and crew discussing the film. The previous extras are imported over here. The top three bonus features are placed on the 4K Disc where the rest of the extras can be viewed on the Blu-ray version. These are all worth the time. 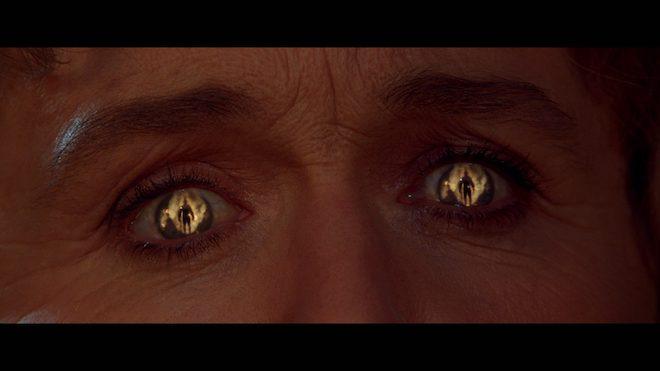 V For Vendetta is still a wonderful, scary, and violent film with some important and significant messages about freedom, fairness, and justice that are very relevant today. The movie holds up on all levels some fifteen years later. Warner Bros.'s new 4K UHD transfer with HDR10 looks impressive, the Dolby Atmos track is wonderful and loud, and the new bonus features that have been added are quite worthwhile. Highly Recommended!